Civil Rights in an Affluent Society 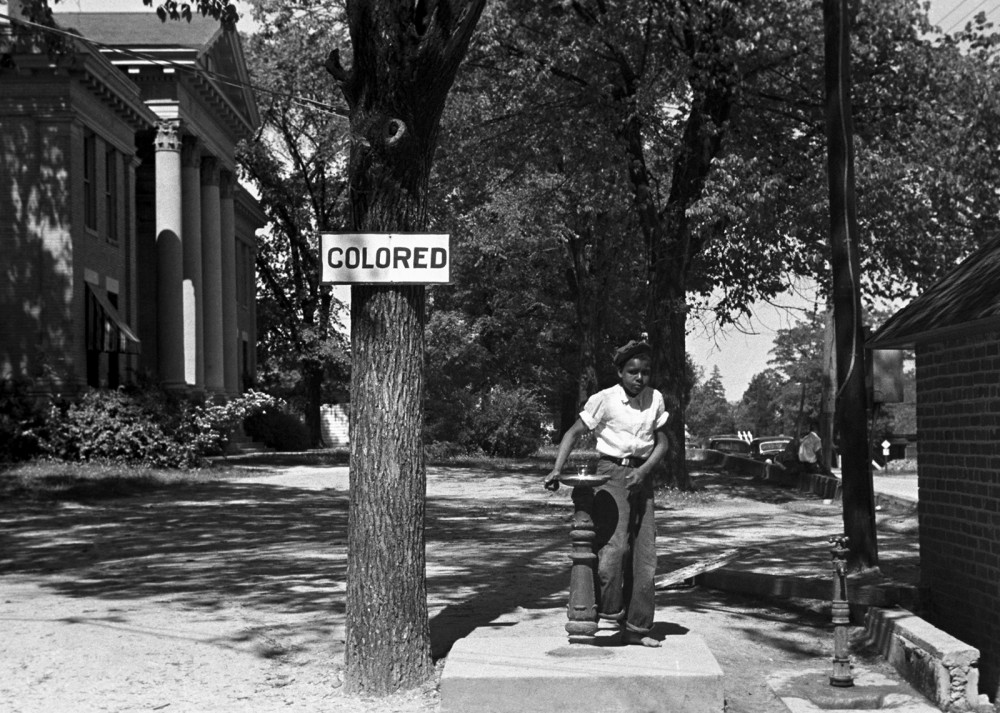 Segregation extended beyond private business property; this segregated drinking fountain was located on the ground of the Halifax county courthouse in North Carolina. Photograph, April 1938. Wikimedia.

Education was but one aspect of the nation’s Jim Crow machinery. African Americans had been fighting against a variety of racist policies, cultures and beliefs in all aspects of American life. And while the struggle for black inclusion had few victories before World War II, the war and the “Double V” campaign as well as the postwar economic boom led to rising expectations for many African Americans. When persistent racism and racial segregation undercut the promise of economic and social mobility, African Americans began mobilizing on an unprecedented scale against the various discriminatory social and legal structures.

While many of the civil rights movement’s most memorable and important moments, such as the sit-ins freedom rides and especially the March on Washington, occurred in the 1960s, the 1950s were a significant decade in the sometimes-tragic, sometimes-triumphant march of civil rights in the United States. In 1953, years before Rosa Parks’ iconic confrontation on a Montgomery city bus, an African American woman named Sarah Keys publicly challenged segregated public transportation. Keys, then serving in the Women’s Army Corps, traveled from her army base in New Jersey back to North Carolina to visit her family. When the bus stopped in North Carolina, the driver asked her to give up her seat for a white customer. Her refusal to do so landed her in jail in 1953 and led to a landmark 1955 decision, Sarah Keys v. Carolina Coach Company, in which the Interstate Commerce Commission ruled that “separate but equal” violated the Interstate Commerce Clause of the U.S. Constitution. Poorly enforced, it nevertheless gave legal coverage for the freedom riders years later. Moreover, it was a morale-building decision. Six days after the decision was announced, Rosa Parks refused to give up her seat in Montgomery.

But if some events encouraged civil rights workers with the promise of progress, others were so savage they convinced activists that they could do nothing but resist. In the summer of 1955, two white men in Mississippi kidnapped and brutally murdered a fourteen-year-old boy Emmett Till. Till, visiting from Chicago and perhaps unfamiliar with the etiquette of Jim Crow, allegedly whistled at a white woman named Carolyn Bryant. Her husband, Roy Bryant, and another man, J.W. Milam, abducted Till from his relatives’ home, beat him, mutilated him, shot him, and threw his body in the Tallahatchie River. But the body was found. Emmett’s mother held an open-casket funeral so that Till’s disfigured body could make national news. The men were brought to trial. The evidence was damning, but an all-white jury found the two not guilty. Only months after the decision the two boasted of their crime in Look magazine. For young black men and women soon to propel the civil rights movement, the Till case was an indelible lesson.

Four months after Till’s death, Rosa Parks refused to surrender her seat on a Montgomery city bus. Her arrest launched the Montgomery bus boycott, a foundational moment in the civil rights crusade. Montgomery’s public transportation system had longstanding rules that required African American passengers to sit in the back of the bus and give up their seats to white passengers when the buses filled. Parks refused to move on December 1, 1955 and was arrested. She was not the first to protest against the policy by staying seated on a Montgomery bus, but she was the woman around whom Montgomery activists rallied a boycott around.

Soon after Parks’ arrest, Montgomery’s black population, organized behind the recently arrived Baptist minister Martin Luther King Jr. and formed the Montgomery Improvement Association (MIA) to coordinate a widespread boycott. During December 1955 and all of 1956, King’s leadership sustained the boycott and thrust him into the national spotlight. The Supreme Court ruled against Montgomery and on December 20, 1956 King brought the boycott to a successful conclusion, ending segregation on Montgomery’s public transportation and establishing his reputation as a national leader in African American efforts for equal rights.

Motivated by the success of the Montgomery boycott, King and other African American leaders looked for ways to continue the fight. In 1957, King helped create the Southern Christian Leadership Conference (SCLC). Unlike the MIA, which targeted one specific policy in one specific city, the SCLC was a coordinating council to helping civil rights groups across the South coordinate and sustain boycotts, protests, and assaults on southern Jim Crow laws.

As pressure built, congress passed the Civil Rights Act of 1957, the first such measure passed since Reconstruction. Although the act was nearly compromised away to nothing, although it achieved some gains, such as creating the Civil Rights Commission in the Department of Justice to investigate claims of racial discrimination, it nevertheless signaled that pressure was finally mounting for Americans to finally confront the racial legacy of slavery and discrimination.

Despite successes at both the local and national level, the civil rights movement faced bitter opposition. Those opposed to the movement often used violent tactics to scare and intimidate African Americans and subvert legal rulings and court orders. For example, a year into the Montgomery bus boycott, angry white southerners bombed four African American churches as well as the homes of King and fellow civil rights leader E. D. Nixon. Though King, Nixon and the MIA persevered in the face of such violence, it was only a taste of things to come. Such unremitting hostility and violence left the outcome of the burgeoning civil rights movement in doubt. Despite its successes, civil rights activists looked back on the 1950s as a decade of at best mixed results and incomplete accomplishments. While the bus boycott, Supreme Court rulings and other civil rights activities signaled progress, church bombings, death threats, and stubborn legislators demonstrated the distance that still needed to be traveled.