Gender and Culture in the Affluent Society 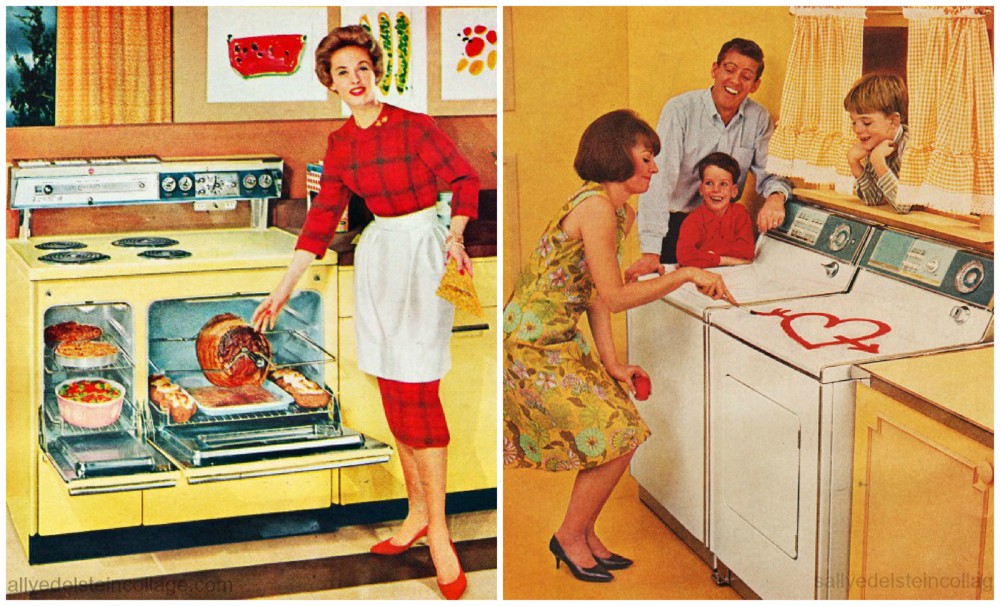 New inventions to make housework easier and more fun for women proliferated in the post-war era, creating an advertising and marketing frenzy to attract female consumers to certain products. Envisioning the American Dream.

America’s consumer economy reshaped how Americans experienced culture and shaped their identities. The Affluent Society gave Americans new experiences, new outlets, and new ways to understand and interact with one another.

“The American household is on the threshold of a revolution,” the New York Times declared in August 1948. “The reason is television.” A distinct post-war phenomenon, television was actually several years in the making before it transformed postwar American culture. Presented to the American public at New York World’s Fair in 1939, the commercialization of television in the United States lagged during the war year. In 1947, though, regular full-scale broadcasting became available to the public. Television was instantly popular, so much so that by early 1948 Newsweekreported that it was “catching on like a case of high-toned scarlet fever.” Indeed, between 1948 and 1955 close to two-thirds of the nation’s households purchased a television set. By the end of the 1950s, 90 percent of American families had one and the average viewer was tuning in for almost 5 hours a day.

The technological ability to transmit images via radio waves gave birth to television. Television borrowed radio’s organizational structure, too. The big radio broadcasting companies, NBC, CBS, and ABC, used their technical expertise and capital reserves to conquer the airwaves. They acquired licenses to local stations and eliminated their few independent competitors. The Federal Communication Commission’s (FCC) refusal to issue any new licenses between 1948 and 1955 was a de facto endorsement of the big three’s stranglehold on the market.

In addition to replicating radio’s organizational structure, television also looked to radio for content. Many of the early programs were adaptations of popular radio variety and comedy shows, including the Ed Sullivan Show and Milton Berle’s Texaco Star Theater. These were accompanied by live plays, dramas, sports, and situation comedies. Due to the cost and difficulty of recording, most programs were broadcast live, forcing stations across the country to air shows at the same time. And since audiences had a limited number of channels to choose from, viewing experiences were broadly shared. Upwards of two thirds of television-owning households, for instance, watched popular shows such as I Love Lucy.

The limited number of channels and programs meant that networks selected programs that appealed to the widest possible audience to draw viewers and, more importantly, television’s greatest financers: advertisers. By the mid-1950s, an hour of primetime programming cost about $150,000 (about $1.5 million in today’s dollars) to produce. This proved too expensive for most commercial sponsors, who began turning to a joint financing model of 30-second spot ads. The commercial need to appeal to as many people as possible promoted the production of shows aimed at the entire family. Programs such as Father Knows Best and Leave it to Beaver featured light topics, humor, and a guaranteed happy ending the whole family could enjoy. 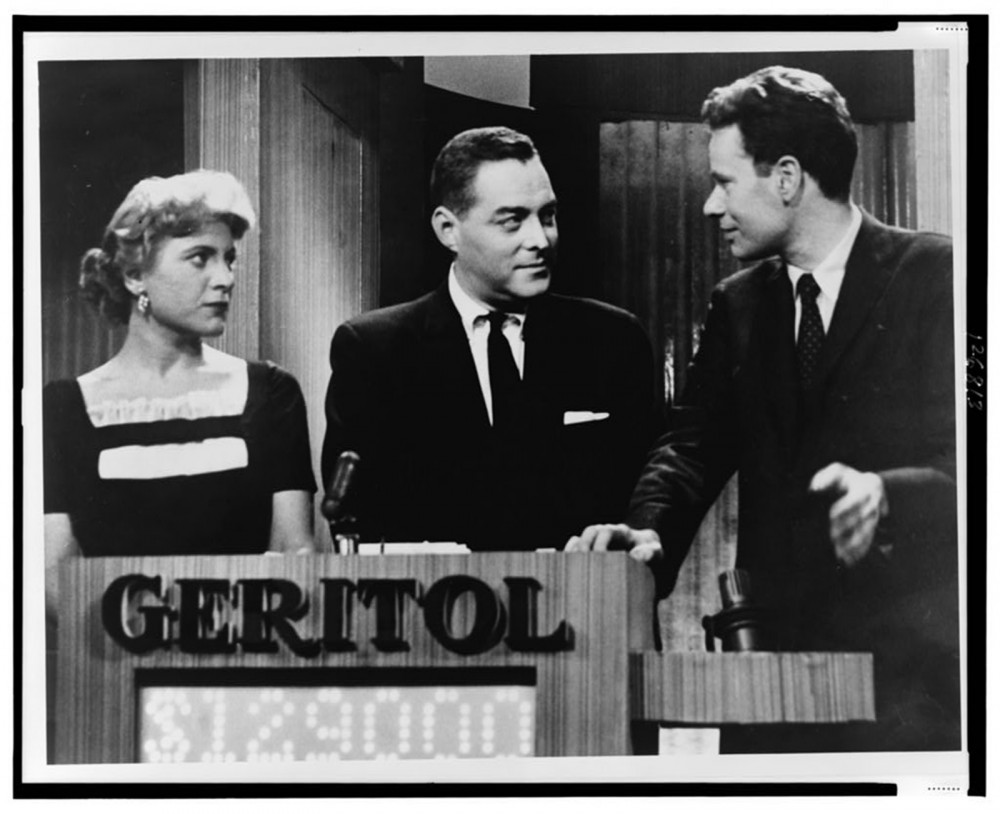 Advertising began creeping up everywhere in the 1950s. No longer confined to commercials or newspapers, advertisements were subtly (or not so subtly in this case) worked into TV shows like the Quiz Show “21”. (Geritol is a dietary supplement.) Orlando Fernandez, “[Quiz show “21” host Jack Barry turns toward contestant Charles Van Doren as fellow contestant Vivienne Nearine looks on],” 1957. Library of Congress.

Television’s broad appeal, however, was about more than money and entertainment. Shows of the 1950s, such as Father Knows Best and I Love Lucy, depicted a decade that extolled the nuclear family, adhered to “traditional” gender roles, and embraced white, middle-class domesticity.Leave It to Beaver centered on the breadwinner-father and homemaker-mother guiding their children through life lessons. Cold War American culture idealized the so-called “nuclear family.” There was a societal consensus that such a lifestyle was not only beneficial, but the most effective way to safeguard American prosperity against deviancy and communist threats.The marriage of the suburban consumer culture and Cold War security concerns facilitated, and in turn was supported by, the ongoing postwar baby boom. From 1946 to 1964, American fertility experienced an unprecedented spike. A century of declining birth rates abruptly reversed. Although popular memory credits the cause of the baby boom to the return of virulent soldiers from battle, the real story is more nuanced. After years of economic depression families were now wealthy enough to support larger families and had homes large enough to accommodate them, while women married younger and American culture celebrated the ideal of a large, insular family.Underlying this “reproductive consensus” was the new cult of professionalism that pervaded postwar American culture, including the professionalization of homemaking. Mothers and fathers alike flocked to the experts for their opinions on marriage, sexuality, and, most especially, child-rearing. Psychiatrists held an almost mythic status as people took their opinions and prescriptions, as well as their vocabulary, into their everyday life. Books like Dr. Spock’s Baby and Child Care (1946) were diligently studied by women who took their careers as house-wife as just that: a career, complete with all the demands and professional trappings of job development and training. And since most women had multiple children roughly the same age as their neighbors’, a cultural obsession with kids flourished throughout the decade. Women bore the brunt of this pressure, chided if they did not give enough of their time to the children—especially if it was at the expense of a career—yet cautioned that spending too much time would lead to “Momism,” producing “sissy” boys who would be incapable of contributing to society and extremely susceptible to the communist threat.A new youth culture exploded in American popular culture. On the one hand, the anxieties of the atomic age hit America’s youth particularly hard. Keenly aware of the discontent bubbling beneath the surface of the Affluent Society, for instance, many youth embraced rebellion. The 1955 film Rebel Without a Cause demonstrates the restlessness and emotional incertitude of the postwar generation, highlighting both the affluence of their lifestyle and the lack of satisfaction they derived from it. At the same time, perhaps yearning for something beyond the “massification” of American culture but having few other options beyond popular culture, American youth turned to rock ‘n’ roll. They listened to Little Richard, Buddy Holly, and especially Elvis Presley (whose hip movement alone was seen as culturally subversive). 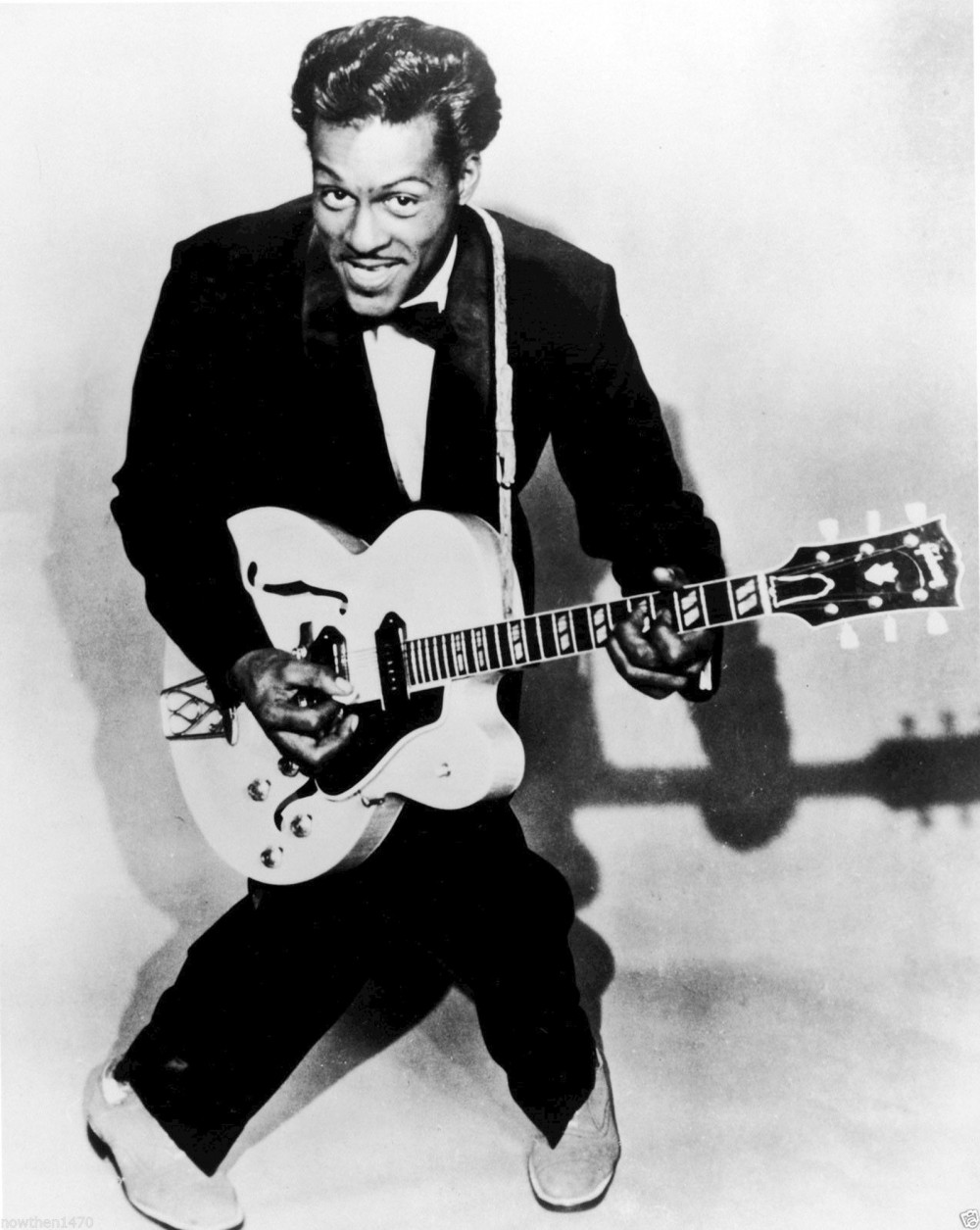 While an accepted part of culture in the twenty-first century, Rock and Roll music was seen by many as devilish, having a corruptive influence on the youth of America. Chuck Berry defined the rhythm and style that made Rock and Roll so distinctive and irresistible. Publicity photo, c, 1971. Wikimedia.

The popularity of rock and roll, which emerged in the postwar years, had not yet blossomed into the countercultural musical revolution of the coming decade, but it provided a magnet for teenage restlessness and rebellion. “Television and Elvis,” the musician Bruce Springsteen would recollect, “gave us full access to a new language, a new form of communication, a new way of being, a new way of looking, a new way of thinking; about sex, about race, about identity, about life; a new way of being an American, a human being; and a new way of hearing music.” American youth had seen so little of Elvis’ energy and sensuality elsewhere in their culture. “Once Elvis came across the airwaves,” Springsteen said, “once he was heard and seen in action, you could not put the genie back in the bottle. After that moment, there was yesterday, and there was today, and there was a red hot, rockabilly forging of a new tomorrow, before your very eyes.” 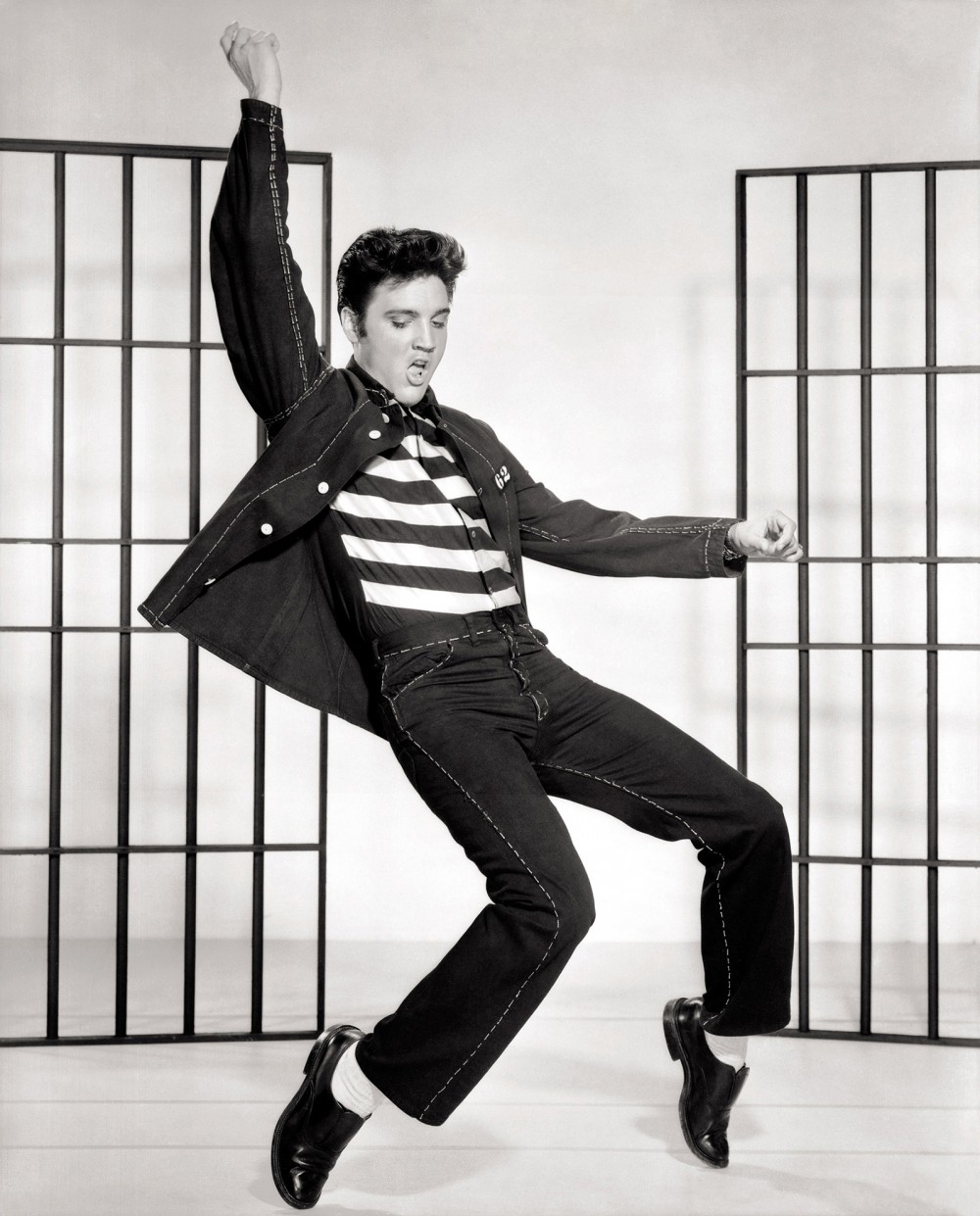 While black musicians like Chuck Berry created Rock and Roll, it was brought into the mainstream (white) American culture through performers like Elvis. His good looks, sensual dancing, and sonorous voice stole the hearts of millions of American teenage girls, which was at that moment becoming a central segment of the consumer population. Wikimedia.

But while the Affluent Society the pressure to conform was intense, many Americans in the 1950s took larger steps to reject conformity and domesticity. The writers of the Beat Generation expressed their disillusionment with capitalism, consumerism, and traditional gender roles by seeking a deeper meaning in life. Beats traveled across the country, studied Eastern religions, and experimented with drugs and sex and artistic form.

Behind the scenes, Americans were challenging sexual mores. The gay rights movement, for instance, stretched back into the Affluent Society. While the country proclaimed homosexuality a mental disorder, gay men established the Mattachine Society in Los Angeles and gay women formed the Daughters of Bilitis in San Francisco as support groups. They held meetings, distributed literature, provided legal and counseling services, and formed chapters across the country. Much of their work, however, remained secretive because homosexuals risked arrest and abuse, if discovered.

Society’s “consensus,” on everything from the consumer economy to gender roles, did not go unchallenged. Much discontent was channeled through the machine itself: advertisers sold rebellion no less than they sold baking soda. And yet others were rejecting the old ways, choosing new lifestyles, challenging old hierarchies, and embarking upon new paths.