Herbert Hoover and the Politics of the Depression 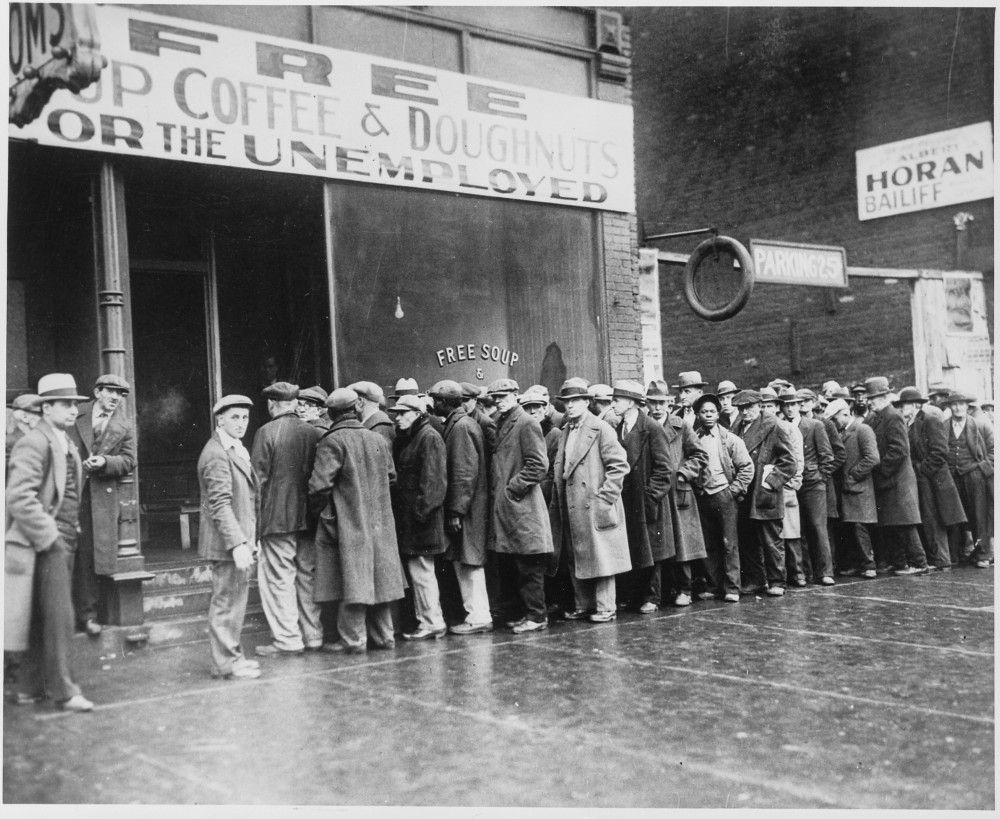 As the Depression spread, public blame settled on President Herbert Hoover and the conservative politics of the Republican Party. But Hoover was as much victim as perpetrator, a man who had the misfortune of becoming a visible symbol for large invisible forces. In 1928 Hoover had no reason to believe that his presidency would be any different than that of his predecessor, Calvin Coolidge, whose time in office was marked by relative government inaction, seemingly rampant prosperity, and high approval ratings.

Coolidge had decided not to seek a second term in 1928. A man of few words, “Silent Cal” publicized this decision by handing a scrap of paper to a reporter that simply read: “I do not choose to run for president in 1928.” The race therefore became a contest between the Democratic governor of New York, Al Smith, whose Catholic faith and immigrant background aroused nativist suspicions and whose connections to Tammany Hall and anti-Prohibition politics offended reformers, and the Republican candidate, Herbert Hoover, whose All-American, Midwestern, Protestant background and managerial prowess during the First World War endeared him to American voters.

Hoover epitomized the “self-made man.” Orphaned at age 9, he was raised by a strict Quaker uncle on the West Coast. He graduated from Stanford University in 1895 and worked as an engineer for several multinational mining companies. He became a household name during World War I when he oversaw voluntary rationing as the head of the U.S. Food Administration and, after the armistice, served as the Director General of the American Relief Association in Europe. Hoover’s reputation for humanitarian service and problem-solving translated into popular support, even as the public soured on Wilson’s Progressive activism. Hoover was one of the few politicians whose career benefitted from wartime public service. After the war both the Democratic and Republican parties tried to draft him to run for president in 1920.

Hoover declined to run in 1920 and 1924. He served instead as Secretary of Commerce under both Harding and Coolidge, taking an active role in all aspects of government. In 1928, he seemed the natural successor to Coolidge. Politically, aside from the issue of Prohibition (he was a “dry,” Smith a “wet”), Hoover’s platform differed very little from Smith’s, leaving little to discuss during the campaign except personality and religion. Both benefitted Hoover. Smith’s background engendered opposition from otherwise solid Democratic states, especially in the South, where his Catholic, ethnic, urban, and anti-Prohibition background were anathema. His popularity among urban ethnic voters counted for little. Several southern states, in part owing to the work of itinerant evangelical politicking, voted Republican for the first time since Reconstruction. Hoover won in a landslide, taking nearly 60% of the popular vote.

Although Hoover is sometimes categorized as a “business president” in line with his Republican predecessors, he also embraced an inherent business progressivism, a system of voluntary action called “Associationalism” that assumed Americans could maintain a web of voluntary cooperative organizations dedicated to providing economic assistance and services to those in need. Businesses, the thinking went, would willingly limit harmful practice for the greater economic good. To Hoover, direct government aid would discourage a healthy work ethic while Associationalism would encourage the very self-control and self-initiative that fueled economic growth. But when the Depression exposed the incapacity of such strategies to produce an economic recovery, Hoover proved insufficiently flexible to recognize the limits of his ideology. And when the ideology failed, so too did his presidency.

Hoover entered office upon a wave of popular support, but by October 1929 the economic collapse had overwhelmed his presidency. Like all too many Americans, Hoover and his advisers assumed—or perhaps simply hoped—that the sharp financial and economic decline was a temporary downturn, another “bust” of the inevitable boom-bust cycles that stretched back through America’s commercial history. Many economists argued that periodic busts culled weak firms and paved the way for future growth. And so when suffering Americans looked to Hoover for help, Hoover could only answer with volunteerism. He asked business leaders to promise to maintain investments and employment and encouraged state and local charities to provide assistance to those in need. Hoover established the President’s Organization for Unemployment Relief, or POUR, to help organize the efforts of private agencies. While POUR urged charitable giving, charitable relief organizations were overwhelmed by the growing needs of the many multiplying unemployed, underfed, and unhoused Americans. By mid-1932, for instance, a quarter of all of New York’s private charities closed: they had simply run out of money. In Atlanta, solvent relief charities could only provide $1.30 per week to needy families. The size and scope of the Depression overpowered the radically insufficient capacity of private volunteer organizations to mediate the crisis.

By 1932, with the economy long-since stagnant and a reelection campaign looming, Hoover, hoping to stimulate American industry, created the Reconstruction Finance Corporation to provide emergency loans to banks, building-and-loan societies, railroads, and other private industries. It was radical in its use of direct government aid and out of character for the normally laissez-faire Hoover, but it also bypassed needy Americans to bolster industrial and financial interests. New York Congressman Fiorello LaGuardia, who later served as mayor of New York City, captured public sentiment when he denounced the RFC as a “millionaire’s dole.”