Introduction to the American Empire 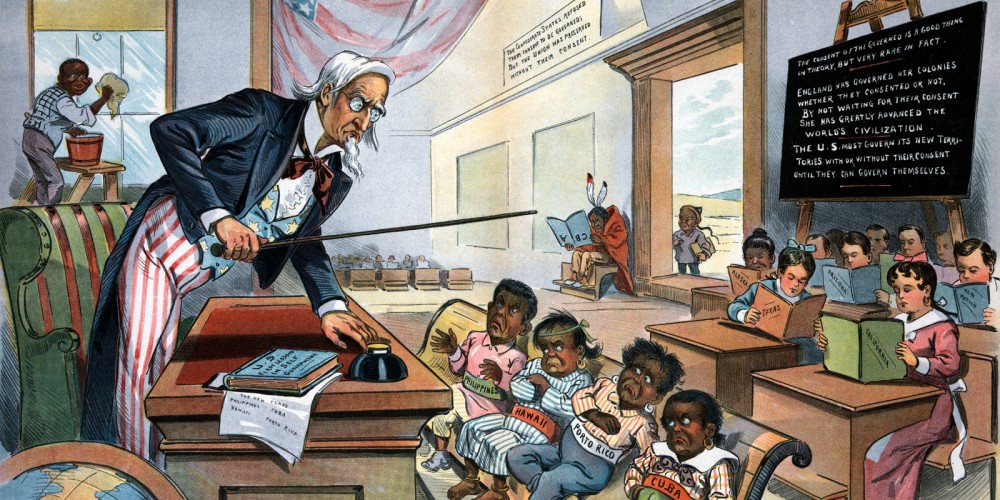 “Empire” might most readily recall ancient Rome, military conquests, the British Empire, the mercantile capitalism of the British East India Company, the partitioning of Africa or the Middle East into colonies, military and administrative occupations, resource exploitation, and generally a model in which some central power exploits peripheral colonies to advance its own interests. But empires can take many forms, and imperial processes can occur in many contexts. 100 years after the United States won its independence from the British Empire, had it become an empire of its own?

In the decades after the American Civil War, the United States exerted itself in the service of American interests around the world. In the Pacific, Latin America, and the Middle East, and most explicitly in the Spanish-American War and the foreign policy of Theodore Roosevelt and William Howard Taft, the United States expanded upon a long history of exploration, trade, and cultural exchange to practice something new, something that looked much like empire. The question of American imperialism, then, seeks to understand not only direct American interventions in such places as Cuba, the Philippines, Hawaii, Guam, and Puerto Rico, but also the deeper history of American engagement with the wider world, and the subsequent ways in which American economic, political, and cultural power has shaped the actions, choices, and possibilities of other groups and nations.

But as American exerted itself abroad, it received ever more numbers of foreign peoples at home. European and Asian immigrants poured into the United States. In a sense, imperialism and immigration raised similar questions about American identity: who was an “American,” and who wasn’t? What was the nation’s obligations to foreign powers and foreign peoples? And how accessible –and how fluid—should American identity be for newcomers? All such questions confronted late-nineteenth-century Americans with unprecedented urgency.