In 1911 the Triangle Shirtwaist factory in Manhattan caught fire. The doors of the factory had been chained shut to prevent employees from taking unauthorized breaks (the managers who held the keys saved themselves, but left over 200 women behind). A rickety fire ladder on the side of the building collapsed immediately. Women lined the rooftop and windows of the ten story building and jumped, landing in a “mangled, bloody pulp.” Life nets held by firemen tore at the impact of the falling bodies. Among the onlookers, “women were hysterical, scores fainted; men wept as, in paroxysms of frenzy, they hurled themselves against the police lines.” By the time the fire burned itself out 71 workers were injured and 146 had died. 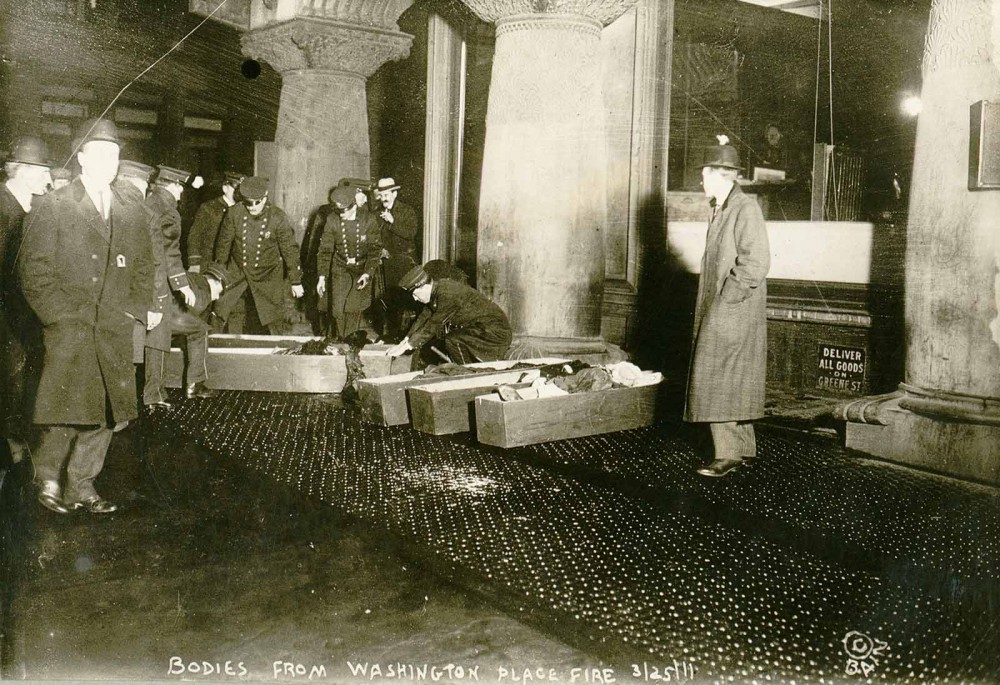 Photographs like this one made real the potential atrocities resulting from unsafe working conditions, as policemen place the bodies of workers burnt alive in the 1911 Triangle Shirtwaist fire into coffins. “Bodies from Washington Place fire, Mar 1911,” March 25, 1911. Library of Congress.

A year before, the Triangle workers had gone out on strike demanding union recognition, higher wages, and better safety conditions. Remembering their workers’ “chief value,” the owners of the factory decided that a viable fire escape and unlocked doors were too expensive and called in the city police to break up the strike. After the 1911 fire, reporter Bill Shepherd reflected, “I looked upon the heap of dead bodies and I remembered these girls were shirtwaist makers. I remembered their great strike last year in which the same girls had demanded more sanitary conditions and more safety precautions in the shops. These dead bodies were the answer.” Former Triangle worker and labor organizer Rose Schneiderman said, “This is not the first time girls have been burned alive in this city. Every week I must learn of the untimely death of one of my sister workers… the life of men and women is so cheap and property is so sacred! There are so many of us for one job, it matters little if 140-odd are burned to death.” After the fire Triangle owners Max Blanck and Isaac Harris were brought up on manslaughter charges. They were acquitted after less than two hours of deliberation. The outcome continued a trend in the industrializing economy that saw workers’ deaths answered with little punishment of the business owners responsible for such dangerous conditions. But as such tragedies mounted and working and living conditions worsened and inequality grew, it became increasingly difficult to develop justifications for this new modern order.

Events such as the Triangle Shirtwaist fire convinced many Americans of the need for reform, but the energies of activists were needed to spread a new commitment to political activism and government interference in the economy. Politicians, journalists, novelists, religious leaders, and activists all raised their voices to push Americans toward reform.

Reformers turned to books and mass-circulation magazines to publicize the plight of the nation’s poor and the many corruptions endemic to the new industrial order. Journalists who exposed business practices, poverty, and corruption—labeled by Theodore Roosevelt as “Muckrakers”— aroused public demands for reform. Magazines such as McClure’s detailed political corruption and economic malfeasance. The Muckrakers confirmed Americans’ suspicions about runaway wealth and political corruption. Ray Stannard Baker, a journalist whose reports on United States Steel exposed the underbelly of the new corporate capitalism, wrote, “I think I can understand now why these exposure articles took such a hold upon the American people. It was because the country, for years, had been swept by the agitation of soap-box orators, prophets crying in the wilderness, and political campaigns based upon charges of corruption and privilege which everyone believed or suspected had some basis of truth, but which were largely unsubstantiated.”

Journalists shaped popular perceptions of Gilded Age injustice. In 1890, New York City journalist Jacob Riis published How the Other Half Lives, a scathing indictment of living and working conditions in the city’s slums. Riis not only vividly described the squalor he saw, he documented it with photography, giving readers an unflinching view of urban poverty. Riis’s book led to housing reform in New York and other cities, and helped instill the idea that society bore at least some responsibility for alleviating poverty. In 1906, Upton Sinclair published The Jungle, a novel dramatizing the experiences of a Lithuanian immigrant family who moved to Chicago to work in the Stock Yards. Although Sinclair intended the novel to reveal the brutal exploitation of labor in the meatpacking industry, and thus to build support for the socialist movement, its major impact was to lay bare the entire process of industrialized food production. The growing invisibility of slaughterhouses and livestock production for urban consumers had enabled unsanitary and unsafe conditions. “The slaughtering machine ran on, visitors or no visitors,” wrote Sinclair, “like some horrible crime committed in a dungeon, all unseen and unheeded, buried out of sight and of memory.” Sinclair’s exposé led to the passage of the Meat Inspection Act and Pure Food and Drug Act in 1906. 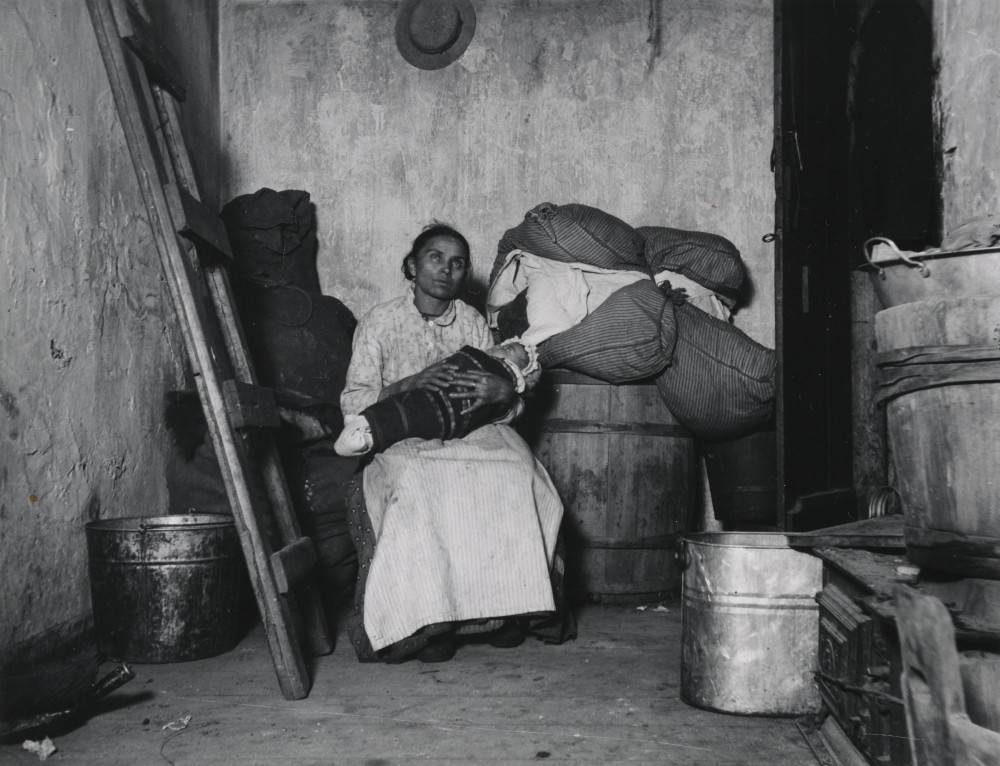 “Home of an Italian Ragpicker.” Via Preus Museum

Of course, it was not only journalists who raised questions about American society. One of the most popular novels of the nineteenth century, Edward Bellamy’s 1888 Looking Backward, was a national sensation. In it, a man falls asleep in Boston in 1887 and awakens in 2000 to find society radically altered. Poverty and disease and competition gave way as new industrial armies cooperated to build a utopia of social harmony and economic prosperity. Bellamy’s vision of a reformed society enthralled readers, inspired hundreds of Bellamy clubs, and pushed many young readers onto the road to reform.

“I am aware that you called yourselves free in the nineteenth century. The meaning of the word could not then, however, have been at all what it is at present, or you certainly would not have applied it to a society of which nearly every member was in a position of galling personal dependence upon others as to the very means of life, the poor upon the rich, or employed upon employer, women upon men, children upon parents.”

But Americans were urged to action not only by books and magazines but by preachers an theologians, too. Confronted by both the benefits and the ravages of industrialization, many Americans asked themselves, “What Would Jesus Do?” In 1896 Charles Sheldon, a Congregational minister in Topeka, Kansas, published In His Steps: What Would Jesus Do? The novel told the story of Henry Maxwell, a pastor in a small Midwestern town one day confronted by an unemployed migrant who criticized his congregation’s lack of concern for the poor and downtrodden. Moved by the man’s plight, Maxwell preached a series of sermons in which he asked his congregation: “Would it not be true, think you, that if every Christian in America did as Jesus would do, society itself, the business world, yes, the very political system under which our commercial and government activity is carried on, would be so changed that human suffering would be reduced to a minimum?” Sheldon’s novel became a best seller, not only because of its story but because the book’s plot connected with a new movement transforming American religion: the social gospel.

The social gospel emerged within Protestant Christianity at the end of the nineteenth century. It emphasized the need for Christians to be concerned for the salvation of society, and not simply individual souls. Instead of just caring for family or fellow church members, social gospel advocates encouraged Christians to engage society, challenge social, political, and economic structures, and help those less fortunate than themselves. Responding to the developments of the industrial revolution in America and the increasing concentration of people in urban spaces, with its attendant social and economic problems, some social gospelers went so far as to advocate a form of Christian socialism, but all urged Americans to confront the sins of their society.

One of the most notable advocates of the social gospel was Walter Rauschenbusch. After graduating from Rochester Theological Seminary, in 1886 Rauschenbusch accepted the pastorate of a German Baptist church in the Hell’s Kitchen section of New York City, where he was confronted by rampant crime and stark poverty, problems not adequately addressed by the political leaders of the city. Rauschenbusch joined with fellow reformers to elect a new mayoral candidate, but he also realized that a new theological framework had to reflect his interest in society and its problems. He revived Jesus’ phrase, “the Kingdom of God,” claiming that it encompassed every aspect of life and made every part of society a purview of the proper Christian. Like Charles Sheldon’s Rev. Maxwell, Rauschenbusch believed that every Christian, whether they were a businessperson, a politician, or stay-at-home parent, should ask themselves what they could to enact the kingdom of God on Earth.

“The social gospel is the old message of salvation, but enlarged and intensified. The individualistic gospel has taught us to see the sinfulness of every human heart and has inspired us with faith in the willingness and power of God to save every soul that comes to him. But it has not given us an adequate understanding of the sinfulness of the social order and its share in the sins of all individuals within it. It has not evoked faith in the will and power of God to redeem the permanent institutions of human society from their inherited guilt of oppression and extortion. Both our sense of sin and our faith in salvation have fallen short of the realities under its teaching. The social gospel seeks to bring men under repentance for their collective sins and to create a more sensitive and more modern conscience. It calls on us for the faith of the old prophets who believed in the salvation of nations.”

—Walter Rauschenbush, A Theology For The Social Gospel, 1917

Glaring blindspots persisted within the proposals of most social gospel advocates. As men, they often ignored the plight of women and thus most refused to support women’s suffrage. Many were also silent on the plight of African Americans, Native Americans, and other oppressed minority groups. However, Rauschenbusch and other social gospel proponents’ writings would have a profound influence upon twentieth-century American life, not only most immediately in progressive reform but later, too, inspiring Martin Luther King, Jr., for instance, to envision a “beloved community” that resembled Rauschenbusch’s “Kingdom of God.”