In the early years of the war, Americans were generally detached from the events in Europe. The population paired their horror of war accounts with gratitude for the economic opportunities provided by the war and pride in a national tradition of non-involvement with the kind of entangling alliances that had caused the current war. Progressive Era reform politics dominated the political landscape, and Americans remained most concerned with domestic issues and the shifting role of government at home. However, the facts of the war could not be ignored by the public. The destruction taking place on European battlefields and the ensuing casualty rates indicated the unprecedented brutality of modern warfare. Increasingly, a sense that the fate of the Western world lay in the victory or defeat of the Allies.

President Wilson, a committed progressive, had articulated a global vision of democracy even as he embraced neutrality. And as war continued to engulf Europe, it seemed apparent that the United States’ economic power would shape the outcome of the conflict regardless of any American military intervention. By 1916, American trade with the Allies tripled while trade with the Central Powers shrunk astronomically, to less than one percent of previous levels. 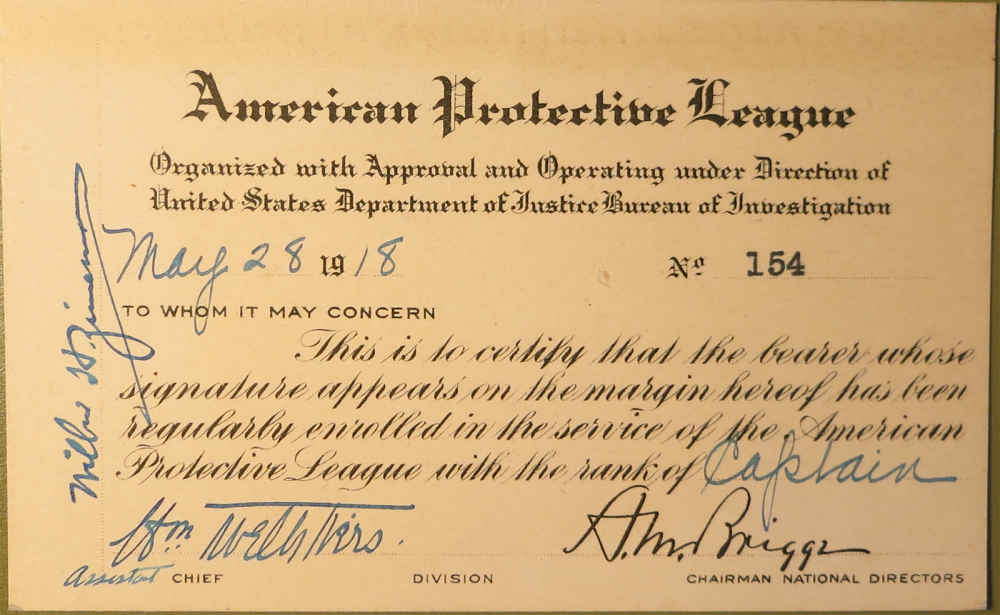 The large numbers of German immigrants living throughout the United States created suspicion within the federal government. The American Protective League, a group of private citizens, worked directly with the U.S. government during WWI to identify suspected German sympathizers. Additionally, they sought to eradicate all radical, anarchical, left-wing, and anti-war activities through surveillance and raids. Even Herbert Hoover, the infamous head of the FBI, used the APL to gather intelligence. A membership card in the American Protective League, issued 28 May 1918. Wikimedia.

The progression of the war in Europe generated fierce national debates about military preparedness. The Allies and the Central Powers had taken little time to raise and mobilize vast armies and navies. By comparison, the United States still fielded a miniscule army and had limited federal power to summon an adequate defense force before the enactment of conscription. When America entered the war, mobilization of military resources and the cultivation of popular support for the war consumed the country. Because the federal government had lacked the coercive force to mobilize before the war, the American war effort was marked by enormous publicity and propaganda campaigns. President Wilson went to extreme measures to push public opinion towards the war. Most notably, he created the Committee on Public Information, known as the “Creel Committee,” headed by Progressive George Creel, to enflame the patriotic mood of the country and generate support for military adventures abroad. Creel enlisted the help of Hollywood studios and other budding media outlets to cultivate a view of the war that pit democracy against imperialism, that framed America as crusading nation endeavoring to rescue Western civilization from medievalism and militarism. As war passions flared, challenges to the onrushing patriotic sentiment that America was making the world “safe for democracy” were labeled disloyal. Wilson signed the Espionage Act in 1917 and the Sedition Act in 1918, stripping dissenters and protestors of their rights to publicly resist the war. Critics and protestors were imprisoned. Immigrants, labor unions, and political radicals became targets of government investigations and an ever more hostile public culture. Meanwhile, the government insisted that individual financial contributions made a discernible difference for the men on the Western Front. Americans lent their financial support to the war effort by purchasing war bonds or supporting Liberty Loan Drive. Many Americans, however, sacrificed much more than money.