In the decades after the Civil War, Americans poured across the Mississippi River in record numbers. No longer simply crossing over the continent for new imagined Edens in California or Oregon, they settled now in the vast heart of the continent.

Many of the first American migrants had come to the West in search of quick profits during the mid-century gold and silver rushes. As in the California rush of 1848–49, droves of prospectors poured in after precious-metal strikes in Colorado in 1858, Nevada in 1859, Idaho in 1860, Montana in 1863, and the Black Hills in 1874. While women often performed housework that allowed mining families to subsist in often difficult conditions, a significant portion of the mining workforce were single men without families dependent on service industries in nearby towns and cities. There, working-class women worked in shops, saloons, boarding houses, and brothels. It was often these ancillary operations that profited from the mining boom: as failed prospectors often found, the rush itself often generated more wealth than the mines. The gold that left Colorado in the first seven years after the Pike’s Peak gold strike—estimated at $25.5 million—was, for instance, less than half of what outside parties had invested in the fever and the 100,000-plus migrants who settled in the Rocky Mountains were ultimately more valuable to the region’s development than the gold they came to find.

Others came to the Plains to extract the hides of the great bison herds. Millions of animals had roamed the Plains, but their tough leather supplied industrial belting in eastern factories and raw material for the booming clothing industry. Specialized teams took down and skinned the herds. The infamous American bison slaughter peaked in the early 1870s. The number of American bison plummeted from over 10 million at mid-century to only a few hundred by the early 1880s. The expansion of the railroads would allow ranching to replace the bison with cattle on the American grasslands. 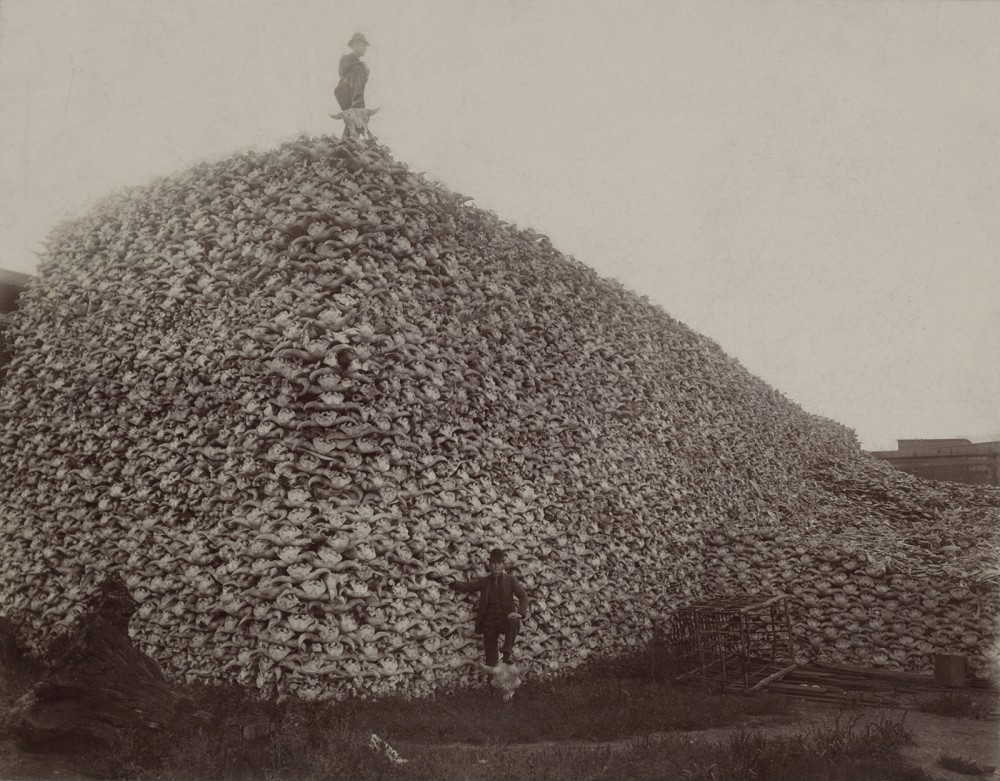 While bison supplied leather for America’s booming clothing industry, the skulls of the animals also provided a key ingredient in fertilizer. This 1870s photograph illustrates the massive number of bison killed for these and other reasons (including sport) in the second half of the nineteenth century. Photograph of a pile of American bison skulls waiting to be ground for fertilizer, 1870s. Wikimedia.

It was land, ultimately, that drew the most migrants to the West. Family farms were the backbone of the agricultural economy that expanded in the West after the Civil War. In 1862, northerners in Congress passed the Homestead Act, allowed male citizens (or those who declared their intent to become citizens) to claim federally-owned lands in the West. Settlers could head west, choose a 160 acre surveyed section of land, file a claim, and begin “improving” the land by plowing fields, building houses and barns, or digging wells, and, after five years of living on the land, could apply for the official title deed to the land. Hundreds of thousands of Americans used the Homestead Act to acquire land. The treeless plains that had been considered unfit for settlement became the new agricultural mecca for land-hungry Americans. 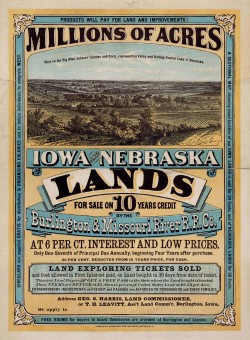 This 1872 land advertisement for Iowa and Nebraska underscores what was the most important driving force for western migrants: land. “Millions of acres. Iowa and Nebraska. Land for sale on 10 years credit by the Burlington & Missouri River R. R. Co. at 6 per ct interest and low prices…,” 1872. Library of Congress.

The Homestead Act excluded married women from filing claims because they were considered the legal dependents of their husbands. Some unmarried women filed claims on their own, but single farmers (male or female) were hard-pressed to run a farm and they were a small minority. Most farm households adopted traditional divisions of labor: men worked in the fields and women managed the home and kept the family fed. Both were essential.

Migrants sometimes found in homesteads a self-sufficiency denied at home. Second or third sons who did not inherit land in Scandinavia, for instance, founded farm communities in Minnesota, Dakota, and other Midwestern territories in the 1860s. Boosters encouraged emigration by advertising the semiarid Plains as, for instance, “a flowery meadow of great fertility clothed in nutritious grasses, and watered by numerous streams.” Western populations exploded. The Plains were transformed. In 1860, for example, Kansas had about 10,000 farms; in 1880 it had 239,000. Texas, for instance, saw enormous population growth. The federal government counted 200,000 persons in Texas in 1850, 1,600,00 in 1880, and 3,000,000 in 1900, becoming the sixth most populous state in the nation.