Historians often cite preservation and conservation as the two competing strategies that dueled for supremacy among environmental reformers during the Progressive Era. The tensions between these two approaches crystalized in the debate over a proposed dam in the Hetch Hetchy Valley in California. The fight revolved around the provision of water for San Francisco. Engineers identified the location where the Tuolomne River ran through Hetch Hetchy as an ideal site for a reservoir. The project had been suggested in the 1880s but picked up momentum in the early twentieth century. But the valley was located inside Yosemite National Park. (Yosemite was designated a national park in 1890, though the land had been set aside earlier in a grant approved by President Lincoln in 1864.) The debate over Hetch Hetchy revealed two distinct positions on the value of the valley and on the purpose of public lands.

John Muir, a naturalist, writer, and founder of the Sierra Club, invoked the “God of the Mountains” in his defense of the valley in its supposedly pristine condition. On the other side, Gifford Pinchot, arguably the father of American forestry and a key player in the federal management of national forests, focused on what he understood to be the purpose of conservation: “to take every part of the land and its resources and put it to that use in which it will serve the most people.”Muir took a wider view of what the people needed, writing that “everybody needs beauty as well as bread.” These dueling arguments revealed the key differences in environmental thought: Muir, on the side of the preservationists, advocated setting aside pristine lands for their aesthetic and spiritual value, for those who could take his advice to “[get] in touch with the nerves of Mother Earth.”Pinchot, on the other hand, led the charge for conservation, a kind of environmental utilitarianism. Conservation was about efficient use of available resources, about planning and control, and about “the prevention of waste.” In Hetch Hetchy, conservation won out. Congress approved the project in 1913. The dam was built and the valley flooded for the benefit of San Francisco residents. 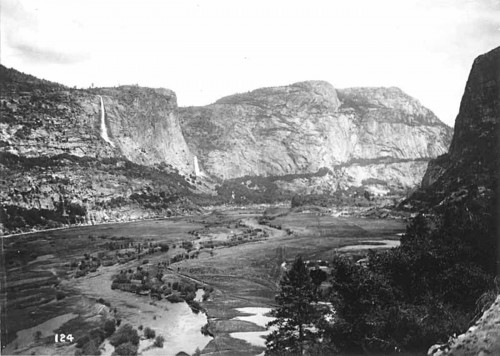 The image on the top shows the Hetch Hetchy Valley before it was dammed. The bottom photograph, taken almost a century later, shows the obvious difference after damming, with the submergence of the valley floor under the reservoir waters. Photograph of the Hetch Hetchy Valley before damming, from the Sierra Club Bulletin, January 1908. Wikimedia; Daniel Mayer (photographer), May 2002. Wikimedia.

While preservation was often articulated as an escape from an increasingly urbanized and industrialized way of life and as a welcome respite from the challenges of modernity (at least, for those who had the means to escape), the conservationists were more closely aligned with broader trends in American society. Although the “greatest good for the greatest number” was very nearly the catch phrase of conservation, conservationist policies most often benefited the nation’s financial interests. For example, many states instituted game laws to regulate hunting and protect wildlife, but laws could be entirely unbalanced. In Pennsylvania, local game laws included requiring firearm permits for non-citizens, barred hunting on Sundays, and banned the shooting of songbirds. These laws disproportionately affected Italian immigrants, critics said, as Italians often hunted songbirds for subsistence, worked in mines for low wages every day but Sunday, and were too poor to purchase permits or to pay the fines levied against them when game wardens caught them breaking these new laws. Other laws, for example, offered up resources to businesses at costs prohibitive to all but the wealthiest companies and individuals, or with regulatory requirements that could be met only by companies with extensive resources.

But it Progressive Era environmentalism was about more than the management of American public lands. After all, reformers addressing issues facing the urban poor were doing environmental work. Settlement house workers like Jane Addams and Florence Kelley focused on questions of health and sanitation, while activists concerned with working conditions, most notably Dr. Alice Hamilton, investigated both worksite hazards and occupational and bodily harm. The Progressives’ commitment to the provision of public services at the municipal level meant more coordination and oversight in matters of public health, waste management, even playgrounds and city parks. Their work focused on the intersection of communities and their material environments, highlighting the urgency of urban environmental concerns.

While reform movements focused their attention on the urban poor, other efforts targeted rural communities. The Country Life movement, spearheaded by Liberty Hyde Bailey, sought to support agrarian families and encourage young people to stay in their communities and run family farms. Early-twentieth-century educational reforms included a commitment to environmentalism at the elementary level. Led by Bailey and Anna Botsford Comstock, the nature study movement took students outside to experience natural processes and to help them develop observational skills and an appreciation for the natural world.

Other examples highlight the interconnectedness of urban and rural communities in the late nineteenth and early twentieth centuries. The extinction of the North American passenger pigeon reveals the complexity of Progressive Era relationships between people and nature. Passenger pigeons were actively hunted, prepared at New York’s finest restaurants and in the humblest of farm kitchens. Some hunted them for pay; others shot them in competitions at sporting clubs. And then they were gone, their ubiquity giving way only to nostalgia. Many Americans took notice at the great extinction of a species that had perhaps numbered in the billions and then was eradicated. Women in Audubon Society chapters organized against the fashion of wearing feathers—even whole birds—on ladies’ hats. Upper and middle-class women made up the lion’s share of the membership of these societies. They used their social standing to fight for birds. Pressure created national wildlife refuges and key laws and regulations that included the Lacey Act of 1900, banning the shipment of species killed illegally across state lines. Following the feathers backward, from the hats to the hunters to the birds themselves, and examining the ways women mobilized contemporary notions of womanhood in the service of protecting avian beauty, reveals a tangle of cultural and economic processes. Such examples also reveal the range of ideas, policies, and practices wrapped up in figuring out what—and who—American nature should be for.