So much of the energy and character of “the sixties” emerged from the civil rights movement, which won its greatest victories in the early years of the decade. The movement itself was changing. Many of the civil rights activists pushing for school desegregation in the 1950s were middle-class and middle-aged. In the 1960s, a new student movement arose whose members wanted swifter changes in the segregated South. Confrontational protests, marches, boycotts, and sit-ins accelerated.

The tone of the modern U.S. civil rights movement changed at a North Carolina department store in 1960, when four African American students participated in a “sit-in” at a whites-only lunch counter. The 1960 Greensboro sit-ins were typical. Activists sat at segregated lunch counters in an act of defiance, refusing to leave until being served and willing to be ridiculed, attacked, and arrested if they were not. It drew resistance but it forced the desegregation of Woolworth’s department store. It prompted copycat demonstrations across the South. The protests offered evidence that student-led direct action could enact social change and established the civil rights movement’s direction in the forthcoming years.

The following year, civil rights advocates attempted a bolder variation of a “sit-in” when they participated in the Freedom Rides. Activists organized interstate bus rides following a Supreme Court decision outlawing segregation on public buses and trains. The rides intended to test the court’s ruling, which many southern states had ignored. An interracial group of Freedom Riders boarded buses in Washington D.C. with the intention of sitting in integrated patterns on the buses as they traveled through the Deep South. On the initial rides in May 1961, the riders encountered fierce resistance in Alabama. Angry mobs composed of KKK members attacked riders in Birmingham, burning one of the buses and beating the activists who escaped. Despite the fact that the first riders abandoned their trip and decided to fly to their destination, New Orleans, civil rights activists remained vigilant. Additional Freedom Rides launched through the summer and generated national attention amid additional violent resistance. Ultimately, the Interstate Commerce Commission enforced integrated interstate buses and trains in November 1961.

In the fall of 1961, civil rights activists descended on Albany, a small city in southwest Georgia. A place known for entrenched segregation and racial violence, Albany seemed an unlikely place for black Americans to rally and demand civil rights gains. The activists there, however, formed the Albany Movement, a coalition of civil rights organizers that included members of the Student Nonviolent Coordinating Committee (SNCC, or, “snick”), the Southern Christian Leadership Conference (SCLC), and the NAACP. But in Albany the movement was stymied by police chief Laurie Pritchett, who launched mass arrests but refused to engage in police brutality and bailed out leading officials to avoid negative media attention. It was a peculiar scene, and a lesson for southern acvtivists.

Despite its defeat, Albany captured much of the energy of the civil rights movement. The Albany Movement included elements of the Christian commitment to social justice in its platform, with activists stating that all people were “of equal worth” in God’s family and that “no man may discriminate against or exploit another.” In many instances in the 1960s, black Christianity propelled civil rights advocates to action and demonstrated the significance of religion to the broader civil rights movement. King’s rise to prominence underscored the role that African American religious figures played in the 1960s civil rights movement. Protestors sang hymns and spirituals as they marched. Preachers rallied the people with messages of justice and hope. Churches hosted meetings, prayer vigils, and conferences on nonviolent resistance. The moral thrust of the movement strengthened African American activists while also confronting white society by framing segregation as a moral evil.

As the civil rights movement garnered more followers and more attention, white resistance stiffened. In October 1962, James Meredith became the first African American student to enroll at the University of Mississippi. Meredith’s enrollment sparked riots on the Oxford campus, prompting President John F. Kennedy to send in U.S. Marshals and National Guardsmen to maintain order.  On an evening known infamously as the Battle of Ole Miss, segregationists clashed with troops in the middle of campus, resulting in two deaths and hundreds of injuries. Violence despite federal intervention served as a reminder of the strength of white resistance to the civil rights movement, particularly in the realm of education. 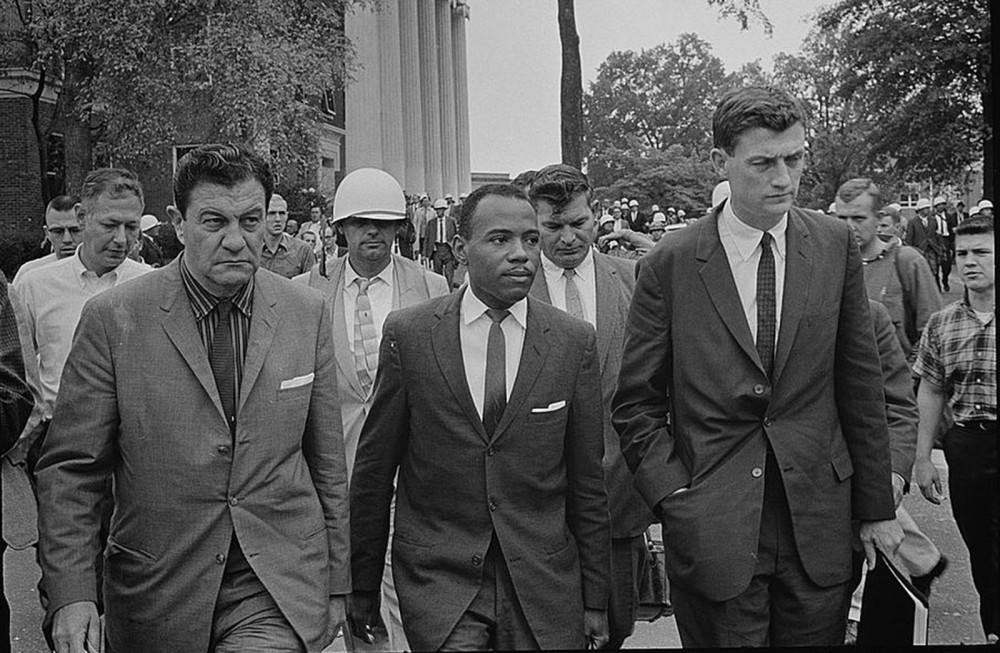 James Meredith, accompanied by U.S. Marshalls, walks to class at the University of Mississippi in 1962. Meredith was the first African-American student admitted to the still segregated Ole Miss. Marion S. Trikosko, “Integration at Ole Miss[issippi] Univ[ersity],” 1962. Library of Congress.

The following year, 1963, was perhaps the decade’s most eventful year for civil rights. In April and May, the SCLC organized the Birmingham Campaign, a broad campaign of direct action aiming to topple segregation in Alabama’s largest city. Activists used business boycotts, sit-ins, and peaceful marches as part of the campaign. SCLC leader Martin Luther King Jr. was jailed, prompting his famous handwritten letter urging not only his nonviolent approach but active confrontation to directly challenge injustice. The campaign further added to King’s national reputation and featured powerful photographs and video footage of white police officers using fire hoses and attack dogs on young African American protesters. It also yielded an agreement to desegregate public accommodations in the city: activists in Birmingham scored a victory for civil rights and drew international praise for the nonviolent approach in the face of police-sanctioned violence and bombings. 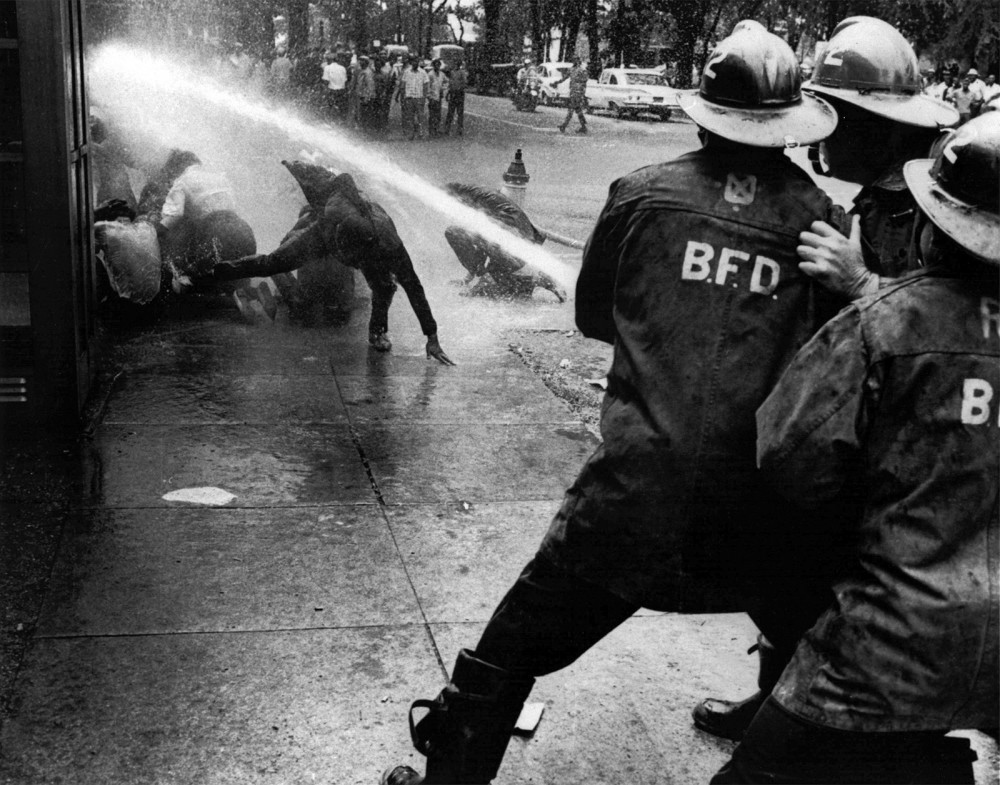 Images of police brutality against peaceful Civil Rights demonstrators shocked many Americans and helped increase support for the movement. Photograph.

White resistance magnified. In June, Alabama Governor George Wallace famously stood in the door of a classroom building in a symbolic attempt to halt integration at the University of Alabama. President Kennedy addressed the nation that evening, criticizing Wallace and calling for a comprehensive civil rights bill. A day later, civil rights leader Medgar Evers was assassinated at his home in Jackson, Mississippi. Civil rights leaders gathered in August 1963 for the March on Washington. The march called for, among other things, civil rights legislation, school integration, an end to discrimination by public and private employers, job training for the unemployed, and a raise in the minimum wage. On the steps of the Lincoln Memorial, King delivered his famous “I Have a Dream” speech, an internationally renowned call for civil rights and against racism that raised the movement’s profile to unprecedented heights. The year would end on a somber note with the assassination of President Kennedy, a public figure considered an important ally of civil rights, but it did not halt the civil rights movement. 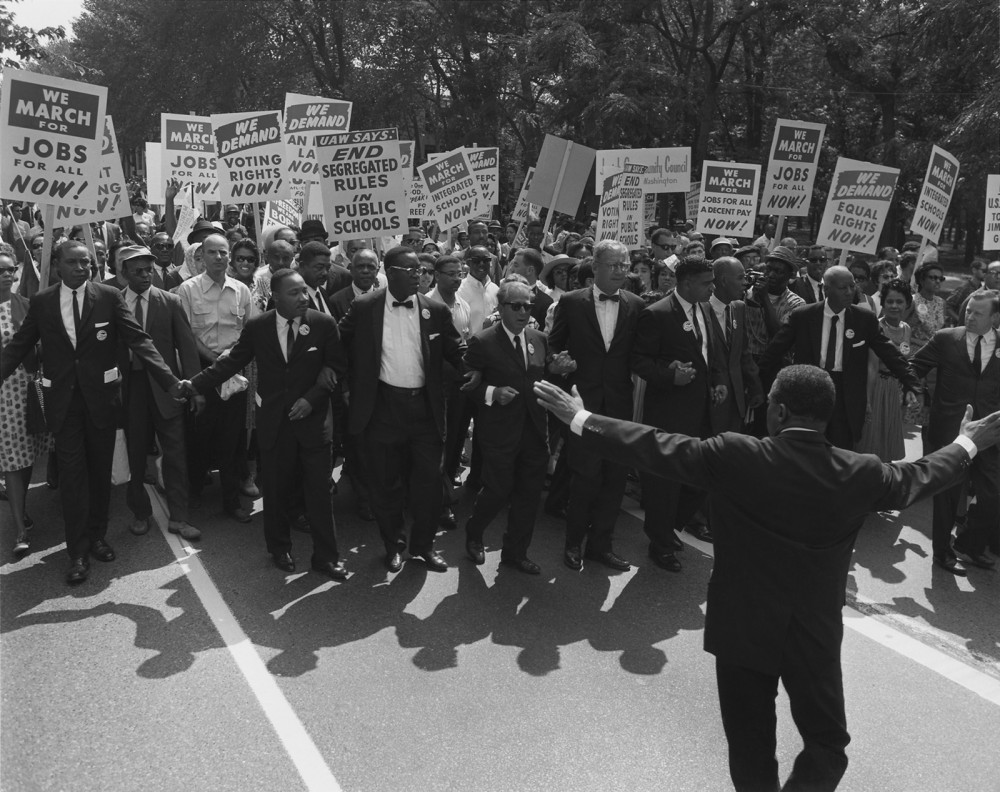 President Lyndon Johnson embraced the civil rights movement. The following summer he signed the Civil Rights Act of 1964, widely considered to be among the most important pieces of civil rights legislation in American history. The comprehensive act barred segregation in public accommodations and outlawed discrimination based on race, ethnicity, gender, and national or religious origin. 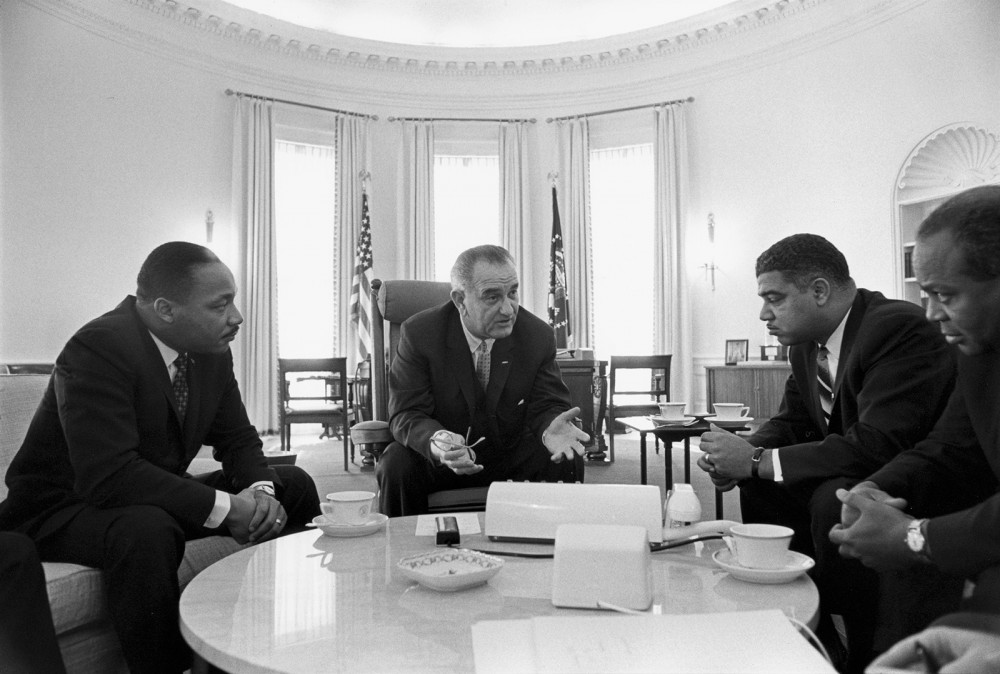 Lyndon B. Johnson sits with Civil Rights Leaders in the White House. One of Johnson’s greatest legacies would be his staunch support of civil rights legislation. Photograph, January 18, 1964. Wikimedia. 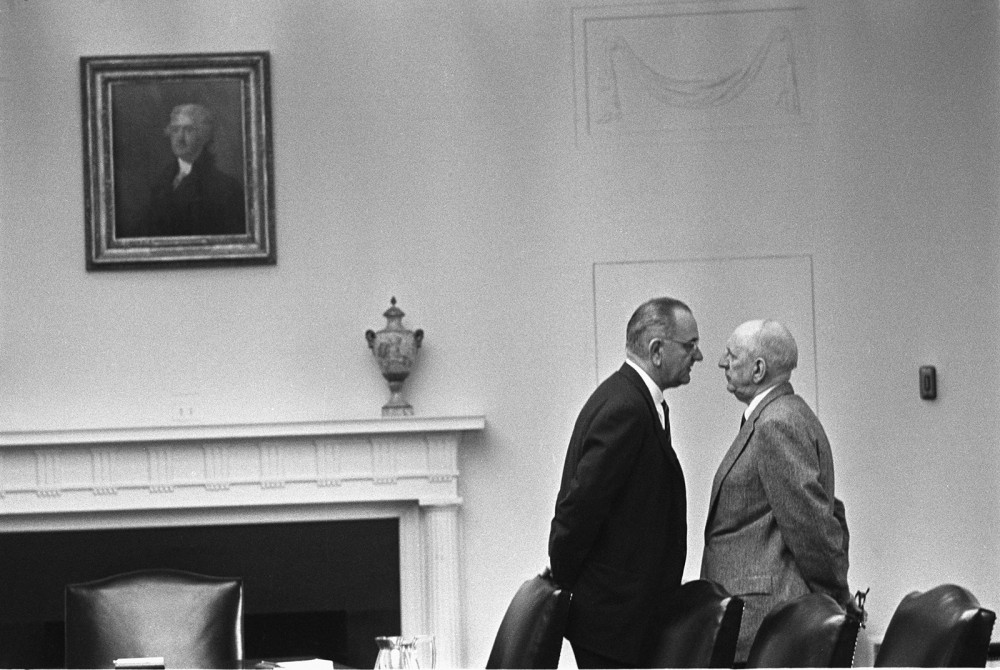 Direct action continued through the summer, as student-run organizations like SNCC and CORE (The Congress of Racial Equality) helped with the Freedom Summer in Mississippi, a drive to register African American voters in a state with an ugly history of discrimination. Freedom Summer campaigners set up schools for African American children and endured intimidation tactics. Even with progress, violent resistance against civil rights continued, particularly in regions with longstanding traditions of segregation.

Direct action and resistance to such action continued in March 1965, when activists attempted to march from Selma to Montgomery, Alabama, with the support of prominent civil rights leaders on behalf of local African American voting rights. In a narrative that had become familiar, “Bloody Sunday” featured peaceful protesters attacked by white law enforcement with batons and tear gas. After they were turned away violently a second time, marchers finally made the 70-mile trek to the state capitol later in the month. Coverage of the first march prompted President Johnson to present the bill that became the Voting Rights Act of 1965, an act that abolished voting discrimination in federal, state, and local elections with an eye on African American enfranchisement in the South.  In two consecutive years, landmark pieces of legislation had helped to weaken de jure segregation and disenfranchisement in America. 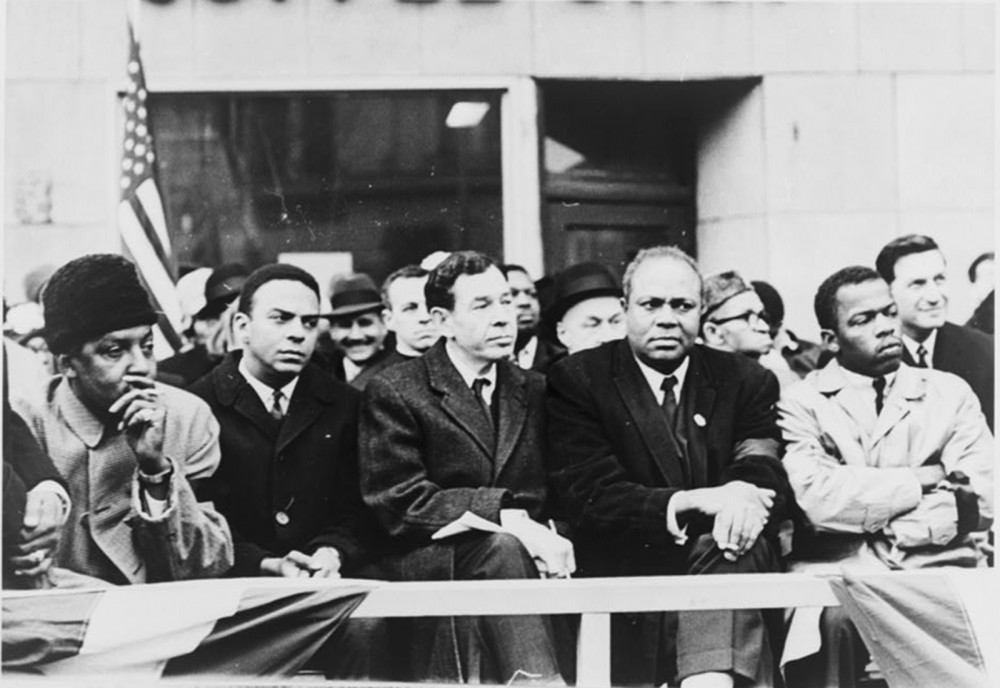 And then things began to stall. Days after the ratification of the Voting Rights Act, race riots broke out in the Watts District of Los Angeles. Rioting in Watts stemmed from local African American frustrations with residential segregation, police brutality, and racial profiling. Waves of riots would rock American cities every summer thereafter. Particularly destructive riots occurred in 1967—two summers later—in Newark and Detroit. Each resulted in deaths, injuries, arrests, and millions of dollars in property damage. In spite of black achievements, inner-city problems persisted for many African Americans. The phenomenon of “white flight”—when whites in metropolitan areas fled city centers for the suburbs—often resulted in “re-segregated” residential patterns. Limited access to economic and social opportunities in urban areas bred discord. In addition to reminding the nation that the civil rights movement was a complex, ongoing event without a concrete endpoint, the unrest in northern cities reinforced the notion that the struggle did not occur solely in the South. Many Americans also viewed the riots as an indictment of the Great Society, President Johnson’s sweeping agenda of domestic programs that sought to remedy inner-city ills by offering better access to education, jobs, medical care, housing, and other forms of social welfare. The civil rights movement was never the same.