The Great Recession began, as most American economic catastrophes began, with the bursting of a speculative bubble.  Throughout the 1990s and into the new millennium, home prices continued to climb, and financial services firms looked to cash in on what seemed to be a safe but lucrative investment.  Especially after the dot-com bubble burst, investors searched for a secure investment that was rooted in clear value and not trendy technological speculation.  And what could be more secure than real estate?  But mortgage companies began writing increasingly risky loans and then bundling them together and selling them over and over again, sometimes so quickly that it became difficult to determine exactly who owned what.  Decades of lax regulation had again enabled risky business practices to dominate the world of American finance.  When American homeowners began to default on their loans, the whole system tumbled quickly.  Seemingly solid financial services firms disappeared almost overnight. In order to prevent the crisis from spreading, the federal government poured billions of dollars into the industry, propping up hobbled banks. Massive giveaways to bankers created shock waves of resentment throughout the rest of the country.  On the Right, conservative members of the Tea Party decried the cronyism of an Obama administration filled with former Wall Street executives. The same energies also motivated the Occupy Wall Street movement, as mostly young left-leaning New Yorkers protesting an American economy that seemed overwhelmingly tilted toward “the one percent.”

The Great Recession only magnified already rising income and wealth inequalities. According to the Chief Investment Officer at JPMorgan Chase, the largest bank in the United States, “profit margins have reached levels not seen in decades,” and “reductions in wages and benefits explain the majority of the net improvement.” A study from the Congressional Budget authority found that since the late 1970s, after-tax benefits of the wealthiest 1% grew by over 300%. The “average” American’s benefits had grown 35%. Economic trends have disproportionately and objectively benefited the wealthiest Americans. Still, despite some political rhetoric, American frustration has not generated anything like the social unrest of the early twentieth century. A weakened labor movement and a strong conservative base continue to stymie serious attempts at redistributing wealth. Occupy Wall Street managed to generate a fair number of headlines and shift public discussion away from budget cuts and toward inequality, but its membership amounted to only a fraction of the far more influential and money-driven Tea Party. Its presence on the public stage was fleeting.
The Great Recession, however, was not. While American banks quickly recovered and recaptured their steady profits, and the American stock market climbed again to new heights, American workers continued to lag. Job growth would remain minuscule and unemployment rates would remain stubbornly high. Wages froze, meanwhile, and well-paying full-time jobs that were lost were too often replaced by low-paying, part-time work. A generation of workers coming of age within the crisis, moreover, had been savaged by the economic collapse. Unemployment among young Americans hovered for years at rates nearly double the national average. 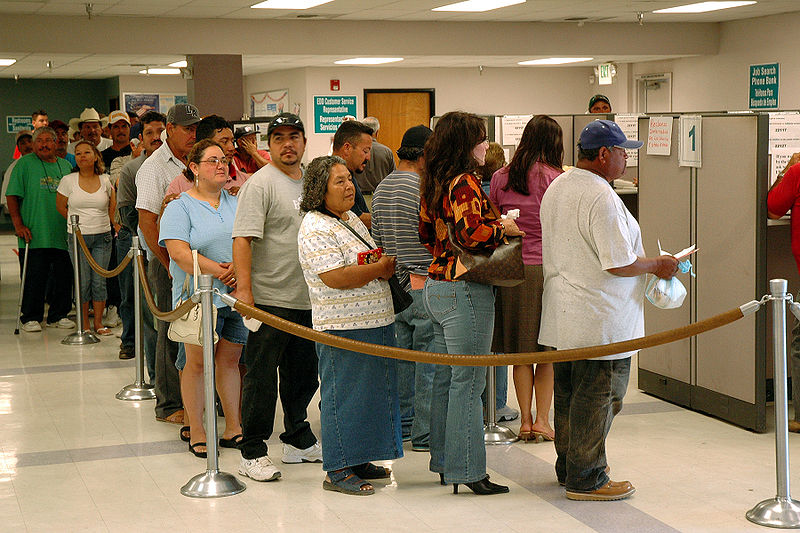 Hundreds of people who lost jobs when a freeze destroyed crops in California between Jan.12-14, 2007, lined up at state Unemployment Development Department offices, including the office in the border city of Calexico, California, to register for the Disaster Unemployment Assistance program funded by FEMA.