Just as cultural limits loosened across the nation, the 1920s represented a period of serious self-reflection among African Americans, most especially those in northern ghettos. New York City was a popular destination of American blacks during the Great Migration. The city’s black population grew 257%, from 91,709 in 1910 to 327,706 by 1930 (the white population grew only 20%). Moreover, by 1930, some 98,620 foreign-born blacks had migrated to the U.S. Nearly half made their home in Manhattan’s Harlem district.

Harlem originally lay between Fifth Avenue to Eighth Avenue and 130th Street to 145th Street. By 1930, the district had expanded to 155th Street and was home to 164,000 mostly African Americans. Continuous relocation to “the greatest Negro City in the world” exacerbated problems with crime, health, housing, and unemployment. Nevertheless, it importantly brought together a mass of black people energized by the population’s World War I military service, the urban environment, and for many, ideas of Pan-Africanism or Garveyism. Out of the area’s cultural ferment emerged the Harlem Renaissance, or what was then termed “New Negro Movement.” While this stirring in self-consciousness and racial pride was not confined to Harlem, this district was truly as James Weldon Johnson described: “The Culture Capital.” The Harlem Renaissance became a key component in African Americans’ long history of cultural and intellectual achievements.

Alain Locke did not coin “New Negro”, but he did much to popularize it. In the 1925 The New Negro, Locke proclaimed that the generation of subservience was no more—“we are achieving something like a spiritual emancipation.” Bringing together writings by men and women, young and old, black and white, Locke produced an anthology that was of African Americans rather than simply about them. The book joined many others. Popular Harlem Renaissance writers published some twenty-six novels, ten volumes of poetry, and countless short stories between 1922 and 1935. Alongside the well-known Langston Hughes and Claude McKay, women writers like Jessie Redmon Fauset and Zora Neale Hurston published nearly one-third of these novels. While themes varied, the literature frequently explored and countered pervading stereotypes and forms of American racial prejudice.

The Harlem Renaissance was manifested in theatre, art, and music. For the first time, Broadway presented black actors in serious roles. The 1924 production, Dixie to Broadway, was the first all-black show with mainstream showings. In art, Meta Vaux Warrick Fuller, Aaron Douglas, and Palmer Hayden showcased black cultural heritage as well as captured the population’s current experience. In music, jazz rocketed in popularity. Eager to hear “real jazz,” whites journeyed to Harlem’s Cotton Club and Smalls. Next to Greenwich Village, Harlem’s nightclubs and speakeasies (venues where alcohol was publicly consumed) presented a place where sexual freedom and gay life thrived. Unfortunately, while headliners like Duke Ellington were hired to entertain at Harlem’s venues, the surrounding black community was usually excluded. Furthermore, black performers were often restricted from restroom use and relegated to service door entry. As the Renaissance faded to a close, several Harlem Renaissance artists went on to produce important works indicating that this movement was but one component in African American’s long history of cultural and intellectual achievements. 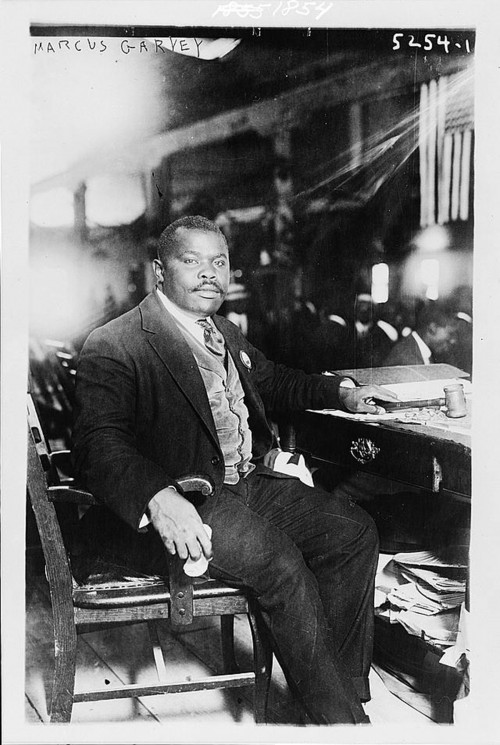 Marcus Garvey inspired black American activists disappointed with the lack of progress since emancipation to create a world-wide community to fight injustice. One of the many forms of social activism in the 1920s, Garveyism was seen by some as too radical to engender any real change. Yet Garveyism formed a substantial following, and was a major stimulus for later black nationalistic movements like the Black Panthers. Photograph of Marcus Garvey, August 5, 1924. Library of Congress.

The explosion of African American self-expression found multiple outlets in politics. In the 1910s and 20s, perhaps no one so attracted disaffected black activists as Marcus Garvey. Garvey was a Jamaican publisher and labor organizer who arrived in New York City in 1916. Within just a few years of his arrival, he built the largest black nationalist organization in the world, the Universal Negro Improvement Association (UNIA). Inspired by Pan-Africanism and Booker T. Washington’s model of industrial education, and critical of what he saw as DuBois’s elitist strategies in service of black elites, Garvey sought to promote racial pride, encourage black economic independence, and root out racial oppression in Africa and the Diaspora.

Headquartered in Harlem, the UNIA published a newspaper, Negro World, and organized elaborate parades in which members, “Garveyites,” dressed in ornate, militaristic regalia and marched down city streets. The organization criticized the slow pace of the judicial focus of the National Association for the Advancement of Colored People (NAACP), as well as this organization’s acceptance of memberships and funds from whites. “For the Negro to depend on the ballot and his industrial progress alone,” Garvey opined, “will be hopeless as it does not help him when he is lynched, burned, jim-crowed, and segregated.” In 1919, the UNIA announced plans to develop a shipping company called the Black Star Line as part of a plan that pushed for blacks to reject the political system and to “return to Africa” instead.” Most of the investments came in the form of shares purchased by UNIA members, many of whom heard Garvey give rousing speeches across the country about the importance of establishing commercial ventures between African Americans, Afro-Caribbeans, and Africans.

Garvey’s detractors disparaged these public displays and poorly managed business ventures, and they criticized Garvey for peddling empty gestures in place of measures that addressed the material concerns of African Americans. NAACP leaders depicted Garvey’s plan as one that simply said, “Give up! Surrender! The struggle is useless.” Enflamed by his aggressive attacks on other black activists and his radical ideas of racial independence, many African American and Afro-Caribbean leaders worked with government officials and launched the “Garvey Must Go” campaign, which culminated in his 1922 indictment and 1925 imprisonment and subsequent deportation for “using the mails for fraudulent purposes.” The UNIA never recovered its popularity or financial support, even after Garvey’s pardon in 1927, but his movement made a lasting impact on black consciousness in the United States and abroad. He inspired the likes of Malcolm X, whose parents were Garveyites, and Kwame Nkrumah, the first president of Ghana. Garvey’s message, perhaps best captured by his rallying cry, “Up, you mighty race,” resonated with African Americans who found in Garveyism a dignity not granted them in their everyday lives. In that sense, it was all too typical of the Harlem Renaissance.