The United States and the European War

While Hitler marched across Europe, the Japanese continued their war in the Pacific. In 1939 the United States dissolved its trade treaties with Japan. In 1940 the American Neutrality Acts cut off supplies of necessary war materials by embargoing oil, steel, rubber, and other vital goods. It was hoped that economic pressure would shut down the Japanese war machine. Instead, Japan’s resource-starved military launched invasions across the Pacific to sustain its war effort. The Japanese called their new empire the Greater East Asia Co-Prosperity Sphere and, with the cry of “Asia for the Asians,” made war against European powers and independent nations throughout the region. Diplomatic relations between Japan and the United States collapsed. The United States demanded Japan withdraw from China; Japan considered the oil embargo a de facto declaration of war.

Japanese military planners, believing that American intervention was inevitable, planned a coordinated Pacific offensive to neutralize the United States and other European powers and provide time for Japan to complete its conquests and fortify its positions. On the morning of December 7, 1941, the Japanese launched a surprise attack on the American naval base at Pearl Harbor, Hawaii. Japanese military planners hoped to destroy enough battleships and aircraft carriers to cripple American naval power for years. 2,400 Americans were killed in the attack.

American isolationism fell at Pearl Harbor. Japan had assaulted Hong Kong, the Philippines, and American holdings throughout the Pacific, but it was the attack on Hawaii that threw the United States into a global conflict. Franklin Roosevelt called December 7 “a date which will live in infamy” and called for a declaration of war, which Congress answered within hours. Within a week of Pearl Harbor the United States had declared war on the entire Axis, turning two previously separate conflicts into a true world war.

The American war began slowly. Britain had stood alone militarily in Europe, but American supplies had bolstered their resistance. Hitler unleashed his U-boat “wolf packs” into the Atlantic Oceans with orders to sink anything carrying aid to Britain, but Britain and the United States’ superior tactics and technology won them the Battle of the Atlantic. British code breakers cracked Germany’s radio codes and the surge of intelligence, dubbed Ultra, coupled with massive naval convoys escorted by destroyers armed with sonar and depth charges, gave the advantage to the Allies and by 1942, Hitler’s Kriegsmarine was losing ships faster than they could be built.

In North Africa in 1942, British victory at El Alamein began pushing the Germans back. In November, the first American combat troops entered the European war, landing in French Morocco and pushing the Germans east while the British pushed west. By 1943, the Allies had pushed Axis forces out of Africa. In January President Roosevelt and Prime Minister Churchill met at Casablanca to discuss the next step of the European war. Churchill convinced Roosevelt to chase the Axis up Italy, into the “soft underbelly” of Europe. Afterward, Roosevelt announcing to the press that the Allies would accept nothing less than unconditional surrender.

Meanwhile, the Army Air Force (AAF) sent hundreds (and eventually thousands) of bombers to England in preparation for a massive Strategic Bombing Campaign against Germany. The plan was to bomb Germany around the clock. American bombers hit German ball-bearing factories, rail yards, oil fields and manufacturing centers during the day, while the British Royal Air Force (RAF) carpet-bombed German cities at night. Flying in formation, they initially flew unescorted, since many believed that bombers equipped with defensive firepower flew too high and too fast to be attacked. However, advanced German technology allowed fighters to easily shoot down the lumbering bombers. On some disastrous missions, the Germans shot down almost 50% of American aircraft. However, the advent and implementation of a long-range escort fighter let the bombers hit their targets more accurately while fighters confronted opposing German aircraft. 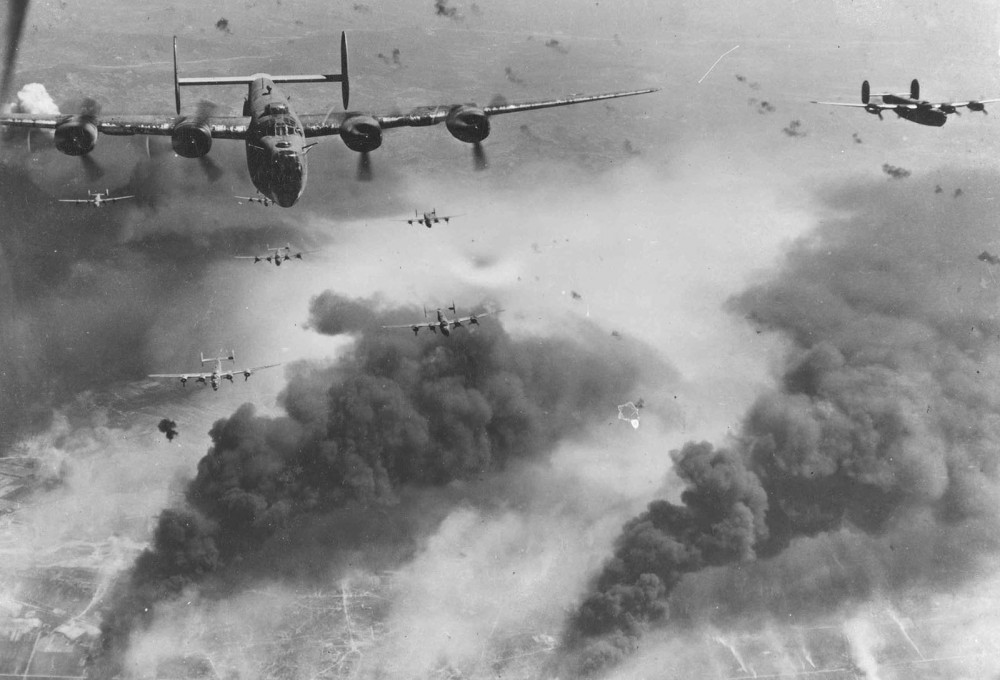 In 1944, Allied forces began a bombing campaign of railroad and oil targets in Bucharest, part of the wider policy of bombing expeditions meant to incapacitate German transportation. Bucharest was considered the number one oil target in Europe. Photograph, August 1, 1943. Wikimedia. 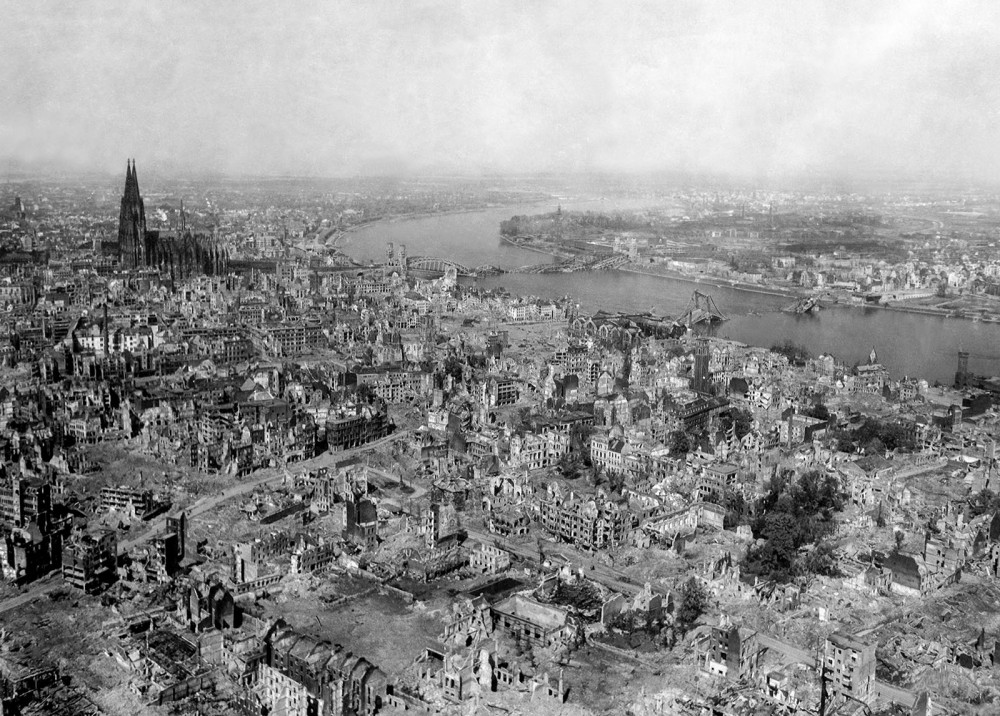 Bombings throughout Europe caused complete devastation in some areas, leveling beautiful ancient cities like Cologne, Germany. Cologne experienced an astonishing 262 separate air raids by Allied forces, leaving the city in ruins as in these the photograph above. Amazingly, the Cologne Cathedral stands nearly undamaged even after being hit numerous times, while the area around it crumbles. Photograph, April 24, 1945. Wikimedia.

In the wake of the Soviet’s victory at Stalingrad, the “Big Three” (Roosevelt, Churchill, and Stalin) met in Tehran in November 1943. Dismissing Africa and Italy as a side-show, Stalin demanded that Britain and the United States invade France to relive pressure on the Eastern Front. Churchill was hesitant, but Roosevelt was eager. The invasion was tentatively scheduled for 1944.

Back in Italy, the “soft underbelly” turned out to be much tougher than Churchill had imagined. Italy’s narrow, mountainous terrain gave the defending Axis the advantage. Movement up the peninsula was slow and in some places conditions returned to the trench-like warfare of WWI. Americans attempted to land troops behind them at Anzio on the western coast of Italy but they became surrounded and suffered heavy casualties. But the Allies pushed up the peninsula, Mussolini’s government revolted, and a new Italian government quickly made peace.

On the day the American army entered Rome, American, British and Canadian forces launched Operation Overlord, the long-awaited invasion of France. D-Day, as it became popularly known, was the largest amphibious assault in history. American general Dwight Eisenhower was uncertain enough of the attack’s chances that the night before the invasion he wrote two speeches: one for success and one for failure. The Allied landings were successful, and although progress across France was much slower than hoped for, Paris was liberated roughly two months later. Allied bombing expeditions meanwhile continued to level German cities and industrial capacity. Perhaps 400,000 German civilians were killed by allied bombing.

The Nazis were crumbling on both fronts. Hitler tried but failed to turn the war in his favor in the west. The Battle of the Bulge failed to drive the Allies back into the British Channel, but the delay cost the Allies the winter. The invasion of Germany would have to wait, while the Soviet Union continued its relentless push westward, ravaging German populations in retribution for German war crimes.

German counterattacks in the east failed to dislodge the Soviet advance, destroying any last chance Germany might have had to regain the initiative. 1945 dawned with the end of European war in sight. The Big Three met again at Yalta in the Soviet Union, where they reaffirmed the demand for Hitler’s unconditional surrender and began to plan for postwar Europe.

The Soviet Union reached Germany in January, and the Americans crossed the Rhine in March. In late April American and Soviet troops met at the Elbe while the Soviets, pushed relentlessly by Stalin to reach Berlin first, took the capital city in May, days after Hitler and his high command had committed suicide in a city bunker. Germany was conquered. The European war was over. Allied leaders met again, this time at Potsdam, Germany, where it was decided that Germany would be divided into pieces according to current Allied occupation, with Berlin likewise divided, pending future elections. Stalin also agreed to join the fight against Japan in approximately three months.