Economies win wars no less than militaries. The war converted American factories to wartime production, reawakened Americans’ economic might, armed Allied belligerents and the American armed forces, effectively pulled America out of the Great Depression, and ushered in an era of unparalleled economic prosperity.

Roosevelt’s New Deal had ameliorated the worst of the Depression, but the economy still limped its way forward into the 1930s. But then Europe fell into war, and, despite its isolationism, Americans were glad to sell the Allies arms and supplies. And then Pearl Harbor changed everything. The United States drafted the economy into war service. The “sleeping giant” mobilized its unrivalled economic capacity to wage worldwide war. Governmental entities such as the War Production Board and the Office of War Mobilization and Reconversion managed economic production for the war effort and economic output exploded. An economy that was unable to provide work for a quarter of the work force less than a decade earlier now struggled to fill vacant positions.

Government spending during the four years of war doubled all federal spending in all of American history up to that point. The budget deficit soared, but, just as Depression Era economists had counseled, the government’s massive intervention annihilated unemployment and propelled growth. The economy that came out of the war looked nothing like the one that had begun it.

Military production came at the expense of the civilian consumer economy. Appliance and automobile manufacturers converted their plants to produce weapons and vehicles. Consumer choice was foreclosed. Every American received rationing cards and, legally, goods such as gasoline, coffee, meat, cheese, butter, processed food, firewood, and sugar could not be purchased without them. The housing industry was shut down, and the cities became overcrowded.

But the wartime economy boomed. The Roosevelt administration urged citizens to save their earnings or buy war bonds to prevent inflation. Bond drives were held nationally and headlined by Hollywood celebrities. Such drives were hugely successful. They not only funded much of the war effort, they helped to tame inflation as well. So too did tax rates. The federal government raised income taxes and boosted the top marginal tax rate to 94%. 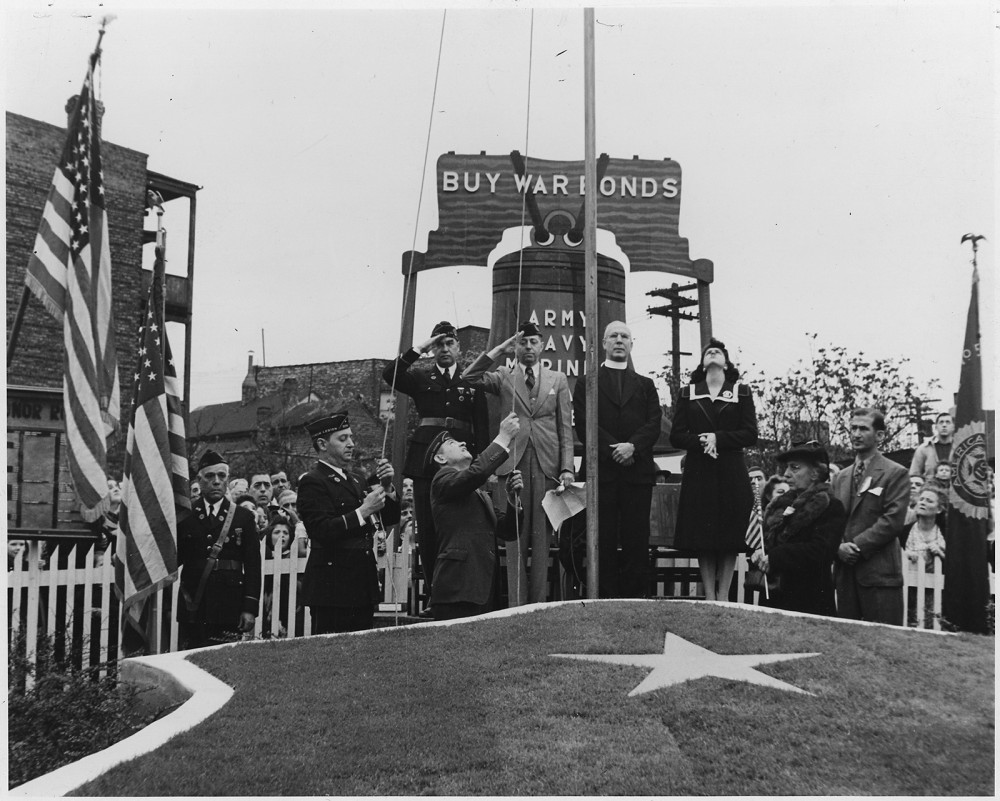 Much like during WWI, citizens during WWI were urged to buy war bonds to support the effort overseas. Rallies like this one appealed to Americans’ sense of patriotism. Wikimedia.

With the economy booming and twenty million American workers placed into military service, unemployment virtually disappeared. And yet limits remained. Many defense contractors still refused to hire black workers. A. Philip Randolph in 1941 threatened to lead a march on Washington in protest, compelling Roosevelt to issue Executive Order Number 8802, the Fair Employment Practice in Defense Industries Act, which established the Fair Employment Practices Committee to end racial discrimination in the federal government and the defense industry.

During the war, more and more African Americans continued to leave the agrarian south for the industrial north. And as more and more men joined the military, and more and more positions went unfilled, women joined the workforce en masse. Other American producers looked outside of the United States, southward, to Mexico, to fill its labor force. Between 1942 and 1964, the United States contracted thousands of Mexican nationals to work in American agriculture and railroads in the Bracero Program. Jointly administered by the State Department, the Department of Labor, and the Department of Justice, the binational agreement secured five million contracts across twenty four states.

With factory work proliferating across the country and agricultural labor experiencing severe labor shortages, the presidents of Mexico and the U.S. signed an agreement in July 1942 to bring the first wave of legally contracted workers to California. Discriminatory policies towards people of Mexican descent prevented bracero contracts in Texas until 1947. The Bracero Program survived the war, enshrined in law until the 1960s, when the United States liberalized its immigration laws. Though braceros suffered exploitative labor conditions, for the men who participated the program was a mixed blessing. Interviews with ex-braceros captured the complexity. “They would call us pigs, I know we were a lot, but they didn’t have to treat us that way,” one said of his employers, while another said, “For me it was a blessing, the United States was a blessing…, it is a nation I fell in love with because of the excess work and good pay.” After the exodus of Mexican migrants during the Depression, the program helped to reestablish Mexican migration, institutionalized migrant farm work across much of the country, and further planted a Mexican presence in the southern and western United States.