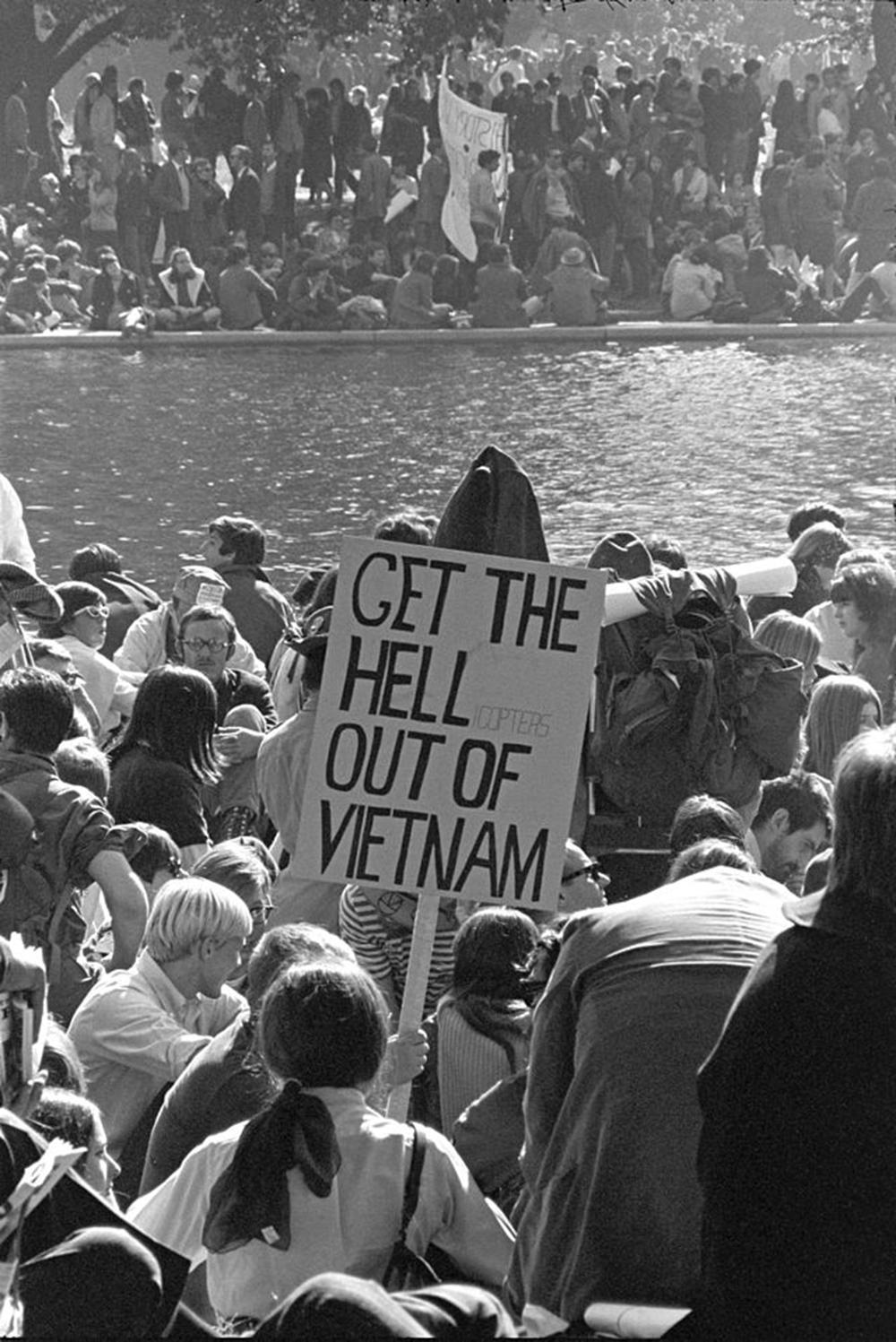 Frank Wolfe, Vietnam War protestors at the March on the Pentagon, Lyndon B. Johnson Library via Wikimedia.

Perhaps no single issue contributed more to public disillusionment than the Vietnam War. The “domino theory”—the idea that if a country fell to communism, then neighboring states would soon follow—governed American foreign policy. After the communist takeover of China in 1949, the United States financially supported the French military’s effort to retain control over its colonies in Vietnam, Cambodia and Laos. But the French were defeated in 1954 and Vietnam was divided into the communist North and anti-communist South.

The American public remained largely unaware of Vietnam in the early 1960s, even as President John F. Kennedy deployed over sixteen thousand military advisers to help South Vietnam suppress a domestic communist insurgency. This all changed in 1964, when Congress passed the Gulf of Tonkin Resolution after a minor episode involving American and North Vietnamese naval forces. The Johnson administration distorted the incident to provide a pretext for escalating American involvement in Vietnam. The resolution authorized the president to send bombs and troops into Vietnam. Only two senators opposed the resolution.

The first combat troops arrived in South Vietnam in 1965 and as the war deteriorated the Johnson administration escalated the war. Soon hundreds of thousands of troops were deployed. Stalemate, body counts, hazy war aims, and the draft all catalyzed the anti-war movement and triggered protests throughout the United States and Europe. With no end in sight, protesters burned their draft cards, refused to pay income tax, occupied government buildings, and delayed trains loaded with war materials. By 1967, anti-war demonstrations drew crowds in the hundreds of thousands. In one protest, hundreds were arrested after surrounding the Pentagon.

Vietnam was the first “living room war.” Television, print media, and liberal access to the battlefield provided unprecedented coverage of the war’s brutality. Americans confronted grisly images of casualties and atrocities. In 1965, CBS Evening News aired a segment in which United States Marines burned the South Vietnamese village of Cam Ne with little apparent regard for the lives of its occupants, who had been accused of aiding Viet Cong guerrillas. President Johnson berated the head of CBS, yelling “Your boys just shat on the American flag.”

While the U. S. government imposed no formal censorship on the press during Vietnam, the White House and military nevertheless used press briefings and interviews to paint a positive image of the war effort. The United States was winning the war, officials claimed. They cited numbers of enemies killed, villages secured, and South Vietnamese troops trained. American journalists in Vietnam, however, quickly realized the hollowness of such claims (the press referred to afternoon press briefing in Saigon as “the Five O’Clock Follies”). Editors frequently toned down their reporters’ pessimism, often citing conflicting information received from their own sources, who were typically government officials. But the evidence of a stalemate mounted. American troop levels climbed yet victory remained elusive. Stories like CBS’s Cam Ne piece exposed the “credibility gap,” the yawning chasm between the claims of official sources and the reality on the ground in Vietnam.Nothing did more to expose this gap than the 1968 Tet Offensive. In January, communist forces engaged in a coordinated attack on more than one hundred American and South Vietnamese sites throughout South Vietnam, including the American embassy in Saigon. While U.S. forces repulsed the attack and inflicted heavy casualties on the Viet Cong, Tet demonstrated that, despite repeated claims by administration officials, after years of war the enemy could still strike at will anywhere in the country. Subsequent stories and images eroded public trust even further. In 1969, investigative reporter Seymour Hersh revealed that U.S. troops had massacred hundreds of civilians in the village of My Lai. Three years later, Americans cringed at Nick Ut’s wrenching photograph of a naked Vietnamese child fleeing an American napalm attack. More and more American voices came out against the war.

Reeling from the war’s growing unpopularity, on March 31, 1968, President Johnson announced on national television that he would not seek reelection. Eugene McCarthy and Robert F. Kennedy unsuccessfully battled against Johnson’s vice president, Hubert Humphrey, for the Democratic Party nomination (Kennedy was assassinated in June). At the Democratic Party’s national convention in Chicago, local police brutally assaulted protestors on national television. In a closely fought contest, Republican challenger Richard Nixon, running on a platform of “law and order” and a vague plan to end the War. Well aware of domestic pressure to wind down the war, Nixon sought, on the one hand, to appease anti-war sentiment by promising to phase out the draft, train South Vietnamese troops, and gradually withdraw American troops. He called it “Vietnamization.” At the same time, however, Nixon appealed to the so-called “silent majority” of Americans who still supported the war and opposed the anti-war movement by calling for an “honorable” end to the war (he later called it “peace with honor”). He narrowly edged Humphrey in the fall’s election. 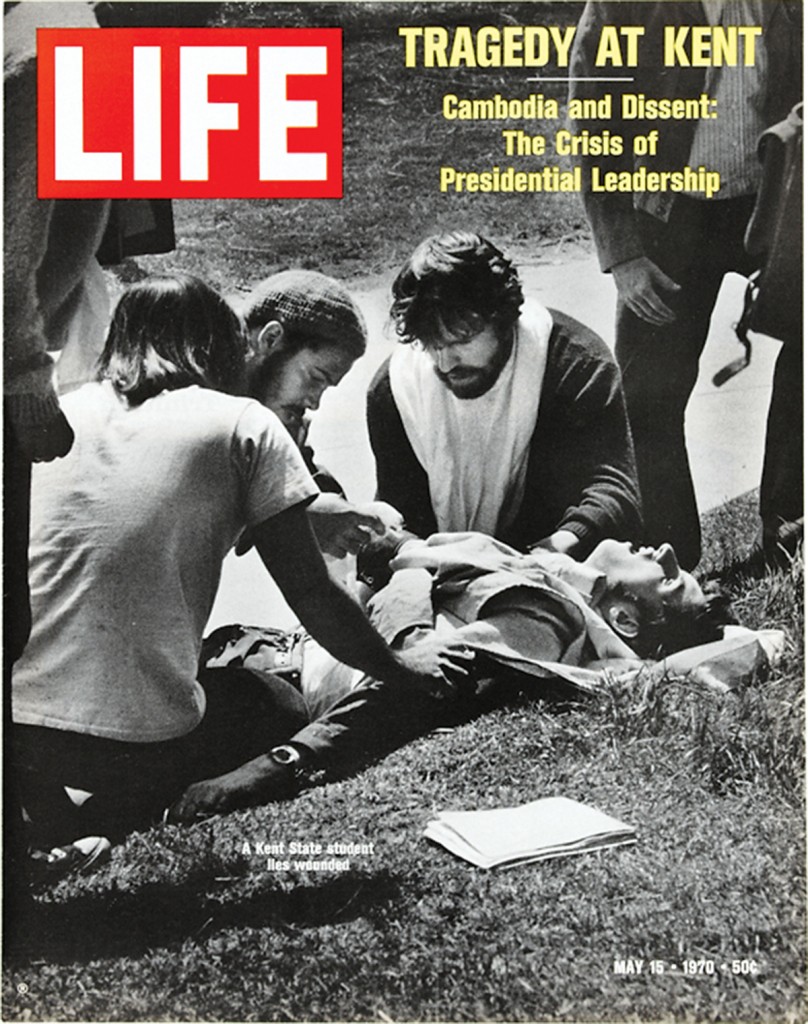 Public assurances of American withdrawal, however, masked a dramatic escalation of conflict. Looking to incentivize peace talks, Nixon pursued a “madman strategy” of attacking communist supply lines across Laos and Cambodia, hoping to convince the North Vietnamese that he would do anything to stop the war. Conducted without public knowledge or Congressional approval, the bombings failed to spur the peace process and talks stalled before the American imposed November 1969 deadline. News of the attacks renewed anti-war demonstrations. Police and National Guard troops killed six students in separate protests at Jackson State University in Mississippi, and, more famously, Kent State University in Ohio in 1970.

Another three years passed—and another 20,000 American troops died—before an agreement was reached. After Nixon threatened to withdraw all aid and guaranteed to enforce a treaty militarily, the North and South Vietnamese governments signed the Paris Peace Accords in January of 1973, marking the official end of U. S. force commitment to the Vietnam War. Peace was tenuous, and when war resumed North Vietnamese troops quickly overwhelmed Southern forces. By 1975, despite nearly a decade of direct American military engagement, Vietnam was united under a communist government.

The fate of South Vietnam illustrates of Nixon’s ambivalent legacy in American foreign policy. By committing to peace in Vietnam, Nixon lengthened the war and widened its impact. Nixon and other Republicans later blamed the media for America’s defeat, arguing that negative reporting undermined public support for the war. In 1971, the Nixon administration tried unsuccessfully to sue the New York Times and the Washington Post to prevent the publication of the Pentagon Papers, a confidential and damning history of U. S. involvement in Vietnam that was commissioned by the Defense Department and later leaked. Nixon faced a rising tide of congressional opposition to the war, led by prominent senators such as William Fulbright. Congress asserted unprecedented oversight of American war spending. And in 1973, Congress passed the War Powers Resolution, which dramatically reduced the president’s ability to wage war without congressional consent.

The Vietnam War profoundly shaped domestic politics. Moreover, it poisoned Americans’ perceptions of their government and its role in the world. And yet, while the anti-war demonstrations attracted considerable media attention and stand as a hallmark of the sixties counterculture so popularly remembered today, many Americans nevertheless continued to regard the war as just. Wary of the rapid social changes that reshaped American society in the 1960s and worried that anti-war protests further threatened an already tenuous civil order, a growing number of Americans criticized the protests and moved closer to a resurgent American conservatism that brewed throughout the 1970s.