President Franklin D. Roosevelt and his administration had encouraged all able-bodied American women to help the war effort. He considered the role of women in the war critical for American victory and the public expected women to assume various functions to free men for active military service. While the majority of women opted to remain at home or volunteer with charitable organizations, many went to work or donned a military uniform.

World War II brought unprecedented labor opportunities for American women. Industrial labor, an occupational sphere dominated by men, shifted in part to women for the duration of wartime mobilization. Women applied for jobs in converted munitions factories. The iconic illustrated image of “Rosie the Riveter,” a muscular woman dressed in coveralls with her hair in a kerchief and inscribed with the phrase, “We Can Do It!” would come stand for female factory labor during the war. But women also worked in various auxiliary positions for the government. Although often a traditionally gendered female occupation, over a million administrative jobs at the local, state, and national levels were transferred from men to women for the duration of the war. 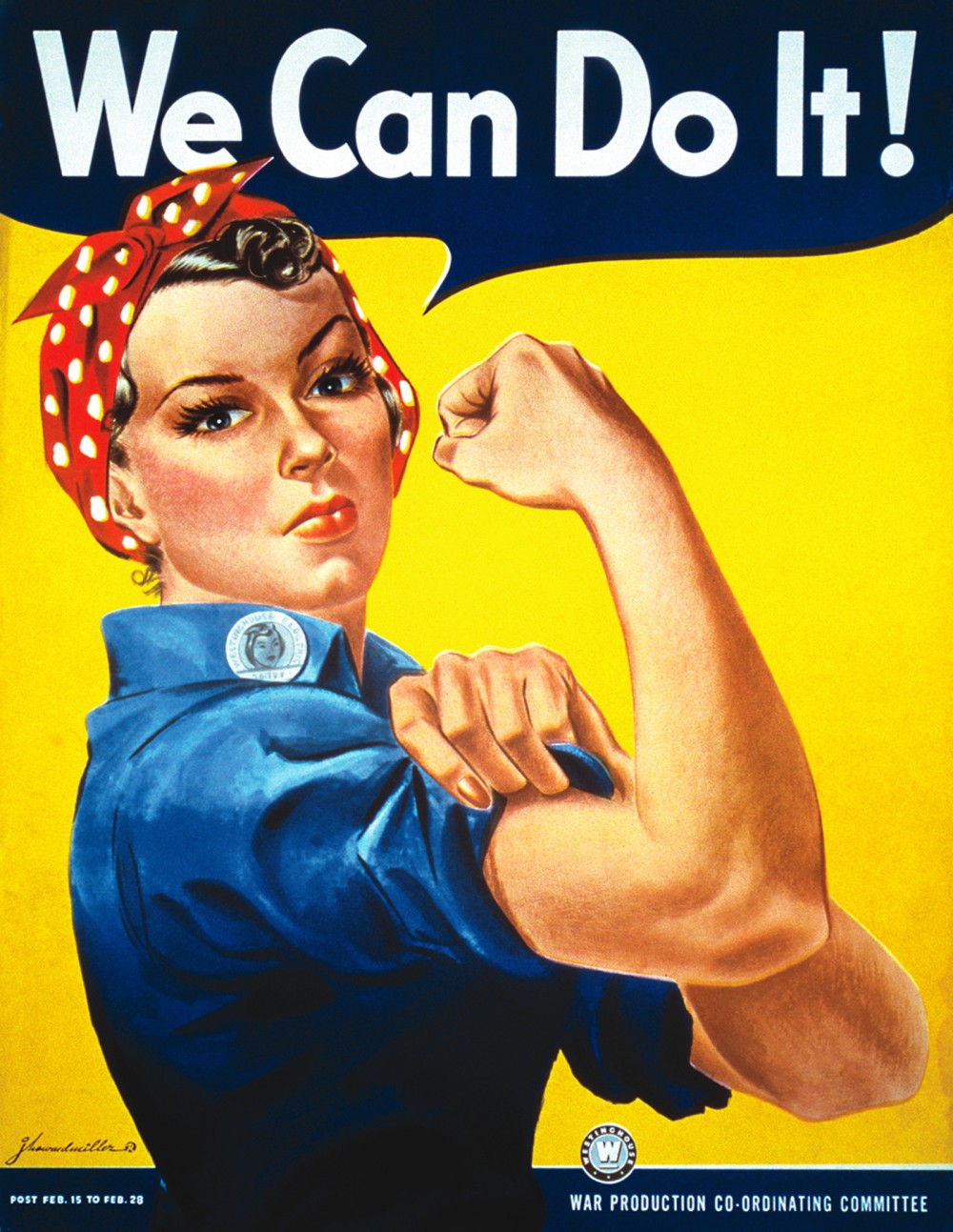 Women came into the workforces in greater numbers than ever before during WWII. With vacancies left by deployed men and new positions created by war production, posters like this iconic “We Can Do It!” urged women to support the war effort by going to work in America’s factories. Poster for Westinghouse, 1942. Wikimedia.

For women who elected not to work, many volunteer opportunities presented themselves. The American Red Cross, the largest charitable organization in the nation, encouraged women to volunteer with local city chapters. Millions of females organized community social events for families, packed and shipped almost a half million ton of medical supplies overseas, and prepared twenty-seven million care packages of nonperishable items for American and other Allied prisoners of war. The American Red Cross further required all women volunteers to certify as nurse’s aides, providing an extra benefit and work opportunity for hospital staffs that suffered severe manpower losses. Other charity organizations, such as church and synagogue affiliates, benevolent associations, and social club auxiliaries, gave women further outlets for volunteer work.

Military service was another option for women who wanted to join the war effort. Over 350,000 women served in several all-female units of the military branches. The Army and Navy Nurse Corps Reserves, the Women’s Army Auxiliary Corps, the Navy’s Women Accepted for Volunteer Emergency Service, the Coast Guard’s SPARs (named for the Coast Guard motto,  Semper Paratus, “Always Ready”), and Marine Corps units gave women the opportunity to serve as either commissioned officers or enlisted members at  military bases at home and abroad. The Nurse Corps Reserves alone commissioned 105,000 Army and Navy nurses recruited by the American Red Cross. Military nurses worked at base hospitals, mobile medical units, and onboard hospital “mercy” ships.

Jim Crow segregation in both the civilian and military sectors remained a problem for black women who wanted to join the war effort. Even after President Roosevelt signed Executive Order 8802 in 1941, supervisors that hired black women still often relegated them to the most menial tasks on factory floors. Segregation was further upheld in factory lunchrooms and many black women were forced to work at night to keep them separate from whites. In the military, only the Women’s Army Auxiliary Corps and the Nurse Corps Reserves accepted black women for active service, and the Army set a limited quota of ten percent of total end strength for black female officers and enlisted women and segregated black units on active duty. The American Red Cross, meanwhile, recruited only four hundred black nurses for the Army and Navy Nurse Corps Reserves, and black Army and Navy nurses worked in segregated military hospitals on bases stateside and overseas.

And for all of the postwar celebration of Rosie the Riveter, after the war ended the men returned and most women voluntarily left the work force or lost their jobs. Meanwhile, former military women faced a litany of obstacles in obtaining veteran’s benefits during their transition to civilian life. The nation that beckoned the call for assistance to millions of women during the four-year crisis hardly stood ready to accommodate their postwar needs and demands.