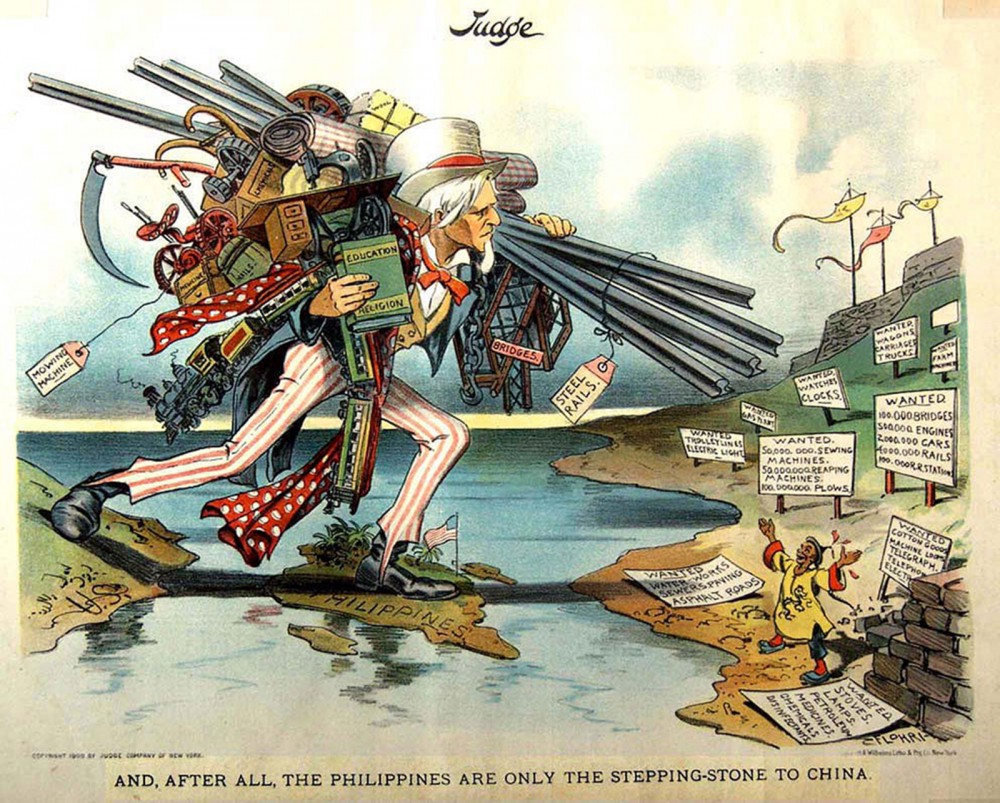 Uncle Sam, loaded with implements of modern civilization, uses the Philippines as a stepping-stone to get across the Pacific to China (represented by a small man with open arms), who excitedly awaits Sam’s arrival. With the expansionist policy gaining greater traction, the possibility for more imperialistic missions (including to conflict-ridden China) seemed strong. The cartoon might be arguing that such endeavors are worthwhile, bringing education, technological, and other civilizing tools to a desperate people. On the other hand, it could be read as sarcastically commenting on America’s new propensity to “step” on others. “AND, AFTER ALL, THE PHILIPPINES ARE ONLY THE STEPPING-STONE TO CHINA,” in Judge Magazine, 1900 or 1902. Wikimedia.

Although the United States had a long history of international economic, military, and cultural engagement that stretched back deep into the eighteenth century, the Spanish-American and Philippine-American Wars (1898-1902) marked a crucial turning point in American interventions abroad. In pursuing war with Spain, and then engaging in counterrevolutionary conflict in the Philippines, the United States expanded the scope and strength of its global reach. Over the next two decades, the U.S. would become increasingly involved in international politics, particularly in Latin America. These new conflicts and ensuing territorial problems forced Americans to confront the ideological elements of imperialism. Should the United States act as an empire? Or were foreign interventions and the taking of territory antithetical to its founding democratic ideals? What exactly would be the relationship between the US and its territories? And could colonial subjects be successfully and safely incorporated into the body politic as American citizens? The Spanish-American and Philippine-American Wars brought these questions, which had always lurked behind discussions of American expansion, out into the open.

In 1898, Americans began in earnest to turn their attention southward to problems plaguing their neighbor Cuba. Since the middle of the nineteenth century, Cubans had tried unsuccessfully  again and again to gain independence from Spain. The latest uprising, and the one that would prove fatal to Spain’s colonial designs, began in 1895 and was still raging in the winter of 1898. By that time, in an attempt to crush the uprising, Spanish general Valeriano Weyler y Nicolau had been conducting a policy of reconcentration—forcing Cubans living in certain cities to relocate en masse to military camps—for about two years. Prominent newspaper publishers sensationalized Spanish atrocities. Cubans in the United States and their allies raised cries of Cuba Libre! And While the United States government proclaimed a wish to avoid armed conflict with Spain, President McKinley became increasingly concerned about the safety of American lives and property in Cuba. He ordered the battleshipMaine to Havana harbor in January 1898.

The Maine sat undisturbed in the harbor for about two weeks. Then, on the evening of February 15, a titanic explosion tore open the ship and sent it to the bottom of the ocean. Three-quarters of the ship’s 354 occupants died. A naval board of inquiry immediately began an investigation to ascertain the cause of the explosion, but the loudest Americans had already decided that Spanish treachery was to blame. Capitalizing on the outrage, “yellow journals”—newspapers that promoted sensational stories, notoriously at the cost of accuracy—such as William Randolph Hearst’s New York Journal called for war with Spain. When urgent negotiations failed to produce a mutually agreeable settlement, Congress officially declared war on April 25.

Although America’s war effort began haphazardly, Spain’s decaying military crumbled. Military victories for the United States came quickly. In the Pacific, on May 1, Commodore George Dewey engaged the Spanish fleet outside of Manila, the capital of the Philippines (another Spanish colonial possession), destroyed it, and proceeded to blockade Manila harbor. Two months later, American troops took Cuba’s San Juan Heights in what would become the most well-known battle of the war, winning fame not for regular soldiers but for the irregular, particularly Theodore Roosevelt and his Rough Rides. Roosevelt had been the Assistant Secretary of the Navy but had resigned his position in order to see action in the war. His actions in Cuba made him a national celebrity. As disease began to eat away at American troops, the Spanish suffered the loss of Santiago de Cuba on July 17, effectively ending the war. The two nations agreed to a cease-fire on August 12 and formally signed the Treaty of Paris in December. The terms of the treaty stipulated, among other things, that the United States would acquire Spain’s former holdings of Guam, Puerto Rico, and the Philippines.

Secretary of State John Hay memorably referred to the conflict as a “splendid little war,” and at the time it certainly appeared that way. Fewer than four hundred Americans died in battle in a war that lasted about fifteen weeks. Contemporaries celebrated American victories as the providential act of God. The influential Brooklyn minister Lyman Abbott, for instance, declared that Americans were “an elect people of God” and saw divine providence in Dewey’s victory at Manila. Some, such as Senator Albert J. Beveridge of Indiana, took matters one step further, seeing in American victory an opportunity for imperialism. In his view, America had a “mission to perform” and a “duty to discharge” around the world. What Beveridge envisioned was nothing less than an American empire. 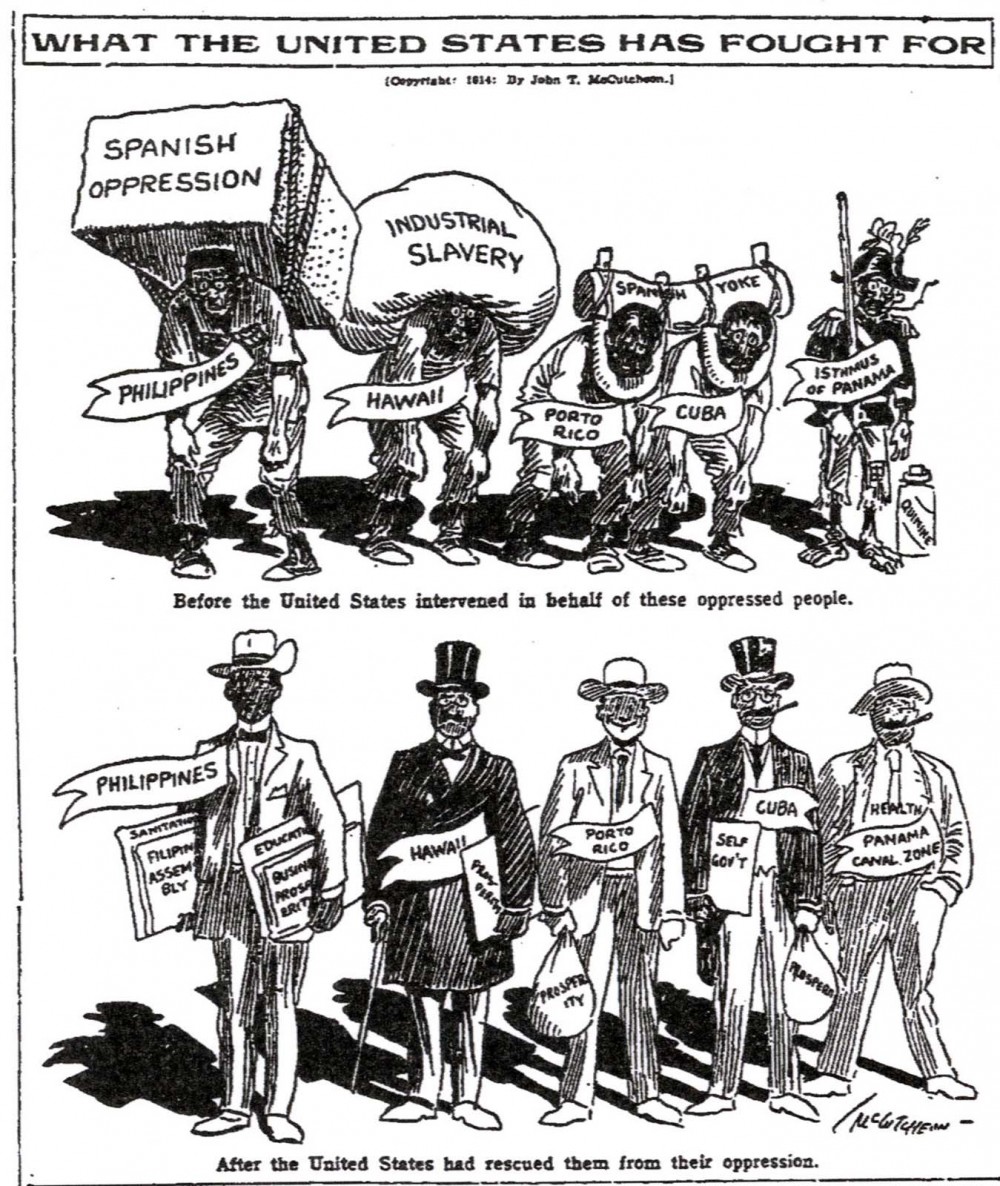 A propagandistic image, this political cartoon shows a before and after: the Spanish colonies before intervention by America and those same former colonies after. The differences are obvious and exaggerated, with the top figures described as “oppressed” by the weight of industrial slavery until America “rescued” them, thereby turning them into the respectable and successful businessmen seen on the bottom half. Those who claimed that American imperialism brought civilization and prosperity to destitute peoples used visuals like these, as well as photographic and textual evidence, to support their beliefs. “What the United States has Fought For,” in Chicago Tribune, 1914. Wikimedia.

But should the United States become an empire? That question was sharply debated across the nation in the aftermath of the Spanish-American War and the acquisition of Hawaii in July 1898. At the behest of American businessmen who had overthrown the Hawaiian monarchy, the United States annexed the Hawaiian Islands and their rich plantations. Between Hawaii and a number of former Spanish possessions, many Americans coveted the economic and political advantages that increased territory would bring. Those opposed to expansion, however, worried that imperial ambitions did not accord with the nation’s founding ideals. American actions in the Phillippines brought all of these discussions to a head.

The Phillippines were an afterthought of the Spanish-American War, but, when the smoke cleared, the United States found itself in possession of a key foothold in the Pacific. After Dewey’s victory over the Spanish fleet in the Battle of Manila Bay, conversations about how to proceed occupied the attentions of President McKinley, political leaders from both parties, and the popular press. American forces and Philippine forces (under the leadership of Emilio Aguinaldo) were in communication: would the Americans offer their support to the Filipinos and their ongoing efforts against the Spanish? Or would the Americans replace the Spanish as a colonial occupying force? American forces were instructed to secure Manila without allowing Philippine forces to enter the Walled City (the seat of the Spanish colonial government), hinting, perhaps, at things to come. Americans wondered what would happen next. Perhaps a good many ordinary Americans shared the bewildered sentiments of Mr. Dooley, the fictional Irish-American barkeeper whom humorist Finley Peter Dunne used to satirize American life: “I don’t know what to do with th’ Ph’lippeens anny more thin I did las’ summer, befure I heerd tell iv thim…We can’t sell thim, we can’t ate thim, an’ we can’t throw thim into the th’ alley whin no wan is lookin’.”

As debates about American imperialism continued against the backdrop of an upcoming presidential election, tensions in the Philippines escalated. Emilio Aguinaldo was inaugurated as president of the First Philippine Republic (or Malolos Republic) in late January of 1899; fighting between American and Philippine forces began in early February; and in April 1899, Congress ratified the 1898 Treaty of Paris, which concluded the Spanish-American War and gave Spain twenty million dollars in exchange for the Philippine Islands.

Like the Cubans, Filipinos had waged a long war against their Spanish colonizers. The United States could have given them the independence they had long fought for, but, instead, at the behest of President William McKinley, the United States occupied the islands and from 1899-1902 waged a bloody series of conflicts against Filipino insurrectionists that cost far more lives than the war with Spain. Under the leadership of Emilio Aguinaldo, Filipinos who had fought for freedom against the Spanish now fought for freedom against the very nation that had claimed to have liberated them from Spanish tyranny.

The Philippine Insurrection, or the Philippine-American War, was a brutal conflict of occupation and insurgency. Contemporaries compared the guerrilla-style warfare in challenging and unfamiliar terrain to the American experiences in the Indian Wars of the late-nineteenth-century. Many commented on its brutality and the uncertain mission of American troops. An April 1899 dispatch from a Harper’s Weekly correspondent began, “A week has passed—a week of fighting and marching, of jungles and rivers, of incident and adventure so varied and of so rapid transition that to sit down to write about it makes one feel as if he were trying to describe a dream where time, space, and all the logical sequences of ordinary life are upset in the unrelenting brutality of war.” John Bass described his experiences in detail, and his reportage, combined with accounts that came directly from soldiers, helped to shape public knowledge about the war. Reports of cruelty on both sides and a few high profile military investigations ensured continued public attention to events across the Pacific.

Amidst fighting to secure the Philippine Islands, the federal government sent two Philippine Commissions to assess the situation in the islands and make recommendations for a civilian colonial government. A civilian administration, with William H. Taft as the first Governor General (1901-1903), was established with military support. Although President Theodore Roosevelt declared the war to be over in 1902, resistance and occasional fighting continued into the second decade of the twentieth century

Debates about American imperialism dominated headlines and tapped into core ideas about American identity and the proper role of the United States in the larger world. Should a former colony, established on the principles of freedom, liberty, and sovereignty, become a colonizer itself? What was imperialism, anyway? Many framed the Filipino conflict as a Protestant, civilizing mission. Others framed American imperialism in the Philippines as nothing new, as simply the extension of a never-ending westward American expansion. It was simply destiny. Some saw imperialism as a way to reenergize the nation by asserting national authority and power around the globe. Others baldly recognized the opportunities the Philippine Islands presented for access to Asian markets. But critics grew loud. The American Anti-Imperialist League, founded in 1899 and populated by such prominent Americans as Mark Twain, Andrew Carnegie, and Jane Addams, protested American imperial actions and articulated a platform that decried foreign subjugation and upheld the rights of all to self-governance. Still others embraced anti-imperialist stances because of concerns about immigration and American racial identity, afraid that American purity stood imperiled by contact with strange and foreign peoples. For whatever reason, however, the onset or acceleration of imperialism was a controversial and landmark moment in American history. America had become a preeminent force in the world. 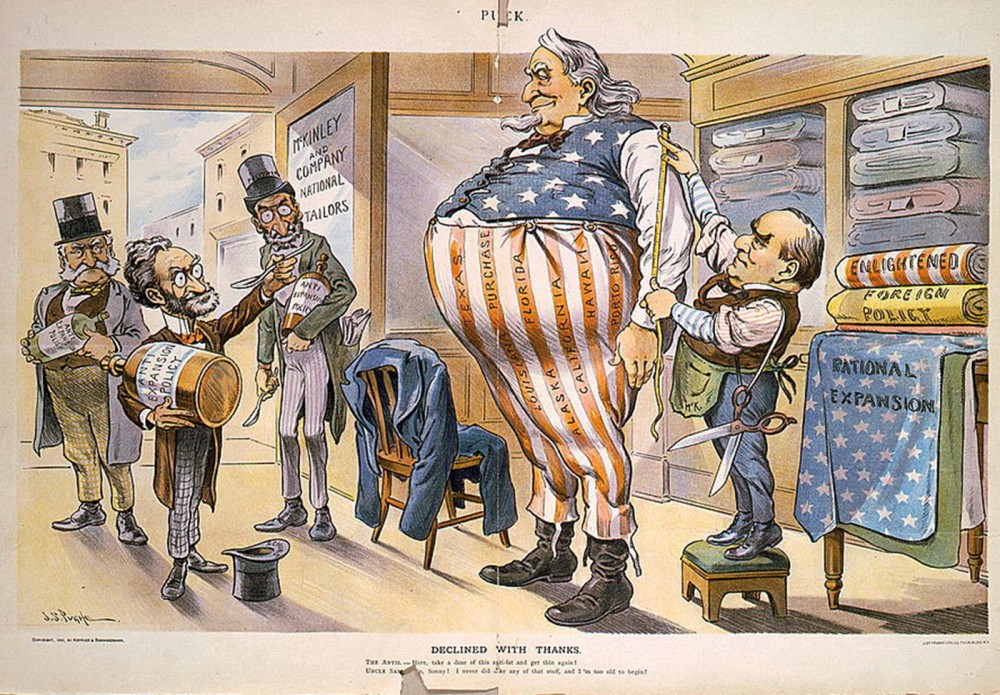 Tailor President McKinley measures an obese Uncle Sam for larger clothing, while Anti-Expansionists like Joseph Pulitzer unsuccessfully offer Sam a weight-loss elixir. As the nation increased its imperialistic presence and mission, many like Pulitzer worried that America would grow too big for its own good. John S. Pughe, “Declined With Thanks,” in Puck (September 5, 1900). Wikimedia.