Aftermath of World War I

The war transformed the world. It drastically changed the face of the Middle East, for instance. For centuries the Ottoman Empire had shaped life in the region. Before the war, the Middle East had three main centers of power: Egypt, the Ottoman Empire, and Iran. President Wilson’s call for self-determination appealed to many under the Ottoman Empire’s rule. In the aftermath of the war, Wilson sent a commission to investigate the region to determine the conditions and aspirations of the populace. The King-Crane Commission found that most of the inhabitants favored an independent state free of European control. However, these wishes were largely ignored, and the lands of the former Ottoman Empire divided into mandates through the Treaty of Sevres at the San Remo Conference in 1920. The Ottoman Empire disintegrated into several nations, many created in part without regard to ethnic realities by European powers. These Arab provinces were ruled by Britain and France, and the new nation of Turkey emerged from the former heartland of Anatolia. According to the League of Nations, mandates “were inhabited by peoples not yet able to stand by themselves under the strenuous conditions of the modern world.” Though allegedly for the benefit of the people of the Middle East, the mandate system was essentially a reimagined form of nineteenth-century imperialism. France received Syria; Britain took control of Iraq, Palestine, and Transjordan (Jordan). The United States was asked to become a mandate power, but declined. The geographical realignment of the Middle East also included the formation of two new nations: the Kingdom of Hejaz and Yemen. (The Kingdom of Hejaz was ruled by Sharif Hussein and only lasted until the 1920s when it became part of Saudi Arabia.)

The fates of Nicola Sacco and Bartolomeo Vanzetti, two Italian-born anarchists who were convicted of robbery and murder in 1920, reflected the Red Scare in American society that followed the Russian Revolution in 1917. Their arrest, trial, and execution inspired many leftists and dissenting artists to express their sympathy with the accused, such as in Maxwell Anderson’s Gods of the Lightning or Upton Sinclair’s Boston. The Sacco-Vanzetti demonstrated a newly exacerbated American nervousness about immigrants’ and the potential spread of radical ideas, especially those related to international communism after the Russian Revolution.

When in March 1918 the Bolsheviks signed a separate peace treaty with Germany, the Allies planned to send troops to northern Russia and Siberia prevent German influence and fight the Bolshevik revolution. Wilson agreed, and, in a little-known foreign intervention, American troops remained in Russia as late as 1920. Although the Bolshevik rhetoric of self-determination followed many of the ideals of Wilson’s Fourteen Points—Vladimir Lenin supported revolutions against imperial rule across the world—imperialism and anti-communism could not be so easily undone by vague ideas of self-rule. 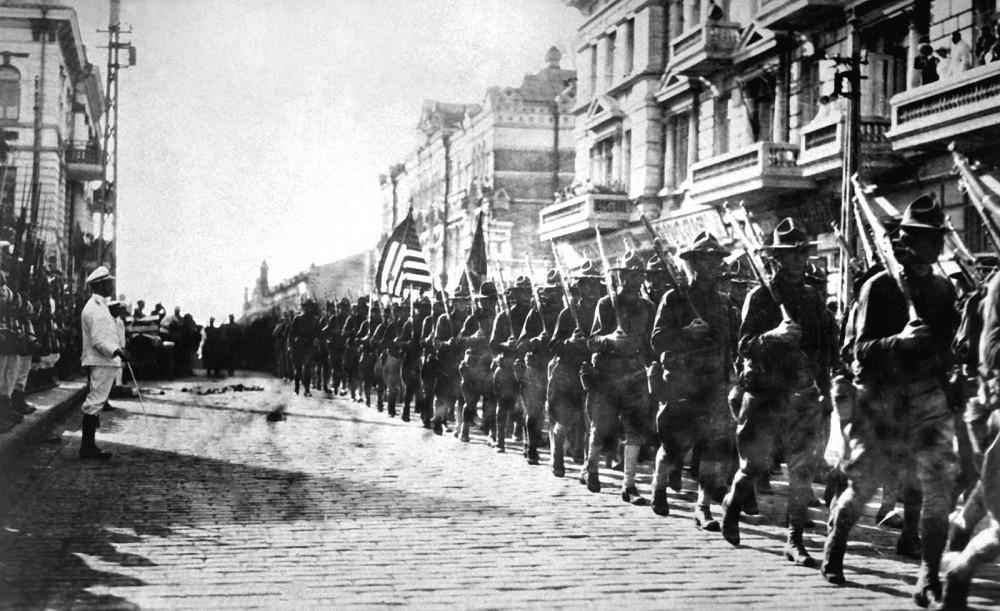 While still fighting in WWI, President Wilson sent American troops to Siberia during the Russian Civil War for reasons both diplomatic and military. This photograph shows American soldiers in Vladivostok parading before the building occupied by the staff of the Czecho-Slovaks (those opposing the Bolsheviks). To the left, Japanese marines stand to attention as the American troops march. Photograph, August 1, 1918. Wikimedia.

At home, the United States grappled with harsh postwar realities. Racial tensions culminated in the Red Summer of 1919 when violence broke out in at least twenty-five cities, including Chicago and Washington, D.C. The riots originated from wartime racial tensions. Industrial war production and massive wartime service created vast labor shortages and thousands of southern blacks travelled to the North and Midwest to escape the traps of southern poverty. But the so-called Great Migration sparked significant racial conflict as local whites and returning veterans fought to reclaim their jobs and their neighborhoods from new black migrants.

But many American blacks, who had fled the Jim Crow South and traveled halfway around the world to fight for the United States, would not so easily accede to postwar racism. The overseas experience of black Americans and their return triggered a dramatic change in black communities. W.E.B. DuBois wrote boldly of returning soldiers: “We return. We return from fighting. We return fighting. Make way for Democracy!” But white Americans desired a return to the status quo, a world that did not include social, political, or economic equality for black people.

In 1919 America suffered through the “Red Summer.” Riots erupted across the country from April until October. The massive bloodshed during included thousands of injuries, hundreds of deaths, and a vast destruction of private and public property across the nation. The Chicago Riot, from July 27 to August 3, 1919, considered the summer’s worst, sparked a week of mob violence, murder, and arson. Race riots had rocked the nation, but the Red Summer was something new. Recently empowered blacks actively defended their families and homes, often with militant force. This behavior galvanized many in black communities, but it also shocked white Americans who alternatively interpreted black resistance as a desire for total revolution or as a new positive step in the path toward black civil rights. In the riots’ aftermath, James Weldon Johnson wrote, “Can’t they understand that the more Negroes they outrage, the more determined the whole race becomes to secure the full rights and privileges of freemen?” Those six hot months in 1919 forever altered American society and roused and terrified those that experienced the sudden and devastating outbreaks of violence.