As tension continued to mount in cities through the decade, the tone of the civil rights movement changed yet again. Activists became less conciliatory in their calls for civil rights progress, embracing the more militant message of the burgeoning Black Power Movement and the late Malcolm X, a Nation of Islam (NOI) minister who had encouraged African Americans to pursue freedom, equality, and justice by “any means necessary.” Prior to his death, Malcolm X and the NOI emerged as the radical alternative to the racially integrated, largely Protestant approach of the Martin Luther King, Jr.-led civil rights movement. Malcolm advocated armed resistance in defense for the safety and well being of black Americans, stating, “I don’t call it violence when it’s self-defense, I call it intelligence.” For his part, King and leaders from more mainstream organizations like the NAACP and the Urban League criticized both Malcolm X and the NOI for what they perceived to be racial demagoguery. King believed Malcolm’s speeches were a “great disservice” to black Americans, claiming that X’s speeches lamented the problems of African Americans without offering solutions. The differences between Dr. King and Malcolm X represented a core ideological tension that would inhabit black political thought throughout the 1960s and 1970s. 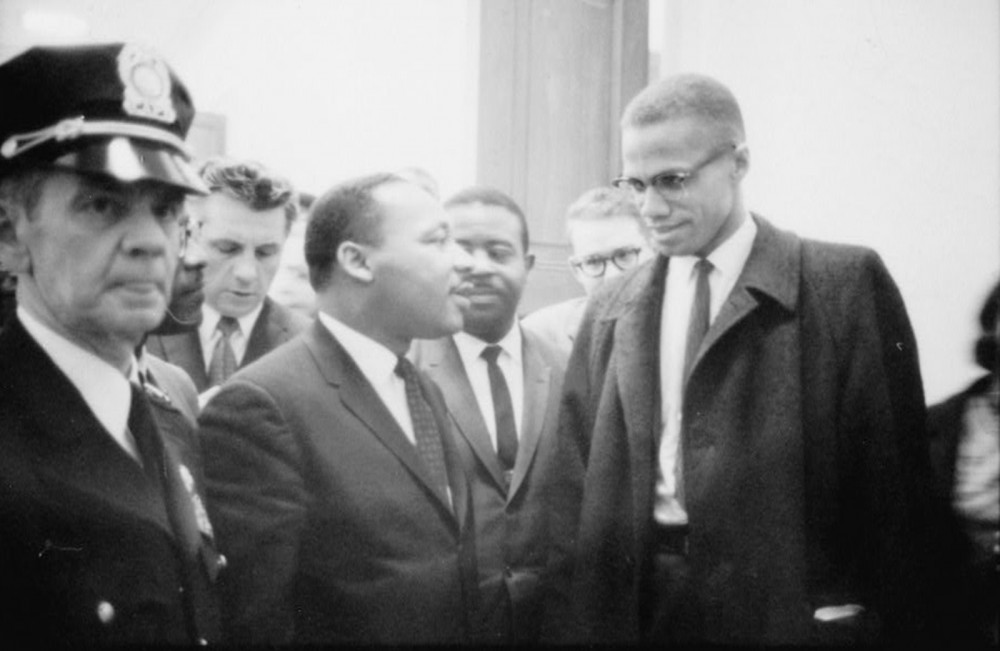 Like Booker T. Washington and W.E.B. Du Bois before them, Martin Luther King, Jr., and Malcolm X represented two styles of racial uplift while maintaining the same general goal of ending racial discrimination. How they would get to that goal is where the men diverged. Marion S. Trikosko, “[Martin Luther King and Malcolm X waiting for press conference],” March 26, 1964. Library of Congress.

By the late 1960s, the Student Nonviolent Coordinating Committee, led by figures such as Stokely Carmichael, had expelled its white members and shunned the interracial effort in the rural South, focusing instead on injustices in northern urban areas. After President Johnson refused to take up the cause of the black delegates in the Mississippi Freedom Democratic Party at the 1964 Democratic National Convention, SNCC activists became frustrated with institutional tactics and turned away from the organization’s founding principle of nonviolence over the course of the next year. This evolving, more aggressive movement called for African Americans to play a dominant role in cultivating black institutions and articulating black interests rather than relying on interracial, moderate approaches. At a June 1966 civil rights march, Carmichael told the crowd, “What we gonna start saying now is black power!” The slogan not only resonated with audiences, it also stood in direct contrast to King’s “Freedom Now!” campaign. The political slogan of black power could encompass many meanings, but at its core stood for the self-determination of blacks in political, economic, and social organizations. 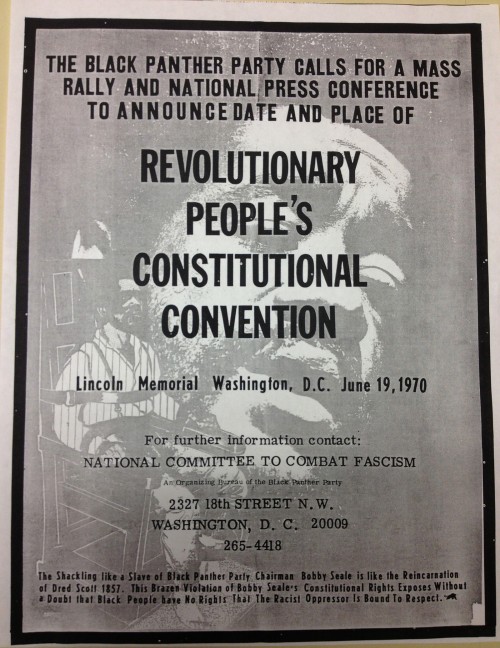 The Black Panther Party used radical and incendiary tactics to bring attention to the continued oppression of blacks in America. Read the bottom paragraph on this rally poster carefully. Wikimedia.

While Carmichael asserted that “black power meant black people coming together to form a political force,” to many it also meant violence. In 1966, Huey Newton and Bobby Seale formed the Black Panther Party in Oakland, California. The Black Panthers became the standard-bearers for direct action and self-defense, using the concept of “decolonization” in their drive to liberate black communities from white power structures. The revolutionary organization also sought reparations and exemptions for black men from the military draft. Citing police brutality and racist governmental policies, the Panthers aligned themselves with the “other people of color in the world” against whom America was fighting abroad. Although it was perhaps most well-known for its open display of weapons, military-style dress, and black nationalist beliefs, the Party’s 10-Point Plan also included employment, housing, and education. The Black Panthers worked in local communities to run “survival programs” that provided food, clothing, medical treatment, and drug rehabilitation. They focused on modes of resistance that empowered black activists on their own terms.

By 1968, the civil rights movement looked quite different from the one that had emerged out of the 1960 Greensboro sit-ins. The movement had never been monolithic, but prominent, competing ideologies had now fractured it significantly. King’s assassination on a Memphis hotel room balcony in April sparked another wave of riots in over 100 American cities and brought an abrupt, tragic end to the life of the movement’s most famous figure. Only a week after his assassination, President Johnson signed the Civil Rights Act of 1968, another significant piece of federal legislation that outlawed housing discrimination. Two months later, on June 6, Robert Kennedy was gunned down in a Los Angeles hotel while campaigning to be the Democratic candidate for President.  The assassinations of both national leaders in succession created a sense of national anger and dissolution.

The frustration prompted dozens of national protest organizations to converge on the Democratic National Convention in Chicago at the end of August. A bitterly fractured Democratic Party gathered to assemble a passable platform and nominate a broadly acceptable presidential candidate. Outside the convention hall, numerous student and radical groups—the most prominent being Students for a Democratic Society and the Youth International Party—identified the conference as an ideal venue for demonstrations against the Vietnam War and planned massive protests in Chicago’s public spaces. Initial protests were peaceful, but the situation quickly soured as police issued stern threats and young people began to taunt and goad officials. Many of the assembled students had protest and sit-in experiences only in the relative safe havens of college campuses, and were unaccustomed to the heavily armed, big-city police force, accompanied by National Guard troops in full riot gear. Attendees recounted vicious beatings at the hands of police and Guardsmen, but many young people—convinced that much public sympathy could be won via images of brutality against unarmed protesters—continued stoking the violence. Clashes spilled from the parks into city streets, and eventually the smell of tear gas penetrated upper floors of the opulent hotels hosting Democratic delegates.

The ongoing police brutality against the protesters overshadowed the convention and culminated in an internationally televised standoff in front of the Hilton Hotel, where policeman beat protestors chanting, “the whole world is watching!” For many on both sides, the Chicago riots engendered a growing sense of the chaos rocking American life. The disparity in force between students and police frightened some radicals out of advocacy for revolutionary violence, while some officers began questioning the war and those who waged it. Many more, though, saw disorder and chaos where once they had seen idealism and progress. Ultimately, the violence of 1968 was not the death knell of a struggle simply for the end of black-white segregation, but rather a moment of transition that pointed to the continuation of past oppression and foreshadowed many of the challenges of the future. At decade’s end, civil rights advocates could take pride in significant gains while acknowledging that many of the nation’s racial issues remained unresolved.