The Conservative insurgency occurred within both major political parties, but the New Right gradually coalesced under the Republican tent. The heightened appeal of conservatism had several causes. The expansive social and economic agenda of Johnson’s Great Society reminded anti-communists of Soviet-style central planning and enflamed fiscal conservatives worried about deficits. Race also drove the creation of the New Right. The civil rights movement, along with the Civil Rights Act and the Voting Rights Act, upended the racial hierarchy of the Jim Crow South. All of these occurred under Democratic leadership, pushing the South toward the Republican Party. In the late 1960s and early 1970s, Black Power, affirmative action, and court-ordered busing of children between schools to achieve racial balance brought “white backlash” to the North, often in cities previously known for political liberalism. To many ordinary Americans, the urban rebellions, antiwar protests, and student uprisings of the late 1960s unleashed social chaos. At the same time, declining wages, rising prices, and growing tax burdens brought economic vulnerability to many working- and middle-class citizens. Liberalism no longer seemed to offer ordinary Americans a roadmap to prosperity, so they searched for new political solutions.

Former Alabama governor and conservative Democrat George Wallace masterfully exploited the racial, cultural, and economic resentments of working-class whites during presidential runs in 1968 and 1972. Wallace’s record as a staunch segregationist made him a hero in the Deep South, where he won five states as a third-party candidate in the 1968 general election. Wallace’s populist message also resonated with blue-collar voters in the industrial North who felt left behind by the rights revolution. On the campaign stump, the fiery candidate lambasted hippies, anti-war protestors, and government bureaucrats. He assailed female welfare recipients for “breeding children as a cash crop” and ridiculed “over-educated, ivory-tower” intellectuals who “don’t know how to park a bicycle straight.” Yet, Wallace also advanced progressive proposals for federal job training programs, a minimum wage hike, and legal protections for collective bargaining. Running as a Democrat in 1972 (and with anti-busing rhetoric as a new arrow in his quiver), Wallace captured the Michigan primary and polled second in Wisconsin, Pennsylvania, and Indiana. In May 1972 an assassin’s bullet left Wallace paralyzed and ended his campaign. Nevertheless, his amalgamation of older, New Deal-style proposals and conservative populism emblemized the rapid re-ordering of party loyalties in the late ’60s and early ’70s. Richard Nixon similarly harnessed the New Right’s sense of grievance through his rhetoric about “law and order” and the “silent majority.” But the New Right remained restive under Nixon and his Republican successor, Gerald Ford.

Religious conservatives also felt themselves under siege from liberalism. In the early 1960s, the Supreme Court decisions prohibiting teacher-led prayer (Engel v. Vitale) and Bible reading in public schools (Abington v. Schempp) led some on the right to conclude that a liberal judicial system threatened Christian values. In the following years, the counterculture’s celebration sex and drugs, along with relaxed obscenity and pornography laws, intensified the conviction that “permissive” liberalism encouraged immorality in private life. Evangelical Protestants—Christians who professed a personal relationship with Jesus Christ, upheld the Bible as an infallible source of truth, and felt a duty to convert, or evangelize, nonbelievers—comprised the core of the so-called “religious right.” The movement also drew energy from devout Catholics. The development of the religious right was not inevitable for several reasons. First, many evangelicals had for decades eschewed politics in favor of spiritual matters; moreover, evangelicalism did not necessarily lead to conservative politics (Democrat Jimmy Carter was an evangelical). Second, Roman Catholics had a long record of loyalty to the Democratic Party. Third, the alliance between evangelicals and Catholics had to overcome decades of mutual antagonism. Only the common enemy of liberalism brought the groups together.

Activists like Schlafly and LaHaye valorized motherhood as the highest calling of all women and abortion therefore struck at the core of female identity. More than perhaps any other issue, abortion drew different segments of the religious right—Catholics and Protestants, women and men—together. The Supreme Court’s 1973 Roe v. Wade ruling outraged many devout Catholics, including Long Island housewife and political novice Ellen McCormack. In 1976, McCormack entered the Democratic presidential primaries in an unsuccessful attempt to steer the party to a pro-life position. Roe v. Wade also intensified anti-abortion sentiment among evangelicals (who had been less universally opposed to the procedure than their Catholic counterparts). Christian author Francis Schaeffer cultivated evangelical opposition to abortion through the 1979 documentary film Whatever Happened to the Human Race? arguing that the “fate of the unborn is the fate of the human race.” With the procedure framed in stark, existential terms, many evangelicals felt compelled to combat the procedure through political action. 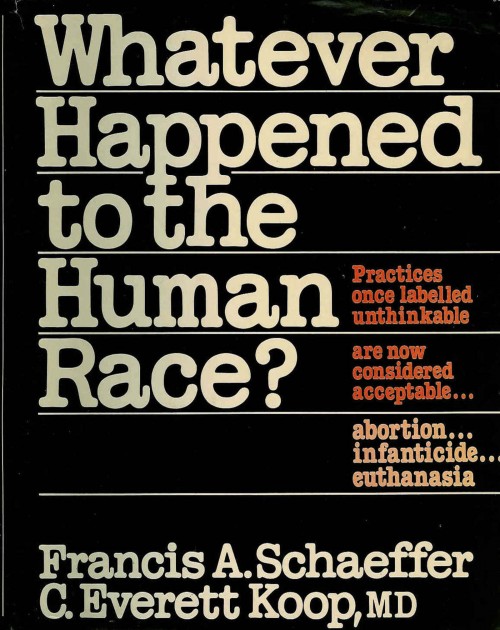 This book cover succinctly demonstrates the mindset of many conservatives in the Reagan era: what happened to the human race? University of Wales.

Grassroots passion drove anti-abortion activism, but a set of religious and secular institutions turned the various strands of the New Right into a sophisticated movement.

In 1979 Jerry Falwell—a Baptist minister and religious broadcaster from Lynchburg, Virginia—founded the Moral Majority, an explicitly political organization dedicated to advancing a “pro-life, pro-family, pro-morality, and pro-American” agenda. Business-oriented institutions also joined the attack on liberalism, fueled by stagflation and by the federal government’s creation of new regulatory agencies like the Environmental Protection Agency and the Occupational Safety and Health Administration. Conservative business leaders bankrolled new “think tanks” like the Heritage Foundation and the Cato Institute. These organizations provided grassroots activists with ready-made policy prescriptions. Other business leaders took a more direct approach by hiring Washington lobbyists and creating Political Action Committees (PACs) to press their agendas in the halls of Congress and federal agencies. Between 1976 and 1980 the number of corporate PACS rose from under 300 to over 1200.

Grassroots activists and business leaders received unlikely support from a circle of “neoconservatives”—disillusioned intellectuals who had rejected liberalism and become Republicans. Irving Kristol, a former Marxist who championed free-market capitalism as a Wall Street Journal columnist, defined a neoconservative as a “liberal who has been mugged by reality.” Neoconservative journals like Commentary and Public Interest argued that the Great Society had proven counterproductive, perpetuating the poverty and racial segregation that it aimed to cure. By the middle of the 1970s, neoconservatives felt mugged by foreign affairs as well. As ardent Cold Warriors, they argued that Nixon’s policy of détente left the United States vulnerable to the Soviet Union.

In sum, several streams of conservative political mobilization converged in the late 1970s. Each wing of the burgeoning conservative movement—disaffected blue-collar workers, white Southerners, evangelicals and devout Catholics, business leaders, disillusioned intellectuals, and Cold War hawks—turned to the Republican Party as the most effective vehicle for their political counter-assault on liberalism and the New Deal political order. After years of mobilization, the domestic and foreign policy catastrophes of the Carter administration provided the head winds that brought the conservative movement to shore.