Decolonization and the Global Reach of the ‘American Century’

In an influential 1941 Life magazine editorial titled “The American Century,” publishing magnate Henry Luce, envisioning the US as a “dominant world power,” outlined his “vision of America as the principal guarantor of freedom of the seas” and “the dynamic leader of world trade.” In his embrace of an American-led international system, the conservative Luce was joined by liberals including historian Arthur Schlesinger, who in his 1949 Cold War tome The Vital Center, proclaimed that a “world destiny” had been “thrust” upon the United States, with perhaps no other nation becoming “a more reluctant great power.” Emerging from the war as the world’s preeminent military and economic force, the US was perhaps destined to compete with the Soviet Union for influence in the Third World, where a power vacuum had been created by the demise of European imperialism. As France and Britain in particular struggled in vain to control colonies in Asia, the Middle East, and North Africa, the United States assumed responsibility for maintaining order and producing a kind of “pax-Americana.” Little of the postwar world, however, would be so peaceful.

Based on the logic of militarized containment established by NSC-68 and American Cold War strategy, interventions in Korea and Vietnam were seen as appropriate American responses to the ascent of communism in China. Unless Soviet power in Asia was halted, Chinese influence would ripple across the continent, and one country after another would “fall” to communism. Easily transposed onto any region of the world, the “Domino Theory” became a standard basis for the justification of US interventions abroad, such as in Cuba after 1959, which was seen as a communist beachhead that imperiled Latin America, the Caribbean, and perhaps eventually the United States. Like Ho Chi Minh, Cuban leader Fidel Castro was a revolutionary nationalist whose career as a communist began in earnest after he was rebuffed by the United States and American interventions targeted nations that never espoused official communist positions. Many interventions in Asia, Latin America, and elsewhere were driven by factors that were shaped by but also that transcended anti-communist ideology. 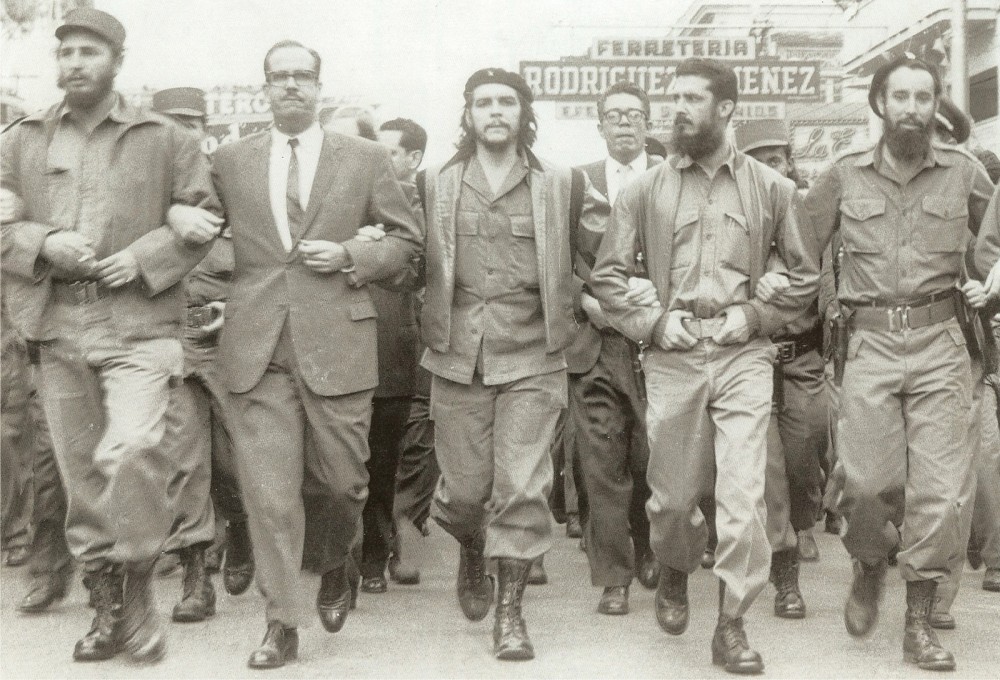 The Cuban Revolution seemed to confirm the fears of many Americans that the spread of communism could not be stopped. It is believed that American government intervened in the new government of Fidel Castro in covert ways, and many attribute the La Coubre explosion to the American Central Intelligence Agency. In this photograph, Castro and Cuban revolutionary Che Guevara march in a memorial for those killed in the explosion in March, 1960 in Havana Cuba. Wikimedia.

Instead of dismantling its military after World War II, as the United States had after eveyr major conflict, the Cold War facilitated a new permanent defense establishment. Federal investments in national defense affected the entire country. Different regions housed various sectors of what sociologist C. Wright Mills, in 1956, called the “permanent war economy.” The aerospace industry was concentrated in areas like Southern California and Long Island, New York; Massachusetts was home to several universities that received major defense contracts; the Midwest became home base for intercontinental ballistic missiles pointed at the Soviet Union; many of the largest defense companies and military installations were concentrated in the South, so much so that in 1956 author William Faulkner, who was born in Mississippi, remarked, “Our economy is the Federal Government.”

A radical critic of US policy, Mills was one of the first thinkers to question the effects of massive defense spending, which, he said, corrupted the ruling class, or “power elite,” who now had the potential to take the country into war for the sake of corporate profits. Yet perhaps the most famous critique of the entrenched war economy came from an unlikely source. During his farewell address to the nation in January 1961, President Eisenhower cautioned Americans against the “unwarranted influence” of a “permanent armaments industry of vast proportions” which could threaten “liberties” and “democratic processes.” While the “conjunction of an immense military establishment and a large arms industry” was a fairly recent development, this “military-industrial complex” had cultivated a “total influence,” which was “economic, political, even spiritual…felt in every city…Statehouse … [and] office of the Federal government.” There was, he said, great danger in failing to “comprehend its grave implications.”

In Eisenhower’s formulation, the “military-industrial complex” referred specifically to domestic connections between arms manufactures, members of Congress, and the Department of Defense. Yet the new alliance between corporations, politicians, and the military was dependent on having an actual conflict to wage, without which there could be no ultimate financial gain. To critics, military-industrial partnerships at home were now linked to US interests abroad. Suddenly American foreign policy had to ensure foreign markets and secure favorable terms for American trade all across the globe. Seen in such a way, the Cold War was just a bi-product of America’s new role as the remaining Western superpower. Regardless, the postwar rise of US power correlated with what many historians describe as a “national security consensus” that has dominated American policy since World War II. And so the United States was now more intimately involved in world affairs than ever before.

Ideological conflicts and independence movements erupted across the postwar world. More than eighty countries achieved independence, primarily from European control. As it took center stage in the realm of global affairs, the United States played a complicated and often contradictory role in this process of “decolonization.” The sweeping scope of post-1945 US military expansion was unique in the country’s history. Critics believed that the advent of a “standing army,” so feared by many Founders, set a disturbing precedent. But in the postwar world, American leaders eagerly set about maintaining a new permanent military juggernaut and creating viable international institutions.

But what of independence movements around the world? Roosevelt had spoken for many in his remark to British Premier Winston Churchill, in 1941, that it was hard to imagine “fight[ing] a war against fascist slavery, and at the same time not work to free people all over the world from a backward colonial policy.” American postwar foreign policy planners therefore struggled to balance support for decolonization against the reality that national independence movements often posed a threat to America’s global interests.

As American strategy became consumed with thwarting Russian power and the concomitant global spread of communist, to foreign policy officials it increasingly made little difference whether insurgencies or independence movements had direct involvement with the Soviet Union, so long as a revolutionary movement or government could in some way be linked to international communism. The Soviet Union, too, was attempting sway the world. Stalin and his successors pushed an agenda that included not only the creation of Soviet client states in Eastern and Central Europe, but also a tendency to support leftwing liberation movements everywhere, particularly when they espoused anti-American sentiment. As a result, the US and the USSR engaged in numerous proxy wars in the “Third World.”

American planners felt that successful decolonization could demonstrate the superiority of democracy and capitalism against competing Soviet models. Their goal was in essence to develop an informal system of world power based as much as possible on consent (hegemony) rather than coercion (empire). European powers still pushed colonization. American officials feared that anti-colonial resistance would breed revolution and push nationalists into the Soviet sphere. And when faced with such movements, American policy dictated alliances with colonial regimes, alienating nationalist leaders in Asia and Africa.

The architects of American power needed to sway the citizens of decolonizing nations toward the United States. In 1948, Congress passed the Smith-Mundt Act to “promote a better understanding of the United States in other countries.” The legislation established cultural exchanges with various nations, including even the USSR, in order to showcase American values through its artists and entertainers. The Soviets did the same, through what they called an international peace offensive, which by most accounts was more successful than the American campaign. Although making strides through the initiation of various overt and covert programs, US officials still perceived that they were lagging behind the Soviet Union in the “war for hearts and minds.” But as unrest festered in much of the Third World, American officials faced difficult choices.

As American blacks fought for justice at home, prominent American black radicals, including Malcolm X, Paul Robeson, and the aging W.E.B. DuBois, joined in solidarity with the global anti-colonial movement, arguing that the United States had inherited the racist European imperial tradition. Supporters of the Soviet Union made their own effort to win over countries in the non-aligned world, claiming that Marxist-Leninist doctrine offered a roadmap for their liberation from colonial bondage. Moreover, Kremlin propaganda pointed to injustices of the American South as an example of American hypocrisy: how could the United States claim to fight for global freedom when it refused to guarantee freedoms for its own citizenry? In such ways the Cold War connected the black freedom struggle, the Third World, and the global Cold War. 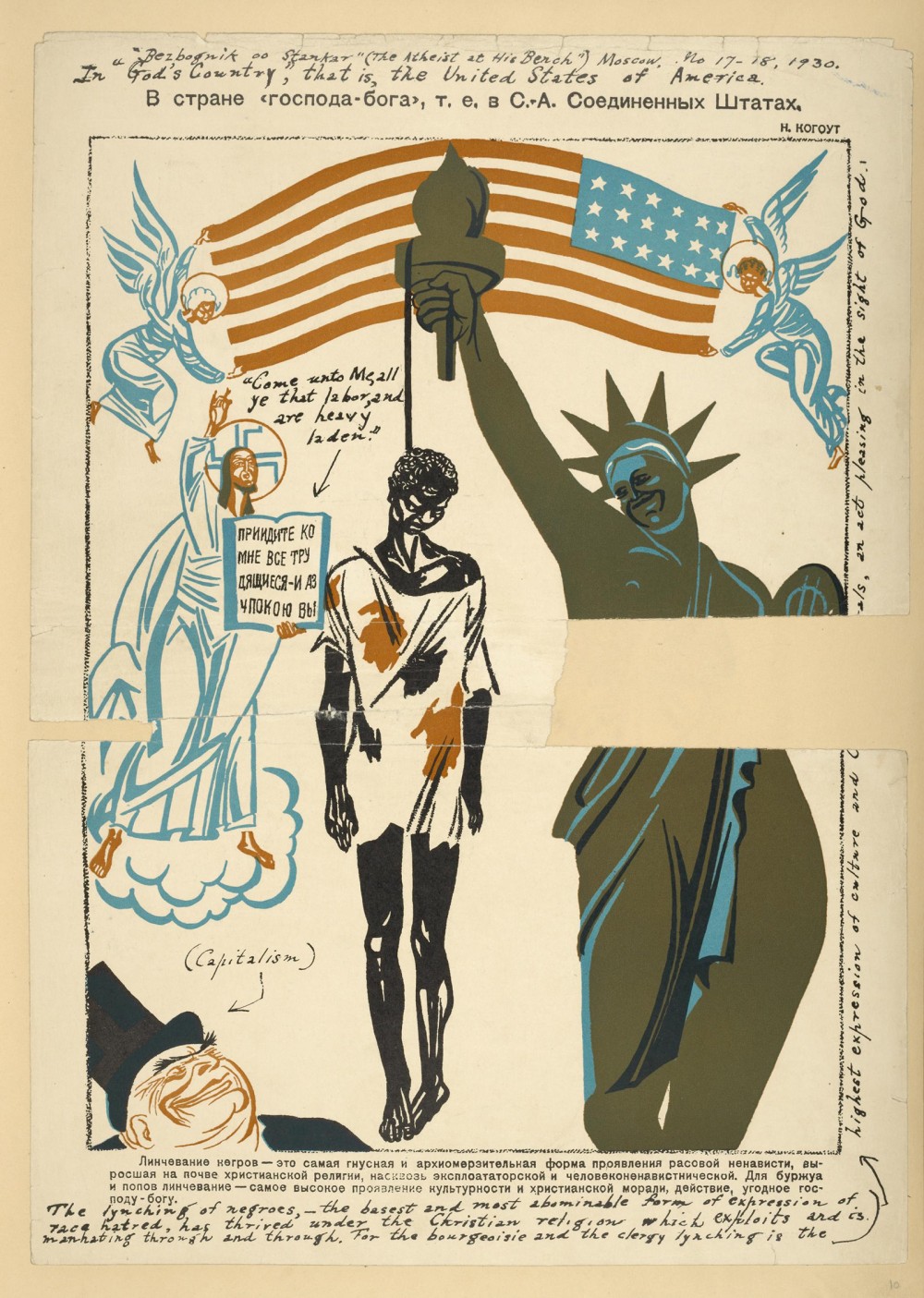 The Soviet Union took advantage of the very real racial tensions in the U.S. to create anti-American propaganda. This 1930 Soviet poster shows a black American being lynched from the Statue of Liberty, while the text below asserts the links between racism and Christianity. 1930 issue of Bezbozhnik. Wikimedia.