The United States entered the 1960s unaccustomed to stark foreign policy failures, having emerged from World War II as a global superpower before waging a Cold War against the Soviet Union in the 1950s. In the new decade, unsuccessful conflicts in Cuba and Vietnam would yield embarrassment, fear, and tragedy, stunning a nation used to triumph and altering the way many thought of America’s role in international affairs.

On January 8, 1959, Fidel Castro and his forces triumphantly entered Havana and initiated a new era in Cuban history. Castro and compatriots such as Che Guevara and Celia Sánchez had much to celebrate as they made their way through the city’s streets. After losing American support, Cuban President Fulgencio Batista had fled the nation the previous week, ending the long war Castro’s forces and countless other armed revolutionary factions had fought to oust the dictator. The United States initially expressed public sympathy with Castro’s government, which was immediately granted diplomatic recognition. Behind the scenes, however, President Dwight Eisenhower and members of his administration were wary of the new leader. The relationship between the two governments rapidly deteriorated following Castro’s April 1959 visit to Washington, which included a troubled meeting with Vice President Richard Nixon. On October 19, 1960, the United States instituted a trade embargo to economically isolate the Cuban regime, and in January 1961 the two nations broke off formal diplomatic relations.

As the new Cuban government instituted leftist policies that centered on agrarian reform, land redistribution, and the nationalization of private enterprises, Cuba’s wealthy and middle class citizens fled the island in droves and began to settle in Miami and other American cities. The Central Intelligence Agency, acting under the mistaken belief that the Castro government lacked popular support and that Cuban citizens would revolt if given the opportunity, began to recruit members of the exile community to participate in an invasion of the island. On April 16, 1961, an invasion force consisting primarily of Cuban émigrés landed on Girón Beach at the Bay of Pigs. Cuban soldiers and civilians quickly overwhelmed the exiles, many of whom were taken prisoner. The Cuban government’s success at thwarting the Bay of Pigs invasion did much to legitimize the new regime and was a tremendous embarrassment for the Kennedy administration.

As the political relationship between Cuba and the United States disintegrated, the Castro government became more closely aligned with the Soviet Union. This strengthening of ties set the stage for the Cuban Missile Crisis, perhaps the most dramatic foreign policy crisis in the history of the United States. In 1962, in response to the US’s long-time maintenance of a nuclear arsenal in Turkey and at the invitation of the Cuban government, the Soviet Union deployed nuclear missiles in Cuba. On October 14, 1962, American spy planes detected the construction of missile launch sites, and on October 22, President Kennedy addressed the American people to alert them to this threat. Over the course of the next several days, the world watched in horror as the United States and the Soviet Union hovered on the brink of nuclear war. Finally, on October 28, the Soviet Union agreed to remove its missiles from Cuba in exchange for a US agreement to remove its missiles from Turkey and a formal pledge that the United States would not invade Cuba, and the crisis was resolved peacefully. 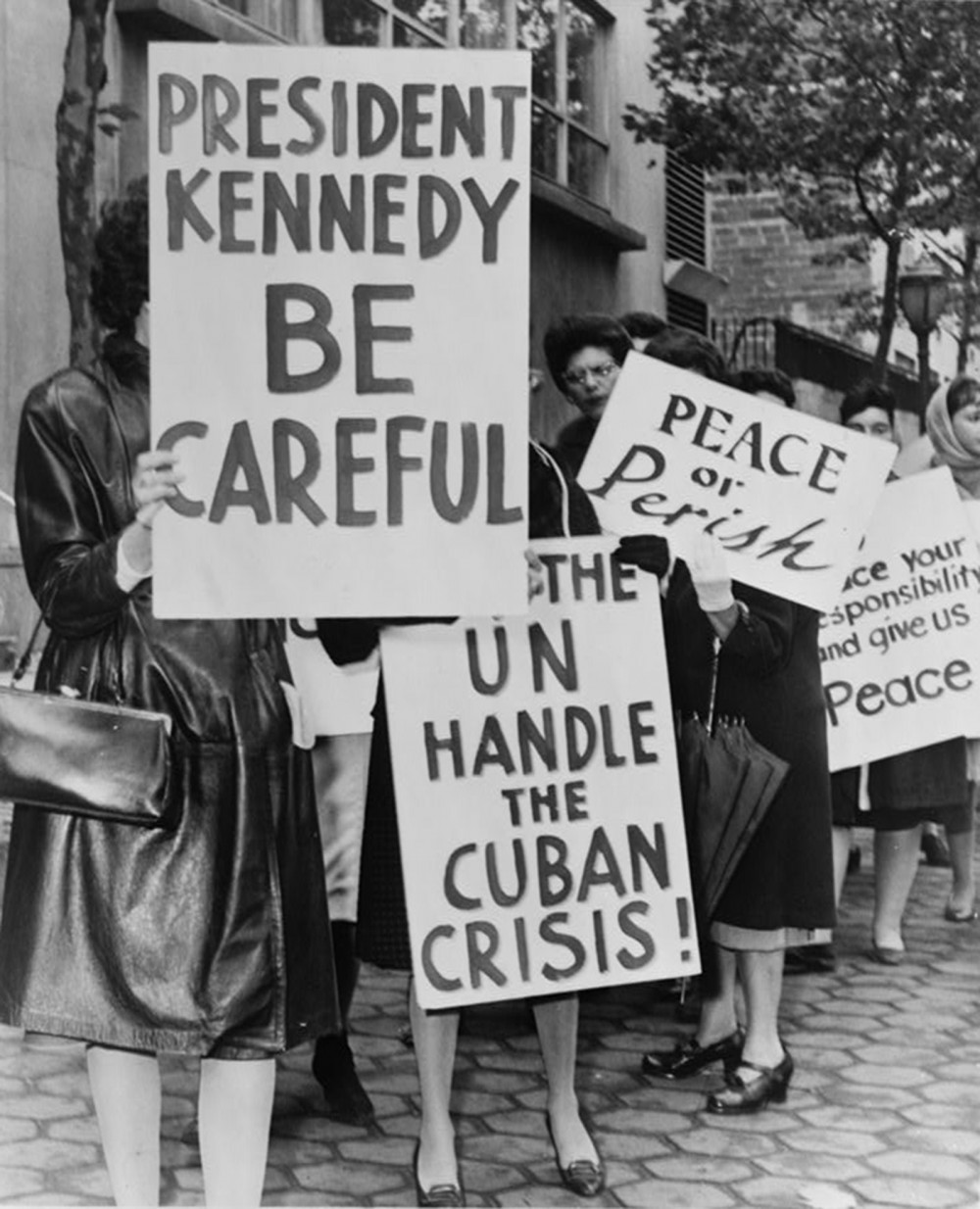 The Cuban Missile Crisis was a time of great fear throughout America. Women in this photograph urged President Kennedy to be cautious of instigating war. Phil Stanziola, “800 women strikers for peace on 47 St near the UN Bldg,” 1962. Library of Congress.

Though the Cuban Missile Crisis temporarily halted the flow of Cuban refugees into the United States, emigration reinitiated in earnest in the mid-1960s. In 1965, the Johnson administration and the Castro government brokered a deal that facilitated the reunion of families that had been separated by earlier waves of migration, opening the door for thousands to leave the island. In 1966 President Lyndon B. Johnson signed the Cuban Adjustment Act, a law granting automatic permanent residency to any Cuban who entered the United States. Over the course of the 1960s, hundreds of thousands of Cubans left their homeland and began to build new lives for themselves in America.

American involvement in the Vietnam War began during the age of decolonization. With the Soviet Union backing nationalist movements across the globe, the United States feared the expansion of communist influence and pledged to confront communist revolutions in the Truman Doctrine. Between 1946 and 1954, France fought a counterinsurgency campaign against the nationalist Vietminh forces led by Ho Chi Minh. America assisted the French war effort with funds, arms, and advisors. On the eve of the Geneva Peace Conference in 1954, Vietminh forces defeated the French army at Dien Bien Phu. The conference temporarily divided Vietnam into two separate states until United Nations-monitored elections occurred. Elections, however, never transpired as the US feared a Communist victory. Consequently the US established the Republic of Vietnam, or South Vietnam, with Ngo Dinh Diem serving as prime minister. America viewed Diem favorably; although he was a nationalist, Diem was anticommunist and had lived in the US. In 1955, the CIA supported Diem in his bid to defeat all opposing political elements in South Vietnam.

A series of events hampered America and South Vietnam’s early effort against communist forces. The Battle of Ap Bac in 1963 demonstrated a South Vietnam not fully prepared for the challenges of an insurgency. Despite a clear numerical advantage, as well as mechanized and airborne infantry, Army of the Republic of Vietnam (ARVN) forces were mauled by Vietcong (VC) units. Modeled after the US Army, ARVN was too technology-dependent to operate without US assistance. In the wake of Diem’s assassination and the merry-go-round of subsequent military dictators, the situation in South Vietnam further deteriorated. In 1964, the USS Maddox reported incoming fire from North Vietnamese ships. Although the validity of the Gulf of Tonkin incident remains questionable, the event resulted in the Gulf of Tonkin Resolution. This act of Congress provided Johnson with the power to defend Southeast Asia with any measures he deemed necessary. By 1965, the U.S. forces sought to engage the VC and NVA in battle. Under General William Westmoreland, head of Military Assistance Command, Vietnam (MACV), defeating the VC and NVA was the top priority. MACV commenced a war of attrition meant to exact a human toll Hanoi could not bear. The use of helicopters to transport soldiers into battle, kill ratios, and failure to retain hard-won ground came to epitomize the war.

Although American officials like Westmoreland and Secretary of Defense Robert McNamara claimed a communist defeat was on the horizon, by 1968 the realities in Vietnam proved otherwise. On January 30, during the Vietnamese lunar new year of Tet, VC and NVA forces launched a massive, nationwide assault against South Vietnam’s major population centers. The Communist offensive failed to topple the Saigon government and American and South Vietnamese troops decimated the VC ranks.

The 1968 Tet Offensive was indeed the turning point in the Vietnam War. As a major setback for the communist forces, American-sponsored nation-building efforts flourished across much of South Vietnam. Yet the fallout from Tet proved a public relations triumph for North Vietnam. As the first truly televised war, scenes of fighting, particularly those from Tet, fueled antiwar movements in the US. Images from Vietnam presented an out-of-control conflict where Americans were needlessly dying. The My Lai Massacre, which involved US solders killing unarmed South Vietnamese citizens in March of 1968, further soured public opinion of the war and contributed to the misconception that all American soldiers were murderers.

When the most trusted news anchor in America, Walter Cronkite, declared that the US could not win the war, the Johnson administration knew it had lost public support. With growing antiwar sentiment after years of endless war, Johnson excused himself from the upcoming 1968 presidential election.

After Richard Nixon was elected, his administration sought to disengage America from the war in Vietnam. American combat forces were withdrawn from South Vietnam in a process called Vietnamization. Dubbed “victory with honor,” this process amounted to the American abandonment of South Vietnam, and the US had entered into peace negotiations with the North Vietnamese. Peace talks, however, stalled as both sides refused to compromise. Hoping the absence of American ground forces would afford a quick victory for Hanoi, the NVA launched a massive assault on South Vietnam known as the 1972 Easter Offensive. Only resilient ARVN units and US airpower stymied the NVA offensive. Consequently, secret negotiations between Hanoi and Washington resulted in the 1973 Paris Peace Accords. Omitted from negotiations, the South Vietnamese felt betrayed as the accords permitted NVA units to occupy South Vietnamese territory; the accords also severely curtailed US monetary and military support for Saigon. Without such assistance, the Republic of Vietnam succumbed to communist rule after North Vietnam’s 1975 invasion of the country.

This rapid growth of Asian American communities after 1965 emerged from the exigencies of Vietnam and the broader Cold War. Aware that the nation’s discriminatory immigration laws favoring Western European immigrants were a liability in the Cold War, the US Congress passed the Hart-Cellar Immigration Act of 1965; the act supplanted immigration laws based on national quotas with a system that provided a pathway for skilled workers and the reunification of families.  This sparked the migration of scientists, engineers, and other researchers from East Asia who participated in the nation’s defense research industry.  Given the shortage of medical professionals in the nation’s urban and rural areas and America’s neo-colonial relationship with the Philippines, at least 25,000 Filipina nurses came to the US in the decades after the 1965 Immigration Act was passed.

The end of America’s wars in Southeast Asia triggered the dislocation of thousands of refugees from Vietnam, Laos, and Cambodia.  After an initial exodus of about 100,000 Vietnamese refugees who were characterized by their relative wealth, education, and connections with the US government, over 300,000 additional Vietnamese refugees fled the political and economic instability wrought by the institution of re-education camps and a border war with China.  This next wave of migration also included thousands of Cambodians fleeing the Khmer Rouge genocide and smaller numbers of Cham, Mien, and Lao refugees. Although the US sought to assimilate refugees as quickly as possible by dispersing them into America’s interior, Southeast Asian Americans migrated to be with their co-ethnics or to areas with existing Asian communities once they accrued enough capital. Since the 1970s, Asian migrants have been economically diverse, and recent immigration trends have considerably changed the landscape of Asian America.  From 2000 to 2010 the Asian American population grew by 46 percent, and there are now over 17.3 million Asian Americans in the US.