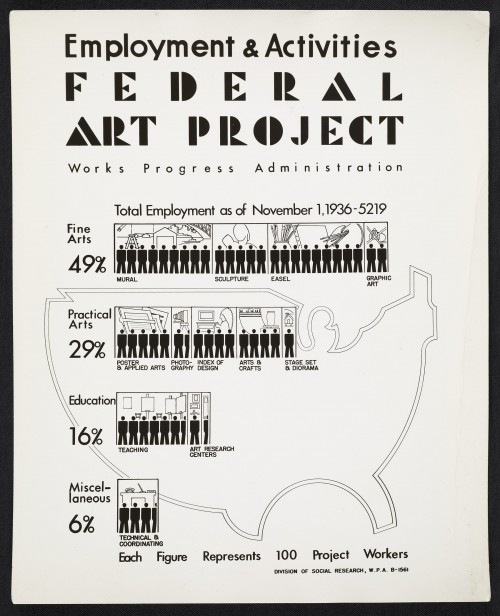 Posters like this showing the extent of the Federal Art Project were used to prove the worth of the WPA’s various endeavors and, by extension, the value of the New Deal to the American people. “Employment and Activities poster for the WPA’s Federal Art Project,” January 1, 1936. Wikimedia.

The early years of the Depression were catastrophic. The crisis, far from relenting, deepened each year. Unemployment peaked at 25% in 1932. With no end in sight, and with private firms crippled and charities overwhelmed by the crisis, Americans looked to their government as the last barrier against starvation, hopelessness, and perpetual poverty.

Few presidential elections in modern American history have been more consequential than that of 1932. The United States was struggling through the third year of the Depression and exasperated voters overthrew Hoover in a landslide to elect the Democratic governor of New York, Franklin Delano Roosevelt. Roosevelt came from a privileged background in New York’s Hudson River Valley (his distant cousin, Theodore Roosevelt, became president while Franklin was at Harvard). Franklin Roosevelt embarked upon a slow but steady ascent through state and national politics. In 1913, he was appointed Assistant Secretary of the Navy, a position he held during the defense emergency of World War I. In the course of his rise, in the summer of 1921, Roosevelt suffered a sudden bout of lower-body pain and paralysis. He was diagnosed with polio. The disease left him a paraplegic, but, encouraged and assisted by his wife, Eleanor, Roosevelt sought therapeutic treatment and maintained sufficient political connections to reenter politics. In 1928, Roosevelt won election as governor of New York. He oversaw the rise of the Depression and drew from progressivism to address the economic crisis. During his gubernatorial tenure, Roosevelt introduced the first comprehensive unemployment relief program and helped to pioneer efforts to expand public utilities. He also relied on like-minded advisors. For example, Frances Perkins, then commissioner of the state’s Labor Department, successfully advocated pioneering legislation which enhanced workplace safety and reduced the use of child labor in factories. Perkins later accompanied Roosevelt to Washington and serve as the nation’s first female Secretary of Labor.

On July 1, 1932, Roosevelt, the newly-designated presidential nominee of the Democratic Party, delivered the first and one of the most famous on-site acceptance speeches in American presidential history. Building to a conclusion, he promised, “I pledge you, I pledge myself, to a new deal for the American people.” Newspaper editors seized upon the phrase “new deal,” and it entered the American political lexicon as shorthand for Roosevelt’s program to address the Great Depression. There were, however, few hints in his political campaign that suggested the size and scope of the “New Deal.” Regardless, Roosevelt crushed Hoover. He won more counties than any previous candidate in American history. He spent the months between his election and inauguration traveling, planning, and assembling a team of advisors, the famous “Brain Trust” of academics and experts, to help him formulate a plan of attack. On March 4th, 1933, in his first Inaugural Address, Roosevelt famously declared, “This great Nation will endure as it has endured, will revive and will prosper. So, first of all, let me assert my firm belief that the only thing we have to fear is fear itself—nameless, unreasoning, unjustified terror which paralyzes needed efforts to convert retreat into advance.”

Roosevelt’s reassuring words would have rung hollow if he had not taken swift action against the economic crisis. In his first days in office, Roosevelt and his advisers prepared, submitted, and secured Congressional enactment of numerous laws designed to arrest the worst of the Great Depression. His administration threw the federal government headlong into the fight against the Depression.

Roosevelt immediately looked to stabilize the collapsing banking system. He declared a national “bank holiday” closing American banks and set to work pushing the Emergency Banking Act swiftly through Congress. On March 12th, the night before select banks reopened under stricter federal guidelines, Roosevelt appeared on the radio in the first of his “Fireside Chats.” The addresses, which the president continued delivering through four terms, were informal, even personal. Roosevelt used his airtime to explain New Deal legislation, to encourage confidence in government action, and to mobilize the American people’s support. In the first “chat,” Roosevelt described the new banking safeguards and asked the public to place their trust and their savings in banks. Americans responded and across the country, deposits outpaced withdrawals. The act was a major success. In June, Congress passed the Glass-Steagall Banking Act, which instituted federal deposit insurance and barred the mixing of commercial and investment banking.

Stabilizing the banks was only a first step. In the remainder of his “First Hundred Days,” Roosevelt and his congressional allies focused especially on relief for suffering Americans. Congress debated, amended, and passed what Roosevelt proposed. As one historian noted, the president “directed the entire operation like a seasoned field general.” And despite some questions over the constitutionality of many of his actions, Americans and their congressional representatives conceded that the crisis demanded swift and immediate action. The Civilian Conservation Corps (CCC) employed young men on conservation and reforestation projects; the Federal Emergency Relief Administration (FERA) provided direct cash assistance to state relief agencies struggling to care for the unemployed; the Tennessee Valley Authority (TVA) built a series of hydroelectric dams along the Tennessee River as part of a comprehensive program to economically develop a chronically depressed region; several agencies helped home and farm owners refinance their mortgages. And Roosevelt wasn’t done.

The heart of Roosevelt’s early recovery program consisted of two massive efforts to stabilize and coordinate the American economy: the Agricultural Adjustment Administration (AAA) and the National Recovery Administration (NRA). The AAA, created in May 1933, aimed to raise the prices of agricultural commodities (and hence farmers’ income) by offering cash incentives to voluntarily limit farm production (decreasing supply, thereby raising prices). The National Industrial Recovery Act, which created the National Recovery Administration (NRA) in June 1933, suspended antitrust laws to allow businesses to establish “codes” that would coordinate prices, regulate production levels, and establish conditions of employment to curtail “cutthroat competition.” In exchange for these exemptions, businesses agreed to provide reasonable wages and hours, end child labor, and allow workers the right to unionize. Participating businesses earned the right to display a placard with the NRA’s “Blue Eagle,” showing their cooperation in the effort to combat the Great Depression.

The programs of the First Hundred Days stabilized the American economy and ushered in a robust though imperfect recovery. GDP climbed once more, but even as output increased, unemployment remained stubbornly high. Though the unemployment rate dipped from its high in 1933, when Roosevelt was inaugurated, vast numbers remained out of work. If the economy could not put people back to work, the New Deal would try. The Civil Works Administration (CWA) and, later, the Works Progress Administration (WPA) put unemployed men and women to work on projects designed and proposed by local governments. The Public Works Administration (PWA) provided grants-in-aid to local governments for large infrastructure projects, such as bridges, tunnels, schoolhouses, libraries, and America’s first federal public housing projects. Together, they provided not only tangible projects of immense public good, but employment for millions. The New Deal was reshaping much of the nation.