In addition to alarms over immigration and the growing presence of Catholicism and Judaism, a new core of Christian fundamentalists were very much concerned about relaxed sexual mores and increased social freedoms, especially as found in city centers. Although never a centralized group, most fundamentalists lashed out against what they saw as a sagging public morality, a world in which Protestantism seemed challenged by Catholicism, women exercised ever greater sexual freedoms, public amusements encouraged selfish and empty pleasures, and critics mocked prohibition through bootlegging and speakeasies.

Christian Fundamentalism arose most directly from a doctrinal dispute among Protestant leaders. Liberal theologians sought to intertwine religion with science and secular culture. These “Modernists,” influenced by the Biblical scholarship of nineteenth century German academics, argued that Christian doctrines about the miraculous might be best understood metaphorically. The church, they said, needed to adapt itself to the world. According to the Baptist pastor Harry Emerson Fosdick, the “coming of Christ” might occur “slowly…but surely, [as] His will and principles [are] worked out by God’s grace in human life and institutions.” The social gospel, which encouraged Christians to build the Kingdom of God on earth by working against social and economic inequality, was very much tied to liberal theology.

During the 1910s, funding from oil barons Lyman and Milton Stewart enabled the evangelist A. C. Dixon to commission some ninety essays to combat religious liberalism. The collection, known as The Fundamentals, became the foundational documents of Christian fundamentalism, from which the movement’s name is drawn. Contributors agreed that Christian faith rested upon literal truths, that Jesus, for instance, would physically return to earth at the end of time to redeem the righteous and damn the wicked. Some of the essays put forth that human endeavor would not build the Kingdom of God, while others covered such subjects as the virgin birth and biblical inerrancy. American Fundamentalists spanned Protestant denominations and borrowed from diverse philosophies and theologies, most notably the holiness movement, the larger revivalism of the nineteenth century and new dispensationalist theology (in which history proceeded, and would end, through “dispensations” by God). They did, however, all agree that modernism was the enemy and the Bible was the inerrant word of God. It was a fluid movement often without clear boundaries, but it featured many prominent clergymen, including the well-established and extremely vocal John Roach Straton (New York), J. Frank Norris (Texas), and William Bell Riley (Minnesota).

On March 21, 1925 in a tiny courtroom in Dayton, Tennessee, Fundamentalists gathered to tackle the issues of creation and evolution. A young biology teacher, John T. Scopes, was being tried for teaching his students evolutionary theory in violation of the Butler Act, a state law preventing evolutionary theory or any theory that denied “the Divine Creation of man as taught in the Bible” from being taught in publically-funded Tennessee classrooms. Seeing the act as a threat to personal liberty, the American Civil Liberties Union (ACLU) immediately sought a volunteer for a “test” case, hoping that the conviction and subsequent appeals would lead to a day in the Supreme Court, testing the constitutionality of the law. It was then that Scopes, a part-time teacher and coach, stepped up and voluntarily admitted to teaching evolution (Scopes’ violation of the law was never in question). Thus the stage was set for the pivotal courtroom showdown—“the trial of the century”—between the champions and opponents of evolution that marked a key moment in an enduring American “culture war.”

The case became a public spectacle. Clarence Darrow, an agnostic attorney and a keen liberal mind from Chicago, volunteered to aid the defense came up against William Jennings Bryan. Bryan, the “Great Commoner,” was the three-time presidential candidate who in his younger days had led the political crusade against corporate greed. He had done so then with a firm belief in the righteousness of his cause, and now he defended biblical literalism in similar terms. The theory of evolution, Bryan said, with its emphasis on the survival of the fittest, “would eliminate love and carry man back to a struggle of tooth and claw.” 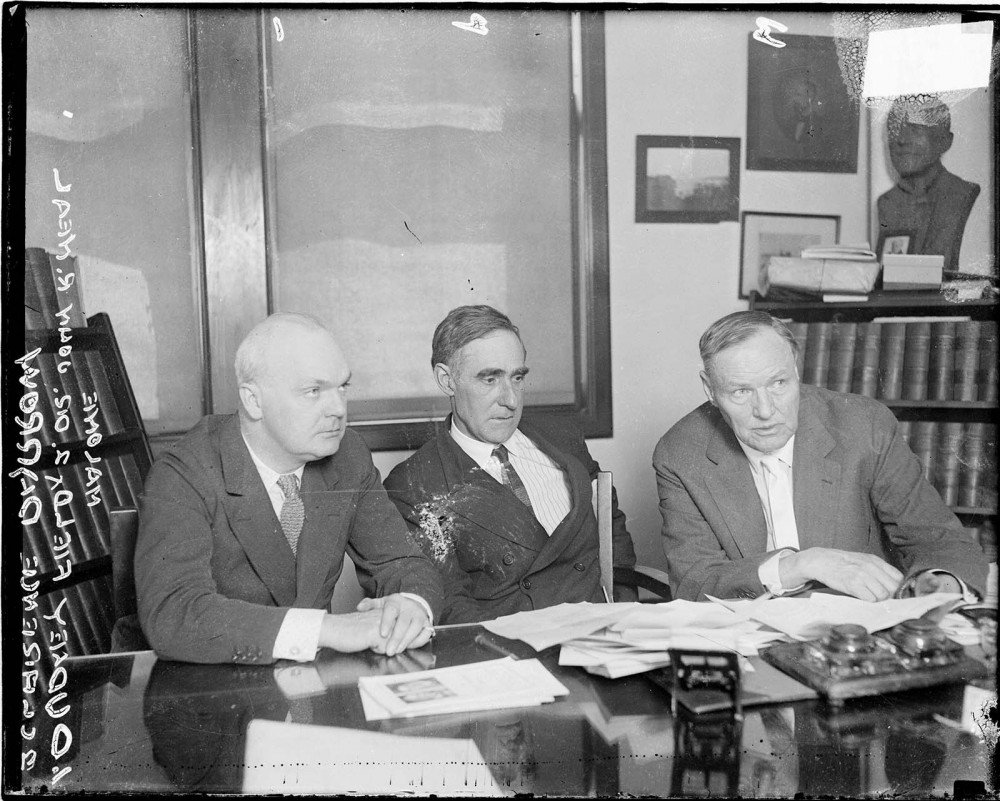 The Scopes trial signified a pivotal moment when science and religion became diametrically opposed. The Scopes defense team, three of whom are seen in this photograph, argued a literal interpretation of the Bible that is still popular in many fundamentalist Christian circles today. “Dudley Field Malone, Dr. John R. Neal, and Clarence Darrow in Chicago, Illinois.” The Clarence Darrow Digital Collection.

Newspapermen and spectators flooded the small town of Dayton. Across the nation, Americans tuned their radios to the national broadcasts of a trial that dealt with questions of religious liberty, academic freedom, parental rights, and the moral responsibility of education. For six days in July, the men and women of America were captivated as Bryan presented his argument on the morally corrupting influence of evolutionary theory (and pointed out that Darrow made a similar argument about the corruptive potential of education during his defense of the famed killers Nathan Leopold and Richard Loeb a year before). Darrow eloquently fought for academic freedom.

At the request of the defense, Bryan took the stand as an “expert witness” on the Bible. At his age, he was no match for Darrow’s famous skills as a trial lawyer and his answers came across as blundering and incoherent, particularly as he was not in fact a literal believer in all of the Genesis account (believing—as many anti-evolutionists did—that the meaning of the word “day” in the book of Genesis could be taken as allegory) and only hesitantly admitted as much, not wishing to alienate his fundamentalist followers. Additionally, Darrow posed a series of unanswerable questions: Was the “great fish” that swallowed the prophet Jonah created for that specific purpose? What precisely happened astronomically when God made the sun stand still? Bryan, of course, could cite only his faith in miracles. Tied into logical contradictions, Bryan’s testimony was a public relations disaster, although his statements were expunged from the record the next day and no further experts were allowed—Scopes’ guilt being established, the jury delivered a guilty verdict in minutes. The case was later thrown out on technicality. But few cared about the verdict. Darrow had, in many ways, at least to his defenders, already won: the fundamentalists seemed to have taken a beating in the national limelight. Journalist and satirist H. L. Mencken characterized the “circus in Tennessee” as an embarrassment for fundamentalism, and modernists remembered the “Monkey Trial” as a smashing victory. If fundamentalists retreated from the public sphere, they did not disappear entirely. Instead, they went local, built a vibrant subculture, and emerged many decades later stronger than ever.