Republican dominance over national policy and subsidization of business development during the Civil War and Reconstruction accelerated American industrialization. It was the railroads that signaled the new American order.

The railroads created the first great concentrations of capital, spawned the first massive corporations, made the first of the vast fortunes that would define the “Gilded Age,” unleashed labor demands that united thousands of farmers and immigrants, and linked many towns and cities. National railroad mileage tripled in the twenty years after the outbreak of the Civil War, and tripled again over the four decades that followed. Railroads impelled the creation of uniform time zones across the country, gave industrialists access to remote markets, and opened the American west. Railroad companies were the nation’s largest businesses. Their vast national operations demanded the creation of innovative new corporate organization, advanced management techniques, and vast sums of capital. Their huge expenditures spurred countless industries and attracted droves of laborers. And as they crisscrossed the nation, they created a national market, a truly national economy, and, seemingly, a new national culture.

The railroads were not natural creations. Their vast capital requirements required the use of incorporation, a legal innovation that protected shareholders from losses. Enormous amounts of government support followed. Federal, state, and local governments offered unrivaled handouts to create the national rail networks. Lincoln’s Republican Party passed legislation granting vast subsidies. Hundreds of millions of acres of land and millions of dollars’ worth of government bonds were freely given to build the great transcontinental railroads and the innumerable trunk lines that quickly annihilated the vast geographic barriers that had sheltered American cities from one another. 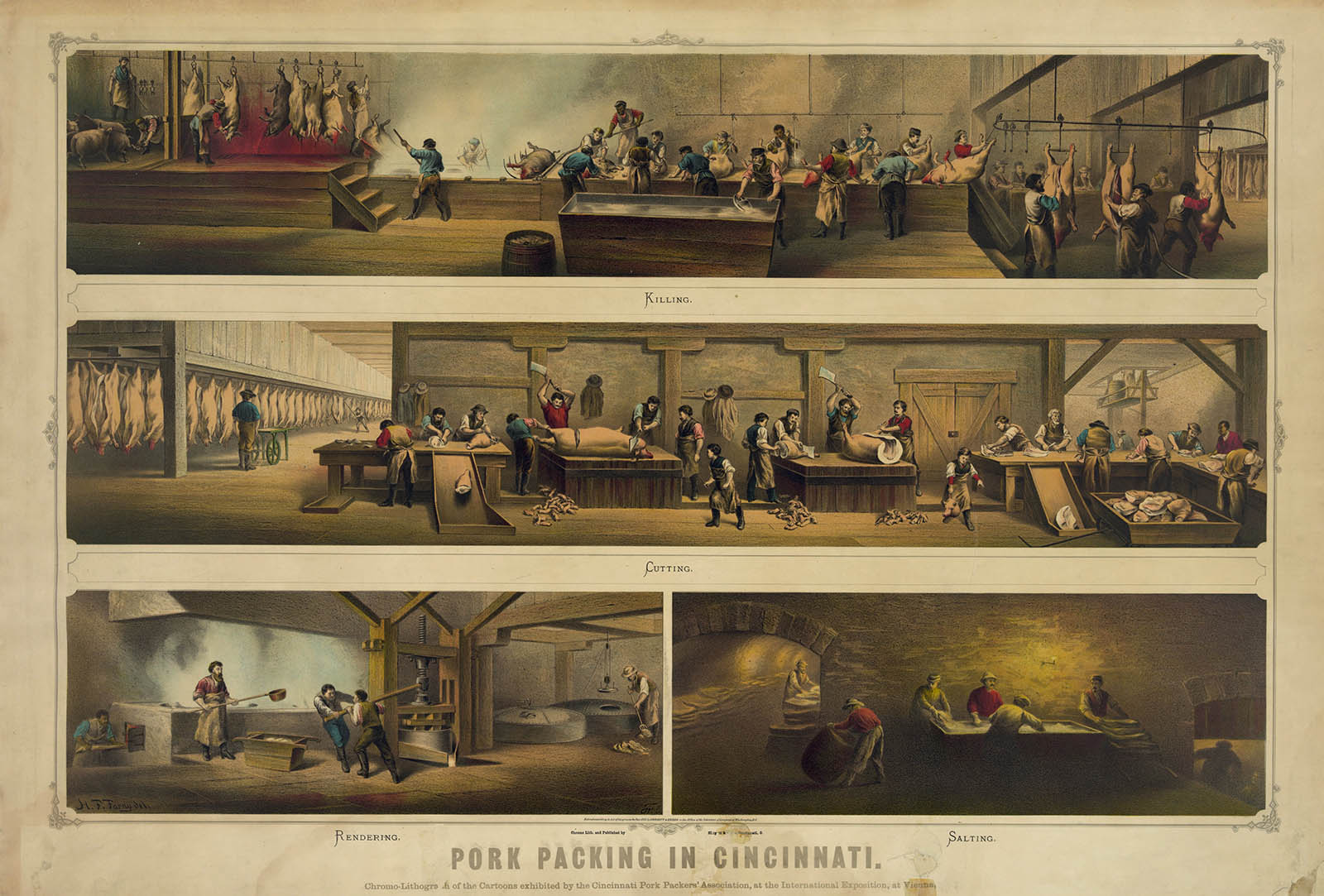 This print shows the four stages of pork packing in nineteenth-century Cincinnati. This centralization of production made meat-packing an innovative industry, one of great interest to industrialists of all ilks. In fact, this chromo-lithograph was exhibited by the Cincinnati Pork Packers’ Association at the International Exposition in Vienna, Austria. “Pork Packing in Cincinnati,” 1873. Wikimedia.

As railroad construction drove growth, new means of production spawned new systems of labor. Many wage earners had traditionally seen factory work as a temporary stepping-stone to their own small businesses or farms. After the war, however, new technology and greater mechanization meant fewer and fewer workers could legitimately aspire to economic independence and stronger and more organized labor unions formed to defend the rights of a growing permanent working class. At the same time, the growing scale of business operations meant owners became increasingly disconnected from employees and day-to-day operations. To handle vast new operations, they hired managers. Educated employees swelled the ranks of an emerging commercial middle class.

Industrialization remade much of American life. Rapidly growing industrialized cities knit together urban consumers and rural producers into a single, integrated national market. Food production and consumption, for instance, was utterly nationalized. Chicago’s Stock Yards seemingly tied it all together. Between 1866 and 1886 ranchers drove a million head of cattle annually overland from Texas ranches to railroad depots in Kansas for shipment by rail to Chicago. After travelling through modern “disassembly lines,” the animals left the adjoining slaughterhouses as slabs of meat to be packed into refrigerated rail cars and sent out to butcher shops across North America. By 1885 a handful of large-scale industrial meatpackers in Chicago produced nearly 500 million pounds of “dressed” beef annually. This scale of industrialized meat production fueled massive environmental transformations across the Midwest and Great Plains. Landscapes of buffalo herds, grasslands, and old-growth forests became landscapes of cattle, corn, and wheat as new settlers produced goods for the ever-expanding market. Chicago became the Gateway City, a crossroads connecting American agricultural goods, capital markets in New York and Europe, and consumers from all corners of the United States.

Technological innovation accompanied economic development. In 1878 the New York Daily Graphic ran an April Fool’s Day article, a fictitious interview with the celebrated inventor Thomas A. Edison. The accompanying article described the “biggest invention of the age”—a new Edison machine that could create forty different kinds of food and drink out of just air, water, and dirt. Edison promised that “meat will no longer be killed and vegetables no longer grown, except by savages.” The machine, he said, would end “famine and pauperism.” And all for $5 or $6 per machine! The story was a joke, but Edison still received inquiries about the food machine from readers wondering when it would be ready for the mass market. Americans of the era had already witnessed startling technological advances that would have seemed fictitious mere years earlier. In the midst of onrushing technological advances, the food machine seemed entirely plausible. 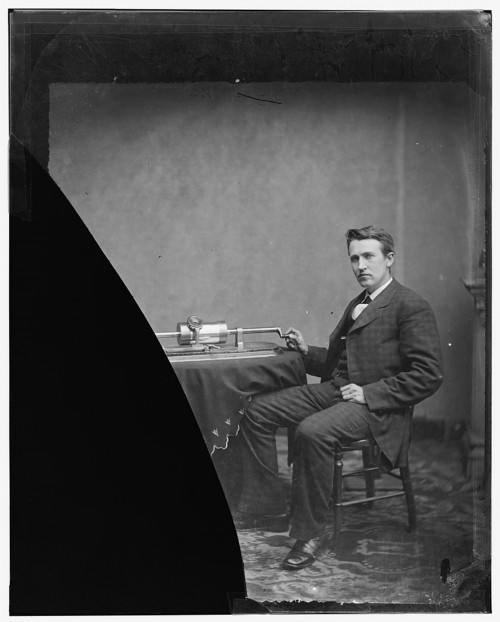 This photograph, taken in Mathew Brady’s Washington, DC, studio in April 1878, shows inventor Thomas Edison with his phonograph (2nd model). Edison was one of the most important and influential American inventors, giving us technology like the phonograph and motion picture camera. Thomas Handy, “Edison, Thomas,” 1877. Library of Congress.

In September 1878, Edison announced a new and ambitious line of research and development—electric power and lighting. Thanks to the pioneering experiments of British physicist Michael Faraday, electricians had been familiar with the principles of the electric dynamo and motor since the 1830s. In the most basic terms, a dynamo is a device that converts mechanical work to electrical power by rotating copper conductors at high speed inside a magnetic field. A motor does the opposite—it converts electrical power into useful mechanical work. Between Faraday’s research and Edison’s announcement, many electricians had introduced various designs for dynamos and rudimentary forms of electric lighting.

Two general characteristics set Edison apart from other inventors and engineers working on electric generation and lighting. Unlike the commonly held image of the genius lone inventor gripped by inspiration (Samuel F.B. Morse or Alexander Graham Bell, for example), Edison believed that tough problems could be best tackled through collaboration. Edison was the forerunner of the research-and-development managers who guided innovation for most of the twentieth century. And just as importantly, Edison was as much entrepreneur as inventor. He regarded his inventions as successes only to the extent that they engendered successful businesses. He regarded his Menlo Park laboratory as an “invention factory,” famously declaring that it would turn out “a minor invention every ten days and a big thing every six months or so.” The facility boasted a fully equipped machine shop and a laboratory stocked with every conceivable electrical device and chemical substance, and employed many skilled machinists and experimenters. Edison’s work on electric light and power over the next several years exemplified these two characteristics. He brought the full power of his Menlo Park laboratory and staff to bear on the many problems associated with building an electric power system and commercializing it. Edison set to work on electric power and light almost immediately, and put aside other lines of research to devote himself fully to the massive undertaking. 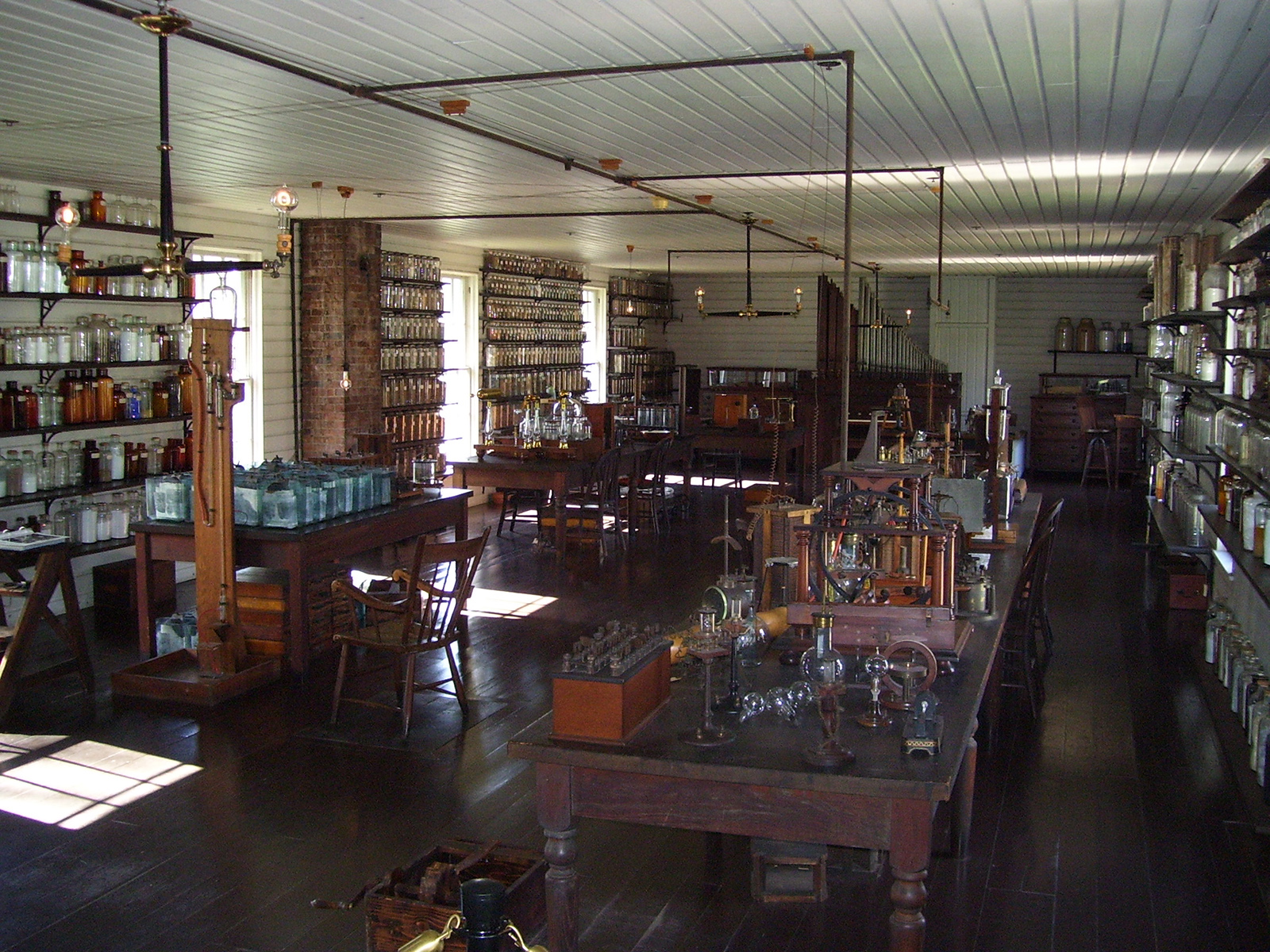 Along with a host of inventions central to American life, Edison also came up with the principles of mass production and the first industrial research laboratory. A recreation of his Menlo Park Laboratory, the site of the invention of the light bulb, exists in Greenfield Village at The Henry Ford in Dearborn, Michigan, shown in the photograph on the right. His work was vital in the development of the modern industrialized world, including the development of a system of electric-power production and distribution to households, businesses, and factories. Menlo Park Laboratory Photograph, 2010. Wikimedia.

By late fall 1879, Edison was satisfied that he had a system of electrical power and light ready for public exhibition. At the end of December and beginning of January, he festooned his Menlo Park laboratory with several hundred incandescent lamps and invited reporters, potential investors, and the merely curious to see his system in operation. For the remainder of 1880 and into 1881, Edison continued to refine his dynamo design and to scale up lamp production. From the business perspective, he conceived of two markets for his electrical power system, “isolated” installations for factories and mills and central stations that transmitted power to homes and businesses in cities. Since these isolated plants were of varying sizes, he and his staff developed several dynamo models capable of powering installations as small as 15 lamps or as large as 250. By the middle of 1883, he had constructed about 330 isolated plants powering over 60,000 lamps in factories, offices, printing houses, hotels, and theaters around the world

As successful as these isolated plants were, Edison’s main goal was to build central stations that sent power to large geographic areas. To achieve this goal, he harnessed the power of publicity. In order to get permission to lay cables under the streets of Manhattan, he invited the New York city council to his Menlo Park laboratory in late December 1880. There they witnessed an impressive display of the Edison electric lighting system and were treated to a lavish banquet catered by the famous New York restaurant Delmonico’s. At around the same time, he decided to set up a demonstration of his central station concept at an international electrical exhibition held at Paris in late 1881. This display showcased his largest dynamo yet built, capable of powering over 1,000 lamps and nicknamed the “Jumbo.”

By the end of 1881, Edison saw his goal in sight. He had begun construction of his first commercial central station in the heart of New York’s financial district, and had set crews to work laying electrical cable. He officially opened the Pearl Street central station on September 4, 1882. The installation sent power to about 1,000 buildings in an area covering about a square mile of downtown Manhattan. Finally, after four years spent perfecting his system of electric power and light, a relieved Edison exclaimed to a reporter, “I have accomplished all I promised.”