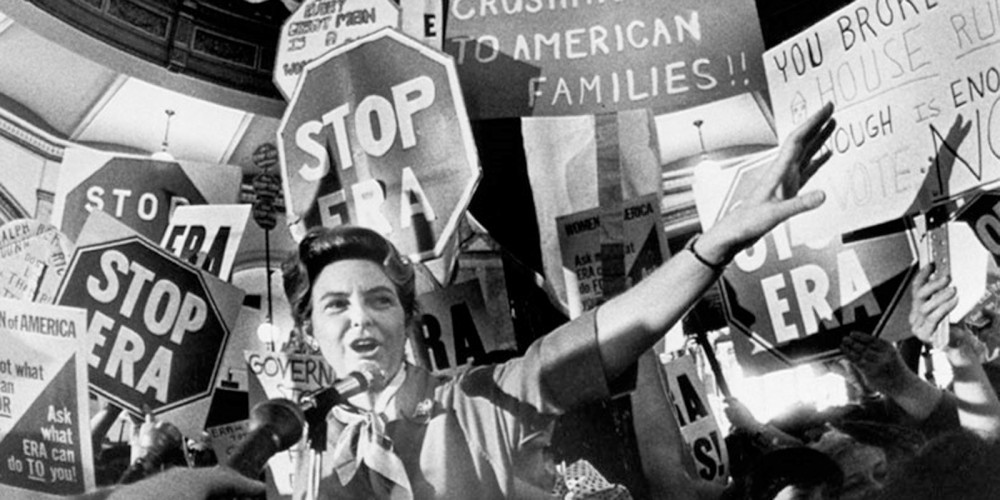 Speaking to Detroit autoworkers in October of 1980, Republican presidential candidate Ronald Reagan described what he saw as the American Dream under Democratic President Jimmy Carter. The family garage may have still held two cars, cracked Reagan, but they were “both Japanese and they’re out of gas.” The charismatic former governor of California suggested that a once-proud nation was running on empty, but he held out hope for redemption. Stressing the theme of “national decline,” Reagan nevertheless promised to make the United States once again a “shining city upon a hill.” His vision of a dark present and a bright future triumphed.

Reagan stood at the head of a powerful political movement often referred to as the New Right, in contrast to their more moderate conservative predecessors. During the 1970s and 1980s the New Right evolved into the most influential wing of the Republican Party and contributed to its stunning electoral success. During the last quarter of the twentieth century, after decades of liberal dominance, conservative leaders and grassroots activists wrenched the country fully onto a new rightward course. The conservative ascendency built upon the steady unraveling of the New Deal political order during the previous decade and drew in new “Reagan Democrats,” blue-collar voters who lost faith in the old liberal creed, and the emergent religious right, a coalition of conservative religious activists. All the while, enduring conflicts over race, economic policy, gender and sexual politics, and foreign affairs fatally fractured the liberal consensus that had dominated American politics since the presidency of Franklin Roosevelt.

The rise of the right affected Americans’ everyday lives in numerous ways. The Reagan administration embraced “free market” economic theory, dispensing with the principles of income redistribution and social welfare that had animated the New Deal and Great Society. Conservative policymakers tilted the regulatory and legal landscape of the United States toward corporations and wealthy individuals while weakening the “rights” framework that had undergirded advancements by African Americans, Mexican Americans, women, lesbians and gays, and other marginalized groups.

In many ways, however, the rise of the Right promised more than it delivered. Battered but intact, the programs of the New Deal and Great Society survived the 1980s. Despite Republican vows of fiscal discipline, both the federal government and the national debt ballooned. Conservative Christians viewed popular culture as more vulgar and hostile to their values than ever before. In the near term, the New Right registered only partial victories on a range of public policies and cultural issues. Yet, from a long-term perspective conservatives achieved a subtler and more enduring transformation of American politics. In the words of one historian, the conservative movement successfully “changed the terms of debate and placed its opponents on the defensive.” Liberals and their programs and their policies did not disappear, but they increasingly fought battles on terrain chosen by the New Right.