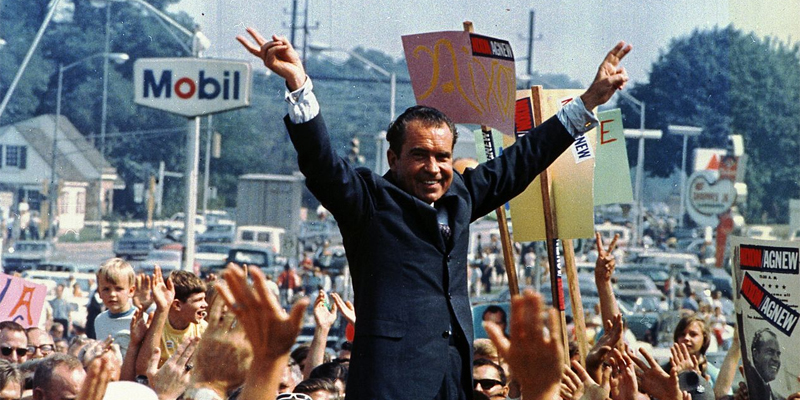 Richard Nixon campaigns in Philadelphia during the 1968 presidential election. National Archives via Wikimedia.

Once installed in the White House, Richard Nixon focused his energies on shaping American foreign policy. He publicly announced the “Nixon Doctrine” in 1969. While asserting the supremacy of American democratic capitalism, and conceding that the U. S. would continue supporting its allies financially, he denounced previous administrations’ willingness to commit American forces to third world conflicts and warned other states to assume responsibility for their own defense. He was turning America away from the policy of active, anti-communist containment, and toward a new strategy of “détente.”

Promoted by national security advisor and eventual Secretary of State Henry Kissinger, détente sought to stabilize the international system by “thawing” relations with Cold War rivals and bilaterally freezing arms levels. Taking advantage of tensions between the People’s Republic of China (PRC) and the Soviet Union, Nixon pursued closer relations in order to de-escalate tensions and strengthen the United States’ position relative to both countries. The strategy seemed to work. Nixon became the first American president to visit communist China and the first to visit the Soviet Union in 1971 and 1972, respectively. Direct diplomacy and cultural exchange programs with both countries grew and culminated with the formal normalization of U. S.-Chinese relations and the signing of two U. S.-Soviet arms agreements: the anti-ballistic missile (ABM) treaty and the Strategic Arms Limit Treaty (SALT I). By 1973, after almost thirty years of Cold War tension, peaceful coexistence suddenly seemed possible. Short-term gains, however, failed to translate into long-term stability. By the decade’s end, a fragile calm gave way once again to Cold War instability.

A brewing energy crisis interrupted Nixon’s presidency. In November 1973, Nixon appeared on television to inform Americans that energy had become “a serious national problem” and that the United States was “heading toward the most acute shortages of energy since World War II.” The previous month Arab members of the Organization of Petroleum Exporting Countries (OPEC), a cartel of the world’s leading oil producers, embargoed oil exports to the United States in retaliation for American intervention in the Middle East. The embargo caused an “oil shock” and launched the first energy crisis. By the end of 1973, the global price of oil had quadrupled. Drivers waited in line for hours to fill up their cars. Individual gas stations ran out of gas. American motorists worried that oil could run out at any moment. A Pennsylvania man died when his emergency stash of gasoline ignited in his trunk. OPEC rescinded its embargo in 1974, but the economic damage had been done and the energy crisis nevertheless extended into the late 1970s.

Like the Vietnam War, the oil crisis showed that small countries perceived could still hurt the United States. At a time of anxiety about the nation’s future, Vietnam and the energy crisis accelerated Americans’ disenchantments with the United States’ role in the world and the efficacy and quality of its leaders. Furthermore, scandals in the 1970s and early 80s sapped trust in America’s public institutions. Watergate catalyzed the disenchantment of the Unraveling.

On June 17, 1972, five men were arrested inside the offices of the Democratic National Committee (DNC) in the Watergate Complex in downtown Washington, D.C. After being tipped by a security guard, police found the men attempting to install sophisticated bugging equipment. One of those arrested was a former CIA employee then working as a security aide for the Nixon administration’s Committee to Reelect the President (lampooned as “CREEP”).

While there is no direct evidence that Richard Nixon ordered the Watergate break-in, Nixon had been recorded in conversation with his Chief of Staff requesting the DNC chairman be illegally wiretapped to obtain the names of the committee’s financial supporters, which could then be given to the Justice Department and the IRS to conduct spurious investigations into their personal affairs. (Nixon was also recorded ordering his Chief of Staff to break into the offices of the Brookings Institute and take files relating to the war in Vietnam, saying, “Goddamnit, get in and get those files. Blow the safe and get it.”) Whether or not the president ordered the Watergate break-in, the White House launched a massive cover-up. Administration officials ordered the CIA to halt the FBI investigation and paid hush-money to the burglars and White House aides. Nixon distanced himself from the incident publicly and went on to win a landslide election victory in November 1972. But, thanks largely to two persistent journalists at the Washington Post, Bob Woodward and Carl Bernstein, information continued to surface that tied the burglaries ever closer to the CIA, the FBI, and the White House. The Senate held televised hearings. Nixon fired his Chief of Staff and appointed a special prosecutor to investigate the burglary and ongoing investigation, and then, when the investigation progressed, ordered the Attorney General to fire that same prosecutor. Citing “executive privilege,” Nixon refused to comply with orders to produce tapes from the White House’s secret recording system. In July 1974, the House Judiciary Committee approved a bill to impeach the president. Nixon resigned before the full House could vote on impeachment. He became the first and only American president to resign his office.

Vice President Gerald Ford was sworn in as his successor and a month later granted Nixon a full presidential pardon. Nixon disappeared from public life without ever publicly apologizing, accepting responsibility, or facing charges stemming from the scandal.