Political and Ideology in the Affluent Society

Postwar economic prosperity and the creation of new suburban spaces inevitably shaped Americans’ politics. In stark contrast to the Great Depression, the new prosperity renewed belief in the superiority of capitalism, cultural conservatism, and religion.

In the 1930s, the economic ravages of the international economic catastrophe knocked the legs out from under the intellectual justifications for keeping government out of the economy. And yet, despite the inhospitable intellectual and cultural climate, there were pockets of true believers who kept the gospel of the free market alive. The single most important was the National Association of Manufacturers (NAM). In the midst of the depression, NAM, under the leadership of a group known as the “Brass Hats” reinvented itself and went on the offensive, initiating advertising campaigns supporting “free enterprise” and “The American Way of Life.” More importantly, NAM became a node for business leaders, such as J. Howard Pew of Sun Oil and Jasper Crane of DuPont Chemical Co., to network with like-minded individuals and take the message of free enterprise to the American people. The network of business leaders that NAM brought together in the midst of the Great Depression formed the financial, organizational and ideological underpinnings of the free market advocacy groups that emerged and found ready adherents in America’s new suburban spaces in the post-war decades.

One of the most important advocacy groups that sprang up after the war was Leonard Read’s Foundation for Economic Education. Read founded FEE in 1946 on the premise that “The American Way of Life” was essentially individualistic and that the best way to protect and promote that individualism was through libertarian economics. FEE, whose advisory board and supporters came mostly from the NAM network of Pew and Crane, became a key ideological factory, supplying businesses, service clubs, churches, schools and universities with a steady stream of libertarian literature, much of it authored by Austrian economist Ludwig Von Mises.

Shortly after FEE’s formation, Austrian economist and libertarian intellectual Friedrich Hayek founded the Mont Pelerin Society (MPS) in 1947. Unlike FEE, whose focus was more ideological in nature, the MPS’s focus on the intellectual work of promoting and improving capitalism brought together intellectuals from both sides of the Atlantic in common cause. Like FEE, many of the lay supporters of the MPS, such as Pew and Jasper Crane, also came from the NAM network. The MPS successfully challenged liberal, Keynesian economics on its home turf, academia, particularly when the brilliant University of Chicago economist Milton Friedman became its president. Friedman’s willingness to advocate for and apply his libertarian economics in the political realm made him, and the MPS, one of the most influential free market advocates in the world. Together with the Chicago School of Economics, the MPS carved out a critical space in academia that legitimized the libertarian ideology so successfully evangelized by FEE, its descendant organizations, and libertarian populizers such as Ayn Rand.

Libertarian politics and evangelical religion were shaping the origins of a conservative, suburban constituency. Suburban communities’ distance from government and other top-down community-building mechanisms left a social void that evangelical churches eagerly filled. More often than not the theology and ideology of these churches reinforced socially conservative views while simultaneously reinforcing congregants’ belief in economic individualism. These new communities and the suburban ethos of individualism that accompanied them became the building blocks for a new political movement. And yet, while the growing suburbs, and the conservative ideology that found a ready home there, eventually proved immensely important in American political life, their impact was not immediately felt. They did not yet have a champion.

In the post-World War II years the Republican Party faced a fork in the road. Its complete lack of electoral success since the Depression led to a battle within the party about how to revive its electoral prospects. The more conservative faction, represented by Ohio Senator Robert Taft (son of former President William Howard Taft) and backed by many party activists and financers such as J. Howard Pew, sought to take the party further to the right, particularly in economic matters, by rolling back New Deal programs and policies. On the other hand, the more moderate wing of the party led by men such as New York Governor Thomas Dewey and Nelson Rockefeller sought to embrace and reform New Deal programs and policies. There were further disagreements among party members about how involved the United States should be in the world. Issues such as foreign aid, collective security, and how best to fight Communism divided the party. 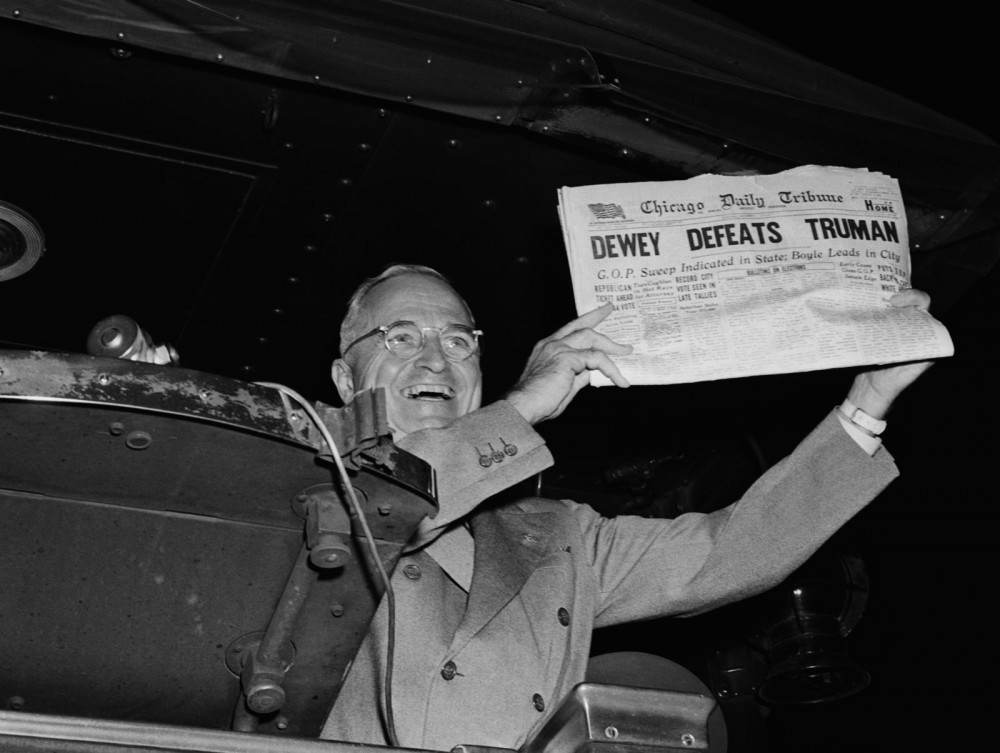 Just like the Internet, don’t always trust what you read in newspapers. This obviously incorrect banner from the front page of the Chicago Tribune on November 3, 1948 made its own headlines as the newspaper’s most embarrassing gaff. Britannica.

Initially, the moderates, or “liberals,” won control of the party with the nomination of Thomas Dewey in 1948. Dewey’s shocking loss to Truman, however, emboldened conservatives, who rallied around Taft as the 1952 presidential primaries approached. With the conservative banner riding high in the party, General Dwight Eisenhower, most recently NATO supreme commander, felt obliged to join the race in order to beat back the conservatives and “prevent one of our great two Parties from adopting a course which could lead to national suicide.” In addition to his fear that Taft and the conservatives would undermine collective security arrangements such as NATO, he also berated the “neanderthals” in his party for their anti-New Deal stance. Eisenhower felt that the best way to stop Communism was to undercut its appeal by alleviating the conditions under which it was most attractive. That meant supporting New Deal programs. There was also a political calculus to Eisenhower’s position. He observed, “Should any political party attempt to abolish social security, unemployment insurance, and eliminate labor laws and farm programs, you would not hear of that party again in our political history.”

The primary contest between Taft and Eisenhower was close and controversial, with Taft supporters claiming that Eisenhower stole the nomination from Taft at the convention. Eisenhower, attempting to placate the conservatives in his party picked California Congressman and virulent anti-Communist Richard Nixon as his running mate. With the Republican nomination sewn up, the immensely popular Eisenhower swept to victory in the 1952 general election, easily besting Truman’s hand-picked successor, Adlai Stevenson. Eisenhower’s popularity boosted Republicans across the country, leading them to majorities in both houses of Congress.

The Republican sweep in the 1952 election proved less momentous than its supporters hoped. Eisenhower’s popularity helped elect a congress that was more conservative then he had hoped. Within two years of his election, Eisenhower saw his legislative proposals routinely defeated by an unlikely alliance of conservative Republicans, who thought Eisenhower was going too far, and liberal Democrats, who thought he was not going far enough. For example, in 1954 Eisenhower proposed a national Health Care plan that would have provided Federal support for increasing health care coverage across the nation without getting the government directly involved in regulating the health care industry. The proposal was defeated in the house by a 238-134 vote with a swing bloc of 75 conservative Republicans joining liberal Democrats voting against the plan. Eisenhower’s proposals in education and agriculture often suffered similar defeats. By the end of his presidency, Ike’s domestic legislative achievements were largely limited to expanding social security, making Housing, Education and Welfare (HEW) a cabinet position, passing the National Defense Education Act, and bolstering federal support to education, particularly in math and science.

Like any president, Eisenhower’s record was as much about his impact outside of the legislative arena. Ike’s “Middle-of-the-Road” philosophy guided his foreign as much as his domestic policy. Indeed, like his attempts to use federal dollars to give state and local governments as well as individuals the power to act at home, his foreign policy sought to keep the United States from intervening abroad by bolstering its allies. Thus Ike funneled money to the French in Vietnam fighting the Ho Chi Minh led Communists, walked a tight line between helping Chiang Kai-Shek’s Taiwan without overtly provoking Mao Tse-Tung’s China, and materially backed native actors who destabilized “unfriendly” governments in Iran and Guatemala. The centerpiece of Ike’s foreign policy was “massive retaliation,” or the threat of nuclear force in the face of Communist expansion, thus getting more “bang” for his government “buck.” While Ike’s “mainstream” “middle-way” won broad popular support, his own party was slowly moving away from his positions. By 1964 the party had moved far enough to the Right to nominate Arizona Senator Barry Goldwater, the most conservative candidate in a generation. The political moderation of the Affluent Society proved little more than a way station on the road to liberal reform and a future conservative ascendancy.