The decade’s political landscape began with a watershed presidential election. Americans were captivated by the 1960 race between Republican Vice President Richard Nixon and Democratic Senator John F. Kennedy, two candidates who pledged to move the nation forward and invigorate an economy experiencing the worst recession since the Great Depression. Kennedy promised to use federal programs to strengthen the economy and address pockets of longstanding poverty, while Nixon called for a reliance on private enterprise and reduction of government spending. Both candidates faced criticism as well; Nixon had to defend Dwight Eisenhower’s domestic policies, while Kennedy, who was attempting to become the first Catholic president, had to counteract questions about his faith and convince voters that he was experienced enough to lead.

One of the most notable events of the Nixon-Kennedy presidential campaign was their televised debate in September, the first of its kind between major presidential candidates. The debate focused on domestic policy and provided Kennedy with an important moment to present himself as a composed, knowledgeable statesman. In contrast, Nixon, an experienced debater who faced higher expectations, looked sweaty and defensive. Radio listeners famously thought the two men performed equally well, but the TV audience was much more impressed by Kennedy, giving him an advantage in subsequent debates. Ultimately, the election was extraordinarily close; in the largest voter turnout in American history up to that point, Kennedy bested Nixon by less than one percentage point (34,227,096 to 34,107,646 votes). Although Kennedy’s lead in electoral votes was more comfortable at 303 to 219, the Democratic Party’s victory did not translate in Congress, where Democrats lost a few seats in both houses. As a result, Kennedy entered office in 1961 without the mandate necessary to achieve the ambitious agenda he would refer to as the New Frontier.

Kennedy’s assassination in Dallas in November of 1963 left the nation in a malaise. With the youthful, popular president gone, Vice President Lyndon Johnson was sworn in and tasked with fulfilling the liberal promises of the New Frontier. On a May morning in 1964, President Johnson laid out a sweeping vision for a package of domestic reforms known as the Great Society. Speaking before that year’s graduates of the University of Michigan, Johnson called for “an end to poverty and racial injustice” and challenged both the graduates and American people to “enrich and elevate our national life, and to advance the quality of our American civilization.” At its heart, he promised, the Great Society would uplift racially and economically disfranchised Americans, too long denied access to federal guarantees of equal democratic and economic opportunity, while simultaneously raising all Americans’ standards and quality of life.

The Great Society’s legislation was breathtaking in scope, and many of its programs and agencies are still with us today. Most importantly, the Civil Rights Act of 1964 and the Voting Rights Act of 1965 codified federal support for many of the civil rights movement’s goals by prohibiting job discrimination, abolishing the segregation of public accommodations, and providing vigorous federal oversight of southern states’ primary and general election laws in order to guarantee minority access to the ballot. Ninety years after Reconstruction, these measures effectively ended Jim Crow.

In addition to this civil rights orientation, however, the Great Society took on a range of quality of life concerns that seemed solvable at last in a society of such affluence. It established the first federal Food Stamp Program. Medicare and Medicaid would ensure access to quality medical care for the aged and poor. In 1965, the Elementary and Secondary Education Act was the first sustained and significant federal investment in public education, totaling more than $1 billion. Significant funds were poured into colleges and universities as well. To “elevate and enrich our national life,” the Great Society also established the National Endowment for the Arts and the National Endowment for the Humanities, federal investments in arts and letters that fund American cultural expression to this day.

While these programs persisted and even thrived, in the years immediately following this flurry of legislative activity, the national conversation surrounding Johnson’s domestic agenda largely focused on the $3 billion spent on War on Poverty programming within the Great Society’s Economic Opportunity Act of 1964. No EOA program was more controversial than Community Action, considered the cornerstone antipoverty program. Johnson’s antipoverty planners felt the key to uplifting disfranchised and impoverished Americans was involving poor and marginalized citizens in the actual administration of poverty programs, what they called “maximum feasible participation.” Community Action Programs would give disfranchised Americans a seat at the table in planning and executing federally funded programs that were meant to benefit themselves—a significant sea change in the nation’s efforts to confront poverty, which had historically relied upon local political and business elites or charitable organizations for administration.

In fact, Johnson himself had never conceived of poor Americans running their own poverty programs. While the president’s rhetoric offered a stirring vision of the future, he had singularly old-school notions for how his poverty policies would work. In contrast to “maximum feasible participation,” the President imagined a second New Deal: local elite-run public works camps that would instill masculine virtues in unemployed young men. Community Action almost entirely bypassed local administrations and sought to build grassroots civil rights and community advocacy organizations, many of which had originated in the broader civil rights movement. Despite widespread support for most Great Society programs, the War on Poverty increasingly became the focal point of domestic criticisms from the left and right. On the left, frustrated liberals recognized the president’s resistance to empowering minority poor and also assailed the growing war in Vietnam, the cost of which undercut domestic poverty spending. As racial unrest and violence swept across urban centers, critics from the right lambasted federal spending for “unworthy” and even criminal citizens. When Richard Nixon was elected in 1968, he moved swiftly to return control over federal poverty spending to local political elites.

Despite the fact that the Civil Rights and Voting Rights Acts and the War on Poverty were crucial catalysts for the rise of Republicans in the South and West, Nixon and subsequent presidents and Congresses have left largely intact the bulk of the Great Society. Many of its programs such as Medicare and Medicaid, food stamps, federal spending for arts and literature, and Head Start are considered by many to be effective forms of government action. Even Community Action programs, so fraught during their few short years of activity, inspired and empowered a new generation of minority and poverty community activists who had never before felt, as one put it, “this government is with us.”

While much of the rhetoric surrounding the 1960s focused on a younger, more liberal generation’s progressive ideas, conservatism maintained a strong presence on the American political scene. Few political figures in the decade embodied the working-class, conservative views held by millions of Americans quite like George Wallace. Wallace’s vocal stance on segregation was immortalized in his 1963 inaugural address as Alabama governor with the phrase: “Segregation now, segregation tomorrow, segregation forever!” Just as the civil rights movement began to gain unprecedented strength, Wallace became the champion of the many white southerners uninterested in the movement’s goals. Consequently, Wallace was one of the best examples of the very real opposition civil rights activists faced in the late twentieth century.

As governor, Wallace used his position to enforce segregation whenever possible. Just five months after becoming governor, in his “Stand in the Schoolhouse Door,” Wallace himself tried to block two African American students from enrolling at the University of Alabama. His efforts were largely symbolic, but they earned him national recognition as a political figure willing to fight for what many southerners saw as their traditional way of life. Wallace made similar efforts to try to block federally mandated integration of his state’s public, elementary, and secondary schools in the fall of 1963. In all cases, President John F. Kennedy had to supersede Wallace’s actions to ensure integration moved forward. 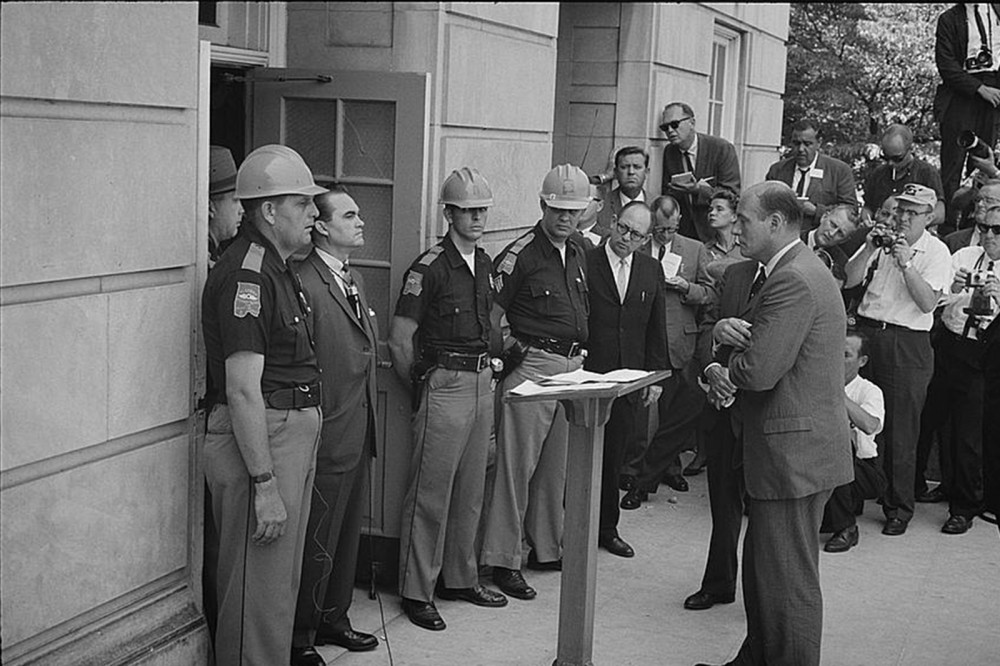 Alabama governor George Wallace stands defiantly at the door of the University of Alabama, blocking the attempted integration of the school. Wallace was perhaps the most notoriously pro-segregation politician of the 1960s, proudly proclaiming in his 1963 inaugural address “segregation now, segregation tomorrow, segregation forever.” Warren K. Leffler, “[Governor George Wallace attempting to block integration at the University of Alabama],” June 11, 1963. Library of Congress.

In contrast to Wallace’s traditional stance on southern race relations, he took a very nontraditional approach to maintain power at the end of his term as governor. Because the state of Alabama only allowed governors to serve one term at that time, Wallace persuaded his wife, Lurleen, to run for governor so that he could use his influence with her to help shape state politics. Not only did Lurleen win, other Wallace supporters helped remove the term limits on governors, opening up future opportunities for him to serve as governor. Wallace entered the national political fray in 1968, when he made an unsuccessful presidential bid as a third-party candidate. After 1970, he served three more terms as governor of Alabama, survived an assassination attempt while campaigning for president, and eventually repudiated the segregationist views that made him so famous.Beleaguered by an unpopular war, inflation, and domestic unrest, President Johnson opted against reelection in March of 1968—an unprecedented move in modern American politics. The forthcoming presidential election was shaped by Vietnam and the aforementioned unrest as much as the campaigns of Democratic nominee Vice President Hubert Humphrey, Republican Richard Nixon, and third-party challenger George Wallace. The Democratic Party was in disarray in the spring of 1968, when senators Eugene McCarthy and Robert Kennedy challenged Johnson’s nomination and the president responded with his shocking announcement. Nixon’s candidacy was aided further by riots that broke out across the country after the assassination of Martin Luther King, Jr., and the shock and dismay experienced after the slaying of Robert Kennedy in June. The Republican nominee’s campaign was defined by shrewd maintenance of his public appearances and a pledge to restore peace and prosperity to what he called “the silent center; the millions of people in the middle of the political spectrum.” This campaign appeal was carefully calibrated to attract suburban Americans by linking liberals in favor of an overbearing federal government with the Silent Majority’s implied inverse: noisy urban minorities. Many embraced Nixon’s message; a September 1968 poll found that 80 percent of Americans believed public order had “broken down.”Meanwhile, Humphrey struggled to distance himself from Johnson and maintain working-class support in northern cities, where voters were drawn to Wallace’s appeals for law and order and a rejection of civil rights. The vice president had a final surge in northern cities with the aid of union support, but it was not enough to best Nixon’s campaign. The final tally was close: Nixon won 43.3 percent of the popular vote (31,783,783), narrowly besting Humphrey’s 42.7 percent (31,266,006). Wallace, meanwhile, carried five states in the Deep South, and his 13.5 percent (9,906,473) of the popular vote constituted an impressive showing for a third-party candidate. The Electoral College vote was more decisive for Nixon; he earned 302 electoral votes, while Humphrey and Wallace received only 191 and 45 votes, respectively. Although Republicans won a few seats, Democrats retained control of both the House and Senate and made Nixon the first president in 120 years to enter office with the opposition party controlling both houses.