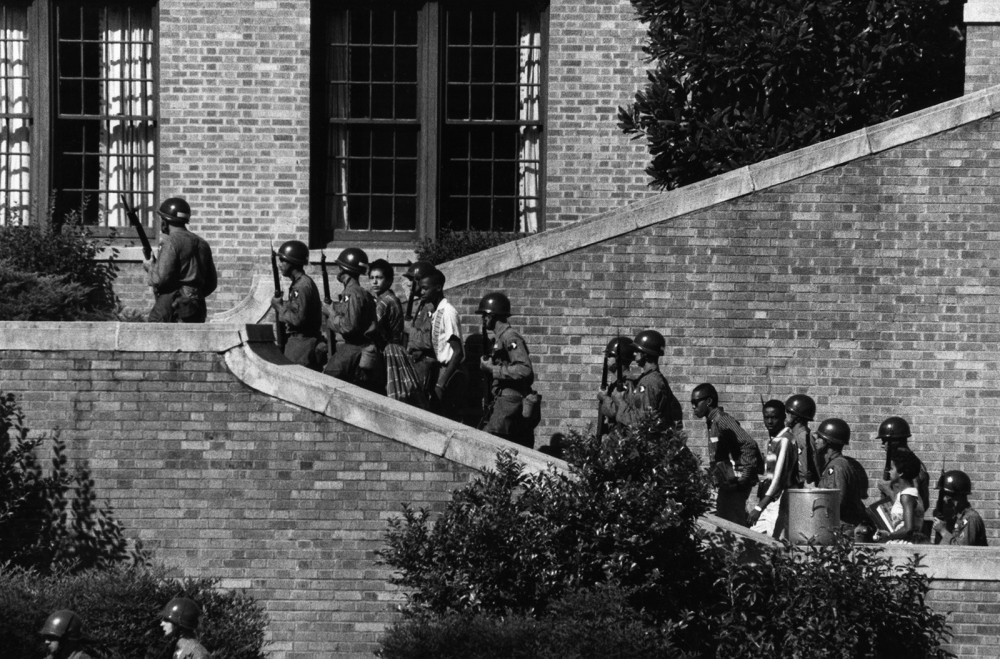 School desegregation was a tense experience for all involved, but none more so than the African American students brought into white schools. The “Little Rock Nine” were the first to do this in Arkansas; their escorts, the 101st Airborne Division of the U.S. Army, provided protection to these students who so bravely took that first step. Photograph, 1957. Wikimedia.

Older battles over racial exclusion also confronted postwar American society. One long-simmering struggle targeted segregated schooling. Since the Supreme Court’s decision in Plessy v. Ferguson (1896), black Americans, particularly in the American South, had fully felt the deleterious effects of segregated education. Their battle against Plessy for inclusion in American education stretched across half a century when the Supreme Court again took up the merits of “separate but equal.”

On May 17, 1954, after two years of argument, re-argument, and deliberation, Chief Justice Earl Warren announced the Supreme Court’s decision on segregated schooling in Oliver Brown, et al v. Board of Education of Topeka, et al. The court found by a unanimous 9-0 vote that racial segregation violated the Equal Protection Clause of the Fourteenth Amendment. The court’s decision declared, “Separate educational facilities are inherently unequal.” “Separate but equal” was made unconstitutional.

Decades of African American-led litigation, local agitation against racial inequality, and liberal Supreme Court justices made Brown v. Boardpossible. In the early 1930s, the National Association for the Advancement of Colored People (NAACP) began a concerted effort to erode the legal underpinnings of segregation in the American South. Legal, or de jure, segregation subjected racial minorities to discriminatory laws and policies. Law and custom in the South hardened anti-black restrictions. But through a series of carefully chosen and contested court cases concerning education, disfranchisement, and jury selection, NAACP lawyers such as Charles Hamilton Houston, Robert L. Clark, and future Supreme Court Justice Thurgood Marshall undermined Jim Crow’s constitutional underpinnings. Initially seeking to demonstrate that states systematically failed to provide African American students “equal” resources and facilities, and thus failed to live up to Plessy, by the late 1940s activists began to more forcefully challenge the assumptions that “separate” was constitutional at all. 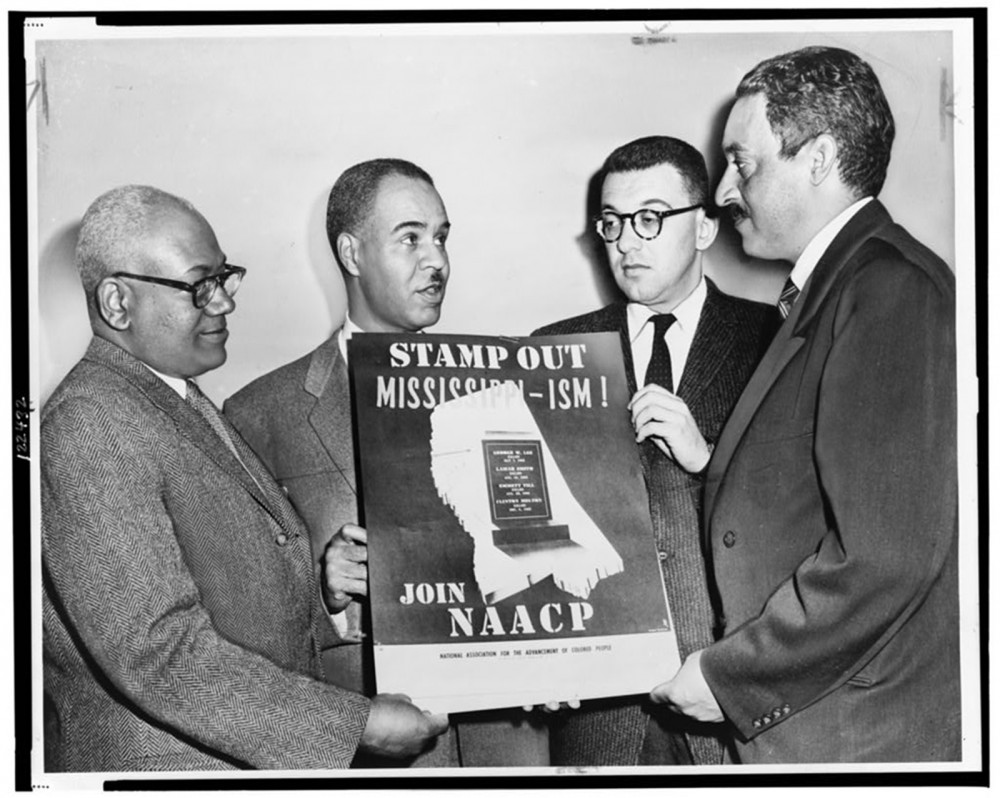 The NAACP was a central organization in the fight to end segregation, discrimination, and injustice based on race. NAACP leaders, including Thurgood Marshall (who would become the first African American Supreme Court Justice), hold a poster decrying racial bias in Mississippi in 1956. Photograph, 1956. Library of Congress.

Though remembered as just one lawsuit, Brown consolidated five separate cases that had originated in the southeastern United States: Briggs v. Elliott (South Carolina), Davis v. County School Board of Prince Edward County (Virginia), Beulah v. Belton (Delaware), Boiling v. Sharpe(Washington, D. C.), and Brown v. Board of Education (Kansas). Working with local activists already involved in desegregation fights, the NAACP purposely chose cases with a diverse set of local backgrounds to show that segregation was not just an issue in the Deep South, and that a sweeping judgment on the fundamental constitutionality of Plessy was needed.

Briggs v. Elliott had illustrated, on the one hand, the extreme deficiencies in segregated black schools. The first case accepted by the NAACP, Briggsoriginated in rural Clarendon County, South Carolina, where taxpayers in 1950 spent $179 to educate each white student while spending $43 for each black student. The district’s twelve white schools were cumulatively worth $637,850; the value of its sixty-one black schools (mostly dilapidated, over-crowded shacks), was $194,575. While Briggs underscored the South’s failure to follow Plessy, the Brown v. Board suit focused less on material disparities between black and white schools (which were significantly less than in places like Clarendon County) and more on the social and spiritual degradation that accompanied legal segregation. This case cut to the basic question of whether or not “separate” was itself inherently unequal. The NAACP said the two notions were incompatible. As one witness before the U. S. District Court of Kansas said, “the entire colored race is craving light, and the only way to reach the light is to start [black and white] children together in their infancy and they come up together.”

To make its case, the NAACP martialed historical and social scientific evidence. The Court found the historical evidence inconclusive, and drew their ruling more heavily from the NAACP’s argument that segregation psychologically damaged black children. To make this argument, association lawyers relied upon social scientific evidence, such as the famous doll experiments of Kenneth and Mamie Clark. The Clarks demonstrated that while young white girls would naturally choose to play with white dolls, young black girls would, too. The Clarks argued that black children’s aesthetic and moral preference for white dolls demonstrated the pernicious effects and self-loathing produced by segregation.

Identifying and denouncing injustice, though, is different from rectifying it. Though Brown repudiated Plessy, the Court’s orders did not extend to segregation in places other than public schools and, even then, while recognizing the historical importance of the decision, the justices set aside the divisive yet essential question of remediation and enforcement to preserve a unanimous decision. Their infamously ambiguous order in 1955 (what came to be known as Brown II) that school districts desegregate “with all deliberate speed” was so vague and ineffectual that it left the actual business of desegregation in the hands of those who opposed it.

In most of the South, as well as the rest of the country, school integration did not occur on a wide scale until well after Brown. Only in the 1964 Civil Rights Act did the federal government finally implement some enforcement of the Brown decision by threatening to withhold funding from recalcitrant school districts, financially compelling desegregation, but even then southern districts found loopholes. Court decisions such as Green v. New Kent County (1968) and Alexander v. Holmes (1969) finally closed some of those loopholes, such as “freedom of choice” plans, to compel some measure of actual integration.

When Brown finally was enforced in the South, the quantitative impact was staggering. In the early 1950s, virtually no southern black students attended white schools. By 1968, fourteen years after Brown, some eighty percent of black southerners remained in schools that were ninety- to one-hundred-percent nonwhite. By 1972, though, just twenty-five percent were in such schools, and fifty-five percent remained in schools with a simple nonwhite minority. By many measures, the public schools of the South ironically became the most integrated in the nation.

As a landmark moment in American history, Brown’s significance perhaps lies less in what immediate tangible changes it wrought in African American life—which were slow, partial, and inseparable from a much longer chain of events—than in the idealism it expressed and the momentum it created. The nation’s highest court had attacked one of the fundamental supports of Jim Crow segregation and offered constitutional cover for the creation of one of the greatest social movements in American history.