World War II affected nearly every aspect of life in the United States, and America’s racial relationships were not immune. African Americans, Mexicans and Mexican Americans, Jews, and Japanese Americans were profoundly impacted.

In early 1941, months before the Japanese attack on Pearl Harbor, A. Philip Randolph, president of the Brotherhood of Sleeping Car Porters, the largest black trade union in the nation, made headlines by threatening President Roosevelt with a march on Washington, D.C. In this “crisis of democracy,” Randolph said, defense industries refused to hire African Americans and the armed forces remained segregated. In exchange for Randolph calling off the march, Roosevelt issued Executive Order 8802, banning racial and religious discrimination in defense industries and establishing the Fair Employment Practices Committee (FEPC) to monitor defense industry hiring practices. While the armed forces would remain segregated throughout the war, and the FEPC had limited influence, the order showed that the federal government could stand against discrimination. The black workforce in defense industries rose from 3 percent in 1942 to 9 percent in 1945.

More than one million African Americans fought in the war. Most blacks served in segregated, non-combat units led by white officers. Some gains were made, however. The number of black officers increased from 5 in 1940 to over 7,000 in 1945. The all-black pilot squadrons, known as the Tuskegee Airmen, completed more than 1,500 missions, escorted heavy bombers into Germany, and earned several hundred merits and medals. Many bomber crews specifically requested the “Red Tail Angels” as escorts. And near the end of the war, the army and navy began integrating some of its platoons and facilities, before, in 1948, the U.S. government finally ordered the full integration of its armed forces. 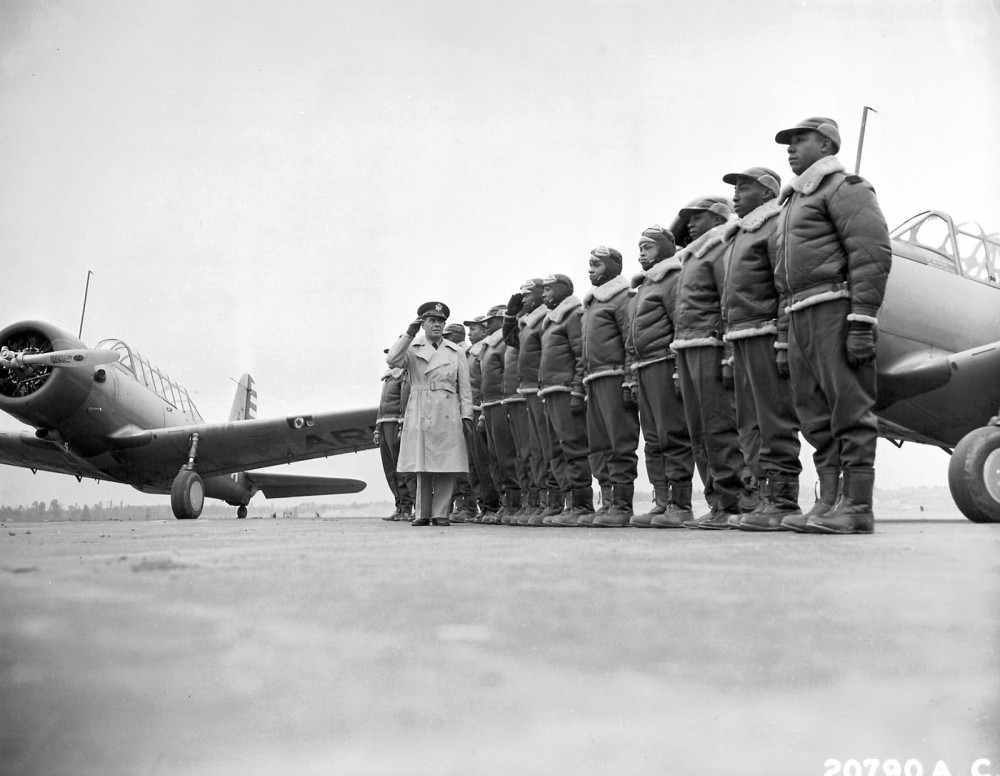 The Tuskegee Airmen stand at attention as Major James A. Ellison returns the salute of Mac Ross, one of the first graduates of the Tuskegee cadets. The photographs shows the pride and poise of the Tuskegee Airmen, who continued a tradition of African Americans honorably serving a country that still considered them second-class citizens. Photograph, 1941. Wikimedia.

While black Americans served in the armed forces (though they were segregated), on the home front they became riveters and welders, rationed food and gasoline, and bought victory bonds. But many black Americans saw the war as an opportunity not only to serve their country but to improve it. The Pittsburgh Courier, a leading black newspaper, spearheaded the “Double V” campaign. It called on African Americans to fight two wars: the war against Nazism and Fascism abroad and the war against racial inequality at home. To achieve victory, to achieve “real democracy,” the Courier encouraged its readers to enlist in the armed forces, volunteer on the home front, and fight against racial segregation and discrimination.

During the war, membership in the NAACP jumped tenfold, from 50,000 to 500,000. The Congress of Racial Equality (CORE) was formed in 1942 and spearheaded the method of nonviolent direct action to achieve desegregation. Between 1940 and 1950, some 1.5 million southern blacks, the largest number than any other decade since the beginning of the Great Migration, also indirectly demonstrated their opposition to racism and violence by migrating out of the Jim Crow South to the North. But transitions were not easy. Racial tensions erupted in 1943 in a series of riots in cities such as Mobile, Beaumont, and Harlem. The bloodiest race riot occurred in Detroit and resulted in the death of 25 blacks and 9 whites. Still, the war ignited in African Americans an urgency for equality that they would carry with them into the subsequent years.

Many Americans had to navigate American prejudice, and America’s entry into the war left foreign nationals from the belligerent nations in a precarious position. The Federal Bureau of Investigation targeted numbers on suspicions of disloyalty for detainment, hearings, and possible internment under the Alien Enemy Act. Those who received an order for internment were sent to government camps secured by barbed wire and armed guards. Such internmentss were supposed to be for cause. Then, on February 19, 1942, President Roosevelt signed Executive Order 9066, authorizing the removal any persons from designated “exclusion zones”—which ultimately covered nearly a third of the country—at the discretion of military commanders. 30,000 Japanese Americans fought for the United States in World War II, but wartime anti-Japanese sentiment reinforced historical prejudices and, under the order, persons of Japanese descent, both immigrants and American citizens, were detained and placed under the custody of the War Relocation Authority, the civil agency that supervised their relocation to internment camps. They lost their homes and jobs. The policy indiscriminately targeted Japanese-descended populations. Individuals did not receive individual review prior to their internment. This policy of mass exclusion and detention affected over 110,000 individuals. 70,000 were American citizens.

In its 1982 report, Personal Justice Denied, the congressionally appointed Commission on Wartime Relocation and Internment of Civilians concluded that “the broad historical causes” shaping the relocation program were “race prejudice, war hysteria, and a failure of political leadership.” Although the exclusion orders were found to have been constitutionally permissible under the vagaries of national security, they were later judged, even by the military and judicial leaders of the time, to have been a grave injustice against persons of Japanese descent. In 1988, President Reagan signed a law that formally apologized for internment and provided reparations to surviving internees.

But if actions taken during war would later prove repugnant, so too could inaction. As the Allies pushed into Germany and Poland, they uncovered the full extent of Hitler’s genocidal atrocities. The Allies liberated massive camp systems set up for the imprisonment, forced labor, and extermination of all those deemed racially, ideologically, or biologically “unfit” by Nazi Germany. But the Holocaust—the systematic murder of 11 million civilians, including 6 Jews—had been underway for years. How had America responded? 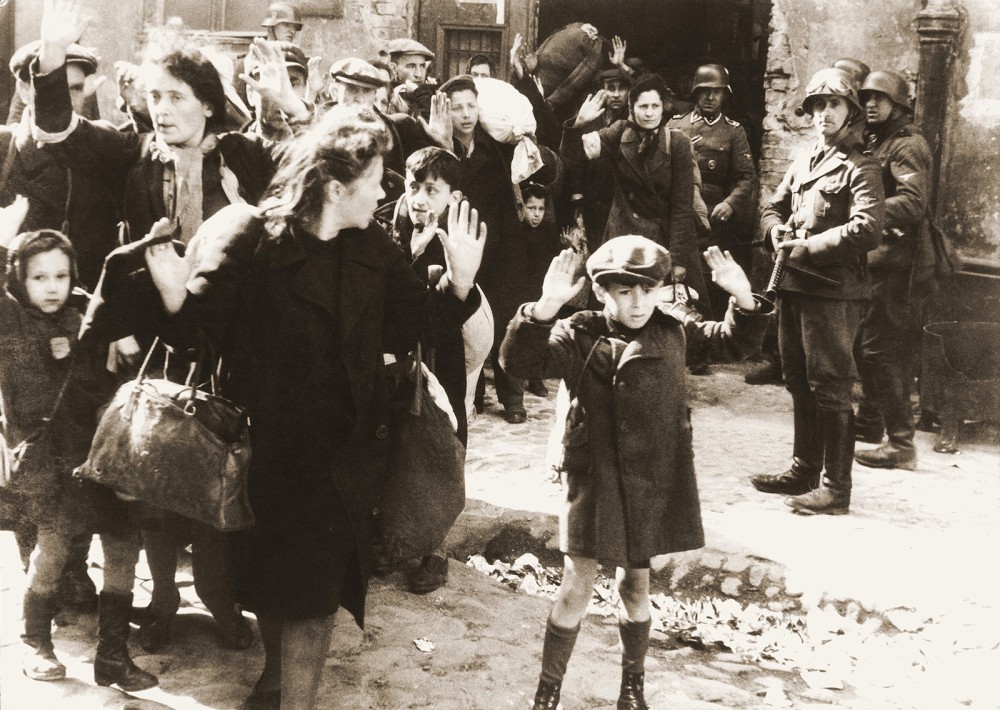 This photograph became one of the most well-known images from WWII. Originally from Jürgen Stroop’s May 1943 report to Heinrich Himmler, it circulated throughout Europe and America as an image of the Nazi Party’s brutality. The original German caption read: “Forcibly pulled out of dug-outs”. Wikimedia.

Initially, American officials expressed little official concern for Nazi persecutions. At the first signs of trouble in the 1930s, the State Department and most U.S. embassies did realtively little to aid European Jews. Roosevelt publically spoke out against the persecution, and even withdrew the U.S. ambassador to Germany after Kristallnacht. He pushed for the 1938 Evian Conference in France in which international leaders discussed the Jewish refugee problem and worked to expand Jewish immigration quotas by tens of thousands of people per year. But the conference came to nothing and the United States turned away countless Jewish refugees who requested asylum in the United States.

In 1939, the German ship St. Louis carried over 900 Jewish refugees. They could not find a country that would take them. The passengers could not receive visas under the United States’ quota system. A State Department wire to one passenger read that all must “await their turns on the waiting list and qualify for and obtain immigration visas before they may be admissible into the United States.” The ship cabled the president for special privilege, but the president said nothing. The ship was forced to return back to Europe. Hundreds of the St. Louis’s passengers would perish in the Holocaust.

Anti-Semitism still permeated the United States. Even if Roosevelt wanted to do more—it’s difficult to trace his own thoughts and personal views—he judged the political price for increasing immigration quotas as too high. In 1938 and 1939 the U.S. Congress debated the Wagner-Rogers Bill, an act to allow 20,000 German-Jewish children into the United States. First Lady Eleanor Roosevelt endorsed the measure but the president remained publicly silent. The bill was opposed by roughly two-thirds of the American public and was defeated. Historians speculate that Roosevelt, anxious to protect the New Deal and his rearmament programs, was unwilling to expend political capital to protect foreign groups that the American public had little interest in protecting.

Knowledge of the full extent of the Holocaust was slow in coming. When the war began, American officials, including Roosevelt, doubted initial reports of industrial death camps. But even when they conceded their existence, officials pointed to their genuinely limited options. The most plausible response was for the U.S. military was to bomb either the camps or the railroads leading to them, but those options were rejected by military and civilian officials who argued that it would do little to stop the deportations, would distract from the war effort, and could cause casualties among concentration camp prisoners. Whether bombing would have saved lives remains a hotly debated question.

Late in the war, Secretary of the Treasury Henry Morgenthau, himself born into a wealthy New York Jewish family, pushed through major changes in American policy. In 1944, he formed the War Refugees Board (WRB) and became a passionate advocate for Jewish refugees. The efforts of the WPB saved perhaps 200,000 Jews and 20,000 others. Morgenthau also convinced Roosevelt to issue a public statement condemning the Nazi’s persecution. But it was already 1944, and such policies were far too little, far too late.