Violence shattered the dream of biracial democracy. Still steeped in the violence of slavery, white southerners could scarcely imagine black free labor. Congressional investigator, Carl Schurz, reported that in the summer of 1865, southerners shared a near unanimous sentiment that “You cannot make the negro work, without physical compulsion.” Violence had been used in the antebellum period to enforce slave labor and to define racial difference. In the post-emancipation period it was used to stifle black advancement and return to the old order.

Much of life in the antebellum South had been premised on slavery; the social order rested upon a subjugated underclass and the labor system required unfree laborers. A notion of white supremacy and black inferiority undergirded it all: whites were understood as fit for freedom and citizenship; blacks for chattel slave labor. The Confederate surrender at Appomattox Court House and the subsequent adoption by the U.S. Congress of the Thirteenth Amendment destroyed the institution of American slavery and threw the southern society into disarray. The foundation of southern society had been decimated. While southern legislators tried to use black codes to restore the old order, while white citizens turned to terrorism to try to control the former slaves. 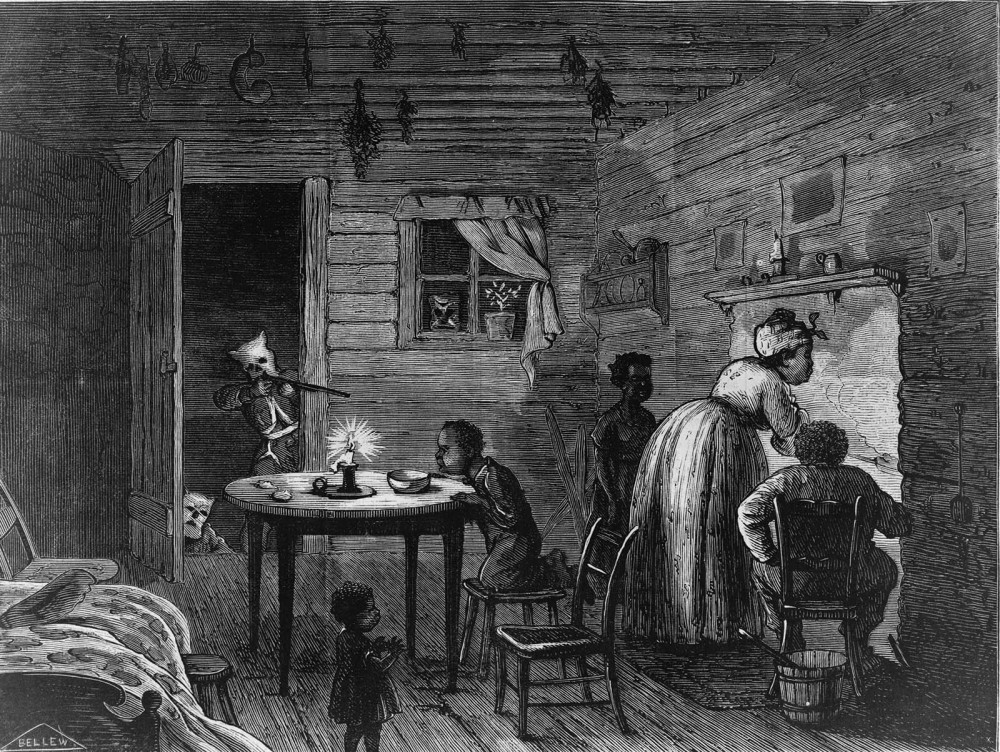 The Ku Klux Klan was just one of a number of vigilante groups that arose after the war to terrorize African Americans and Republicans throughout the South. The KKK brought violence into the voting polls, the workplace, and — as seen in this Harper’s Weekly print — the homes of black Americans. Frank Bellew, “Visit of the Ku-Klux,” 1872. Wikimedia.

Racial violence in the Reconstruction period took three major forms: urban riots, interpersonal fights, and organized vigilante groups. There were riots in southern cities several times during Reconstruction. The most notable were the riots in Memphis and New Orleans in 1866, but other large-scale urban conflicts erupted in places including Laurens, South Carolina in 1870; Colfax, Louisiana in 1873; another in New Orleans in 1874; Yazoo City, Mississippi in 1875; and Hamburg, South Carolina in 1876. Southern cities grew rapidly after the war as migrants from the countryside—particularly freed slaves—flocked to urban centers. Cities became centers of Republican control. But white conservatives chafed at the influx of black residents and the establishment of biracial politics. In nearly every conflict, white conservatives initiated violence in reaction to Republican rallies or conventions or elections in which black men were to vote. The death tolls of these conflicts remain incalculable—and victims were overwhelmingly black.

Even everyday violence between individuals disproportionally targeted African Americans during Reconstruction. Though African Americans gained citizenship rights like the ability to serve on juries as a result of the Civil Rights Act of 1866 and the Fourteenth Amendment to the federal constitution, southern white men were rarely successfully prosecuted for violence against black victims. White men beat or shot black men with relative impunity, and did so over minor squabbles, labor disputes, longstanding grudges, and crimes of passion. These incidents sometimes were reported to local federal authorities like the army or the Freedmen’s Bureau, but more often than not such violence was underreported and unprosecuted.

More premeditated was the violence committed by organized vigilante groups, sometimes called nightriders or bushwhackers. Groups of nightriders—called so because they often operated at night, under cover of darkness and wearing disguises—sought to curtail African American political involvement by harassing and killing black candidates and office holders and frightening voters away from the polls. They also aimed to limit black economic mobility by terrorizing freedpeople who tried to purchase land or otherwise become too independent from the white masters they used to rely on. They were terrorists and vigilantes, determined to stop the erosion of the antebellum South, and they were widespread and numerous, operating throughout the South. The Ku Klux Klan emerged in the late 1860s as the most infamous of these groups.

The Ku Klux Klan was organized in 1866 in Pulaski, Tennessee and had spread to nearly every state of the former Confederacy by 1868. The Klan drew heavily from the antebellum southern elite, but Klan groups sometimes overlapped with criminal gangs or former Confederate guerilla groups. The Klan’s imagery of white hoods and robes became so potent, and its violence so widespread, that many groups not formally associated with it were called Ku Kluxers, and to “Ku Klux” was used to mean to commit vigilante violence. While it is difficult to differentiate Klan actions from those of similar groups, such as the White Line, Knights of the White Camellia, and the White Brotherhood, the distinctions hardly matter. All such groups were part of a web of terror that spread throughout the South during Reconstruction. In Panola County, Mississippi, between August 1870 and December 1872, twenty-four Klan-style murders occurred. And nearby, in Lafayette County, Klansmen drowned thirty blacks in a single mass murder. Sometimes the violence was aimed at “uppity” blacks who had tried to buy land or dared to be insolent toward a white. Other times, as with the beating of Republican sheriff and tax collector Allen Huggins, the Klan targeted white politicians who supported freedpeople’s civil rights. Numerous, perhaps dozens, of Republican politicians were killed, either while in office or while campaigning. Thousands of individual citizens, men and women, white and black, had their homes raided and were whipped, raped, or murdered.

The federal government responded to southern paramilitary tactics by passing the Enforcement Acts between 1870 and 1871. The acts made it criminal to deprive African Americans of their civil rights. The acts also deemed violent Klan behavior as acts of rebellion against the United States and allowed for the use of U.S. troops to protect freedpeople. For a time, the federal government, its courts, and its troops, sought to put an end to the KKK and related groups. But the violence continued. By 1876, as southern Democrats reestablished “home rule” and “redeemed” the South from Republican rule, federal opposition to the KKK weakened. National attention shifted away from the South and the activities of the Klan, but African Americans remained trapped in a world of white supremacy that restricted their economic, social, and political rights. 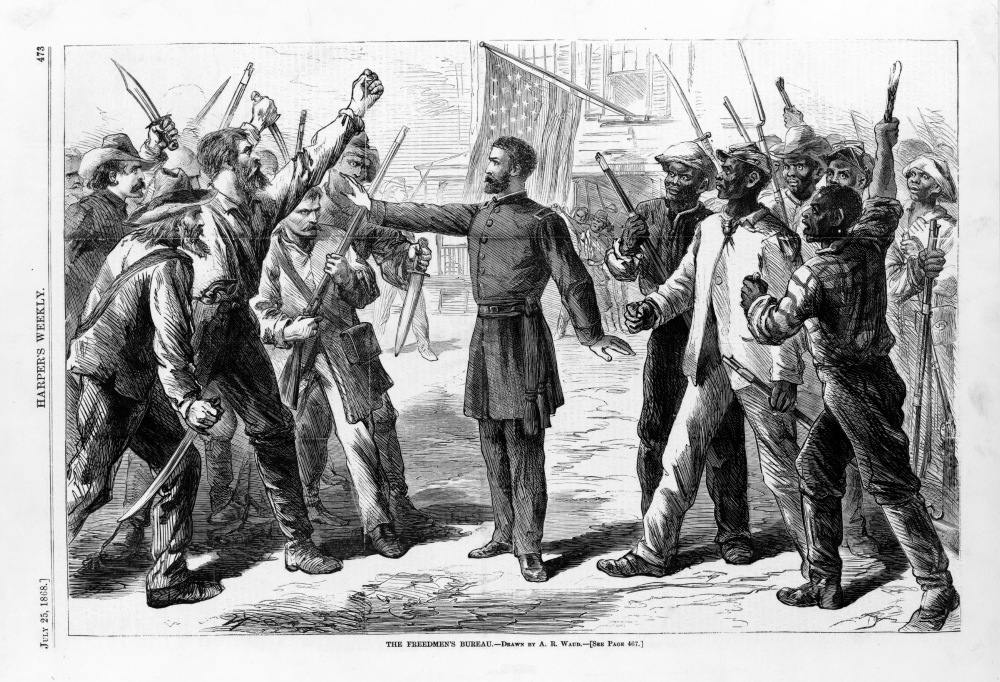 The national government, initiated by President Lincoln, created the Freedmen’s Bureau to assist freed people in securing their rights and their livelihoods. In this Harper’s Weekly print, The Freedmen’s Bureau official protecting the black men and women from the angry and riotous mob of white Americans stood as a representation of the entire Bureau. Soon the Bureau and the federal government would recognize that they could not accomplish a fraction of what they set out to do, including keeping African Americans safe and free in the South. Alfred R. Waud, “The Freedmen’s Bureau,” 1868. Library of Congress.

White conservatives would assert that Republicans, in denouncing violence, were “waving a bloody shirt” for political opportunity. The violence, according to many white conservatives, was fabricated, or not as bad as it was claimed, or an unavoidable consequence of the enfranchisement of African Americans. On December 22, 1871, R. Latham of Yorkville, South Carolina wrote to the New York Tribune, voicing the beliefs of many white southerners as he declared that “the same principle that prompted the white men at Boston, disguised as Indians, to board, during the darkness of night, a vessel with tea, and throw her cargo into the Bay, clothed some of our people in Ku Klux gowns, and sent them out on missions technically illegal. Did the Ku Klux do wrong? You are ready to say they did and we will not argue the point with you… Under the peculiar circumstances what could the people of South Carolina do but resort to Ku Kluxing?”

Victims and witnesses to the violence told a different story. Sallie Adkins of Warren County, Georgia, was traveling with her husband, Joseph, a Georgia state senator, when he was assassinated by Klansmen on May 10, 1869. She wrote President Ulysses S. Grant, asking for both physical protection and justice. “I am no Statesman,” she disclaimed, “I am only a poor woman whose husband has been murdered for his devotion to his country. I may have very foolish ideas of Government, States & Constitutions. But I feel that I have claims upon my country. The Rebels imprisoned my Husband. Pardoned Rebels murdered him. There is no law for the punishment of them who do deeds of this sort… I demand that you, President Grant, keep the pledge you made the nation—make it safe for any man to utter boldly and openly his devotion to the United States.”

Thousands of Americans murdered and thousands more were raped, whipped, and wounded during the violence of Reconstruction. The political and social consequences of the violence were as lasting as the physical and mental trauma suffered by victims and witnesses. Terrorism worked to end federal involvement in Reconstruction and helped to usher in a new era of racial repression.