September 11 and the War on Terror 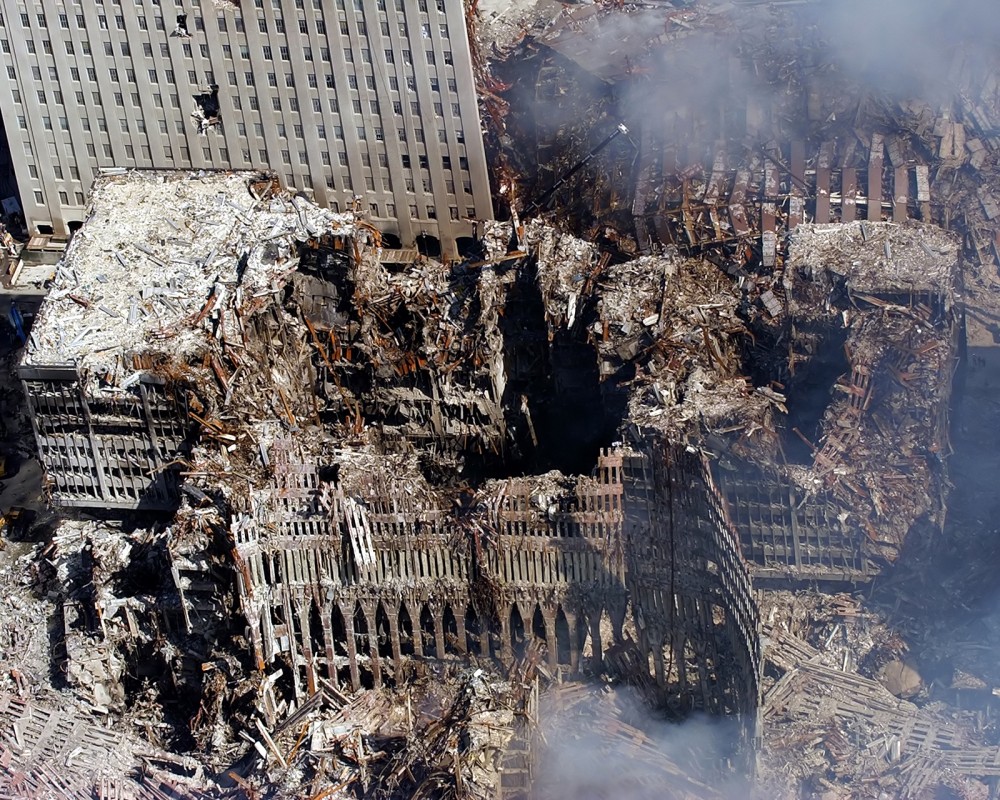 Six days after the September 11th attacks, the World Trade Center was still crumbling and dozens of men and women were still unaccounted for. Wikimedia.

The attacks shocked Americans. Bush addressed the nation and assured the country that “The search is underway for those who are behind these evil acts.” At Ground Zero three days later, Bush thanked the first responders. A worker said he couldn’t hear him. “I can hear you,” Bush shouted back, “The rest of the world hears you. And the people who knocked these buildings down will hear all of us soon.”

American intelligence agencies quickly identified the radical Islamic militant group al-Qaeda, led by the wealthy Saudi Osama Bin Laden, as the perpetrators of the attack. Sheltered in Afghanistan by the Taliban, the country’s Islamic government, al-Qaeda was responsible for a 1993 bombing of the World Trade Center and a string of attacks at U.S. embassies and military bases across the world. Bin Laden’s Islamic radicalism and his anti-American aggression attracted supporters across the region and, by 2001, al-Qaeda was active in over sixty countries.

The War on Terror

Although in his campaign Bush had denounced foreign “nation-building,” his administration was populated by “neo-conservatives,” firm believers in the expansion of American democracy and American interests abroad. Bush advanced what was sometimes called the Bush Doctrine, a policy in which the United States would have to the right to unilaterally and pre-emptively make war upon any regime or terrorist organization that posed a threat to the United States or to United States’ citizens. It would lead the United States to protracted conflicts in Afghanistan and Iraq and entangle the United States in nations across the world.

The United States and Afghanistan

The United States had a history in Afghanistan. When the Soviet Union invaded Afghanistan in December 1979 to quell an insurrection that threatened to topple Kabul’s communist government, the United States financed and armed anti-Soviet insurgents, the Mujahedeen. In 1981, the Reagan Administration authorized the Central Intelligence Agency (CIA) to provide the Mujahedeen with weapons and training to strengthen the insurgency. An independent wealthy young Saudi, Osama bin Laden, also fought with and funded the mujahedeen. The insurgents began to win. Afghanistan bled the Soviet Union dry. The costs of the war, coupled with growing instability at home, convinced the Soviets to withdraw from Afghanistan in 1989.

Osama bin Laden relocated al-Qaeda to Afghanistan after the country fell to the Taliban in 1996. The United States under Bill Clinton had launched cruise missiles into Afghanistan at al-Qaeda camps in retaliation for al-Qaeda bombings on American embassies in Africa.

Then, after September 11, with a broad authorization of military force, Bush administration officials made plans for military action against al-Qaeda and the Taliban. What would become the longest war in American history began with the launching of Operation Enduring Freedom in October 2001. Air and missile strikes hit targets across Afghanistan. U.S. Special Forces joined with fighters in the anti-Taliban Northern Alliance. Major Afghan cities fell in quick succession. The capital, Kabul, fell on November 13. Bin Laden and Al-Qaeda operatives retreated into the rugged mountains along the border of Pakistan in eastern Afghanistan. The United States military settled in.

The United States and Iraq

After the conclusion of the Gulf War in 1991, American officials established economic sanctions, weapons inspections, and “no-fly zones” in Iraq. By mid-1991, American warplanes were routinely patrolling Iraqi skies, where they periodically came under fire from Iraqi missile batteries. The overall cost to the United States of maintaining the two no-fly zones over Iraq was roughly $1 billion a year. Related military activities in the region added about another half million to the annual bill. On the ground in Iraq, meanwhile, Iraqi authorities clashed with U.N. weapons inspectors. Iraq had suspended its program for weapons of mass destruction, but Saddam Hussein fostered ambiguity about the weapons in the minds of regional leaders to forestall any possible attacks against Iraq.

In 1998, a standoff between Hussein and the United Nations over weapons inspections led President Bill Clinton to launch punitive strikes aimed at debilitating what was thought to be a fairly developed chemical weapons program. Attacks began on December 16, 1998. More than 200 cruise missiles fired from U.S. Navy warships and Air Force B-52 bombers flew into Iraq, targeting suspected chemical weapons storage facilities, missile batteries and command centers. Airstrikes continued for three more days, unleashing in total 415 cruise missiles and 600 bombs against 97 targets. The amount of bombs dropped was nearly double the amount used in the 1991 conflict.

The United States and Iraq remained at odds throughout the 1990s and early 2000, when Bush administration officials began considering “regime change.” The Bush Administration began publicly denouncing Saddam Hussein’s regime and its alleged weapons of mass destruction. It was alleged that Hussein was trying to acquire uranium and that it had aluminum tubes used for nuclear centrifuges. George W. Bush said in October, “Facing clear evidence of peril, we cannot wait for the final proof—the smoking gun—that could come in the form of a mushroom cloud.” The United States Congress passed the Authorization for Use of Military Force against Iraq Resolution, giving Bush the power to make war in Iraq.

In late 2002 Iraq began cooperating with U.N. weapons inspectors. But the Bush administration pressed on. On February 6, 2003, Secretary of State Colin Powell, who had risen to public prominence as an Army general during the Persian Gulf War in 1991, presented allegations of a robust Iraqi weapons program to the United Nations.

The first American bombs hit Baghdad on March 20, 2003. Several hundred-thousand troops moved into Iraq and Hussein’s regime quickly collapsed. Baghdad fell on April 9. On May 1, 2003, aboard the USS Abraham Lincoln, beneath a banner reading “Mission Accomplished,” George W. Bush announced that “Major combat operations in Iraq have ended.” No evidence of weapons of mass destruction had been found or would be found. And combat operations had not ended, not really. The insurgency had begun, and the United States would spend the next ten years struggling to contain it. 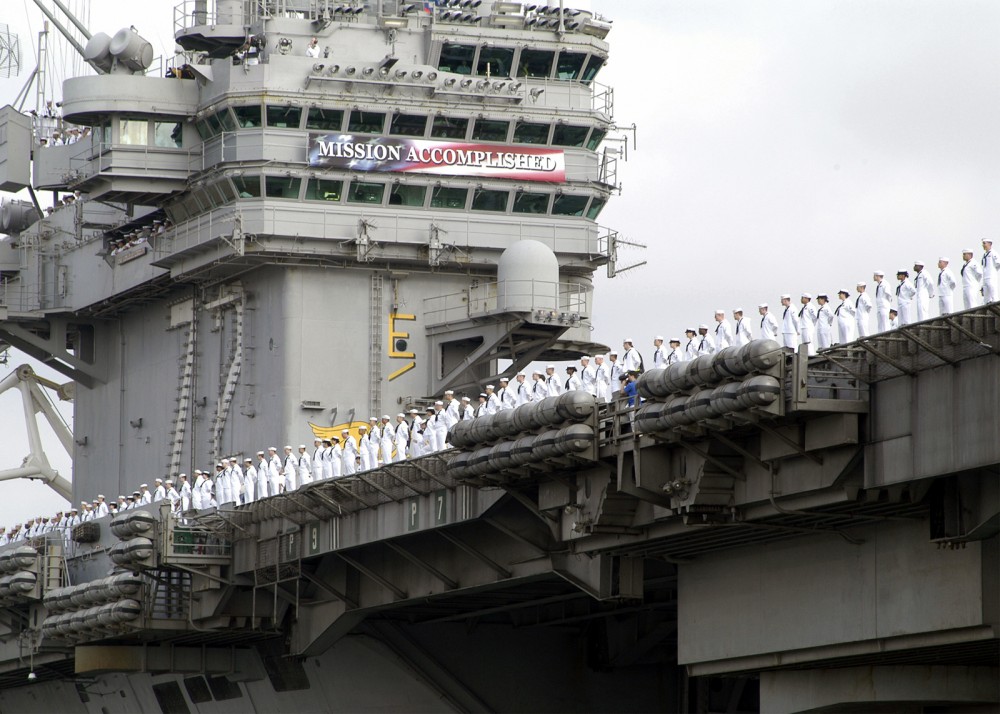 Despite the celebration of President Bush, combat operations in Iraq would continue for years more. In some ways, it has not ended. Although combat troops were withdrawn from Iraq by December 2011, President Obama announced the use of airstrikes against Iraqi militants in August 2014. Wikimedia.

Efforts by various intelligence gathering agencies led to the capture of Saddam Hussein, hidden in an underground compartment near his hometown, on December 13, 2003. The new Iraqi government found him guilty of crimes against humanity and he was hanged on December 30, 2006.