The Allotment Era and Resistance in the Native West

As the rails moved into the West, and more and more Americans followed, the situation for native groups deteriorated even further. Treaties negotiated between the United States and Native groups had typically promised that if tribes agreed to move to specific reservation lands, they would hold those lands collectively. But as American westward migration mounted, and open lands closed, white settlers began to argue that Indians had more than their fair share of land, that the reservations were too big and that Indians were using the land “inefficiently,” that they still preferred nomadic hunting instead of intensive farming and ranching.

By the 1880s, Americans increasingly championed legislation to allow the transfer of Indian lands to farmers and ranchers while many argued that allotting Indian lands to individual Native Americans, rather than to tribes, would encourage American-style agriculture and finally put Indians who had previously resisted the efforts of missionaries and federal officials on the path to “civilization.”

Passed by Congress on February 8, 1887, the Dawes General Allotment Act splintered Native American reservations into individual family homesteads. Each head of a Native family was to be allotted 160 acres, the typical size of a claim that any settler could establish on federal lands under the provisions of the Homestead Act. Single individuals over the age of 18 would receive an 80 acre allotment, and orphaned children received 40 acres. A four year timeline was established for Indian peoples to make their allotment selections. If at the end of that time no selection had been made, the Act authorized the Secretary of the Interior to appoint an agent to make selections for the remaining tribal members. To protect Indians from being swindled by unscrupulous land speculators, all allotments were to be held in trust—they could not be sold by allottees—for 25 years. Lands that remained unclaimed by tribal members after allotment would revert to federal control and be sold to American settlers. 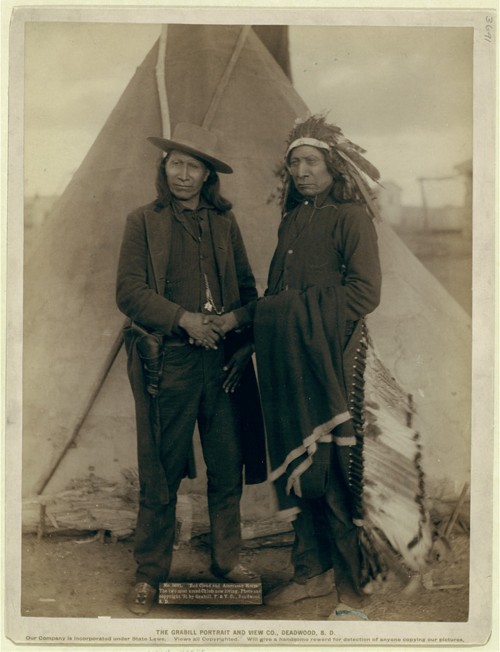 Red Cloud and American Horse—two of the most renowned Ogala chiefs—are seen clasping hands in front of a tipi on the Pine Ridge Reservation in South Dakota. Both men served as delegates to Washington, D.C., after years of actively fighting the American government. John C. Grabill, “‘Red Cloud and American Horse.’ The two most noted chiefs now living,” 1891. Library of Congress.

Americans touted the Dawes Act as an uplifting humanitarian reform, but it upended Indian lifestyles and left Indian groups without sovereignty over their lands. The act claimed that to protect Indian property rights, it was necessary to extend “the protection of the laws of the United States… over the Indians.” Tribal governments and legal principles could be superseded, or dissolved and replaced, by U.S. laws. Under the terms of the Dawes Act, native groups struggled to hold on to some measure of tribal sovereignty.

The stresses of conquest unsettled generations of Native Americans. Many took comfort from the words of prophets and holy men. In Nevada, on January 1, 1889, Northern Paiute prophet Wovoka experienced a great revelation. He had traveled, he said, from his earthly home in western Nevada to heaven and returned during a solar eclipse to prophesy to his people.  “You must not hurt anybody or do harm to anyone. You must not fight. Do right always,” he exhorted. And they must, he said, participate in a religious ceremony that came to be known as the Ghost Dance. If the people lived justly and danced the Ghost Dance, Wovoka said, their ancestors would rise from the dead, droughts would dissipate, the whites in the West would vanish, and the buffalo would once again roam the Plains.

Native American prophets had often confronted American imperial power. Some prophets, including Wovoka, incorporated Christian elements like heaven and a Messiah figure into indigenous spiritual traditions. And so if it was far from unique, Wovoka’s prophecy nevertheless caught on quickly and spread beyond the Paiutes. From across the West, members of the Arapaho, Bannock, Cheyenne, and Shoshone nations, among others, adopted the Ghost Dance religion. Perhaps the most avid Ghost Dancers—and certainly the most famous—were the Lakota Sioux.

The Lakota Sioux were in dire straits. South Dakota, formed out of land that had once belonged by treaty to the Lakotas, became a state in 1889. White homesteaders had poured in, reservations were carved up and diminished, starvation set it, corrupt federal agents cut food rations, and drought hit the Plains. Many Lakotas feared a future as the landless subjects of a growing American empire when a delegation of eleven men, led by Kicking Bear, joined Ghost Dance pilgrims on the rails westward to Nevada and returned to spread the revival in the Dakotas.

The energy and message of the revivals frightened Indian agents, who began arresting Indian leaders. The Chief Sitting Bull, along with several other whites and Indians, were killed in December, 1890, during a botched arrest, convincing many bands to flee the reservations to join the fugitive bands further west, where Lakota adherents of the Ghost Dance were preaching that the Ghost Dancers would be immune to bullets.

Two weeks later, an American cavalry unit intercepted a band of 350 Lakotas, including over 100 women and children, under the chief Spotted Elk (later known as Bigfoot). They were escorted to the Wounded Knee Creek where they encamped for the night. The following morning, December 29, the American cavalrymen entered the camp to disarm Spotted Elks band. Tensions flared, a shot was fired, and a skirmish became a massacre. The Americans fired their heavy weaponry indiscriminately into the camp. Two dozen cavalrymen had been killed by the Lakotas’ concealed weapons or by friendly fire, but, when the guns went silent, between 150 and 300 native men, women, and children were dead. 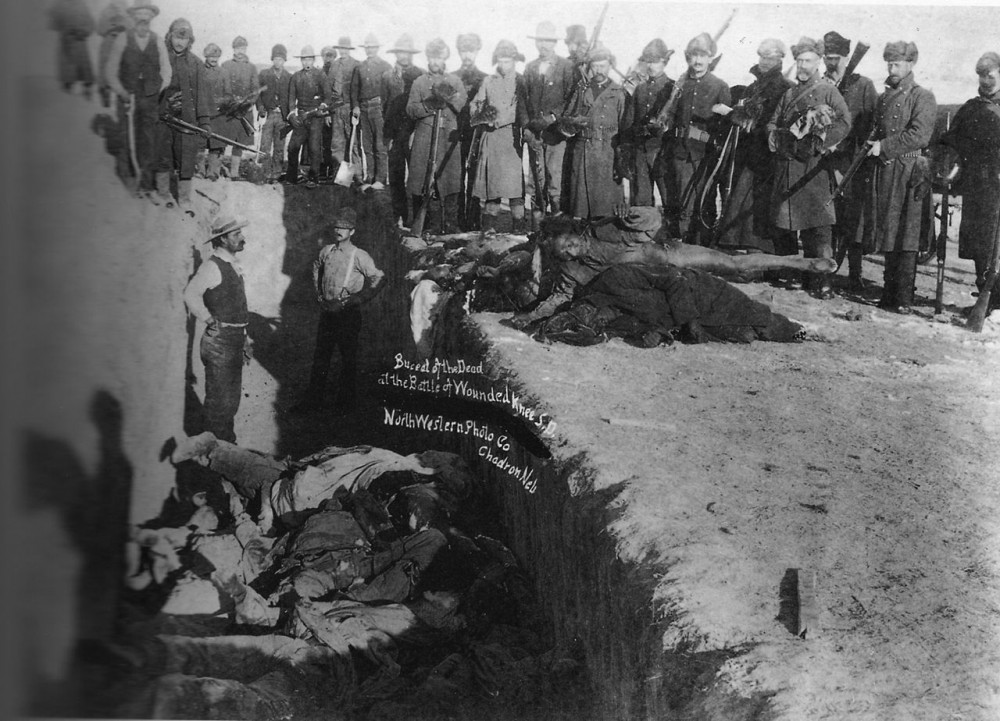 Burial of the dead after the massacre of Wounded Knee. U.S. Soldiers putting Indians in common grave; some corpses are frozen in different positions. South Dakota. 1891. Library of Congress.

Wounded Knee marked the end of sustained Native American resistance in the West. Individuals would continue to resist the pressures of assimilation and preserve traditional cultural practices, but sustained military defeats, the loss of sovereignty over land and resources, and the onset of crippling poverty on the reservations and marked the final decades of the nineteenth century as a particularly dark era for America’s western tribes. But, for Americans, it became mythical.