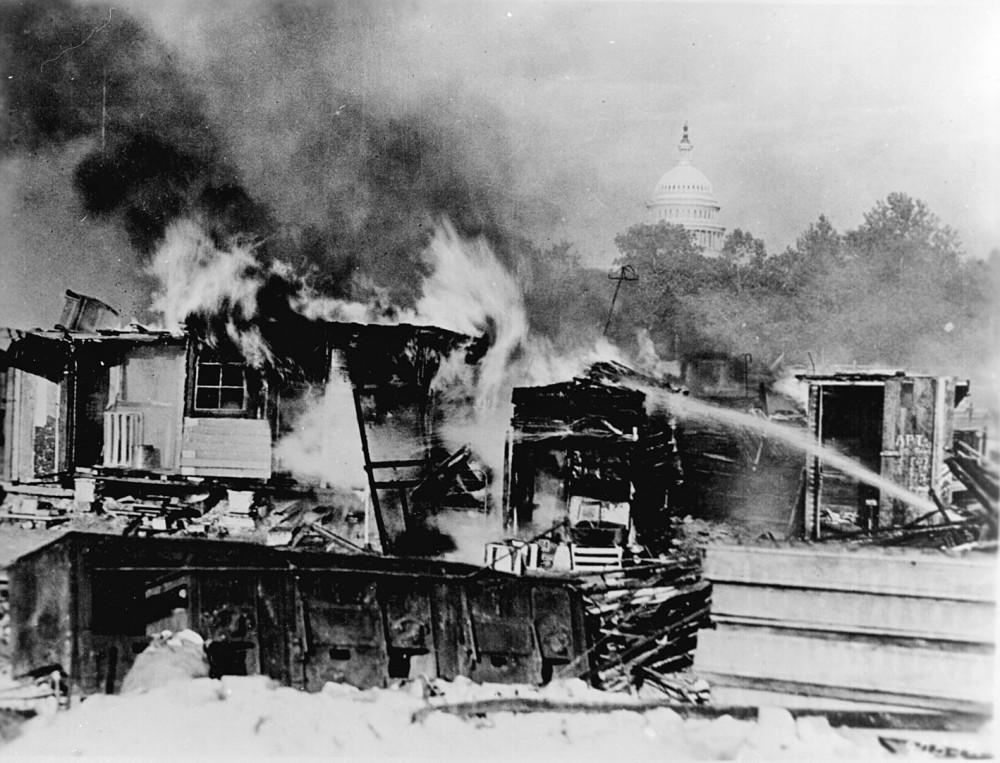 “Shacks, put up by the Bonus Army on the Anacostia flats, Washington, D.C., burning after the battle with the military. The Capitol in the background. 1932.” Wikimedia.

Hoover’s reaction to a major public protest sealed his legacy. In the summer of 1932, Congress debated a bill authorizing immediate payment of long-promised cash bonuses to veterans of World War I, originally scheduled to be paid out in 1945. Given the economic hardships facing the country, the bonus came to symbolize government relief for the most deserving recipients, and from across the country more than 15,000 unemployed veterans and their families converged on Washington, D.C. They erected a tent city across the Potomac River in Anacostia Flats, a “Hooverville” in the spirit of the camps of homeless and unemployed Americans then appearing in American cities.

Concerned with what immediate payment would do to the federal budget, Hoover opposed the bill, which was eventually voted down by the Senate. While most of the “Bonus Army” left Washington in defeat, many stayed to press their case. Hoover called the remaining veterans “insurrectionists” and ordered them to leave. When thousands failed to heed the vacation order, General Douglas MacArthur, accompanied by local police, infantry, cavalry, tanks, and a machine gun squadron, stormed the tent city and routed the Bonus Army. National media covered the disaster as troops chased down men and women, tear-gassed children, and torched the shantytown.

Hoover’s insensitivity toward suffering Americans, his unwillingness to address widespread economic problems, and his repeated platitudes about returning prosperity condemned his presidency. Hoover of course was not responsible for the Depression, not personally. But neither he nor his advisers conceived of the enormity of the crisis, a crisis his conservative ideology could neither accommodate nor address. As a result, Americans found little relief from Washington. They were on their own.