The End of Reconstruction

Reconstructed ended when national attention turned away from the integration of former slaves as equal citizens enabling white Democrats to recapture southern politics. Between 1868 and 1877, and accelerating after the Depression of 1873, national interest in Reconstruction dwindled as economic issues moved to the foreground. The biggest threat to Republican power in the South was violence and intimidation by white conservatives, staved off by the presence of federal troops in key southern cities. Reconstruction ended with the contested Presidential election of 1876, which put Republican Rutherford B. Hayes in office in exchange for the withdrawal of federal troops from the South.

Republicans and Democrats responded to the economic declines by shifting attention from Reconstruction to economic recovery. War weary from nearly a decade of bloody military and political strife, so-called Stalwart Republicans turned from idealism, focusing their efforts on economics and party politics. They grew to particular influence during Ulysses S. Grant’s first term (1868-1872). After the death of Thaddeus Stevens in 1868 and the political alienation of Charles Sumner by 1870, Stalwart Republicans assumed primacy in Republican Party politics, putting Reconstruction on the defensive within the very party leading it.

Meanwhile, New Departure Democrats gained strength by distancing themselves from pro-slavery Democrats and Copperheads. They focused on business, economics, political corruption, and trade, instead of Reconstruction. In the South, New Departure Democrats were called Redeemers, and were initially opposed by southerners who clung tightly to white supremacy and the Confederacy. But between 1869 and 1871, their home rule platform, asserting that good government was run by locals—meaning white Democrats, rather than black or white Republicans—helped end Reconstruction in three important states: Tennessee, Virginia, and Georgia.

In September 1873, Jay Cooke and Company declared bankruptcy, resulting in a bank run that spiraled into a six-year depression. The Depression of 1873 destroyed the nation’s fledgling labor movement, and helped quell northerners remaining idealism about Reconstruction. In the South, many farms were capitalized entirely through loans. After 1873, most sources of credit vanished, forcing many landowners to default, driving them into an over-saturated labor market. Wages plummeted, contributing to the growing system of debt peonage in the South that trapped workers in endless cycles of poverty. Democrats responded nationally in 1874, running on sound economics and fiscal policy, which allowed them to take control of the House of Representatives. 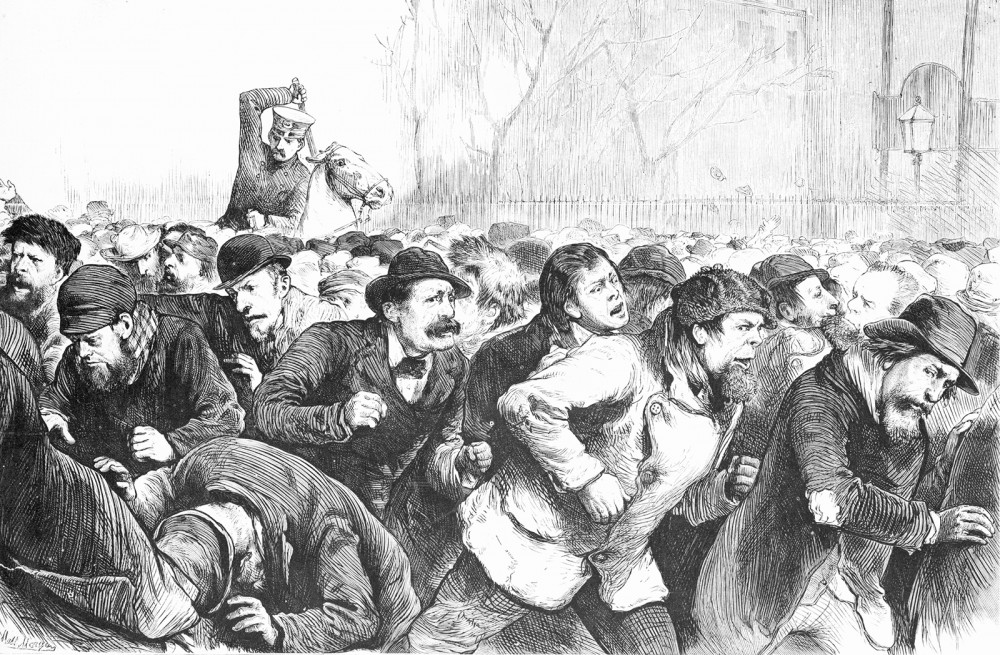 During the Panic of 1873, workers began demanding that the federal government help alleviate the strain on Americans. In January 1874, over 7,000 protesters congregated in New York City’s Tompkins Square to insist the government make job creation a priority. They were met with brutality as police dispersed the crowd, and consequently the unemployment movement lost much of its steam. Matt Morgen, Print of a crowd driven from Tompkins Square by the mounted police, in the Tompkins Square Riot of 1874, January 1874. Wikimedia.

On the eve of the 1876 Presidential election, the nation still reeling from depression, the Grant administration found itself no longer able to intervene in the South due to growing national hostility to interference in southern affairs. Scandalous corruption in the Grant Administration had sapped the national trust. By 1875, when armed conflict broke out in Mississippi and the state’s Republican governor urged federal involvement, national Republicans felt they had no choice but to ignore the plea. Meanwhile, the Republican candidate for governor of Ohio, Rutherford B. Hayes, won big without mentioning Reconstruction, focusing instead on honest government, economic recovery, and temperance. His success entered him into the running as a potential Presidential candidate. The stage was set for an election that would end Reconstruction as a national issue.

Republicans chose Rutherford B. Hayes as their nominee while Democrats chose Samuel J. Tilden, who ran on honest politics and home rule in the South. Allegations of voter fraud and intimidation emerged in the three states in which Reconstruction held strong and whose outcome would decide the result: Florida, Louisiana, and South Carolina. Indeed, those elections were fraught with violence and fraud because of the impunity with which white conservatives felt they could operate in their efforts to deter Republican voters. A special electoral commission voted along party lines—eight Republicans for, seven Democrats against—in favor of Hayes.

Democrats threatened to boycott Hayes’ inauguration. Rival governments arose claiming to recognize Tilden as the rightfully elected President. Republicans, fearing another sectional crisis, reached out to Democrats. In the Compromise of 1877 Democrats conceded the presidency to Hayes on the promise that all remaining troops would be removed from the South. In March 1877, Hayes was inaugurated; in April, the remaining troops were ordered out of the South. The Compromise allowed southern Democrats to return to power, no longer fearing reprisal from federal troops or northern politicians for their flagrant violence and intimidation of black voters.

After 1877, Republicans no longer had the political capital to intervene in the South in cases of violence and electoral fraud, resulting in fewer chances for freedpeople to hold state office. In certain locations with large populations of African Americans like South Carolina, freedpeople continued to hold some local offices for several years. Yet, with its most revolutionary aims thwarted by 1868, and economic depression and political turmoil taking even its most modest promises off the table by the early 1870s, most of the promises of Reconstruction were unmet.

Table. This table shows the military districts of the seceded states of the South, the date the state was readmitted into the Union, and the date when conservatives recaptured the state house.