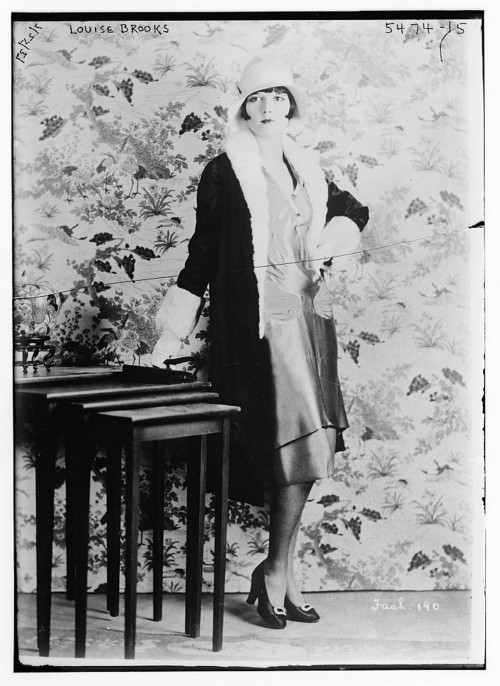 This “new breed” of women—known as the flapper—went against the gender proscriptions of the era, bobbing their hair, wearing short dresses, listening to jazz, and flouting social and sexual norms. While liberating in many ways, these behaviors also reinforced stereotypes of female carelessness and obsessive consumerism that would continue throughout the twentieth century. Bain News Service, “Louise Brooks,” undated. Library of Congress.

The rising emphasis on spending and accumulation nurtured a national ethos of materialism and individual pleasure. These impulses were embodied in the figure of the flapper, whose bobbed hair, short skirts, makeup, cigarettes, and carefree spirit captured the attention of American novelists such as F. Scott Fitzgerald and Sinclair Lewis. Rejecting the old Victorian values of desexualized modesty and self-restraint, young “flappers” seized opportunities for the public coed pleasures offered by new commercial leisure institutions, such as dance halls, cabarets, and nickelodeons, not to mention the illicit blind tigers and speakeasies spawned by Prohibition. So doing, young American women had helped to usher in a new morality that permitted women greater independence, freedom of movement, and access to the delights of urban living. In the words of psychologist G. Stanley Hall, “She was out to see the world and, incidentally, be seen of it.”

Such sentiments were repeated in an oft-cited advertisement in a 1930 edition of the Chicago Tribune: “Today’s woman gets what she wants. The vote. Slim sheaths of silk to replace voluminous petticoats. Glassware in sapphire blue or glowing amber. The right to a career. Soap to match her bathroom’s color scheme.” As with so much else in 1920s, however, sex and gender were in many ways a study in contradictions. It was the decade of the “New Woman,” and one in which only 10% of married women worked outside the home. It was a decade in which new technologies decreased time requirements for household chores, and one in which standards of cleanliness and order in the home rose to often impossible standards. It was a decade in which women would, finally, have the opportunity to fully exercise their right to vote, and one in which the often thinly-bound women’s coalitions that had won that victory splintered into various causes. Finally, it was a decade in which images such as the “flapper” would give women new modes of representing femininity, and one in which such representations were often inaccessible to women of certain races, ages, and socio-economic classes.

Women undoubtedly gained much in the 1920s. There was a profound and keenly felt cultural shift which, for many women, meant increased opportunity to work outside the home. The number of professional women, for example, significantly rose in the decade. But limits still existed, even for professional women. Occupations such as law and medicine remained overwhelmingly “male”: the majority of women professionals were in “feminized” professions such as teaching and nursing. And even within these fields, it was difficult for women to rise to leadership positions.

Further, it is crucial not to over-generalize the experience of all women based on the experiences of a much-commented upon subset of the population. A woman’s race, class, ethnicity, and marital status all had an impact on both the likelihood that she worked outside the home, as well as the types of opportunities that were available to her. While there were exceptions, for many minority women, work outside the home was not a cultural statement but rather a financial necessity (or both), and physically demanding, low-paying domestic service work continued to be the most common job type. Young, working class white women were joining the workforce more frequently, too, but often in order to help support their struggling mothers and fathers.

For young, middle-class, white women—those most likely to fit the image of the carefree flapper—the most common workplace was the office. These predominantly single women increasingly became clerks, jobs that had been primarily “male” earlier in the century. But here, too, there was a clear ceiling. While entry-level clerk jobs became increasingly feminized, jobs at a higher, more lucrative level remained dominated by men. Further, rather than changing the culture of the workplace, the entrance of women into the lower-level jobs primarily changed the coding of the jobs themselves. Such positions simply became “women’s work.” 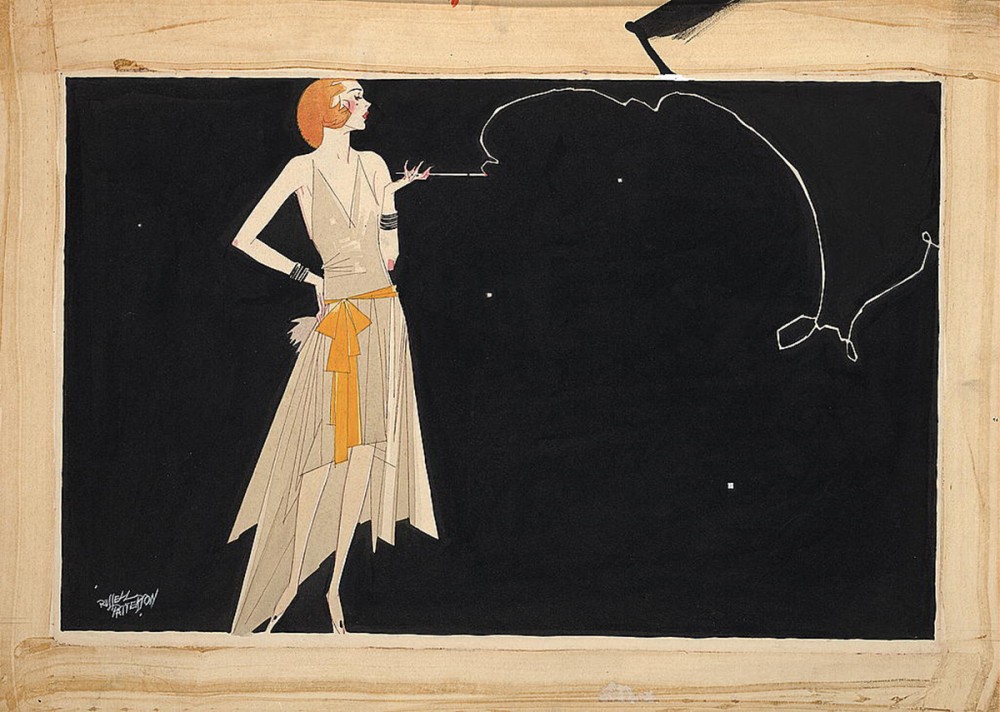 The frivolity, decadence, and obliviousness of the 1920s was embodied in the image of the flapper, the stereotyped carefree and indulgent woman of the Roaring Twenties depicted by Russell Patterson’s drawing. Russell Patterson, artist, “Where there’s smoke there’s fire,” c. 1920s. Library of Congress.

Finally, as these same women grew older and married, social changes became even subtler. Married women were, for the most part, expected to remain in the domestic sphere. And while new patterns of consumption gave them more power and, arguably, more autonomy, new household technologies and philosophies of marriage and child-rearing increased expectations, further tying these women to the home—a paradox that becomes clear in advertisements such as the one in the Chicago Tribune. Of course, the number of women in the workplace cannot exclusively measure changes in sex and gender norms. Attitudes towards sex, for example, continued to change in the 1920s, as well, a process that had begun decades before. This, too, had significantly different impacts on different social groups. But for many women—particularly young, college-educated white women—an attempt to rebel against what they saw as a repressive “Victorian” notion of sexuality led to an increase in premarital sexual activity strong enough that it became, in the words of one historian, “almost a matter of conformity.”

In the homosexual community, meanwhile, a vibrant gay culture grew, especially in urban centers such as New York. While gay males had to contend with increased policing of the gay lifestyle (especially later in the decade), in general they lived more openly in New York in the 1920s than they would be able to for many decades following World War II. At the same time, for many lesbians in the decade, the increased sexualization of women brought new scrutiny to same-sex female relationships previously dismissed as harmless.

Ultimately, the most enduring symbol of the changing notions of gender in the 1920s remains the flapper. And indeed, that image was a “new” available representation of womanhood in the 1920s. But it is just that: a representation of womanhood of the 1920s. There were many women in the decade of differing races, classes, ethnicities, and experiences, just as there were many men with different experiences. For some women, the 1920s were a time of reorganization, new representations and new opportunities. For others, it was a decade of confusion, contradiction, new pressures, and struggles new and old.