“Wall street owns the country,” the Populist leader Mary Elizabeth Lease told dispossessed farmers around 1890. “It is no longer a government of the people, by the people, and for the people, but a government of Wall Street, by Wall Street, and for Wall Street.” Farmers, who remained a majority of the American population through the first decade of the twentieth century, were hit especially hard by industrialization. The expanding markets and technological improvements that increased efficiency also decreased commodity prices. Commercialization of agriculture put farmers in the hands of bankers, railroads, and various middle men. As the decades passed, more and more farmers fell ever farther into debt, lost their land, and were forced to enter the industrial workforce or, especially in the South, became landless farmworkers.

The rise of industrial giants reshaped the American countryside and the Americans who called it home. Railroad spur lines, telegraph lines, and credit crept into farming communities and linked rural Americans, who still made up a majority of the country’s population, with towns, regional cities, American financial centers in Chicago and New York, and, eventually, London and the world’s financial markets. Meanwhile, improved farm machinery, easy credit, and the latest consumer goods flooded the countryside. But new connections and new conveniences came at a price.

Farmers had always been dependent on the whims of the weather and local markets. But now they staked their financial security on a national economic system subject to rapid price swings, rampant speculation, and limited regulation. Frustrated American farmers attempted to reshape the fundamental structures of the nation’s political and economic systems, systems they believed enriched parasitic bankers and industrial monopolists at the expense of the many laboring farmers who fed the nation by producing its many crops and farm goods. Their dissatisfaction with an erratic and impersonal system put many of them at the forefront of what would become perhaps the most serious challenge to the established political economy of Gilded Age America. Farmers organized, and launched their challenge first through the cooperatives of the Farmers’ Alliance and later through the politics of the People’s (or Populist) Party.

Mass production and business consolidations spawned giant corporations that monopolized nearly every sector of the U.S. economy in the decades after the Civil War. In contrast, the economic power of the individual farmer sunk into oblivion. Threatened by ever-plummeting commodity prices and ever-rising indebtedness, Texas agrarians met in Lampasas in 1877 and organized the first Farmers’ Alliance to restore some economic power to farmers as they dealt with railroads, merchants, and bankers. If big business would rely on their numerical strength to exert their economic will, why shouldn’t farmers unite to counter that power? They could share machinery, bargain from wholesalers, and negotiate higher prices for their crops. Over the following years, organizers spread from town to town across the former Confederacy, Midwest, and the Great Plains, holding evangelical-style camp meetings, distributing pamphlets, and establishing over 1,000 Alliance newspapers. As the Alliance spread, so too did its near-religious vision of the nation’s future as a “cooperative commonwealth” that would protect the interests of the many from the predatory greed of the few. At its peak, the Farmers’ Alliance claimed 1,500,000 members meeting in 40,000 local sub-alliances. 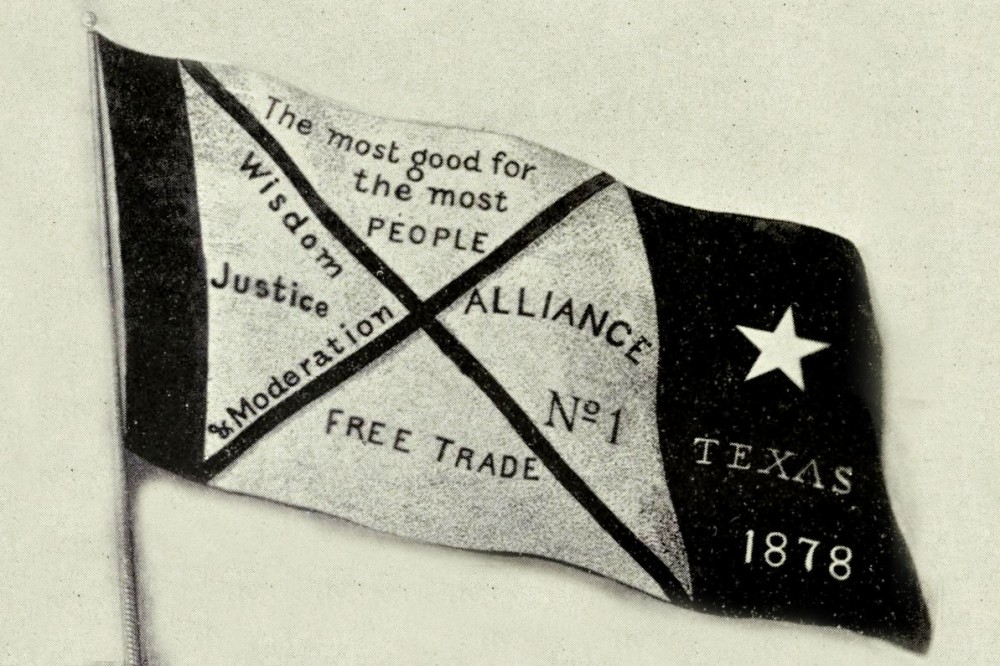 The banner of the first Texas Farmers’ Alliance.

The Alliance’s most innovative programs were a series of farmer’s cooperatives that enabled farmers to negotiate higher prices for their crops and lower prices for the goods they purchased. These cooperatives spread across the South between 1886 and 1892 and claimed more than a million members at its high point. While most failed financially, these “philanthropic monopolies,” as one Alliance speaker termed them, inspired farmers to look to large-scale organization to cope with their economic difficulties. But cooperation was only part of the Alliance message.

In the South, Alliance-backed Democratic candidates won 4 governorships and 48 congressional seats in 1890. But at a time when falling prices and rising debts conspired against the survival of family farmers, the two political parties seemed incapable of representing the needs of poor farmers. And so Alliance members organized a political party—the People’s Party, or the Populists, as they came to be known. The Populists attracted supporters across the nation by appealing to those convinced that there were deep flaws in the political economy of Gilded Age America, flaws that both political parties refused to address. Veterans of earlier fights for currency reform, disaffected industrial laborers, proponents of the benevolent socialism of Edward Bellamy’s popular Looking Backward, and the champions of Henry George’s farmer-friendly “single-tax” proposal joined Alliance members in the new party. The Populists nominated former Civil War general James B. Weaver as their presidential candidate at the party’s first national convention in Omaha, Nebraska, on July 4, 1892.

At that meeting the party adopted a platform that crystallized the Alliance’s cooperate program into a coherent political vision. The platform’s preamble, written by longtime political iconoclast and Minnesota populist Ignatius Donnelly, warned that “[t]he fruits of the toil of millions [had been] boldly stolen to build up colossal fortunes for a few.” Taken as a whole, the Omaha Platform and the larger Populist movement sought to counter the scale and power of monopolistic capitalism with a strong, engaged, and modern federal government. The platform proposed an unprecedented expansion of federal power. It advocated nationalizing the country’s railroad and telegraph systems to ensure that essential services would be run in the best interests of the people. In an attempt to deal with the lack of currency available to farmers, it advocated postal savings banks to protect depositors and extend credit. It called for the establishment of a network of federally-managed warehouses—called subtreasuries—which would extend government loans to farmers who stored crops in the warehouses as they awaited higher market prices. To save debtors it promoted an inflationary monetary policy by monetizing silver. Direct election of Senators and the secret ballot would ensure that this federal government would serve the interest of the people rather than entrenched partisan interests and a graduated income tax would protect Americans from the establishment of an American aristocracy. Combined, these efforts would, Populists believed, help to shift economic and political power back toward the nation’s producing classes.

In the Populists first national election campaign in 1892, Weaver received over one million votes (and 22 electoral votes), a truly startling performance that signaled a bright future for the Populists. And when the Panic of 1893 sparked the worst economic depression the nation had ever yet seen, the Populist movement won further credibility and gained even more ground. Kansas Populist Mary Lease, one of the movement’s most fervent speakers, famously, and perhaps apocryphally, called on farmers to “raise less corn and more Hell.” Populist stump speakers crossed the country, speaking with righteous indignation, blaming the greed of business elites and corrupt party politicians for causing the crisis fueling America’s widening inequality. Southern orators like Texas’ James “Cyclone” Davis and Georgian firebrand Tom Watson stumped across the South decrying the abuses of northern capitalists and the Democratic Party. Pamphlets such as W.H. Harvey’s Coin’s Financial School and Henry D. Lloyd’s Wealth against Commonwealth provided Populist answers to the age’s many perceived problems. The faltering economy combined with the Populist’s extensive organizing. In the 1894 elections, Populists elected six senators and seven representatives to Congress. The third party seemed destined to conquer American politics.

The movement, however, still faced substantial obstacles, especially in the South. The failure of Alliance-backed Democrats to live up to their campaign promises drove some southerners to break with the party of their forefathers and join the Populists. Many, however, were unwilling to take what was, for southerners, a radical step. Southern Democrats, for their part, responded to the Populist challenge with electoral fraud and racial demagoguery. Both severely limited Populist gains. The Alliance struggled to balance the pervasive white supremacy of the American South with their call for a grand union of the producing class. American racial attitudes—and its virulent southern strain—simply proved too formidable. Democrats race-baited Populists and Populists capitulated. The Colored Farmers Alliance, which had formed as a segregated sister organization to the Southern Alliance, and had as many as 250,000 members at its peak, fell prey to racial and class-based hostility. The group went into rapid decline in 1891 when faced with the violent white repression of a number of Colored Alliance-sponsored cotton-picker strikes. Racial mistrust and division remained the rule, even among Populists, and even in North Carolina, where a political marriage of convenience between Populists and Republicans resulted in the election of Populist Marion Butler to the Senate. Populists opposed Democratic corruption, but this did not necessarily make them champions of interracial democracy. As Butler explained to an audience in Edgecome County, “[w]e are in favor of white supremacy, but we are not in favor of cheating and fraud to get it.” In fact, across much of the South, Populists and Farmers Alliance members were often at the forefront of the movement for disfranchisement and segregation.

Populism exploded in popularity. The first major political force to tap into the vast discomfort of many Americans with the disruptions wrought by industrial capitalism, the Populist Party seemed poise to capture political victory. And yet, even as Populism gained national traction, the movement was stumbling. The party’s often divided leadership found it difficult to shepherd what remained a diverse and loosely organized coalition of reformers towards unified political action. The Omaha platform was a radical document, and some state party leaders selectively embraced its reforms. More importantly, the institutionalized parties were still too strong, and the Democrats loomed, ready to swallow populist frustrations and inaugurate a new era of American politics.