The Rise of Suburbs 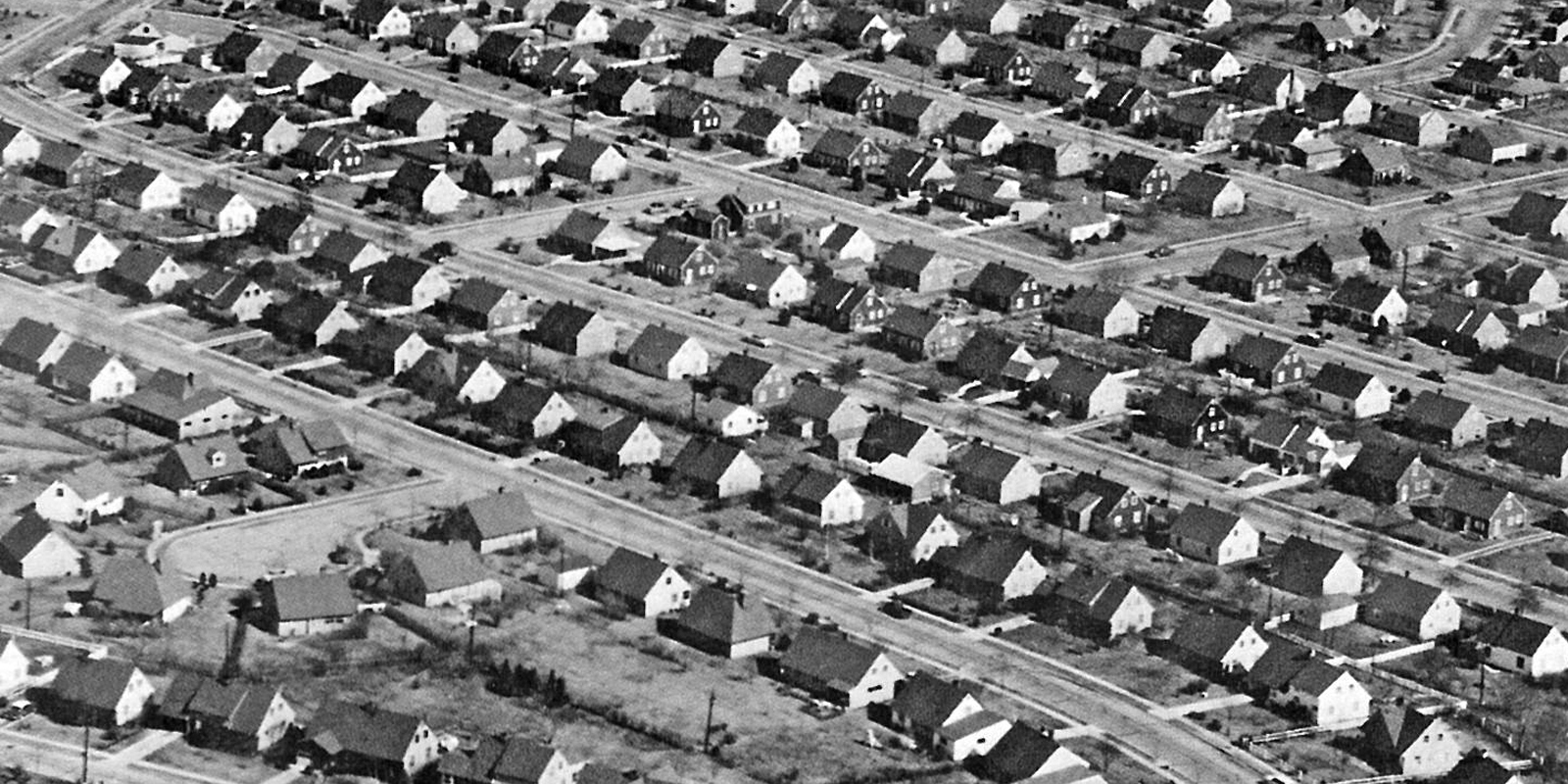 While the electric streetcar of the late-nineteenth century facilitated the outward movement of the well to do, the seeds of a suburban nation were planted in the mid-twentieth century. At the height of the Great Depression, in 1932, some 250,000 households lost their property to foreclosure. A year later, half of all U.S. mortgages were in default. The foreclosure rate stood at more than a 1,000 per day. In response, FDR’s New Deal created the Home Owners Loan Corporation (HOLC), which began purchasing and refinancing existing mortgages at risk of default. HOLC introduced the amortized mortgage, allowing borrowers to pay back interest and principle over twenty to thirty years instead of the then standard five-year mortgage that carried large balloon payments at the end of the contract. Though homeowners paid more for their homes under this new system, home-ownership was opened to the multitudes who could now gain residential stability, lower monthly mortgage payments, and accrue equity and wealth as property values rose over time.

Additionally, the Federal Housing Administration (FHA), another New Deal organization, increased access to homeownership by insuring mortgages and protecting lenders from financial loss in the event of a default. Though only slightly more than a third of homes had an FHA backed mortgage by 1964, FHA backed loans had a ripple effect with private lenders granting more and more home loans even to non-FHA backed mortgages. Though started in the midst of the Great Depression, the effects of government programs and subsidies like HOLC and the FHA were fully felt in the postwar economy and fueled the growth of homeownership and the rise of the suburbs.

Though domestic spending programs like HOLC and FHA helped create the outlines of the new consumer economy, United States involvement and the Allied victory in World War II pushed the country out of depression and into a sustained economic boom. Wartime spending exploded and, after the war, sustained spending fueled further growth. Government expenditures provided loans to veterans, subsidized corporate research and development, and built the Interstate Highway System. In the decades after World War II, business boomed, unionization peaked, wages rose, and sustained growth buoyed a new consumer economy. The Servicemen’s Readjustment Act (The G.I. Bill), passed in 1944, offered low-interest home loans, a stipend to attend college, loans to start a business, and unemployment benefits.

The rapid growth of homeownership and the rise of suburban communities helped drive the postwar economic boom. Suburban neighborhoods of single-family homes tore their way through the outskirts of cities. William Levitt built the first Levittown, the archetype suburban community, in 1946 in Long Island, New York. Purchasing mass acreage, “subdividing” lots, and contracted crews to build countless homes at economies of scale, Levitt offered affordable suburban housing to veterans and their families. Levitt became the prophet of the new suburbs, heralding a massive internal migration. The country’s suburban share of the population rose from 19.5% in 1940 to 30.7% by 1960. Homeownership rates rose from 44% in 1940 to almost 62% in 1960. Between 1940 and 1950, suburban communities of greater than 10,000 people grew 22.1%, and planned communities grew at an astonishing rate of 126.1%. As historian Lizabeth Cohen notes, these new suburbs “mushroomed in territorial size and the populations they harbored.” Between 1950 and 1970, America’s suburban population nearly doubled to 74 million, with 83 percent of all population growth occurring in suburban places.

The postwar construction boom fed into countless industries. As manufacturers converted back to consumer goods after the war, and as the suburbs developed, appliance and automobile sales rose dramatically. Flush with rising wages and wartime savings, homeowners also used newly created installment plans to buy new consumer goods at once instead of saving for years to make major purchases. The mass-distribution of credit cards, first issued in 1950, further increased homeowners’ access to credit. Fueled by credit and no longer stymied by the Depression or wartime restrictions, consumers bought countless washers, dryers, refrigerators, freezers, and, suddenly, televisions. The percentage of Americans that owned at least one television increased from 12% in 1950 to more than 87% in 1960. This new suburban economy also led to increased demand for automobiles. The percentage of American families owning cars increased from 54% in 1948 to 74% in 1959. Motor fuel consumption rose from some 22 million gallons in 1945 to around 59 million gallons in 1958. 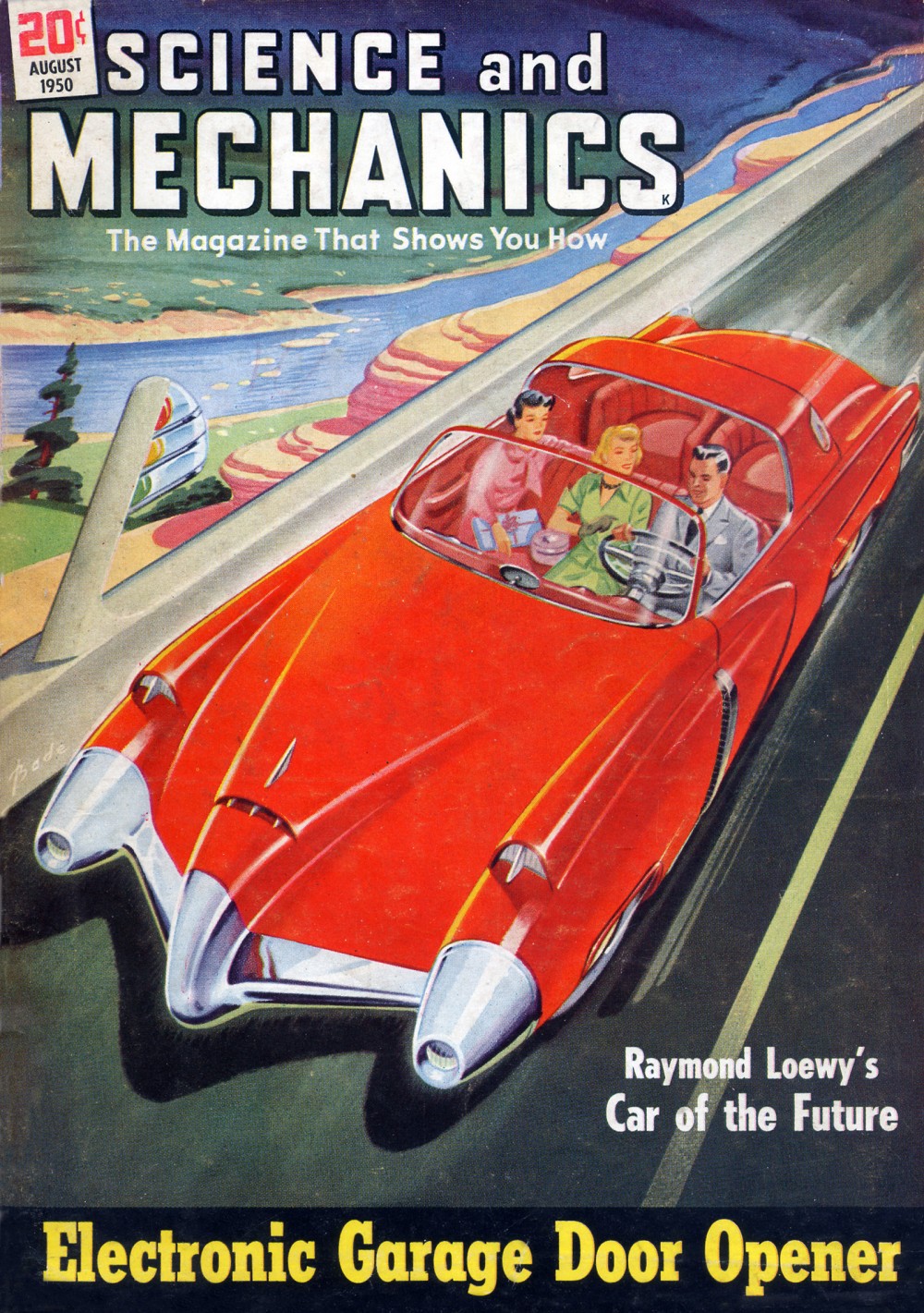 While the car had been around for decades by the 1950s, car culture really took off as a national fad during the decade. Arthur C. Base, August 1950 issue of Science and Mechanics. Wikimedia.

The rise of the suburbs transformed America’s countryside as suburban growth reclaimed millions of acres of rural space, turning agrarian communities into suburban landscapes. As suburban homeowners retreated from the cities into new developments, new developments wrenched more and more agricultural workers off the land, often pushing them into the very cities that suburbanites were fleeing.

The process of suburbanization drove the movement of Americans and turned the wheels of the new consumer economy. Seen from a macroeconomic level, the postwar economic boom turned America into a land of economic abundance. For advantaged buyers, loans had never been easier to attain, consumer goods had never been more accessible, and well-paying jobs had never been more abundant. And yet, beneath the aggregate numbers, patterns of racial disparity, sexual discrimination, and economic inequality persevered and questioned man of the assumptions of an Affluent Society.

In 1939 real estate appraisers arrived in sunny Pasadena, California. Armed with elaborate questionnaires to evaluate the city’s building conditions, the appraisers were well-versed in the policies of the Home Owners Loan Corporation (HOLC). In one neighborhood, the majority of structures were rated in “fair” repair and it was noted that there was a lack of “construction hazards or flood threats.” However, appraisers concluded that the area “is detrimentally affected by 10 owner occupant Negro families.” While “the Negroes are said to be of the better class,” the appraisers concluded, “it seems inevitable that ownership and property values will drift to lower levels.”

While suburbanization and the new consumer economy produced unprecedented wealth and affluence, the fruits of this economic and spatial abundance did not reach all Americans equally. The new economic structures and suburban spaces of the postwar period produced perhaps as much inequality as affluence. Wealth created by the booming economy filtered through social structures with built-in privileges and prejudices. Just when many middle and lower class white American families began their journey of upward mobility by moving to the suburbs with the help of government spending and government programs such as the FHA and the GI Bill, many African Americans and other racial minorities found themselves systematically shut out.

A look at the relationship between federal organizations such as the HOLC and FHA and private banks, lenders, and real estate agents tells the story of standardized policies that produced a segregated housing market. At the core of HOLC appraisal techniques, which private parties also adopted, was the pernicious insistence that mixed-race and minority dominated neighborhoods were credit risks. In partnership with local lenders and real estate agents, HOLC created Residential Security Maps to identify high and low risk-lending areas. People familiar with the local real estate market filled out uniform surveys on each neighborhood. Relying on this information, HOLC assigned every neighborhood a letter grade from A to D and a corresponding color code. The least secure, highest risk neighborhoods for loans received a D grade and the color red. Banks refused to loan money in these “redlined” areas. 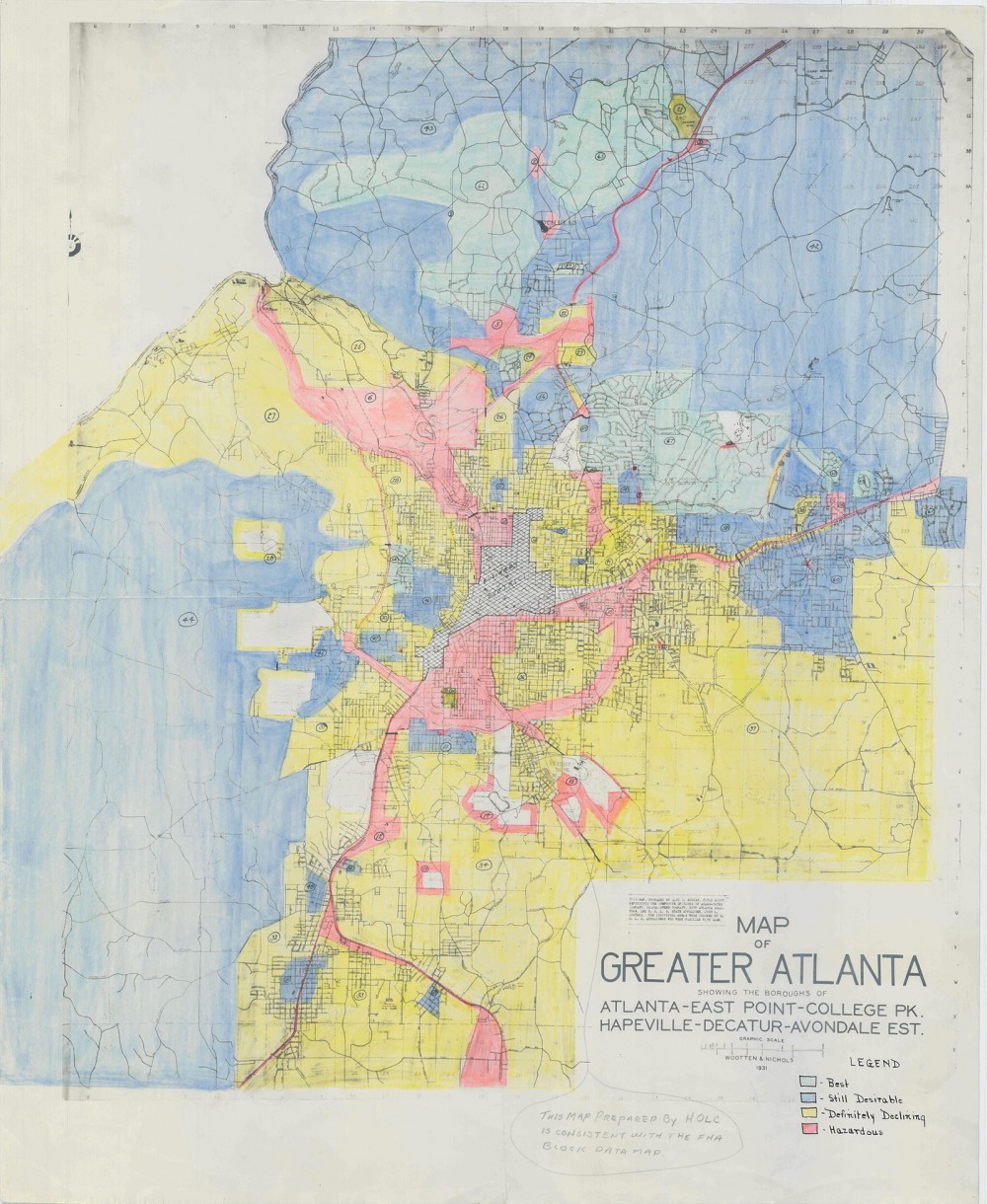 Black communities in cities like Detroit, Chicago, Brooklyn, and Atlanta experienced “redlining,” the process by which banks and other organizations demarcated minority neighborhoods on a map with a red line. Doing so made visible the areas they believed were unfit for their services, denying black residents loans, housing, groceries, and other necessities of modern life. Redlined Map of Greater Atlanta. 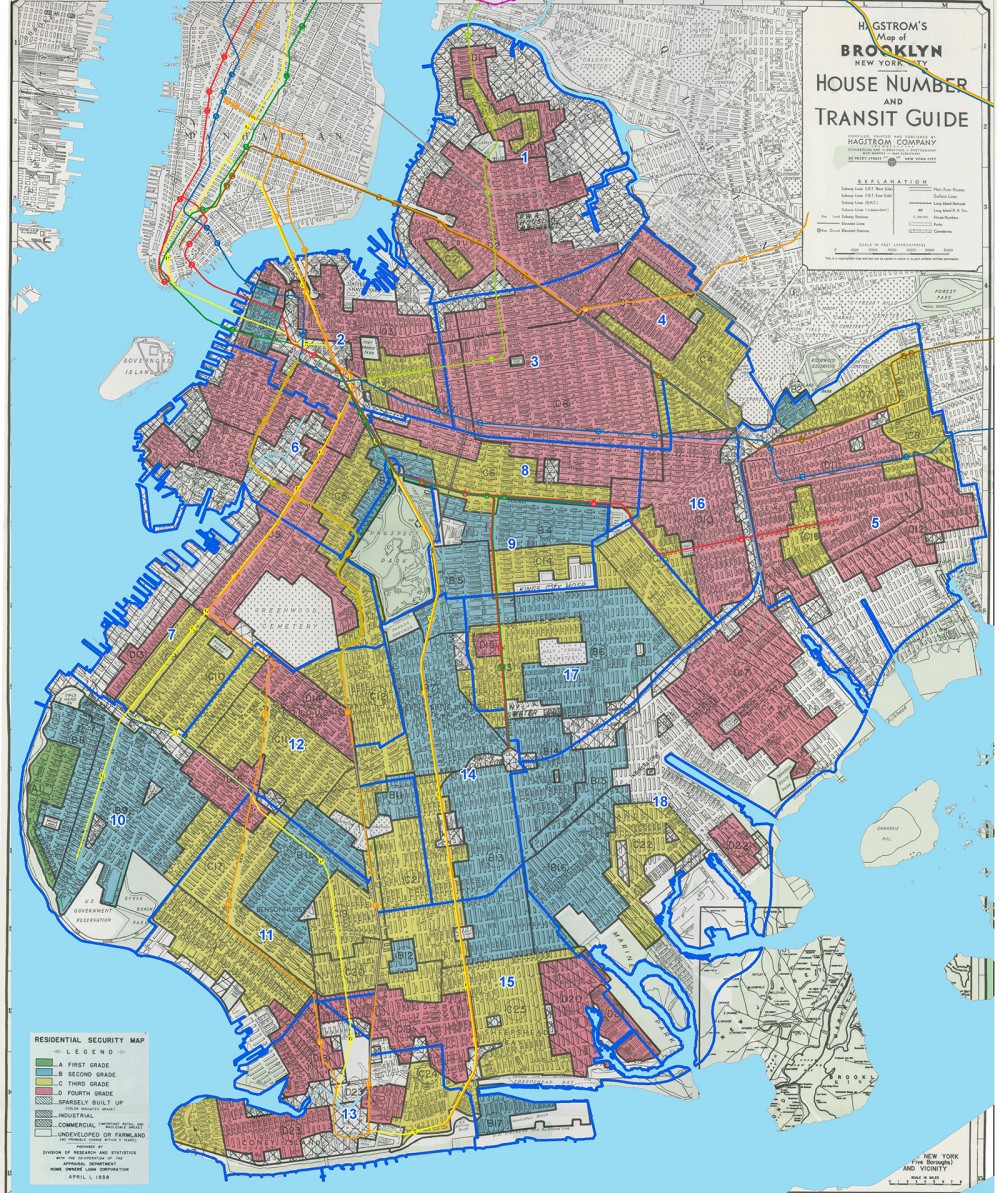 Phrases like “subversive racial elements” and “racial hazards” pervade the redlined area description files of surveyors and HOLC officials. Los Angeles’ Echo Park neighborhood, for instance, had concentrations of Japanese and African Americans and a “sprinkling of Russians and Mexicans.” The HOLC security map and survey noted that the neighborhood’s “adverse racial influences which are noticeably increasing inevitably presage lower values, rentals and a rapid decrease in residential desirability.”

While the HOLC was a fairly short-lived New Deal agency, the influence of its security maps lived on in the Federal Housing Authority (FHA) and the GI Bill dispensing Veteran’s Administration (VA). Both of these government organizations, which set the standard that private lenders followed, refused to back bank mortgages that did not adhere to HOLC’s security maps. On the one hand FHA and VA backed loans were an enormous boon to those who qualified for them. Millions of Americans received mortgages that they otherwise would not have qualified for. But FHA-backed mortgages were not available to all. Racial minorities could not get loans for property improvements in their own neighborhoods—seen as credit risks—and were denied mortgages to purchase property in other areas for fear that their presence would extend the red line into a new community. Levittown, the poster-child of the new suburban America, only allowed whites to purchase homes. Thus HOLC policies and private developers increased home ownership and stability for white Americans while simultaneously creating and enforcing racial segregation.

The exclusionary structures of the postwar economy pushed African Americans and other minorities to protest. Over time the federal government attempted to rectify the racial segregation created, or at least facilitated, in part by its own policies. In 1948, the U.S. Supreme Court case Shelley v. Kraemer struck down explicitly racial neighborhood housing covenants, making it illegal to explicitly consider race when selling a house. It would be years, however, until housing acts passed in the 1960s could provide some federal muscle to complement grassroots attempts to ensure equal access.

During the 1950s and early 1960s many Americans retreated to the suburbs to enjoy the new consumer economy and search for some normalcy and security after the instability of depression and war. But many could not. It was both the limits and opportunities of housing that shaped the contours of postwar American society.