Under the leadership of President Theodore Roosevelt, the United States emerged from the nineteenth century with ambitious designs on global power through military might, territorial expansion, and economic influence. Though the Spanish-American War had begun under the administration of William McKinley, Roosevelt, the hero of San Juan Hill, Assistant Secretary of the Navy, Vice-President, and President, was arguably the most visible and influential proponent of American imperialism at the turn of the century. Roosevelt’s emphasis on developing the American navy, and on Latin America as a key strategic area of U.S. foreign policy, would have long-term consequences.

In return for Roosevelt’s support of the Republican nominee, William McKinley, in the 1896 presidential election, McKinley appointed Roosevelt as Assistant Secretary of the Navy. The head of the department, John Long, had a competent but lackadaisical managerial style that allowed Roosevelt a great deal of freedom that Roosevelt used to network with such luminaries as military theorists Alfred Thayer Mahan and naval officer George Dewey and politicians such as Henry Cabot Lodge and William Howard Taft. During his tenure he oversaw the construction of new battleships, the implementation of new technology, and laid the groundwork for new shipyards, all with the goal of projecting America’s power across the oceans. Roosevelt wanted to expand American influence. For instance, he advocated for the annexation of Hawaii for several reasons: it was within the American sphere of influence, it would deny Japanese expansion and limit potential threats to the West Coast, it had an excellent port for battleships at Pearl Harbor, and it would act as a fueling station on the way to pivotal markets in Asia. 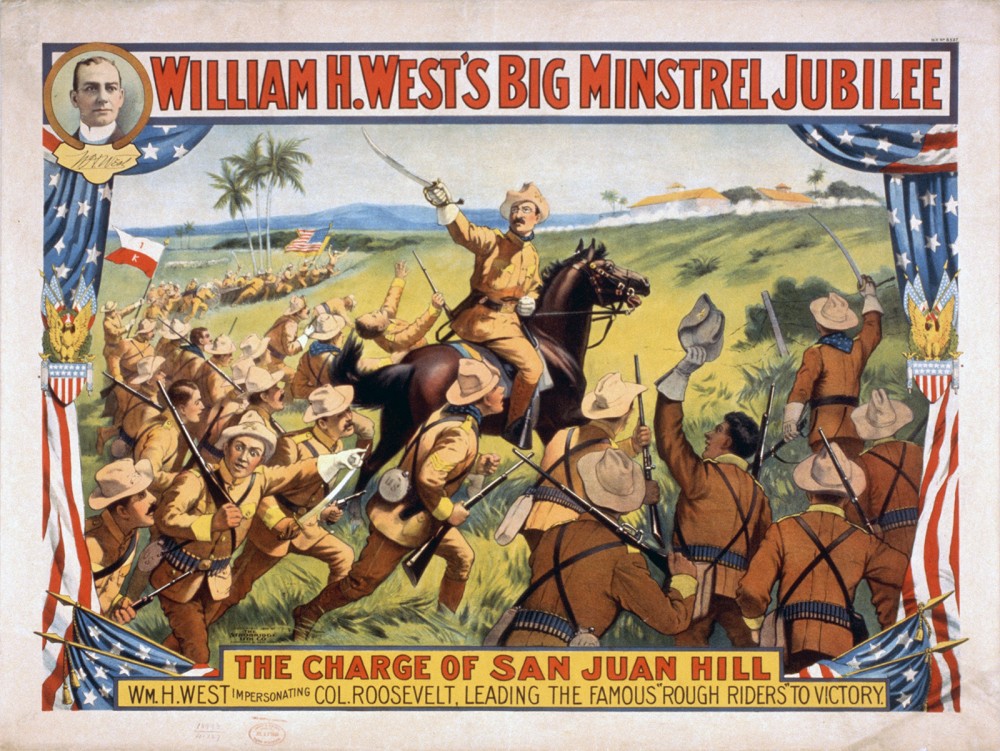 Roosevelt, after winning headlines in the war, ran as Vice President under McKinley and rose to the presidency after McKinley’s assassination by the anarchist Leon Czolgosz in 1901. Among his many interventions in American life, Roosevelt acted with vigor to expand the military, naval power especially, to protect and promote American interests abroad. This included the construction of eleven battleships between 1904 and 1907. Alfred Thayer Mahan’s naval theories, described in his The Influence of Sea Power Upon History, influenced Roosevelt a great deal. In contrast to theories that advocated for commerce raiding, coastal defense and small “brown water” ships, the imperative to control the sea required battleships and a “blue water” navy that could engage and win decisive battles with rival fleets. As president, Roosevelt continued the policies he established as Assistant Naval Secretary and expanded the U.S. fleet. The mission of the Great White Fleet, sixteen all-white battleships that sailed around the word between 1907 and 1909, exemplified America’s new power.

Roosevelt insisted that the “big stick” and the persuasive power of the U.S. military could assure U.S. hegemony over strategically important regions in the Western Hemisphere. The United States used military intervention in various circumstances to further its objectives, but it did not have the ability nor the inclination to militarily impose its will on the entirety of South and Central America. The United States therefore more often used informal methods of empire, such as so-called “dollar diplomacy,” to assert dominance over the hemisphere.

The United States actively intervened again and again in Latin America. Throughout his time in office, Roosevelt exerted U.S. control over Cuba (even after it gained formal independence in 1902) and Puerto Rico, and he deployed naval forces to ensure Panama’s independence from Colombia in 1901 in order to acquire a U.S. Canal Zone. Furthermore, Roosevelt pronounced the “Roosevelt Corollary” to the Monroe Doctrine in 1904, proclaiming U.S. police power in the Caribbean. As articulated by President James Monroe in his annual address to Congress in 1823, the United States would treat any military intervention in Latin America by a European power as a threat to American security. Roosevelt reaffirmed the Monroe Doctrine and expanded it by declaring that the U.S. had the right to preemptive action through intervention in any Latin American nation in order to correct administrative and fiscal deficiencies.

Roosevelt’s policy justified numerous and repeated police actions in “dysfunctional” Caribbean and Latin American countries by U.S. marines and naval forces and enabled the founding of the naval base at Guantanamo Bay, Cuba. This approach is sometimes referred to as “gunboat diplomacy,” wherein naval forces and marines land in a national capital to protect American and Western personnel, temporarily seize control of the government, and dictate policies friendly to American business, such as the repayment of foreign loans. For example, in 1905 Roosevelt sent the marines to occupy the Dominican Republic and established financial supervision over the Dominican government. Imperialists often framed such actions as almost humanitarian. They celebrated white Anglo-Saxon societies such as found in the United States and the British Empire as advanced practitioners of nation-building and civilization, helping to uplift debtor nations in Latin America that lacked the manly qualities of discipline and self-control. Roosevelt, for instance, preached that it was the “manly duty” of the United States to exercise an international police power in the Caribbean and to spread the benefits of Anglo-Saxon civilization to inferior states populated by inferior peoples. The president’s language, for instance, contrasted debtor nation’s “impotence” with the United States’ civilizing influence, belying new ideas that associated self-restraint and social stability with Anglo-Saxon manliness.

Dollar diplomacy offered a less costly method of empire and avoided the troubles of military occupation. Washington worked with bankers to provide loans to Latin American nations in exchange for some level of control over their national fiscal affairs. Roosevelt first implemented dollar diplomacy on a vast scale, while Presidents Taft and Wilson continued the practice in various forms during their own administrations. All confronted instability in Latin America. Rising debts to European and American bankers allowed for the inroads of modern life but destabilized much of the region. Bankers, beginning with financial houses in London and New York, saw Latin America as prime opportunities for investment. Lenders took advantage of the region’s newly formed governments’ need for cash and exacted punishing interest rates on massive loans, which were then sold off in pieces on the secondary bond market. American economic interests were now closely aligned with the region, but also further undermined by the chronic instability of the region’s newly formed governments, which were often plagued by mismanagement, civil wars, and military coups in the decades following their independence. Turnover in regimes interfered with the repayment of loans, as new governments would often repudiate the national debt or force a renegotiation with suddenly powerless lenders.

Creditors could not force settlements of loans until they successfully lobbied their own governments to get involved and forcibly collect debts. The Roosevelt administration did not want to deny the Europeans’ rightful demands of repayment of debt, but it also did not want to encourage European policies of conquest in the hemisphere as part of that debt collection. U.S. policy makers and military strategists within the Roosevelt administration determined that this European practice of military intervention posed a serious threat to American interests in the region. Roosevelt reasoned that the U.S. must create and maintain fiscal and political stability within strategically important nations in Latin America, particularly those affecting routes to and from the proposed Panama Canal. As a result, U.S. policy makers considered intervention in places like Cuba and the Dominican Republic a necessity to insure security around the region.

The Monroe Doctrine provided the Roosevelt administration with a diplomatic and international legal tradition through which it could assert a U.S. right and obligation to intervene in the hemisphere. The Roosevelt Corollary to the Monroe Doctrine asserted that the United States wished to promote stable, prosperous states in Latin America that could live up to their political and financial obligations. Roosevelt declared that “wrongdoing, or an impotence which results in a general loosening of the ties of civilized society, may finally require intervention by some civilized nation, and in the Western Hemisphere the United States cannot ignore this duty.” President Monroe declared what Europeans could not do in the Western Hemisphere; Roosevelt inverted his doctrine to legitimize direct U.S. intervention in the region.

Though aggressive and bellicose, Roosevelt did not necessarily advocate expansion by military force. In fact, the president insisted that in dealings with the Latin American nations, he did not seek national glory or expansion of territory and believed that war or intervention should be a last resort when resolving conflicts with problematic governments. According to Roosevelt, such actions were necessary to maintain “order and civilization.” Then again, Roosevelt certainly believed in using military power to protect national interests and spheres of influence when absolutely necessary. He also believed that American sphere included not only Hawaii and the Caribbean, but also much of the Pacific. When Japanese victories over Russia threatened the regional balance of power he sponsored peace talks between Russian and Japanese leaders, earning him a Nobel Peace Prize in 1906.