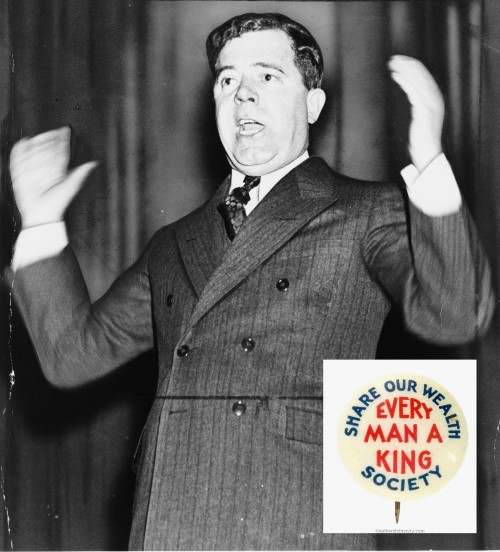 Huey Long was a dynamic, indomitable force (with a wild speech-giving style, seen in the photograph) who campaigned tirelessly for the common man, demanding that Americans “Share Our Wealth.” Photograph of Huey P. Long, c. 1933-35. Wikimedia.

Despite the unprecedented actions taken in his first year in office, Roosevelt’s initial relief programs could often be quite conservative. He had usually been careful to work within the bounds of presidential authority and congressional cooperation. And, unlike Europe, where several nations had turned towards state-run economies, and even fascism and socialism, Roosevelt’s New Deal demonstrated a clear reluctance to radically tinker with the nation’s foundational economic and social structures. Many high-profile critics attacked Roosevelt for not going far enough, and, beginning in 1934, Roosevelt and his advisors were forced to respond.

Senator Huey Long, a flamboyant Democrat from Louisiana, was perhaps the most important “voice of protest.” Long’s populist rhetoric appealed those who saw deeply rooted but easily addressed injustice in the nation’s economic system. Long proposed a “Share Our Wealth” program in which the federal government would confiscate the assets of the extremely wealthy and redistribute them to the less well-off through guaranteed minimum incomes. “How many men ever went to a barbecue and would let one man take off the table what’s intended for nine-tenths of the people to eat?” he asked. Over 27,000 “Share the Wealth” clubs sprang up across the nation as Long traveled the country explaining his program to crowds of impoverished and unemployed Americans. Long envisioned the movement as a stepping stone to the presidency, but his crusade ended in late 1935 when he was assassinated on the floor of the Louisiana state capitol. Even in death, however, Long convinced Roosevelt to more stridently attack the Depression and American inequality.

But Huey Long was not alone in his critique of Roosevelt. Francis Townsend, a former doctor and public health official from California, promoted a plan for old age pensions which, he argued, would provide economic security for the elderly (who disproportionately suffered poverty) and encourage recovery by allowing older workers to retire from the work force. Reverend Charles Coughlin, meanwhile, a priest and radio personality from the suburbs of Detroit, Michigan, gained a following by making vitriolic, anti-Semitic attacks on Roosevelt for cooperating with banks and financiers and proposing a new system of “social justice” through a more state-driven economy instead. Like Long, both Townsend and Coughlin built substantial public followings.

If many Americans urged Roosevelt to go further in addressing the economic crisis, the president faced even greater opposition from conservative politicians and business leaders. By late 1934, growing complaints from business-friendly Republicans of Roosevelt’s willingness to regulate industry and use federal spending for public works and employment programs. In the South, Democrats who had originally supported the president grew increasingly hostile towards programs that challenged the region’s political, economic, and social status quo. Yet the greatest opposition came from the Supreme Court, a conservative filled with appointments made from the long years of Republican presidents.

By early 1935 the Court was reviewing programs of the New Deal. On May 27, a day Roosevelt’s supporters called “Black Monday,” the justices struck down one of the president’s signature reforms: in a case revolving around poultry processing, the Court unanimously declared the NRA unconstitutional. In early 1936, the AAA fell.