After the assassination of Archduke Ferdinand and Grand Duchess Sophie, Austria secured the promise of aid from its German ally and issued a list of ten ultimatums to Serbia. On July 28, 1914, Austria declared war on Serbia for failure to meet all of the demands. Russia, determined to protect Serbia, began to mobilize its armed forces. On August 1, 1914, Germany declared war on Russia to protect Austria after warnings directed at Czar Nicholas II failed to stop Russian preparations for war.

In spite of the central European focus of the initial crises, the first blow was struck against neutral Belgium in northwestern Europe. Germany made plans to deal with the French and Russian threats by taking advantage of the sluggish Russian mobilization to focus the mission of the Germany army on France. Similar to the military operations of 1871, to enter France quickly German military leaders activated the Schlieffen Plan that directed the placement shift of German armies by rapid rail transport. The clever strategy detered and confused Russian forces and ultimately led to a victory march over Belgium and into France.

Belgium fell victim early to invading German forces. Germany wanted to avoid the obvious avenue of advance across the French-German border and encounter the French army units stationed there. German army commanders ordered a wide sweep around the French border forces that led straight to Belgium. However, this violation of Belgian neutrality also ensured that Great Britain entered the war against Germany. On August 4, 1914, Great Britain declared war on Germany for failure to respect Belgium as a neutral nation. 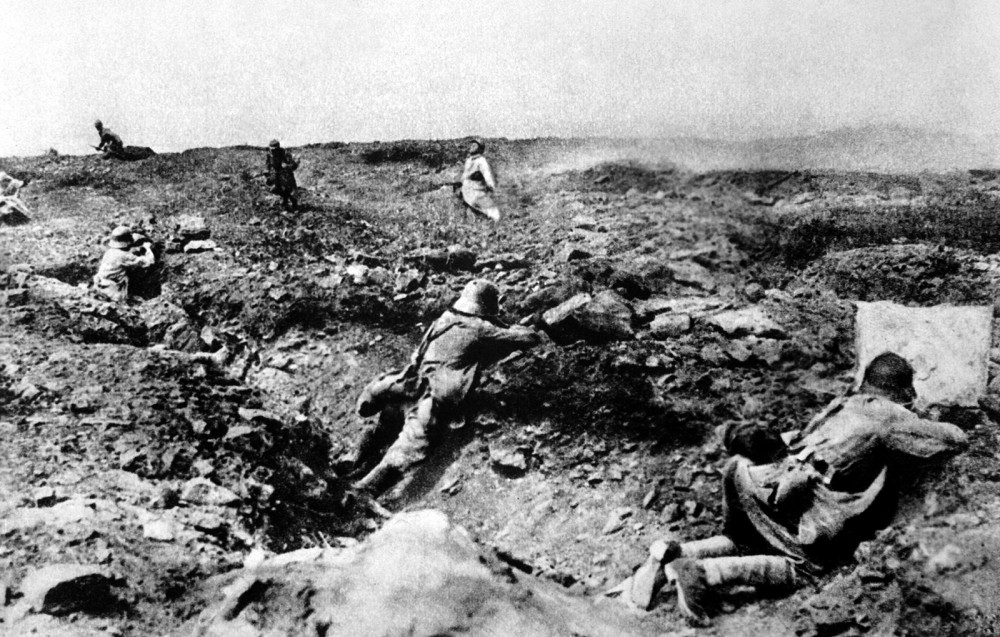 In 1915, the European war had developed into a series of bloody trench stalemates that continued through the following year. Offensives, largely carried out by British and French armies, achieved nothing but huge numbers of casualties. Peripheral campaigns against the Ottoman Empire in Turkey at Gallipoli, throughout the Middle East, and in various parts of Africa were either unsuccessful or had no real bearing on the European contest for victory. The third year of the war proposed promises of great German successes in eastern Europe after the regime of Czar Nicholas II collapsed in Russia in March 1917. At about the same time, the German general staff demanded the reimposition of unrestricted submarine warfare to deprive the Allies of replenishment supplies from the United States.

The Germans realized that submarine warfare would likely bring intervention on behalf of the United States. However, the Germans also believed the European war would be over before American soldiers could arrive in sufficient numbers to alter the balance of power. A German diplomat, Arthur Zimmermann, planned to complicate the potential American intervention. He offered support to the Mexican government via a desperate bid to regain Texas, New Mexico, and Arizona. Mexican national leaders declined the offer, but the revelation of the Zimmermann Telegram helped to usher the United States into the war.