As native peoples were pushed out, American settlers poured in. Aside from agriculture and the extraction of natural resources—such as timber and precious metals—two major industries fueled the new western economy: ranching and railroads. Both developed in connection with each other and both shaped the collective American memory of the post–Civil War “Wild West.”

As one booster put it, “the West is purely a railroad enterprise.” No economic enterprise rivalled the railroads in scale, scope, or sheer impact. No other businesses had attracted such enormous sums of capital, and no other ventures ever received such lavish government subsidies (business historian Alfred Chandler called the railroads the “first modern business enterprise”). By “annihilating time and space,” by connecting the vastness of the continent, the railroads transformed the United States and they made the American West. 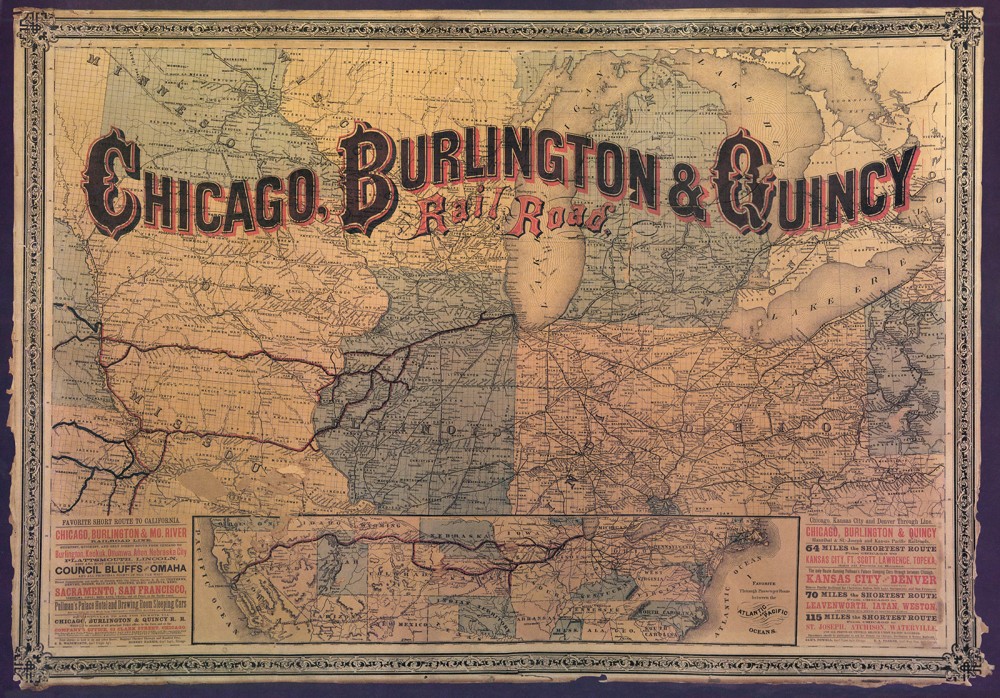 Railroads made the settlement and growth of the West possible. By the late nineteenth century, maps of the mid-West like this one were filled with advertisements of how quickly a traveler could get nearly anywhere in the country. Map. Environment and Society.

No railroad enterprise so captured the American imagination—or federal support—as the transcontinental railroad. The transcontinental railroad crossed western plains and mountains and linked the West Coast with the rail networks of the eastern United States. Constructed from the west by the Central Pacific and from the east by the Union Pacific, the two roads were linked in Utah in 1869 to great national fanfare. But such a herculean task was not easy, and national legislators threw enormous subsidies at railroad companies, a part of the Republican Party platform since 1856. The 1862 Pacific Railroad Act gave bonds of between $16,000 and $48,000 for each mile of construction and provided vast land grants to railroad companies. Between 1850 and 1871 alone, railroad companies received more than 175,000,000 acres of public land, an area larger than the state of Texas. Investors reaped enormous profits. As one congressional opponent put it in the 1870s, “If there be profit, the corporations may take it; if there be loss, the Government must bear it.”

If railroads attracted unparalleled subsidies and investments, they also created enormous labor demands. By 1880, approximately 400,000 men—or nearly 2.5% of the nation’s entire workforce—labored in the railroad industry. Much of the work was dangerous and low-paying and companies relied heavily on immigrant labor to build tracks. Companies employed Irish workers in the early-nineteenth century and Chinese workers in the late-nineteenth. By 1880, over 200,000 Chinese migrants lived in the United States. Once the rails were laid, companies still needed a large workforce to keep the trains running. Much railroad work was dangerous, but perhaps the most hazardous work was done by brakeman. Before the advent of automatic braking, an engineer would blow the “down brake” whistle and brakemen would scramble to the top of the moving train, regardless of the weather conditions, and run from car to car manually turning brakes. Speed was necessary, and any slip could be fatal. Brakemen were also responsible for “coupling” the cars, attaching them together with a large pin. It was easy to lose a hand or finger and even a slight mistake could cause cars to collide.

The railroads boomed. In 1850, there were 9,000 miles of railroads in the United States. In 1900 there were 190,000, including several transcontinental lines. To manage these vast networks of freight and passenger lines, companies converged rails at hub cities. Of all the Midwestern and Western cities that blossomed from the bridging of western resources and eastern capital in the late nineteenth century, Chicago was the most spectacular. It grew from 200 inhabitants in 1833 to over a million by 1890. By 1893 it and the region from which it drew were completely transformed. The World’s Columbian Exposition that year trumpeted the city’s progress, and broader technological progress, with typical Gilded Age ostentation. A huge, gleaming (but temporary) “White City” was built in neoclassical style to house all the features of the fair and cater to the needs of the visitors who arrived from all over the world. Highlighted in the title of this world’s fair were the changes that had overtaken North America since Columbus made landfall four centuries earlier. Chicago became the most important western hub, and served as the gateway between the farm and ranch country of the Great Plains and eastern markets. Railroads brought cattle from Texas to Chicago for slaughter, where they were then processed into packaged meats and shipped by refrigerated rail to New York City and other eastern cities. Such hubs became the central nodes in a rapid-transit economy that increasingly spread across the entire continent linking goods and people together in a new national network.

It was this national network that created the fabled cattle drives of the 1860s and 1870s. The first cattle drives across the central Plains began soon after the Civil War. Railroads created the market for ranching, and because for the few years after the war that railroads connected eastern markets with important market hubs such as Chicago, but had yet to reach Texas ranchlands, ranchers began driving cattle north, out of the Lone Star state, to major railroad terminuses in Kansas, Missouri, and Nebraska. Ranchers used well-worn trails, such as the Chisholm Trail, for drives, but conflicts arose with Native Americans in the Indian Territory and farmers in Kansas who disliked the intrusion of large and environmentally destructive herds onto their own hunting, ranching, and farming lands. Other trails, such as the Western Trail, the Goodnight-Loving Trail, and the Shawnee Trail, were therefore blazed. 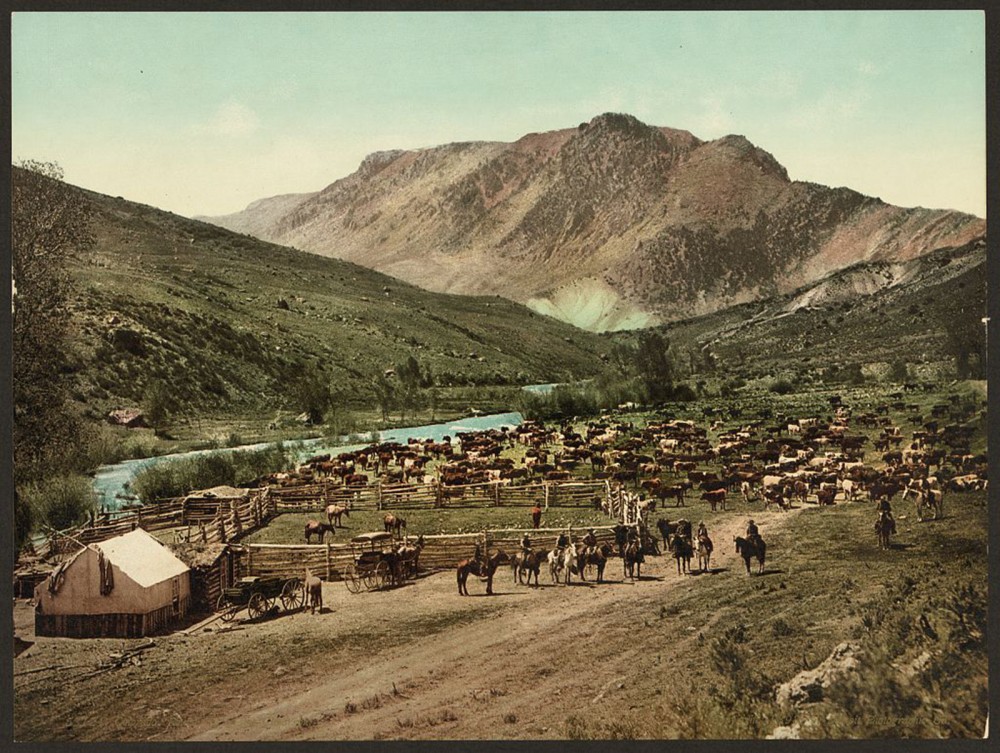 This photochrom print (a new technology in the late nineteenth century that colorized images from a black-and-white negative) depicts a cattle round up in Cimarron, a crossroads of the late-nineteenth-century cattle drives. Detroit Photographic Co., “Colorado. ‘Round up’ on the Cimarron,” c. 1898. Library of Congress.

Cattle drives were difficult tasks for the motley crews of men who managed the herds. Historians struggle to estimate the number of men who worked as cowboys in the late nineteenth century, but counts range from 12,000 to as many as 40,000. Most were young. Perhaps a fourth were African American, and more were likely Mexican or Mexican American. (The American cowboy was an evolution of the Spanish (and later Mexican) vaquero: cowboys adopted Mexican practices, gear, and terms, such as “rodeo,” “bronco,” and “lasso”) There are at least sixteen verifiable accounts of women participating in the drives. Some, like Molly Dyer Goodnight, were known to have accompanied their husbands. Others, like Lizzie Johnson Williams, helped drive their own herds. Williams made at least three known trips with her herds up the Chisholm Trail. Most, though, were young men, many hoping one day to become ranch owners themselves. But it was tough work. Cowboys received low wages, long hours, and uneven work, they faced extremes of heat, cold, and sometimes bouts of intense blowing dust, and they subsisted on limited diets with irregular supplies. Fluctuations in the cattle market made employment insecure and wages were almost always abysmally low. Beginners could expect to earn around $20-25 per month, and those with years of experience might earn $40-45. Trail bosses could sometimes earn over $50 per month. 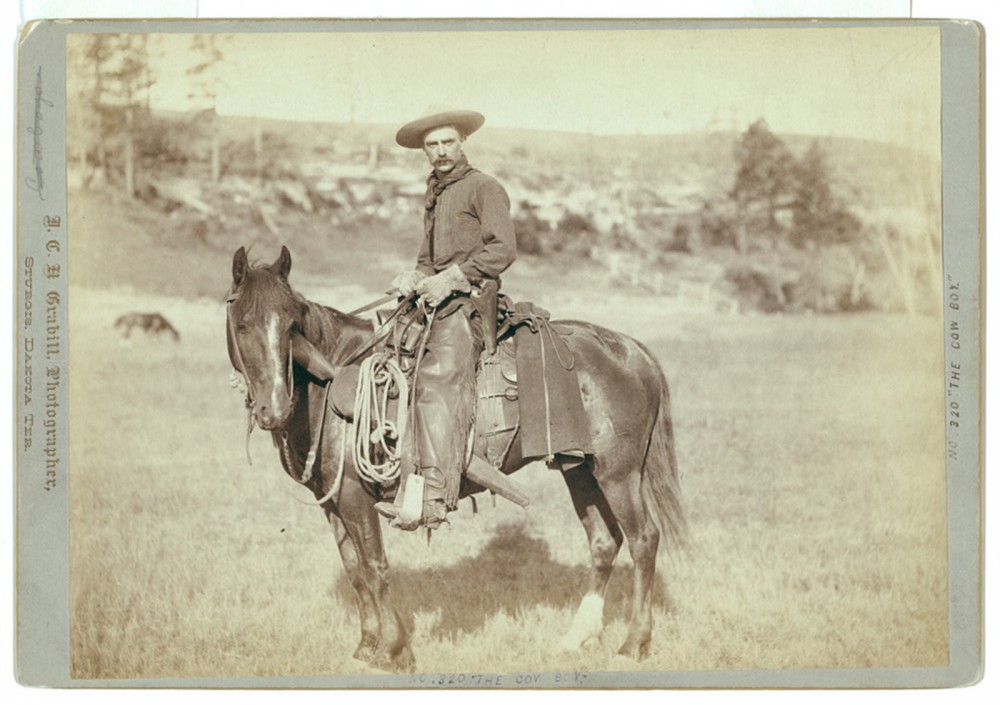 Cowboys like the one pictured here worked the drives that supplied Chicago and other mid-western cities with the necessary cattle to supply and help grow the meat-packing industry. Their work was obsolete by the turn of the century, yet their image lived on through vaudeville shows and films that romanticized life in the West. John C.H. Grabill, “The Cow Boy,” c. 1888. Library of Congress.

But if workers of cattle received low wages, owners and investors could receive riches. At the end of the Civil War, a $4 steer in Texas could fetch $40 in Kansas. Prices began equalizing, but large profits could still be made. And yet, by the 1880s, the great cattle drives were largely done. The railroads had created them, and the railroads had ended them: railroad lines pushed into Texas and made the great drives obsolete. But ranching still brought profits and the Plains were better suited for grazing than for agriculture and western ranchers continued supplying beef for national markets.

Ranching was just one of many western industries that depended upon the railroads. By linking the Plains with national markets and moving millions, the railroads made the modern American West.