William Jennings Bryan and the Politics of Gold 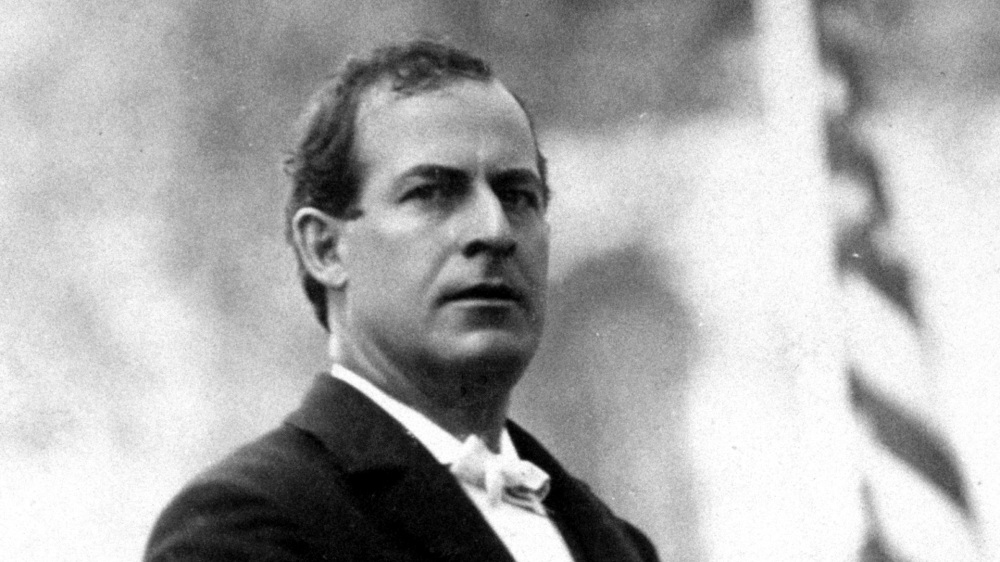 William Jennings Bryan (March 19, 1860 – July 26, 1925) accomplished many different things in his life: he was a skilled orator, a Nebraska Congressman, a three-time presidential candidate, the U.S. Secretary of the State under Woodrow Wilson, and a lawyer who supported prohibition and opposed Darwinism (most notably in the 1925 Scopes “Monkey” Trial). In terms of his political career, he won national renown for his attack on the gold standard and his tireless promotion of free silver and policies for the benefit of the average American. Although Bryan was unsuccessful in winning the presidency, he forever altered the course of American political history. 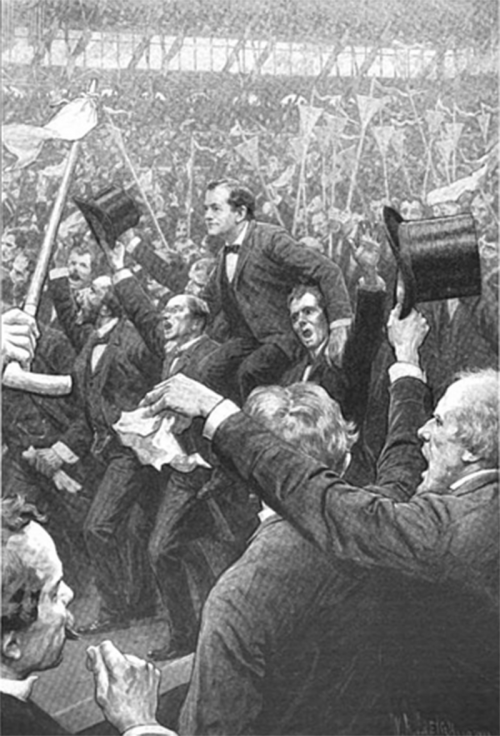 With the country in financial chaos after the Panic of 1893, William Jennings Bryan arose as a political star when he advocated bimetallism – the acceptance of both gold and silver as legal tender. Bryan’s Cross of Gold speech at 1896 Democratic National Convention, which he concluded with the fiery statement that “you shall not crucify mankind upon a cross of gold,” secured him the Democratic nomination for President in 1896. Artist’s conception of William Jennings Bryan after the Cross of Gold speech, 1900. Wikimedia.

Bryan was born in Salem, Illinois, in 1860 to a devout family with a strong passion for law, politics, and public speaking. At twenty, he attended Union Law College in Chicago and passed the bar shortly thereafter. After his marriage to Mary Baird in Illinois, Bryan and his young family relocated to Nebraska, where he won a reputation among the state’s Democratic Party leaders as an extraordinary orator. Bryan would later win recognition as one of the greatest speakers in American history.

When economic depressions struck the Midwest in the late 1880s, despairing farmers faced low crop prices and found few politicians on their side. While many rallied to the Populist cause, Bryan worked from within the Democratic Party, using the strength of his oratory. After delivering one speech, he told his wife, “Last night I found that I had a power over the audience. I could move them as I chose. I have more than usual power as a speaker… God grant that I may use it wisely.” He soon won election to the Nebraska House of Representatives, where he served for two terms. Although he lost a bid to join the Nebraska Senate, Bryan refocused on a much higher political position: the presidency of the United States. There, he believed he could change the country by defending farmers and urban laborers against the corruptions of big business.

In 1895-1896, Bryan launched a national speaking tour in which he promoted the free coinage of silver. He believed that “bimetallism,” by inflating American currency, could alleviate farmers’ debts. In contrast, Republicans championed the gold standard and a flat money supply. American monetary standards became a leading campaign issue. Then, in July 1896, the Democratic Party’s national convention met to settle upon a choice for their president nomination in the upcoming election. The party platform asserted that the gold standard was “not only un-American but anti-American.” Bryan spoke last at the convention. He astounded his listeners. At the conclusion of his stirring speech, he declared, “Having behind us the commercial interests and the laboring interests and all the toiling masses, we shall answer their demands for a gold standard by saying to them, you shall not press down upon the brow of labor this crown of thorns. You shall not crucify mankind upon a cross of gold.” After a few seconds of stunned silence, the convention went wild. Some wept, many shouted, and the band began to play “For He’s a Jolly Good Fellow.” Bryan received the 1896 Democratic presidential nomination.

The Republicans ran William McKinley, an economic conservative that championed business interests and the gold standard. Bryan crisscrossed the country spreading the silver gospel. The election drew enormous attention and much emotion. According to Bryan’s wife, he received two thousand letters of support every day that year, an enormous amount for any politician, let alone one not currently in office. Yet Bryan could not defeat the McKinley. The pro-business Republicans outspent Bryan’s campaign fivefold. A notably high 79.3% of eligible American voters cast ballots and turnout averaged 90% in areas supportive of Bryan, but Republicans swayed the population-dense Northeast and Great Lakes region and stymied the Democrats. In early 1900, Congress passed the Gold Standard Act, which put the country on the gold standard, effectively ending the debate over the nation’s monetary policy. Bryan sought the presidency again in 1900 but was again defeated, as he would be yet again in 1908. 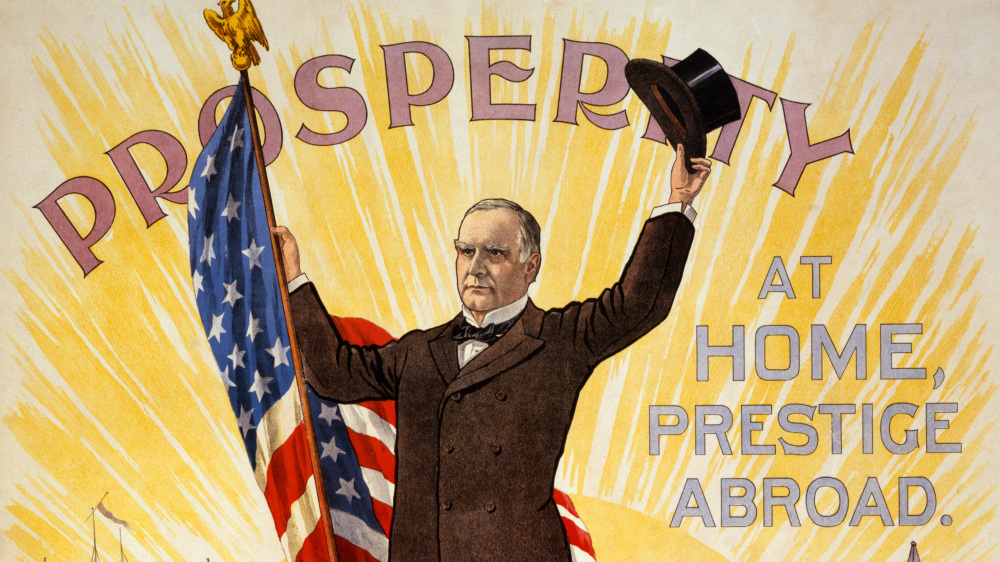 Conservative William McKinley promised prosperity to ordinary Americans through his “sound money” initiative, a policy he ran on during his election campaigns in 1896 and again in 1900. This election poster touts McKinley’s gold standard policy as bringing “Prosperity at Home, Prestige Abroad.” “Prosperity at home, prestige abroad,” [between 1895 and 1900]. Library of Congress.

Bryan was among the most influential losers in American political history. When the agrarian wing of the Democratic Party nominated the Nebraska congressman in 1896, Bryan’s fiery condemnation of northeastern financial interests and his impassioned calls for “free and unlimited coinage of silver” coopted popular Populist issues. The Democrats stood ready to siphon off a large proportion the Populist’s political support. When the People’s Party held its own convention two weeks later, the party’s moderate wing, in a fiercely-contested move, overrode the objections of more ideologically pure Populists and nominated Bryan as the Populist candidate as well. This strategy of temporary “fusion” movement fatally fractured the movement and the party. Populist energy moved from the radical-yet-still-weak People’s Party to the more moderate-yet-powerful Democratic Party. And although at first glance the Populist movement appears to have been a failure—its minor electoral gains were short-lived, it did little to dislodge the entrenched two-party system, and the Populist dream of a cooperative commonwealth never took shape—yet, in terms of lasting impact, the Populist Party proved the most significant third-party movement in American history. The agrarian revolt would establish the roots of later reform and the majority of policies outlined within the Omaha Platform would eventually be put into law over the following two decades under the management of middle-class reformers. In large measure, the Populist vision laid the intellectual groundwork for the coming progressive movement. 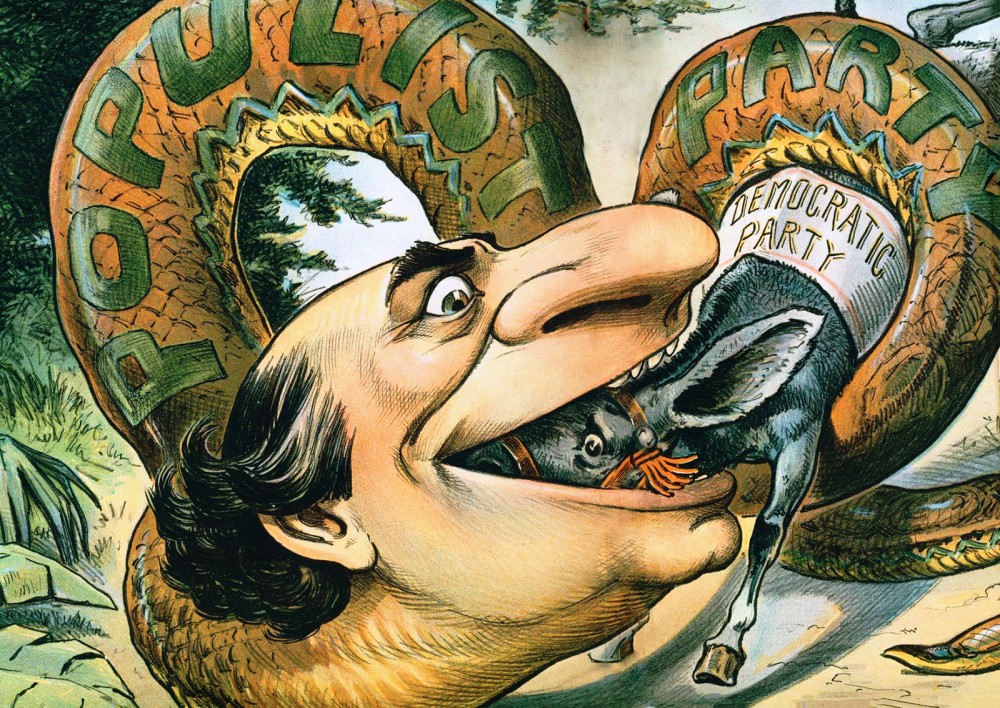 William Jennings Bryan espoused Populists politics while working within the two-party system as a Democrat. Republicans characterized this as a kind hijacking by Bryan, arguing that the Democratic Party was now a party of a radical faction of Populists. The pro-Republican magazine Judge rendered this perspective in a political cartoon showing Bryan (representing Populism writ large) as huge serpent swallowing a bucking mule (representing the Democratic party). Political Cartoon, Judge, 1896. Wikimedia.