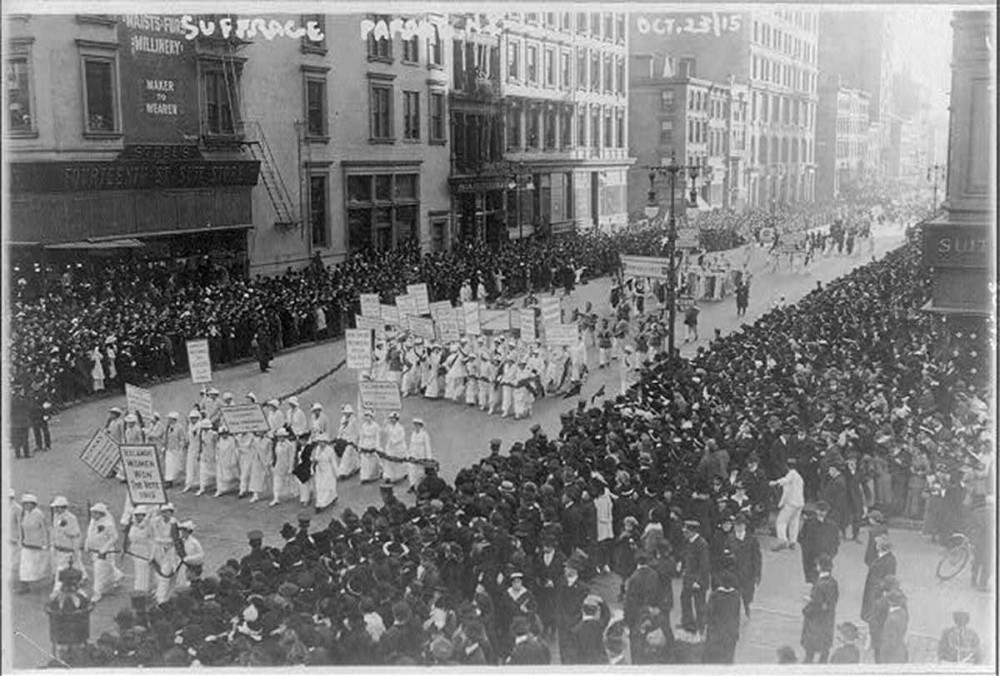 Suffragettes campaigned tirelessly for the vote in the first two decades of the twentieth century, taking to the streets in public displays like this 1915 pre-election parade in New York City. During this one event, 20,000 women defied the gender norms that tried to relegate them to the private sphere and deny them the vote. Photograph, 1915. Wikimedia.

Reform opened new possibilities for women’s activism in American public life and gave new impetus to the long campaign for women’s suffrage. Much energy for women’s work came from female “clubs,” social organizations devoted to various purposes. Some focused on intellectual development, others emphasized philanthropic activities. Increasingly, these organizations looked outwards, to their communities, and to the place of women in the larger political sphere.

Women’s clubs flourished in the late-nineteenth and early-twentieth centuries. In 1890s women formed national women’s club federations. Particularly significant in campaigns for suffrage and women’s rights were the General Federation of Women’s Clubs (formed in New York City in 1890) and the National Association of Colored Women (organized in Washington, D.C., in 1896), both of which were dominated by upper-middle-class, educated, northern women. Few of these organizations were bi-racial, a legacy of the sometimes uneasy mid-nineteenth-century relationship between socially active African Americans and white women. Rising American prejudice led many white female activists to ban inclusion of their African American sisters. The segregation of black women into distinct clubs nonetheless still produced vibrant organizations that could promise racial uplift and civil rights for all blacks, as well as equal rights for women.

Other women worked through churches and moral reform organizations to clean up American life. And still others worked as moral vigilantes. The fearsome Carrie A. Nation, an imposing woman who believed she worked God’s will, won headlines for destroying saloons. In Wichita, Kansas, on December 27, 1900, Nation took a hatchet and broke bottles and bars at the luxurious Carey Hotel. Arrested and charged with $3000 in damages, Nation spent a month in jail before the county dismissed the charges on account of “a delusion to such an extent as to be practically irresponsible.” But Nation’s “hatchetation” drew national attention. Describing herself as “a bulldog running along at the feet of Jesus, barking at what He doesn’t like,” she continued her assaults, and days later smashed two more Wichita bars.

Few women followed in Nation’s footsteps, and many more worked within more reputable organizations. Nation, for instance, had founded a chapter of the Woman’s Christian Temperance Union, (WCTU) but the organizations’ leaders described her as “unwomanly and unchristian.” The WCTU was founded in 1874 as a modest temperance organization devoted to combatting the evils of drunkenness. But then, from 1879 to 1898, Frances Willard invigorated the organization by transforming it into a national political organization, embracing a “do everything” policy that adopted any and all reasonable reforms that would improve social welfare and advance women’s rights. Temperance, and then the full prohibition of alcohol, however, always loomed large.

Many American reformers associated alcohol with nearly every social ill. Alcohol was blamed for domestic abuse, poverty, crime, and disease. The 1912 Anti-Saloon League Yearbook, for instance, presented charts indicating comparable increases in alcohol consumption alongside rising divorce rates. The WCTU called alcohol of being a “home wrecker.” More insidiously, perhaps, reformers also associated alcohol with cities and immigrants, necessarily maligning America’s immigrants, Catholics, and working classes in their crusade against liquor. Still, reformers believed that the abolition of “strong drink” would bring about social progress, would obviate the need for prisons and insane asylums, would save women and children from domestic abuse, and usher in a more just, progressive society.

From the club movement and temperance campaigns emerged powerful, active, female activists. Perhaps no American reformer matched Jane Addams’ in fame, energy, and innovation. Born in Cedarville, Illinois, in 1860, Addams lost her mother by the age of two and lived under the attentive care of her father. At seventeen, she left home to attend Rockford Female Seminary. An idealist, Addams sought the means to make the world a better place. She believed that well-educated women of means, such as herself, lacked practical strategies for engaging everyday reform. After four years at Rockford, Addams embarked upon on a multi-year “grand tour” of Europe. Jane found herself drawn to English settlement houses, a kind of prototype for social work in which philanthropists embedded themselves within communities and offered services to disadvantaged populations. After visiting London’s Toynbee Hall, the first settlement house, in 1887, Addams returned to the US and in 1889 founded Hull House in Chicago with her longtime confidant and companion Ellen Gates Starr.

The Settlement … is an experimental effort to aid in the solution of the social and industrial problems which are engendered by the modern conditions of life in a great city. It insists that these problems are not confined to any one portion of the city. It is an attempt to relieve, at the same time, the overaccumulation at one end of society and the destitution at the other … It must be grounded in a philosophy whose foundation is on the solidarity of the human race, a philosophy which will not waver when the race happens to be represented by a drunken woman or an idiot boy.

Hull House workers provided for their neighbors by running a nursery and a kindergarten, administering classes for parents and clubs for children, and organizing social and cultural events for the community. Florence Kelley stayed at Hull House from 1891 to 1899, taking the settlement house model to New York and founding the Henry Street Settlement there. But Kelley also influenced Addams, convincing her to move into the realm of social reform. Hull House began exposing sweat shop conditions and advocating for worker organization. She called the conditions caused by urban poverty and industrialization a “social crime.” Hull House workers surveyed their community and produced statistics of poverty, disease, and living conditions that proved essential for reformers. Addams began pressuring politicians. Together Kelley and Addams petitioned legislators to pass anti-sweatshop legislation passed that limited the hours of work for women and children to eight per day. Yet Addams was an upper class white Protestant women who had faced limits, like many reformers, in embracing what seemed to them radical policies. While Addams called labor organizing a “social obligation,” she also warned the labor movement against the “constant temptation towards class warfare.” Addams, like many reformers, favored cooperation between rich and poor and bosses and workers, whether cooperation was a realistic possibility or not.

Addams became a kind of celebrity. In 1912, she became the first woman to give a nominating speech at a major party convention when she seconded the nomination of Theodore Roosevelt as the Progressive Party’s candidate for president. Her campaigns for social reform and women’s rights won headlines and her voice became ubiquitous in progressive politics.

Addams’ concerns grew beyond domestic concerns. Beginning with her work in the Anti-Imperialist League during the Spanish-American War Addams increasingly began to see militarism as a drain on resources better spent on social reform. In 1907 she wrote Newer Ideals of Peace, a book that would become for many a philosophical foundation of pacifism. Addams emerged as a prominent opponent of America’s entry into World War I. She received the Nobel Peace Prize in 1931.

It would be suffrage, ultimately, that would mark the full emergence of women in American public life. Generations of women—and, occasionally, men—had pushed for women’s suffrage. Suffragists’ hard work resulted in slow but encouraging steps forward during the last decades of the nineteenth century. Notable victories were won in the West, where suffragists mobilized large numbers of women and male politicians were open to experimental forms of governance. By 1911, six western states had passed suffrage amendments to their constitutions.

Women’s suffrage was typically entwined with a wide range of reform efforts. Many suffragists argued that women’s votes were necessary to clean up politics and combat social evils. By the 1890s, for example, the Women’s Christian Temperance Union, then the largest women’s organization in America, endorsed suffrage. Working-class women organized the Women’s Trade Union League (WTUL) in 1905 and campaigned for the vote alongside the National American Suffrage Association, a leading suffrage organization comprised largely of middle and upper-class women. WTUL members viewed the vote as a way to further their economic interests and to foster a new sense of respect for working-class women. “What the woman who labors wants is the right to live, not simply exist,” said Ruth Schneiderman, a WTUL leader, during a 1912 speech. “The worker must have bread, but she must have roses, too.”

Many suffragists adopted a much crueler message. Some, even outside of the South, argued that white women’s votes were necessary to maintain white supremacy. Many American women found it advantageous to base their arguments for the vote on the necessity of maintaining white supremacy by enfranchising white, upper- and middle-class women. These arguments even stretched into international politics. But whatever the message, the suffrage campaign was winning.

The final push for women’s suffrage came on the eve of World War I. Determined to win the vote; the National American Suffrage Association developed a dual strategy that focused on the passage of state voting rights laws and on the ratification of an amendment to the U.S. Constitution. Meanwhile, a new, more militant, suffrage organization emerged on the scene. Led by Alice Paul, the National Women’s Party took to the streets to demand voting rights, organizing marches and protests that mobilized thousands of women. Beginning in January 1917, National Women’s Party members also began to picket the White House, an action that led to the arrest and imprisonment of over 150 women.

In January 1918, President Woodrow Wilson declared his support for the women’s suffrage amendment and, two years later women’s suffrage became a reality. After the ratification of the Nineteenth Amendment, women from all walks of life mobilized to vote. They were driven by both the promise of change, but also in some cases by their anxieties about the future. Much had changed since their campaign began, the US was now more industrial than not, increasingly more urban than rural. The activism and activities of these new urban denizens also gave rise to a new American culture.