Essay assignments are such high-stakes tasks, that we feel a lot of pressure to do serious work, and perform well, at every stage of the writing process.  Sure, prewriting can be kind of fun, and outlining can get us excited about the possibilities a project can hold.

At the time of starting to write a first draft, however, the pressure starts to mount. Sometimes we can feel locked into the need to get everything perfect, that it can be paralyzing.

The thing to remember is that EVERY first draft is crappy.  Everyone’s. 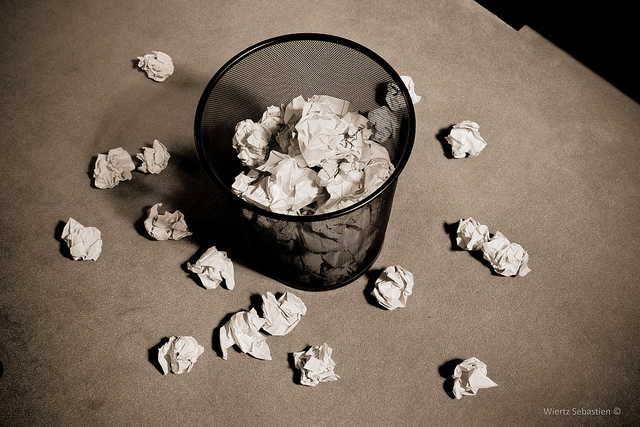 “The first draft of anything is shit.” —Ernest Hemingway

I should be able to stop here, leaving you with Hemingway’s sage and true statement, and go work onto something else, maybe my own shitty first draft of a blog post. But I won’t because I know most of you refuse to accept this truth.

No, instead you think if you beat your head against your desk hard enough and long enough, you will craft some 24k golden prose, words so sweet and deftly written that you’ll bring tears to the eyes of babes.

Well you won’t. So stop it.

Still don’t believe me? Are you saying, “Melissa, how do you know how well I write?” To this, I say, that doesn’t matter. If you can’t learn to write a shitty first draft, getting whatever it is out of your system, then you’re never going to have the energy to keep writing. You’re not going to learn how to take risks, because you’ll never let yourself write anything less than perfect on the first go.

FREAKING STOP IT. Write some garbage. Let it spew forth, and once you’ve finally emptied that stinking pustule, take a step away and come back later. Put on some gloves and dig through the pile you emptied out on those pages, and you’ll begin to find some gems. Use them to write a good second draft, and then repeat until you have an excellent final draft.

If you don’t believe me, then see what Anne Lamott has to say about it. Lamott’s Bird by Bird: Some Instructions on Writing and Life has a chapter titled “Shitty First Drafts.” The book was required reading when I took my short fiction workshop in college, and it’s a great book for all writers.

The crappy first draft can be very liberating.  If it doesn’t have to be good, then we feel a lot more freedom to get started and get it over with.

Trust in the process.  Write crap.  Plenty of time later to refine it.