You learned already about the Ebbinghaus illusion and how it influences a person’s perception of the size of a golf hole. This, and other illusions, do not always work on all people. Psychologists have found that there are cultural influences (amongst other things, like age) that influence whether or not person falls prey to an illusion. Consider the following experiments done by Martin J. Doherty, an English psychologist.

In one study, Doherty presented the Ebbinghaus illusion to children of various ages, and children were asked to identify which center circle appeared bigger. One of the two central circles was always larger, with the difference between the two going from 2% to 18% (in 4% increments). In a control condition, only the central circles were presented—no surrounding context. 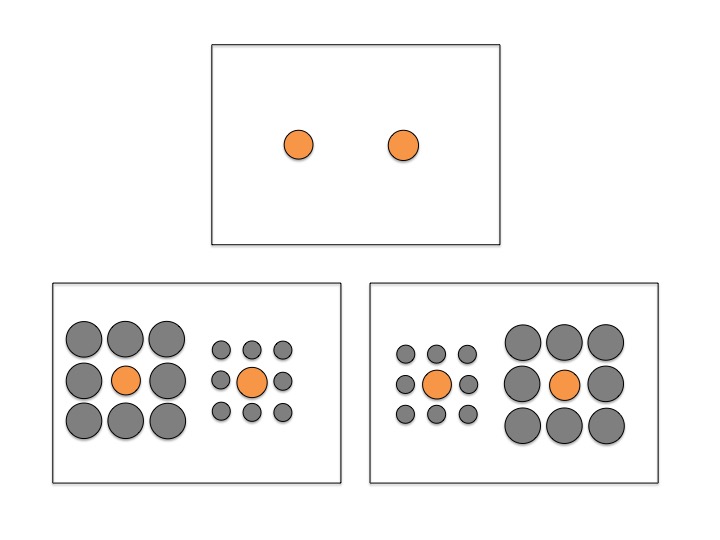 Figure 1. This is an approximation of the conditions shown in the actual experiment, in which the orange circles on the right are 2% larger than the center circles on the left. Those in the control group were shown the top image, with only two circles. In the experimental group, people were shown either the difference-enhancing image (lower left), in which the right circle generally appears larger because of context or the difference-reducing image (lower right), in which the right circle appears smaller because of context.

Doherty’s 2010 study showed that children under 9 or 10 were less prone to the Ebbinghaus illusion—so they actually answered more accurately than adults, even though they were slightly worse than adults on the control stimuli. The prime take-away from the study is that we learn to use contextual information; the Ebbinghaus illusion is not an innate product of our perceptual systems. Obviously, this also suggests that there is an adaptive benefit in using context: perception of relative size is, in adaptive terms, “better than” (or more useful than) absolute perception.

Doherty’s 2008 study showed cross-cultural differences in the Ebbinghaus illusion, using the same method as in the developmental study. The subjects were adults (grad students and researchers) from Japan and UK. They also compared males and females, though this distinction was explicitly confounded with field of study (males all in STEM-related areas and females in social sciences). They were careful not to make naïve sex-difference claims or naïve field-of-study claims—rather they referred to these groups by their joint characteristics (e.g., male mathematical scientists or female social scientists). They found that Japanese subjects were significantly more influenced by context (i.e., more misled by the surrounding circles) than the UK scientists. In both cultures, female social scientists were more influenced by context than male mathematical scientists. Connecting this back to the developmental study mentioned above, this means the Japanese were more “adult-like” than folks from the UK and female social scientists were more “adult-like” than male mathematical scientists.

Notice that this study fits the “learning” model in explaining the Ebbinghaus effect. Cultural differences are generally due to learning, not to different innate cognitive or perceptual systems. We would expect no Japan/UK difference if the Ebbinghaus illusion is produced by innate perceptual systems (i.e., unaffected by learning). For example, you read in the text about how the Müller-Lyer illusion is also a “learned” illusion, as it does not affect those who live in cultures with less-carpentered worlds.

STEP 2: Consider other common illusions, like those shown in the course, or found online through other sources, such as these websites:

Pick an illusion that stands out to you, then use the illusion to write a few paragraphs responding to the following questions. Use your understanding of sensation and perception and psychological research to support and enhance your response.