A seminal paper published in 1943 by psychiatrist Leo Kanner described an unusual neurodevelopmental condition he observed in a group of children. He called this condition early infantile autism, and it was characterized mainly by an inability to form close emotional ties with others, speech and language abnormalities, repetitive behaviors, and an intolerance of minor changes in the environment and in normal routines (Bregman, 2005). What the DSM-5 refers to as autism spectrum disorder today, is a direct extension of Kanner’s work.

Autism spectrum disorder is probably the most misunderstood and puzzling of the neurodevelopmental disorders. Children with this disorder show signs of significant disturbances in three main areas: (a) deficits in social interaction, (b) deficits in communication, and (c) repetitive patterns of behavior or interests. These disturbances appear early in life and cause serious impairments in functioning (APA, 2013). The child with autism spectrum disorder might exhibit deficits in social interaction by not initiating conversations with other children or turning their head away when spoken to. These children do not make eye contact with others and seem to prefer playing alone rather than with others. In a certain sense, it is almost as though these individuals live in a personal and isolated social world others are simply not privy to or able to penetrate. Communication deficits can range from a complete lack of speech, to one word responses (e.g., saying “Yes” or “No” when replying to questions or statements that require additional elaboration), to echoed speech (e.g., parroting what another person says, either immediately or several hours or even days later), to difficulty maintaining a conversation because of an inability to reciprocate others’ comments. These deficits can also include problems in using and understanding nonverbal cues (e.g., facial expressions, gestures, and postures) that facilitate normal communication.

Repetitive patterns of behavior or interests can be exhibited a number of ways. The child might engage in stereotyped, repetitive movements (rocking, head-banging, or repeatedly dropping an object and then picking it up), or she might show great distress at small changes in routine or the environment. For example, the child might throw a temper tantrum if an object is not in its proper place or if a regularly-scheduled activity is rescheduled. In some cases, the person with autism spectrum disorder might show highly restricted and fixated interests that appear to be abnormal in their intensity. For instance, the person might learn and memorize every detail about something even though doing so serves no apparent purpose. Importantly, autism spectrum disorder is not the same thing as intellectual disability, although these two conditions are often comorbid. The DSM-5 specifies that the symptoms of autism spectrum disorder are not caused or explained by intellectual disability.

Autism spectrum disorder is referred to in everyday language as autism; in fact, the disorder was termed “autistic disorder” in earlier editions of the DSM, and its diagnostic criteria were much narrower than those of autism spectrum disorder. The qualifier “spectrum” in autism spectrum disorder is used to indicate that individuals with the disorder can show a range, or spectrum, of symptoms that vary in their magnitude and severity: some severe, others less severe. The previous edition of the DSM included a diagnosis of Asperger’s disorder, generally recognized as a less severe form of autistic disorder; individuals diagnosed with Asperger’s disorder were described as having average or high intelligence and a strong vocabulary, but exhibiting impairments in social interaction and social communication, such as talking only about their special interests (Wing, Gould, & Gillberg, 2011). However, because research has failed to demonstrate that Asperger’s disorder differs qualitatively from autistic disorder, the DSM-5 does not include it, which is prompting concerns among some parents that their children may no longer be eligible for special services (“Asperger’s Syndrome Dropped,” 2012). Some individuals with autism spectrum disorder, particularly those with better language and intellectual skills, can live and work independently as adults. However, most do not because the symptoms remain sufficient to cause serious impairment in many realms of life (APA, 2013).

This video explains some of the early signs of autism.

Current estimates from the Center for Disease Control and Prevention’s Autism and Developmental Disabilities Monitoring Network indicate that 1 in 59 children in the United States has autism spectrum disorder; the disorder is 4 times more common among boys (1 in 38) than in girls (1 in 152) (Baio et al, 2018). Rates of autistic spectrum disorder have increased dramatically since the 1980s. For example, California saw an increase of 273% in reported cases from 1987 through 1998 (Byrd, 2002); between 2000 and 2008, the rate of autism diagnoses in the United States increased 78% (CDC, 2012). Although it is difficult to interpret this increase, it is possible that the rise in prevalence is the result of the broadening of the diagnosis, increased efforts to identify cases in the community, and greater awareness and acceptance of the diagnosis. In addition, mental health professionals are now more knowledgeable about autism spectrum disorder and are better equipped to make the diagnosis, even in subtle cases (Novella, 2008).

Early theories of autism placed the blame squarely on the shoulders of the child’s parents, particularly the mother. Bruno Bettelheim (an Austrian-born American child psychologist who was heavily influenced by Sigmund Freud’s ideas) suggested that a mother’s ambivalent attitudes and her frozen and rigid emotions toward her child were the main causal factors in childhood autism. In what must certainly stand as one of the more controversial assertions in psychology over the last 50 years, he wrote, “I state my belief that the precipitating factor in infantile autism is the parent’s wish that his child should not exist” (Bettelheim, 1967, p. 125). As you might imagine, Bettelheim did not endear himself to a lot of people with this position; incidentally, no scientific evidence exists supporting his claims.

The exact causes of autism spectrum disorder remain unknown despite massive research efforts over the last two decades (Meek, Lemery-Chalfant, Jahromi, & Valiente, 2013). Autism appears to be strongly influenced by genetics, as identical twins show concordance rates of 60%–90%, whereas concordance rates for fraternal twins and siblings are 5%–10% (Autism Genome Project Consortium, 2007). Many different genes and gene mutations have been implicated in autism (Meek et al., 2013). Among the genes involved are those important in the formation of synaptic circuits that facilitate communication between different areas of the brain (Gauthier et al., 2011). A number of environmental factors are also thought to be associated with increased risk for autism spectrum disorder, at least in part, because they contribute to new mutations. These factors include exposure to pollutants, such as plant emissions and mercury, urban versus rural residence, and vitamin D deficiency (Kinney, Barch, Chayka, Napoleon, & Munir, 2009).

In the late 1990s, a prestigious medical journal published an article purportedly showing that autism is triggered by the MMR (measles, mumps, and rubella) vaccine. These findings were very controversial and drew a great deal of attention, sparking an international forum on whether children should be vaccinated. In a shocking turn of events, some years later the article was retracted by the journal that had published it after accusations of fraud on the part of the lead researcher. Despite the retraction, the reporting in popular media led to concerns about a possible link between vaccines and autism persisting. A recent survey of parents, for example, found that roughly a third of respondents expressed such a concern (Kennedy, LaVail, Nowak, Basket, & Landry, 2011); and perhaps fearing that their children would develop autism, more than 10% of parents of young children refuse or delay vaccinations (Dempsey et al., 2011). Some parents of children with autism mounted a campaign against scientists who refuted the vaccine-autism link. Even politicians and several well-known celebrities weighed in; for example, actress Jenny McCarthy (who believed that a vaccination caused her son’s autism) co-authored a book on the matter. However, there is no scientific evidence that a link exists between autism and vaccinations (Hughes, 2007). Indeed, a recent study compared the vaccination histories of 256 children with autism spectrum disorder with that of 752 control children across three time periods during their first two years of life (birth to 3 months, birth to 7 months, and birth to 2 years) (DeStefano, Price, & Weintraub, 2013). At the time of the study, the children were between 6 and 13 years old, and their prior vaccination records were obtained. Because vaccines contain immunogens (substances that fight infections), the investigators examined medical records to see how many immunogens children received to determine if those children who received more immunogens were at greater risk for developing autism spectrum disorder. The results of this study, a portion of which are shown in Figure 1 (and table 1), clearly demonstrate that the quantity of immunogens from vaccines received during the first two years of life were not at all related to the development of autism spectrum disorder. There is not a relationship between vaccinations and autism spectrum disorders. 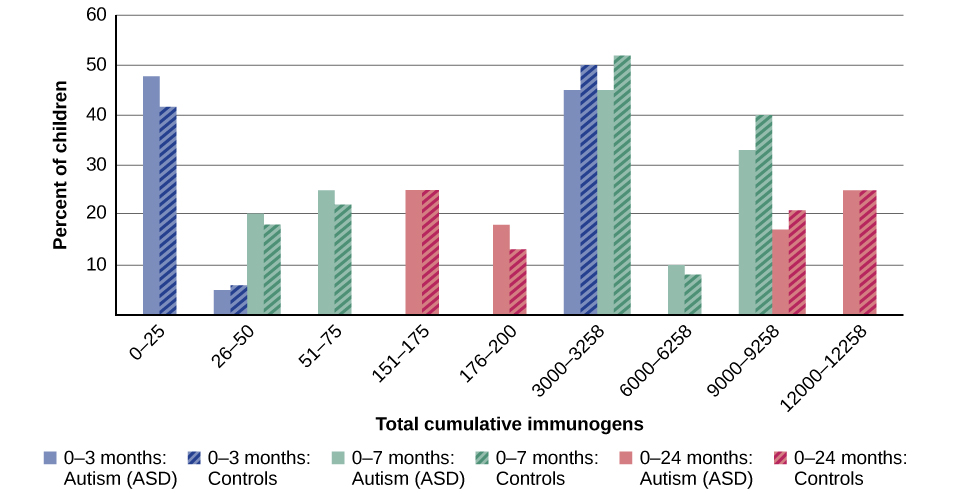 Figure 1. In terms of their exposure to immunogens in vaccines, overall, there is not a significant difference between children with autism spectrum disorder and their age-matched controls without the disorder (DeStefano et al., 2013).

Why does concern over vaccines and autism spectrum disorder persist? Since the proliferation of the Internet in the 1990s, parents have been constantly bombarded with online information that can become magnified and take on a life of its own. The enormous volume of electronic information pertaining to autism spectrum disorder, combined with how difficult it can be to grasp complex scientific concepts, can make separating good research from bad challenging (Downs, 2008). Notably, the study that fueled the controversy reported that 8 out of 12 children—according to their parents—developed symptoms consistent with autism spectrum disorder shortly after receiving a vaccination. To conclude that vaccines cause autism spectrum disorder on this basis, as many did, is clearly incorrect for a number of reasons, not the least of which is because correlation does not imply causation, as you’ve learned.

Additionally, as was the case with diet and ADHD in the 1970s, the notion that autism spectrum disorder is caused by vaccinations is appealing to some because it provides a simple explanation for this condition. Like all disorders, however, there are no simple explanations for autism spectrum disorder. Although the research discussed above has shed some light on its causes, science is still a long way from complete understanding of the disorder.

autism spectrum disorder: childhood disorder characterized by deficits in social interaction and communication, and repetitive patterns of behavior or interests
neurodevelopmental disorder: one of the disorders that are first diagnosed in childhood and involve developmental problems in academic, intellectual, social functioning