Does the name Ivan Pavlov ring a bell? Even if you are new to the study of psychology, chances are that you have heard of Pavlov and his famous dogs.

Pavlov (1849–1936), a Russian scientist, performed extensive research on dogs and is best known for his experiments in classical conditioning (Figure 1). As we discussed briefly in the previous section, classical conditioning is a process by which we learn to associate stimuli and, consequently, to anticipate events.

Pavlov came to his conclusions about how learning occurs completely by accident. Pavlov was a physiologist, not a psychologist. Physiologists study the life processes of organisms, from the molecular level to the level of cells, organ systems, and entire organisms. Pavlov’s area of interest was the digestive system (Hunt, 2007). In his studies with dogs, Pavlov measured the amount of saliva produced in response to various foods. Over time, Pavlov (1927) observed that the dogs began to salivate not only at the taste of food, but also at the sight of food, at the sight of an empty food bowl, and even at the sound of the laboratory assistants’ footsteps. Salivating to food in the mouth is reflexive, so no learning is involved. However, dogs don’t naturally salivate at the sight of an empty bowl or the sound of footsteps.

These unusual responses intrigued Pavlov, and he wondered what accounted for what he called the dogs’ “psychic secretions” (Pavlov, 1927). To explore this phenomenon in an objective manner, Pavlov designed a series of carefully controlled experiments to see which stimuli would cause the dogs to salivate. He was able to train the dogs to salivate in response to stimuli that clearly had nothing to do with food, such as the sound of a bell, a light, and a touch on the leg. Through his experiments, Pavlov realized that an organism has two types of responses to its environment: (1) unconditioned (unlearned) responses, or reflexes, and (2) conditioned (learned) responses.

In classical conditioning, a neutral stimulus is presented immediately before an unconditioned stimulus. Pavlov would sound a tone (like ringing a bell) and then give the dogs the meat powder (Figure 2). The tone was the neutral stimulus (NS), which is a stimulus that does not naturally elicit a response. Prior to conditioning, the dogs did not salivate when they just heard the tone because the tone had no association for the dogs. Quite simply this pairing means:

See if you can identify all of the “parts” of a classical conditioning situation in the following questions.

View the following video to learn more about Pavlov and his dogs:

You can view the transcript for “Classical Conditioning – Ivan Pavlov” here (opens in new window).

Consider another example of classical conditioning. Let’s say you have a cat named Tiger, who is quite spoiled. You keep her food in a separate cabinet, and you also have a special electric can opener that you use only to open cans of cat food. For every meal, Tiger hears the distinctive sound of the electric can opener (“zzhzhz”) and then gets her food. Tiger quickly learns that when she hears “zzhzhz” she is about to get fed. What do you think Tiger does when she hears the electric can opener? She will likely get excited and run to where you are preparing her food. This is an example of classical conditioning. In this case, what are the UCS, CS, UCR, and CR?

What if the cabinet holding Tiger’s food becomes squeaky? In that case, Tiger hears “squeak” (the cabinet), “zzhzhz” (the electric can opener), and then she gets her food. Tiger will learn to get excited when she hears the “squeak” of the cabinet. Pairing a new neutral stimulus (“squeak”) with the conditioned stimulus (“zzhzhz”) is called higher-order conditioning, or second-order conditioning. This means you are using the conditioned stimulus of the can opener to condition another stimulus: the squeaky cabinet (Figure 3). It is hard to achieve anything above second-order conditioning. For example, if you ring a bell, open the cabinet (“squeak”), use the can opener (“zzhzhz”), and then feed Tiger, Tiger will likely never get excited when hearing the bell alone. 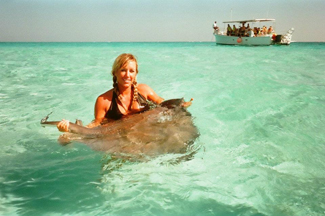 Figure 4. Kate holds a southern stingray at Stingray City in the Cayman Islands. These stingrays have been classically conditioned to associate the sound of a boat motor with food provided by tourists. (credit: Kathryn Dumper)

Kate and her husband Scott recently vacationed in the Cayman Islands, and booked a boat tour to Stingray City, where they could feed and swim with the southern stingrays. The boat captain explained how the normally solitary stingrays have become accustomed to interacting with humans. About 40 years ago, fishermen began to clean fish and conch (unconditioned stimulus) at a particular sandbar near a barrier reef, and large numbers of stingrays would swim in to eat (unconditioned response) what the fishermen threw into the water; this continued for years. By the late 1980s, word of the large group of stingrays spread among scuba divers, who then started feeding them by hand. Over time, the southern stingrays in the area were classically conditioned much like Pavlov’s dogs. When they hear the sound of a boat engine (neutral stimulus that becomes a conditioned stimulus), they know that they will get to eat (conditioned response).

As soon as Kate and Scott reached Stingray City, over two dozen stingrays surrounded their tour boat. The couple slipped into the water with bags of squid, the stingrays’ favorite treat. The swarm of stingrays bumped and rubbed up against their legs like hungry cats (Figure 4). Kate and Scott were able to feed, pet, and even kiss (for luck) these amazing creatures. Then all the squid was gone, and so were the stingrays.

Classical conditioning also applies to humans, even babies. For example, Sara buys formula in blue canisters for her six-month-old daughter, Angelina. Whenever Sara takes out a formula container, Angelina gets excited, tries to reach toward the food, and most likely salivates. Why does Angelina get excited when she sees the formula canister? What are the UCS, CS, UCR, and CR here?

For a humorous look at conditioning, you can watch an example from the television show The Office. Jim conducts an experiment in which he offers Dwight a breath mint every time Jim’s computer makes a specific sound. After repeating this several times, he eventually conditions Dwight to automatically expect a breath mint upon hearing that sound.  See if you can identify the NS, UCS, UCR, CS, and CR.

Review the classical conditioning concepts yet again by walking through Pavlov’s research in the following interactive: