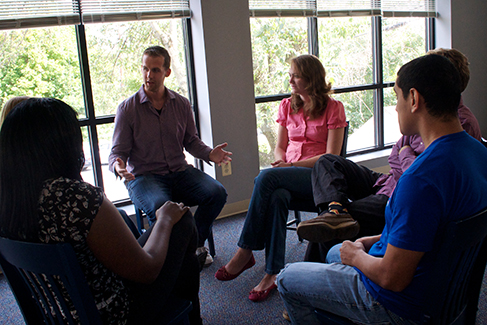 In group therapy, a clinician meets together with several clients with similar problems (Figure 1). When children are placed in group therapy, it is particularly important to match clients for age and problems. One benefit of group therapy is that it can help decrease a client’s shame and isolation about a problem while offering needed support, both from the therapist and other members of the group (American Psychological Association, 2014). A nine-year-old sexual abuse victim, for example, may feel very embarrassed and ashamed. If he is placed in a group with other sexually abused boys, he will realize that he is not alone. A child struggling with poor social skills would likely benefit from a group with a specific curriculum to foster special skills. A woman suffering from post-partum depression could feel less guilty and more supported by being in a group with similar women.

Group therapy also has some specific limitations. Members of the group may be afraid to speak in front of other people because sharing secrets and problems with complete strangers can be stressful and overwhelming. There may be personality clashes and arguments among group members. There could also be concerns about confidentiality: Someone from the group might share what another participant said to people outside of the group.

Another benefit of group therapy is that members can confront each other about their patterns. For those with some types of problems, such as sexual abusers, group therapy is the recommended treatment. Group treatment for this population is considered to have several benefits:

Groups that have a strong educational component are called psycho-educational groups. For example, a group for children whose parents have cancer might discuss in depth what cancer is, types of treatment for cancer, and the side effects of treatments, such as hair loss. Often, group therapy sessions with children take place in school. They are led by a school counselor, a school psychologist, or a school social worker. Groups might focus on test anxiety, social isolation, self-esteem, bullying, or school failure (Shechtman, 2002). Whether the group is held in school or in a clinician’s office, group therapy has been found to be effective with children facing numerous kinds of challenges (Shechtman, 2002).

During a group session, the entire group could reflect on an individual’s problem or difficulties, and others might disclose what they have done in that situation. When a clinician is facilitating a group, the focus is always on making sure that everyone benefits and participates in the group and that no one person is the focus of the entire session. Groups can be organized in various ways: some have an overarching theme or purpose, some are time-limited, some have open membership that allows people to come and go, and some are closed. Some groups are structured with planned activities and goals, while others are unstructured: There is no specific plan, and group members themselves decide how the group will spend its time and on what goals it will focus. This can become a complex and emotionally charged process, but it is also an opportunity for personal growth (Page & Berkow, 1994).

Couples therapy involves two people in an intimate relationship who are having difficulties and are trying to resolve them (Figure 2). The couple may be dating, partnered, engaged, or married. The primary therapeutic orientation used in couples counseling is cognitive-behavioral therapy (Rathus & Sanderson, 1999). Couples meet with a therapist to discuss conflicts and/or aspects of their relationship that they want to change. The therapist helps them see how their individual backgrounds, beliefs, and actions are affecting their relationship. Often, a therapist tries to help the couple resolve these problems, as well as implement strategies that will lead to a healthier and happier relationship, such as how to listen, how to argue, and how to express feelings. However, sometimes, after working with a therapist, a couple will realize that they are too incompatible and will decide to separate. Some couples seek therapy to work out their problems, while others attend therapy to determine whether staying together is the best solution. Counseling couples in a high-conflict and volatile relationship can be difficult. In fact, psychologists Peter Pearson and Ellyn Bader, who founded the Couples Institute in Palo Alto, California, have compared the experience of the clinician in couples’ therapy to be like “piloting a helicopter in a hurricane” (Weil, 2012, para. 7).

Family therapy is a special form of group therapy, consisting of one or more families. Although there are many theoretical orientations in family therapy, one of the most predominant is the systems approach. The family is viewed as an organized system, and each individual within the family is a contributing member who creates and maintains processes within the system that shape behavior (Minuchin, 1985). Each member of the family influences and is influenced by the others. The goal of this approach is to enhance the growth of each family member as well as that of the family as a whole.

Often, dysfunctional patterns of communication that develop between family members can lead to conflict. A family with this dynamic might wish to attend therapy together rather than individually. In many cases, one member of the family has problems that detrimentally affect everyone. For example, a mother’s depression, teen daughter’s eating disorder, or father’s alcohol dependence could affect all members of the family. The therapist would work with all members of the family to help them cope with the issue, and to encourage resolution and growth in the case of the individual family member with the problem.

With family therapy, the nuclear family (i.e., parents and children) or the nuclear family plus whoever lives in the household (e.g., grandparent) come into treatment. Family therapists work with the whole family unit to heal the family. There are several different types of family therapy. In structural family therapy, the therapist examines and discusses the boundaries and structure of the family: who makes the rules, who sleeps in the bed with whom, how decisions are made, and what are the boundaries within the family. In some families, the parents do not work together to make rules, or one parent may undermine the other, leading the children to act out. The therapist helps them resolve these issues and learn to communicate more effectively.

Watch this video to learn more about a structural family session.

In strategic family therapy, the goal is to address specific problems within the family that can be dealt with in a relatively short amount of time. Typically, the therapist would guide what happens in the therapy session and design a detailed approach to resolving each member’s problem (Madanes, 1991).

Review various types of psychotherapy in the following interactive:

couples therapy: two people in an intimate relationship, such as husband and wife, who are having difficulties and are trying to resolve them with therapy
family therapy: special form of group therapy consisting of one or more families
group therapy: treatment modality in which 5–10 people with the same issue or concern meet together with a trained clinician
strategic family therapy: therapist guides the therapy sessions and develops treatment plans for each family member for specific problems that can addressed in a short amount of time
structural family therapy: therapist examines and discusses with the family the boundaries and structure of the family: who makes the rules, who sleeps in the bed with whom, how decisions are made, and what are the boundaries within the family