Highlighting or underlining potentially important parts of a text is not a very effective study technique.

You would be better off spending your time on a more effective study technique, like taking practice tests. 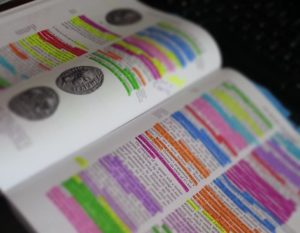 You’ve probably bought a used textbook that looked like the one above – marked up endlessly with various colors of highlighters.  Maybe you’ve even created one like this yourself! You would think that highlighting the important parts of what you’re reading would help emphasize to your brain that these are the things it should pay attention to.  Unfortunately, this turns out not to be the case.

As often happens in studies, the researchers found the occasional exception to this rule. For example, if students are explicitly taught how to highlight and are assigned highlighting practice and then given feedback on the quality of their highlighting, highlighting can improve learning. But they also found situations where highlighting actually hurts students’ learning. For example, highlighting has been shown to harm students’ performance on higher-level thinking problems, like questions that require students to make inferences.

In the end, the researchers rated highlighting as having “low utility” and recommended that students use their limited study time on study techniques that are more effective, like taking practice tests (which, after reviewing the research, they rated as “high utility”). So be sure to use the Show What You Know, Practice, and Self Check opportunities throughout this course!